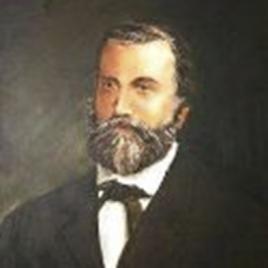 Born in Charleston, South Carolina, to parents who had immigrated from Bordeaux, France, Giraud was educated at Mount St. Mary’s College, in Maryland, where he also taught for a brief time upon graduation. He then studied architecture and engineering in Paris, France, before returning to San Antonio, Texas, where his family had moved circa 1847. There Giraud was active as a surveyor, engineer, and architect, eventually becoming the city’s mayor from 1872 to 1875.

In San Antonio, Giraud was the architect for St. Mary’s Church and for portions of St. Mary’s University, and it was according to his design that the original convent building at the Ursuline Academy was built (with construction beginning in 1848). He also served as the city engineer from 1849 to 1853. In 1851, he was invited by the governor to develop plans for a statehouse in Austin, but his design was ultimately rejected. That same year, Giraud surveyed the boundaries for San Pedro Springs Park in San Antonio, inscribing a “square around the springs . . . being 518 varas [1438.8 feet] from east to west and 550 varas [1527.7 feet] from north to south.” The area had been granted as public land by the King of Spain in 1729, making it the second-oldest public square in the United States. In 1852 Giraud completed a cadastral map of San Antonio (the “Plat of the City Tract of San Antonio de Bexar”), which faithfully recorded property lines, units of ownership, roads, rivers, and creeks. After serving a term as alderman from 1857 to 1858, he was charged with the reconstruction of San Fernando Cathedral, which began in 1868. Giraud died on May 8, 1877, and is buried in San Fernando Cemetery No. 1.