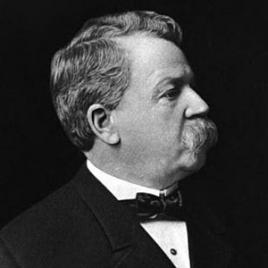 Born in Blue Hill, Maine, Clough attended Blue Hill Academy and worked as a draftsman for his father, a shipbuilder. Upon his father’s death in 1863, he moved to Boston, where he studied architecture in the office of Snell & Gregerson. Clough remained at the firm until 1869, when he left to establish his own architectural practice. Although he was appointed Boston’s first City Architect in 1874, he began designing public schools in 1872. During this time Clough oversaw the design, construction, and renovation of numerous prominent public structures throughout Boston, including the Boston Latin School, Boston English High and Latin School (now demolished) in the South End, Prince School (now condominiums) in the Back Bay, the Suffolk County Courthouse in Pemberton Square, and Congress Street Fire Station. He also submitted the first plans to be accepted for the Boston Public Library in 1880, and oversaw the first restoration of the Massachusetts State House in 1881.  Clough is credited with designing over 25 schools for the City of Boston, several local churches, and many other municipal buildings and public charitable institutions throughout the Boston area. He had great influence in Boston, where he is credited with introducing a German system of architecture which involved constructing buildings around open courts to allow for internal light and ventilation.

Upon his removal from the position of City Architect in 1883, Clough returned to private practice, designing numerous public buildings and residences in Blue Hill, Maine. He established the firm Clough & Wardner with Herbert Wardner in 1905, which designed several residences in Boston and Brookline, and libraries, schools, and churches across the northeast. Clough died at the age of 67 in Brookline, Massachusetts, and was buried at Seaside Cemetery in Blue Hill, Maine. 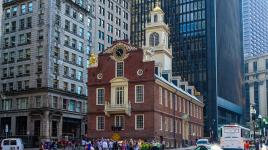