The nation's designed landscape heritage is rich, varied and fascinating—and often undervalued—especially in our cities where the Harvard educator and landscape architect Hideo Sasaki saw a great design opportunity for the "betterment of [the] human environment."

The Utopian sounding aspiration espoused above by Sasaki informed his firm's very real designs for the innovative and significant Modernist public landscapes at Constitution Plaza (Hartford, Connecticut), Christian Science Center (Boston) and Washington Square Village and Greenacre Park (New York City), among others. They reflect Sasaki's desire to create urban oases, landscapes that can restore the human spirit. Interiors magazine (February 1958) wrote of the Washington Square Village design that it "solves many of the problems of present day city living by providing light, air, color, spaciousness, landscaping and privacy within minutes of Midtown Manhattan."

Unfortunately, the nationally-significant, unique and therefore irreplaceable landscapes at Washington Square Village and Christian Science Center (completed in 1972) face uncertain futures owing to construction and development pressures. The 12-acre Washington Square Village (included on the 2009 Landslide list), with its one and one half-acre garden, and the 25-acre European-inspired, classic urban space at Christian Science Center, with its 686-foot long reflecting pool, are still revolutionary, sophisticated, tightly-unified urban compositions. In a recent conversation, Gary Hilderbrand, a landscape architect, former Sasaki employee (1985-1991), and adjunct professor at Harvard, said Christian Science Center is "one of the few recognizably great achievements of modernist city building in North America." 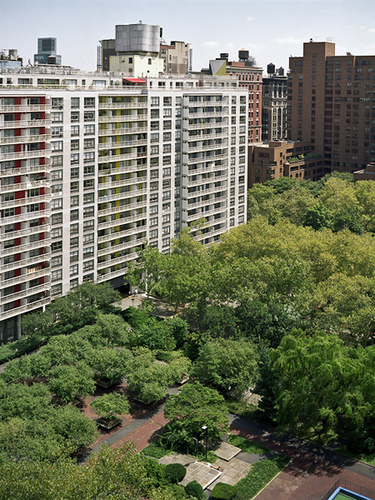 Also unfortunate—especially so because it's no surprise—media coverage of the proposed tower in the Washington Square Village landscape includes zero mention of the Sasaki firm in either the New York Times (Robin Pogrebin, June 18, 2010), or the Wall Street Journal (Craig Karmin, June 17, 2010). Ditto the Boston Globe coverage (Matt Byrne, May 19, 2010), for work at the Christian Science Center. The Journal noted that Washington Square Village residents feared the loss of "green space and trees," but quotes Mark Husser, a partner of Grimshaw Architects, who says the tower they've designed for the site "would be built with sensitivity to the existing [I. M. Pei] buildings." Why doesn't this sensitivity translate to the landscape?

Three buildings—one more than 500-feet tall—are proposed for the Christian Science Center along with a redesign of the plaza and the reflecting pool, which would be shortened and have a path cut across it. Stuart Dawson, the Sasaki firm's original project designer on the Christian Science Center, was videotaped at the site for a forthcoming oral history about his life and work (below and on  TCLF’s YouTube channel). Dawson says of the Christian Science Center, “it seems like it has a certain landmark quality not unlike a building, [and] that should trigger some kind of landmark status.” It appears that the Boston Landmarks Commission agrees – they are currently considering the issue and has just released a report  (download PDF) where they recommend the landmark designation of the Center. A public hearing for the Center’s consideration as a Boston Landmark will be held on July 13, 2010 at 5:45 pm in Room 900, Boston City Hall.

As Gary Hilderbrand also said in our conversation, "change is inevitable." I agree, but would add that there has to be context. Informed decision-making requires an understanding, evaluation and valuing of the contributions and design intent of landscape architects and architects. It’s about change and continuity. 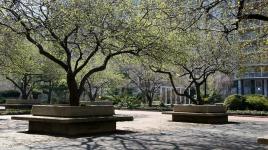 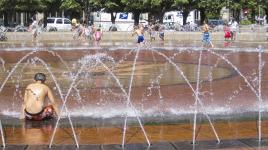