Known as Sky City, the ancient Pueblo of Acoma is located 60 miles west of Albuquerque, New Mexico. The 70-acre village, together with its famed San Esteban del Rey Mission, is located on top of a high sandstone mesa and inhabited year-round by fewer than 50 of the approximately 3000 people who occupy Acoma tribal lands. However, most Acoma families maintain houses in the village. The site is a National Historic Monument and is owned by the Acoma people. The mission, unoccupied and used only on feast days for traditional dances and masses, is also owned by the tribe. As many as 500,000 people per year visit the village site and provide a portion of the revenue needed to maintain the endangered structures. A new Acoma Pueblo Cultural Center currently being constructed at the base of the mesa will archive significant Acoma artifacts and documents, provide space for cultural programs and information to visitors. 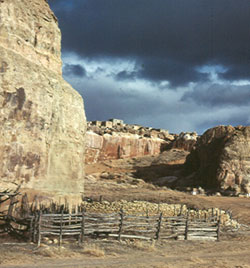 The Pueblo of Acoma, NM, continuously inhabited since the late 1300s, is one of the oldest urban settlements the United States. Located on a mesa seven thousand feet above sea level, the architecture can be traced back to the early 17th century where it stood isolated and defensible in its magnificent arid landscape. The ruins of the original village, destroyed in 1599 by Spanish soldiers, are known to exist beneath the present village and its mission of San Esteban del Rey.

The earliest European contact with Acoma in the 16th century yielded descriptions of a rock mesa called Acuco. The Europeans reported seeing a "village of about 200 houses, from two to four stories high; with cornfields and cisterns on the summit; with cotton, deerskin and buffalo hide garments; with domesticated turkeys, quantities of turquoise, etc." (Leslie White, The Acoma Indians, Bureau of American Ethnology, Annual Report 47, 1929-30) The stepped houses, constructed from indigenous materials, were set in continuous rows facing slightly east of south. The village was razed in 1599 by canon fire following a clash between Spanish soldiers and the Acomas.

The rebuilding of the village, circa 1640, was guided by Fray Juan Ramirez of Oaxaca. The new mission, begun in 1629, was built over the southern-most part of the original village. The buried archeology can occasionally be seen after heavy rains and wind. Although the exact location of the razed village has not been determined, the three-story stepped houses with kivas facing east of south are visible. The fields below are still dry farmed with crops of corn, beans and squash. Water cisterns, located on top of the mesa, are the only source of water. There is no electrical power. Thus, the 17th century village is still present today. 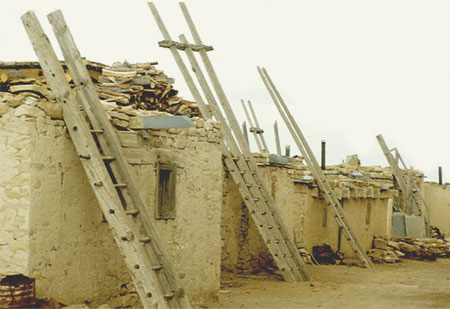 The history of Acoma is told by stories that are passed from grandfathers to children through the use of the Keres language and is cherished as intimate knowledge. However, the written histories are always told through the outsider's point of view, usually beginning with the arrival of the Spanish in the 16th century. These written histories are built on values frequently foreign to the Acoma people. Conflicting viewpoints are similar to those that have arisen from outside interest in the Acoma settlement. With the establishment of the Acoma Historic Preservation Office, recognition of the multiple viewpoints about the Acoma culture has led to an effort to share their views with others in a way that doesn't compromise their beliefs.

One of the earliest Pueblo churches in New Mexico, San Esteban is thought to be one of the largest, most architecturally perfect of the single-nave fortress churches. Begun in 1629, the 21,000 square foot mission complex, consisting of the church, convento (priest's living quarters), and campo santo (graveyard in front of church), took 14 years to complete. All materials - clays, stone, wood, nails, grasses, yucca, water and selenite - were carried by hand to the top of the 350 ft. high mesa. Sacred thirty-five foot long vigas (log roof beams) were transported from 30 miles away and, if dropped, were replaced by fresh ones.

The lands of Acoma represent one of the few environments in the United States that retains its inseparable ties between the people and the land. All places in the Acoma landscape are identified by their significance to cultural memory. All attributes of the land are sacred to the people, having an existence that is not separate from its inhabitants. Those who violate this condition are censored and required to pay a penalty. For the Acoma people, their identity symbolises the cultural landscape, and its preservation is key to their existence. The Keres language also is rapidly being lost, and with it, a connection to the land that could ultimately sever the intimate ties that the people have with their culture.

Acoma is a working landscape. Its people nourish the land, conserving it through ritual and an insider's knowledge of its resources. Rituals are performed in daily life to sustain a living relationship with the past. For example, the Field Chiefs, formerly War Chiefs, who have dwellings within the mission perform seasonally related agricultural rituals and pray for the world. As elders, they safeguard the land and activities of the old village and are joined by the citizens of Acoma in daily responsibilities that benefit the community as a whole. The tribal government has little authority here and must make requests to the Field Chiefs who oversee activities in this environment.

The authenticity of the site is underscored by the centuries-old dedication to land and to the integrity of the village and its mission. The motives for this dedication lie in the people's understanding of the living presence of their ancestors and their intimate bond with the land and its places. For the Acoma people, the making of a settlement is a continuing process, unchanged since the first encounter with the "place that was prepared." The act of building is an innate part of each person's life, a transformation of the land itself through dwelling with the land. Until twenty years ago, very few changes were introduced to the traditional methods of building. With increasing availability of funds generated in part by the Casino economy, many families are building additions to their old houses. Some are building entirely new structures, using modern materials and construction methods that not only are destroying the character of the village, but also contributing to the destruction of the old buildings made from materials found on Acoma lands. Historically, materials were extracted only after builders made appropriate communication with the lands for the removal of materials. 'Fast building' technology is replacing the 'soft technology' of stone and adobe. Recent restorations have shortened the life of some of the village's most fragile and cherished structures. Today, these houses may be considered structurally dangerous. If they are demolished, the village will lose some of its most representative structures. 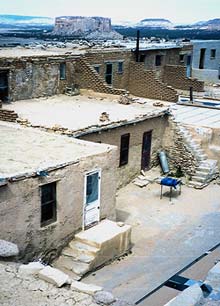 The increasing severance of language, place and tradition is eroding the interdependence of all three, resulting in a great loss to the Acoma cultural landscape. The Acoma people recognize this problem: the loss of the traditional language is a loss of cultural cohesiveness; the loss of traditional ways of using materials for dwelling will sever the physical connection between the people and the land. Once lost, these people/place connections are seldom restored. The fragility of the village itself poses a real and imminent possibility of a lost connection with the land.

Over the past five years, a significant change has occurred in the relations of the Acoma people to the outside world. Formally protective of all aspects of tribal life, the Acomas have become cautiously open to outside assistance for the preservation of their National Monument. Nominating San Esteban Mission as a Save Americas Treasures site in 2000, and recognition in 2002 from The World Monuments Watch brought public attention to Acoma. Because of this recognition, the Acoma people have embraced preservation as a way of saving their cultural landscape. They now have a vision for the future as one of reclamation rather than one of loss. Public recognition that Acoma village and its mesa site is an endangered cultural landscape supports the Acoma belief of the interconnectedness of the environment, structures and the landscape. 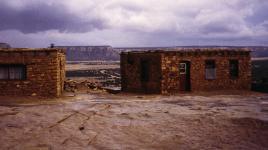 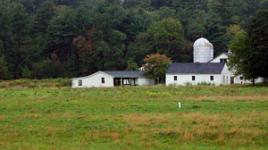