The Lawrence Halprin Landscape Conservancy, Restoration Master Plan + Tree Rejuvenation Project, Portland, Oregon is a multi-faceted project that will restore and protect an important cultural landscape and landmark urban design. This privately initiated project for the preservation of public space is a model of private/public partnerships.

Forty years ago, the City of Portland initiated an ambitious plan of urban redevelopment of the 20-block area immediately south of its downtown core, called the South Auditorium District. Designed to attract middle-class residents to the central city, the plan has proved to be one of the most successful redevelopment projects of the 1960's.

At the time of their creation, the parks provided a refuge in the city, combining aspects of European public plazas with natural areas. They proved that residing in the central city could be a dignified and desirable alternative to the suburbs, and created a movement of middle class back to the central city twenty years ahead of other US cities. The parks fostered a rethinking about Portland's central city core that continues to this day. 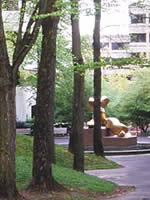 The South Auditorium District has, at its core, a linked series of public spaces designed by the office of Lawrence Halprin. The Halprin-designed parks are essentially three linked garden rooms forming a connecting realm of public space between the buildings of the South Auditorium Redevelopment District and the Central City to the north. From the south to the north, in a flowing sequence of fountains, paths, and plazas, the experience of the Halprin parks in Portland begins at the "Source Fountain", which leads to the Lovejoy Fountain, with forms derived from the high desert, on to Pettygrove Park, with forms derived from meandering valley streams and meadows, and finally to the Forecourt Fountain, which recalls the mountains with its dramatic falls and alpine plantings. They embody Halprin's philosophy that sculptural and landscape forms recognize nature and natural processes as a "driving force" but that the design does not "imitate nature."

In the 1981 Process Architecture: The Sketchbooks of Lawrence Halprin, Halprin writes, "In Portland I attempted to do 2 things: The first of these was to develop a long eight block sequence of open spaces. promenades, nodes of plazas & parks with a mix of public space & private space interwoven.Along this progression are a diversity of uses - housing, apartments, shops, restaurants, offices, auditorium. The space is choreographed for movement with nodes for quiet & contemplation, action & inaction, hard & soft, YIN & Yang.

The second basic approach was to bring into the heart of downtown activities which related in a very real way to the environment of the Portland area-the Columbia river, the Cascade mountains, the streams, rivers & mountain meadows. These symbolic elements are very much a part of Portlanders' psyche-they glory in their natural environment & escape to it as often as possible. But it seemed important to acknowledge the urban character of these places as well as their origins-so the Designs deal with the origins of form: the process by which natural form is created. The fountains & plazas are formed to link up with nature's process not copy her.

Finally these places were for the first time designed to be used to be participatory NOT just to look at - - they say COME IN not stay off."

Ian McHarg described the project this way: "Halprin designed this fabulous creation in Portland where there was such a vitality of water, such a vitality of different spaces-that it became a sinecure for the whole city. I mean, people went to great lengths to go there, they got married in the bloody place; they had celebrations in the place. And so it was always animated with people. He was the first person, worldwide, to provide a plaza worth going to."

Forty years of hard use has had its effect on the Halprin Parks.
There has been a slow but relentless loss of the quality and the condition of the plant materials. The condition of the landscape has deteriorated—trees have died or have been removed; have been allowed to grow too close together; trees have been attacked by disease, and some of the fountains no longer flow.

John Russell, a local real estate developer whose offices overlook the parks, decided to act upon his conviction that these landscapes were worth the investment of his time and resources. In the summer of 2001 Mr. Russell retained Urbsworks, Inc. to oversee a survey of existing conditions, research the original design documents, meet with Halprin's office to ascertain the design intent, and develop an implementation plan for the ultimate restoration of these iconic pieces of American landscape design. He says "This plan will be the culmination of a dream of mine going back at least a decade that these parks have the 'tender loving care' that they deserve."

Marcy McInelly, President of Urbsworks, Inc., directed the research and design of the project. She says, "I wanted to create a plan, a beautiful document in itself, that is appreciative of Halprin's vision and his time, and is engaging to people uninformed or unfamiliar. I also wanted the plan to make clear the importance of Halprin's legacy in Portland and how Halprin fits into the contemporary cultural/urban landscape."

The design team, led by Ms. McInelly and assisted by landscape architect Steve Koch, has met with Lawrence Halprin several times over the last 18 months. Their goal has been to understand Halprin's original vision for the eight-block area. Their challenge has been to develop a plan for the rehabilitation of the parks to be implemented through a complex partnership of public and private entities. A pilot project, focused on rejuvenating the trees, is a model that balances design and placemaking with the goals of modern urban forestry. This specific plan for restoration, replacement and/or removal of trees meets the goal of maintaining healthy urban forests while restoring the original vision of quality of light, character, and function of the parks.

The long-term goal of the project, beyond the Tree Rejuvenation Pilot Project, is to create a Conservancy-type organization to maintain, enhance and build appreciation for the Halprin Landscapes.

People on this project

John Russell, President of Russell Development Company
John Russell received his MBA from Harvard Graduate School of Business Administration in 1969 and his Bachelor of Science in Naval Architecture from Webb Institute of Naval Architecture in 1968. He started his development company in 1979 with the design and construction of PacWest Center in downtown Portland designed by Hugh Stubbins Associates. For the last thirty years he has been an active member of many of the task forces and Commissions responsible for Central City reinvestment, including chairing the Mayor's Business Roundtable. He is currently chair of the Portland Development Commission, the redevelopment agency that redeveloped the South Auditorium Redevelopment District and commissioned Lawrence Halprin to design the landscape.

Marcy McInelly, AIA, Architect, President of Urbsworks, Inc.
Ms. McInelly founded Urbsworks, Inc. in 1995 to bring quality design and creative process management to the art of placemaking and the science of community building. 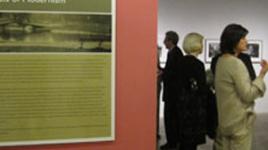