Washington, D.C. (May 14, 2019) - The Cultural Landscape Foundation (TCLF) today designated the Hirshhorn Sculpture Garden as a threatened and at-risk landscape as part of its Landslide program.  A proposed redesign would eradicate the work of landscape architect Lester Collins. The Hirshhorn Museum and Sculpture Garden was designed by architect Gordon Bunshaft with Skidmore, Owings & Merrill and opened in 1974. Following negative reviews (the New York Times described the Bunshaft-designed sculpture garden as “a gravel pit”), the Smithsonian engaged landscape architect Lester Collins to redesign the garden in 1977; the Collins design opened in 1981. The sculpture garden we see today, with the exception of diminished plantings, is largely the work of Lester Collins.

The Smithsonian Institution, which owns the Hirshhorn Museum and Sculpture Garden, now plans to redesign the sculpture garden to meet its programmatic needs. The internationally acclaimed Japanese artist Hiroshi Sugimoto, whose extraordinary and transcendent work was the subject of a masterfully installed exhibition at the Hirshhorn in 2006, has been named as the designer. The proposed redesign has triggered a Section 106 review in accordance with the National Historic Preservation Act (NHPA) because the Hirshhorn Museum and Sculpture Garden is a contributing feature of the National Mall Historic District and has itself been determined eligible for listing in the National Register of Historic Places. TCLF is an official consulting party to the Section 106 review.

The Section 106 process will determine if there are “adverse effects” on the sculpture garden from the proposed redesign and how those adverse effects should be addressed/mitigated.  For the purposes of this review, the Smithsonian’s Office of Planning, Design, and Construction has determined that the period of significance ends in 1974 with the opening of the museum.  The period of significance is important because it determines what is and, more importantly, what is not evaluated.  Because of the 1974 cutoff date, the Section 106 review would not take account of  potential adverse effects on Collins’ design (1977-81), which means much of the sculpture garden, the work of a recognized master landscape architect, could be lost.

In 2015, as a consultant to the Smithsonian, TCLF twice alerted Smithsonian officials that the Collins design was not properly recognized as part of the institution’s South Mall Campus Cultural Landscape Report, which guides planning issues.  Not until the initial Section 106 meeting on April 10, 2019, had it become clear that the Smithsonian still did not recognize Collins’ significant design contributions, which we believe are likely eligible for listing in the National Register of Historic Places.

After the sculpture garden was opened in 1974, it became evident that Bunshaft’s unrelenting, Brutalist landscape, sparsely planted and paved with gravel, was a deeply inhospitable environment in the Washington summers. Furthermore, the tiered design presented difficulties for the elderly, the physically challenged, and visitors with baby strollers who were unable to traverse the garden easily. Architectural critics were universally unimpressed by the garden.

In 1976 the Hirshhorn Museum began to plan for the redesign of the sculpture garden. Programmatically, the new garden would need to feature discrete, gallery-like spaces for sculpture; ramps for accessibility; new surfaces to replace the gravel; a comprehensive lighting design (ultimately engaging the celebrated theatrical lighting designer Jules Fisher); extensive shading; and, potentially, additional levels. Lester Collins, a well-known, Washington, D.C.-based landscape architect, who was a consultant to the Smithsonian’s Office of Horticulture, was commissioned to redesign the garden in 1977. He would work closely with James R. Buckler, the director of horticulture, on the project. First a graduate, then a faculty member, and later dean of the Department of Landscape Architecture at the Harvard Graduate School of Design, Collins was already known for his work on several public projects in the city, including Georgetown University, the U.S. Naval Academy, and the Smithsonian National Zoological Park. Collins’ most significant work, Innisfree in Millbrook, NY, which is featured on the cover of 100 Years, 100 Landscape Designs, by John Hill (Prestel, 2017), has recently been listed in the New York State Register of Historic Places.

Working within the existing footprint of Bunshaft’s garden, Collins transformed the “desert-like expanse” into a shaded, choreographed journey through an urban park. Predating the 1991 American Disabilities Act (ADA) Standards for Accessible Design by more than a decade, the redesign includes ramps and other features aimed to afford every user a dignified arrival and a comparable spatial experience.

The goal of Landslide, one of TCLF’s three core programs, is to draw immediate and lasting attention to threatened landscapes and unique features.  Through web-based news stories, traveling exhibitions, and print publications, Landslide reveals the value of these often forgotten landscapes. The program has also been instrumental in preventing the demolition of significant, designed landscapes, including the Russell Page-designed viewing garden at the Frick Collection in New York City, the Charlottesville Mall in Charlottesville, VA, Fort Negley Park in Nashville, TN, and many other sites.

The Cultural Landscape Foundation (TCLF) is a 501(c)(3) non-profit founded in 1998 to “connect people to places.” TCLF educates and engages the public to make our shared landscape heritage more visible, identify its value, and empower its stewards. Through its website, publishing, lectures and other events, TCLF broadens support and understanding for cultural landscapes. 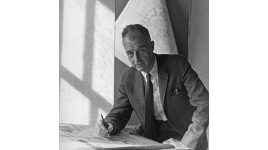