It Takes One: Birgit Urmson

It Takes One: Birgit Urmson 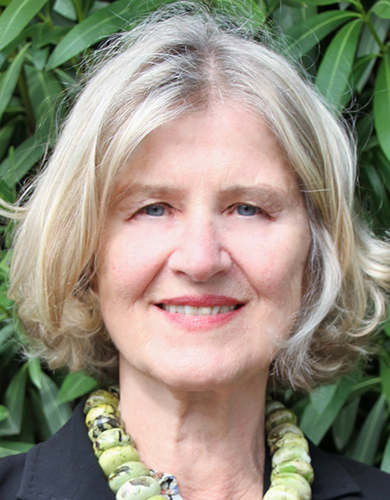 In her early work as a filmmaker she produced a video piece, “I am Eyes,” about how her autistic son perceives nature. She also produced a  documentary film, titled “A German Family History” (Eine Deutsche Familiengeschichte), for German TV Network, ZDF, which focused on her family’s experience of the National Socialist period. Urmson has been the artistic director of international film festivals held in San Francisco and Los Angeles, and she has authored several publications, including a novel, Germaine (on Germaine de Staël) . Her major work of the last decade, German and United States Second World War Military Cemeteries in Italy: Cultural Perspectives, focuses on funerary art and soldiers’ cemeteries abroad. She now teaches art-history at the UC Berkeley Extension and can be reached at  birgitrumson@berkeley.edu.

How did you become interested in the German and American military cemeteries in Italy?

Spending my youth in postwar Germany, I keenly felt my family’s losses. After the Berlin wall fell, I took it upon myself to uncover the story of one of my young uncles who went missing at age nineteen. Eventually, I discovered that during the Red Army’s final onslaught on Berlin, he and eleven other wounded prisoners were arbitrarily shot by a Russian officer and buried in a dung heap. Their common grave had been clandestinely dug at night by the elderly men of the village— in defiance of Russian orders. Although ashamed of the Nazi regime, at that moment, I became painfully aware of a soldier’s right to rest in peace. On the urging of a friend, I visited the German soldiers’ cemetery at the Futa-Pass in Tuscany, which deeply moved me by its expression. As an art historian who had lived her adult life in the United States, I naturally wondered how America commemorated its losses in the battles waged in Italy. The two splendid U.S. cemeteries at Impruneta (near Florence) and Anzio/Nettuno (near Rome) are a world apart from their German counterparts. I felt that juxtaposing these two extremes, in all their complexities, would make for a fascinating study. 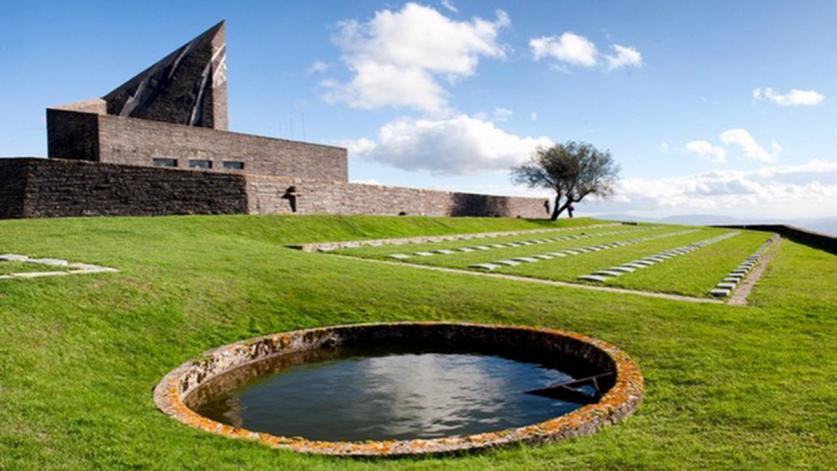 The book covers a lot of ground—from the choice of sites and managing intimate details of landscape projects to diplomatic maneuvering and the expressions of national values. Was it difficult to structure the book to encompass these transitions smoothly?

Yes. Developing a coherent narrative was a challenge that engaged me for several years. From the beginning, I realized that these cemeteries were not one-dimensional, either aesthetically or as a bearer of an ideological message, but rather represented multifaceted issues. I liken the challenge to re-assembling colors separated by a prism, putting them together again to make the whole.

The book indirectly compares “the Germanic tradition of dialoguing with nature" to U.S. cemeteries’ “control of nature.” How did you interpret the cultural attitudes embedded within these landscapes?

The German cultural attitude is best explained by Tacitus, the Roman historian, who describes Teutonic tribes venerating nature’s trees and stones and groves. This tradition, which treats nature as a metaphysical entity, is found in the romantics’ vision as well. For example, the works of the painter Caspar David Friedrich (1774-1840) depicts man defining himself through his subjective emotional response to nature. Archived memoranda by the designers of the cemetery at Futa Pass — German architect Oesterlen and landscape architect Rossow, show that their efforts were clearly based on this vision of nature. The landscape was to be ‘built into the cemetery’, rather than the cemetery into the landscape. Nature was omnipresent and its function was to console. Surrounded by the grandiose Apennine Mountains, the visitor’s experience will be private and might border on the metaphysical.

Conversely, the American cemeteries were conceived as elements distinct from the surrounding landscapes—pieces of idealized America inserted into foreign lands. The element of “precedence” figures prominently in the American mentality, and archives reveal that the setting of soldiers’ cemeteries within highly stylized landscapes for WW II cemeteries was an uncontested mandate. Per specifications, designs needed to be axial with a wide grassy mall recalling Washington, D.C. Laterally arranged grave fields, featuring geometrically arrayed, identical marble crosses for each grave, were to be shaded by trees and bisected by access pathways leading to the centrally located memorial. Views were to be clear and straight. Beaux-Arts landscapes and Classical architecture (both favored by American officials until the 1950s) were to complement each other. 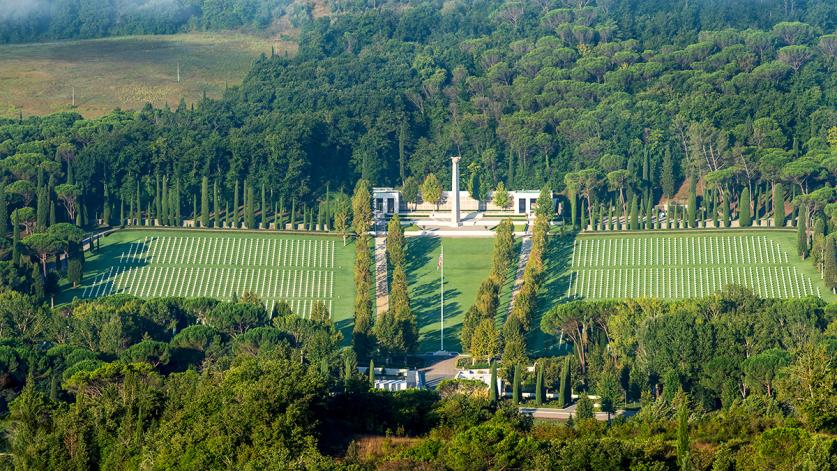 You claim that the U.S. government attempted to thwart American families’ wishes for the repatriation of their sons’ bodies. Why were these landscapes so important as to ignore the wishes of the soldiers’ families and imperil diplomatic relations with the Italian authorities?

President Lincoln, at Gettysburg, used the term “hallowed” to describe those buried under the actual Civil War battleground. In the aftermath WW II, the responsible agency (ABMC) had a clearly stated vision— by combining monuments and graves, erected on actual battlegrounds, the United States would “showcase” both its victory and global dominion. To achieve this end, it seems likely that repatriation was “unofficially” discouraged. It was this political meaning behind the landscape design that made the cemeteries so crucial. Meanwhile, not all Italians considered the U.S. cemeteries favorably. The Communist movement was a powerful political force in the immediate postwar period, and may Italians saw themselves as allies in the defeat of fascism. In other words, they did not wish to be considered a defeated and occupied country.

The book speaks about the ineffectual local opposition to the acquisition of land for American cemeteries. Yet when the American Battle Monuments Commission (ABMC) tried to override Italian riparian rights, they were unsuccessful. Why were the locals more successful in safeguarding their water rather than their land?

I recall nothing in archives that directly addresses the issue of property rights versus riparian rights but perhaps the answer lies in local politics. Water rights in Italy are just as sacrosanct as in any other Mediterranean country. The political economy of the region, where peasants lived on and worked land owned by others, was reformed shortly after war’s end. As a result, the baronial class lost much of its “clout” and was powerless to oppose the land grab. The workers, on the other hand, had been exposed to Communist anti-American propaganda and likely held that local authorities acceding to such expropriation demands were a form of humiliation. Hence, resistance on the part of local authorities with respect to granting water allotment would have been politically advantageous.

John Kellum Smith and Michael Rapuano’s design for the cemetery at Impruneta created a landscape for contemplation. This plan was superseded by the overarching vision of the American Battle Monuments Commission (ABMC). How much leeway were American designers given to interpret the war?

Smith served in both world wars and shared the view that a U.S. soldier’s death was a noble service to his nation. His Impruneta cemetery’s “Angel of Peace” sculpture emphasizes peace, while the cemetery’s “wall of the missing” is the center of the architectural complex and the end-point of the central sightline. Smith was able to choose the inscriptions independently, and the quotations for mercy, rest, and peace stand next to Pericles’s famous funerary speech, which depicts the soldiers’ deaths as noble. Rapuano’s landscape plan reveals his proficiency in “spatial aesthetics,” and the only point of contention was whether to fell a stand of trees outside the cemetery that rendered a sheltered view onto the whole. This is where designers clashed with the ABMC. Rapuano’s argument was based on aesthetics, and the ABMC, which wanted an unimpeded view from the road, prevailed. 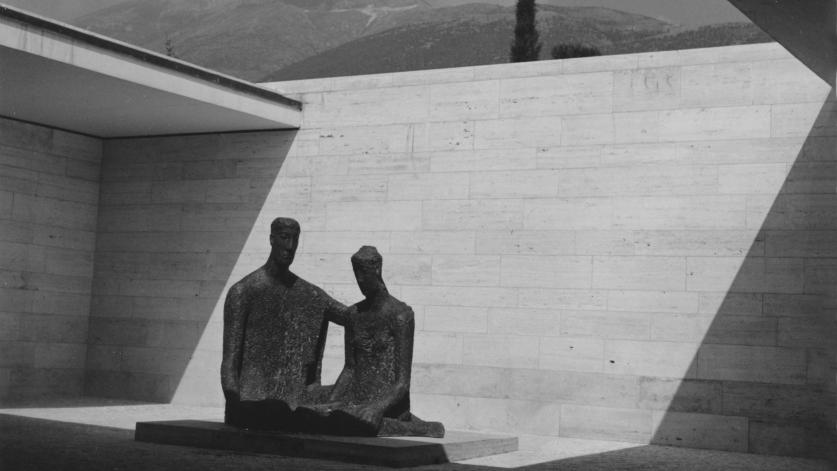 How did Germany’s postwar trajectory aid the shift in the agenda of its national monuments commission, the Volksbund Deutsche Kriegsgräberfürsorge (VDK)?

The German monuments commission's (known as Volksbund Deutsche Kriegsgräberfürsorge (VDK)) evolving aesthetics and ideology went hand-in-hand with Germany’s larger trajectory. Generally, the German search for moral renewal has been consistent with society becoming less religious and more pacifistic. This is mirrored in the government’s efforts as a civilized partner in the larger European identity and being a signatory to the Treaty of Rome (Römische Verträge, 1957) — one of the EU’s foundational documents. At war’s end, the VDK’s entire archives in Berlin had been lost to firebombing, leading the organization to reckon with a new beginning. The postwar period saw the VDK eventually turning toward younger, more contemporary designers and artists, such as Offenberg and Oesterlen. Germany’s progressive art of this period is also evident in theatre, literature, and music. Abstract art imbued with a pacifist message, which Nazi “experts” had labeled “degenerate”, was revived. This is visible in the sculptures at the Cassino/Caira cemetery, titled “Mourning and Consolation” (Trauer and Trost). Finally, it is important to note that the VDK was free from government funding and influence and hence needed to align itself with German postwar society in order to secure its funding from subscriptions and donations.

At the end of the book, you write about the stylistic stasis of American war memorials being broken by the Vietnam War Memorial, designed by Maya Lin, who is of Chinese-American lineage. How would you account for this change in attitude towards memorializing war?

World War II, nicknamed “the good war” by Studs Terkel, was truly a nationalizing experience for Americans. On the other hand, the Vietnam War challenged notions of duty, honor, and patriotism that the victorious WW II generation had held sacrosanct to that point. The Vietnam War was not “the good war,” but its fallen soldiers nevertheless deserve dignified commemoration. America found itself in moral conflict, not unlike Germany after WW II. The Vietnam Memorial was neither commissioned nor funded by the ABMC, but by a private initiative, not unlike the VDK. And, a jury of design professionals, some of them avowed pacifists, selected the design from among others submitted for the blind competition. I recall landscape architect Garrett Eckbo, a jury member, telling me of the jury’s excitement about Lin’s brilliant design. All the subsequent memorials in Washington, D.C., are, in my view, weak compared to Lin’s stroke of genius.