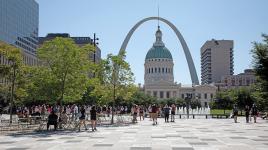 This 1.9-acre plaza, located immediately west of the Old Courthouse, was the first public space east of Eleventh Street developed along the Gateway Mall. In 1962 voters approved a bond issue enabling the creation of a public space on a single block, bound by Market, Seventh, Chestnut, and Broadway Streets. Named in honor of steel company executive, philanthropist, and athlete Harry Kiener, the plaza was planned by Stuart Mertz & Associates, with landscape architect Thomas Church as a consultant. Oriented along the east-west axis of the courthouse, respective linear and curved symmetrical paths terminated at a circular fountain in the western portion of the site, which featured a bronze figurative sculpture, “Olympic Runner,” by William Zorach. A 1987 addition incorporated the adjacent western block and included a sunken amphitheater framed by a pergola.

In 2009 Michael Van Valkenburgh Associates, Inc., won a competition to revitalize Gateway Arch National Park and Kiener Plaza.  While the firm honored Kiley’s design and material palette in the national park, seamlessly integrating modifications with the original design, they altered Kiener Plaza, replacing the original axial plan with a curvilinear one, meant to be observed from the ground and from above. Only two elements still respect the axial relationship with the Old Courthouse: a western planting bed enclosed by a continuous, circular bench and the “Olympic Runner,” sculpture, sited in a central, circular, sunken fountain. Densely planted biomorphic beds border the plaza’s north, east, and south edges, supporting play spaces and seating alcoves. While the sides that front the street are linear, those that face the interior of the plaza are sinuous, echoing the forms of the Kiley-designed lakes in Gateway National Park, and are lined with curvilinear, continuous benches. The eastern portion of the plaza is dominated by a gently sloping oval lawn, which is angled approximately 50 degrees on a northwest-southeastern axis and partially surrounded by 21 evenly spaced shade trees. The plaza is unified by an irregular mosaic of terrazzo pavers, chosen to match existing granite and marble blocks. Michael Van Valkenburgh Associates, Inc., working with multiple organizations including the CityArchRiver Foundation, the Gateway Arch Foundation, and the Great Rivers Greenway, completed the plaza in 2017. 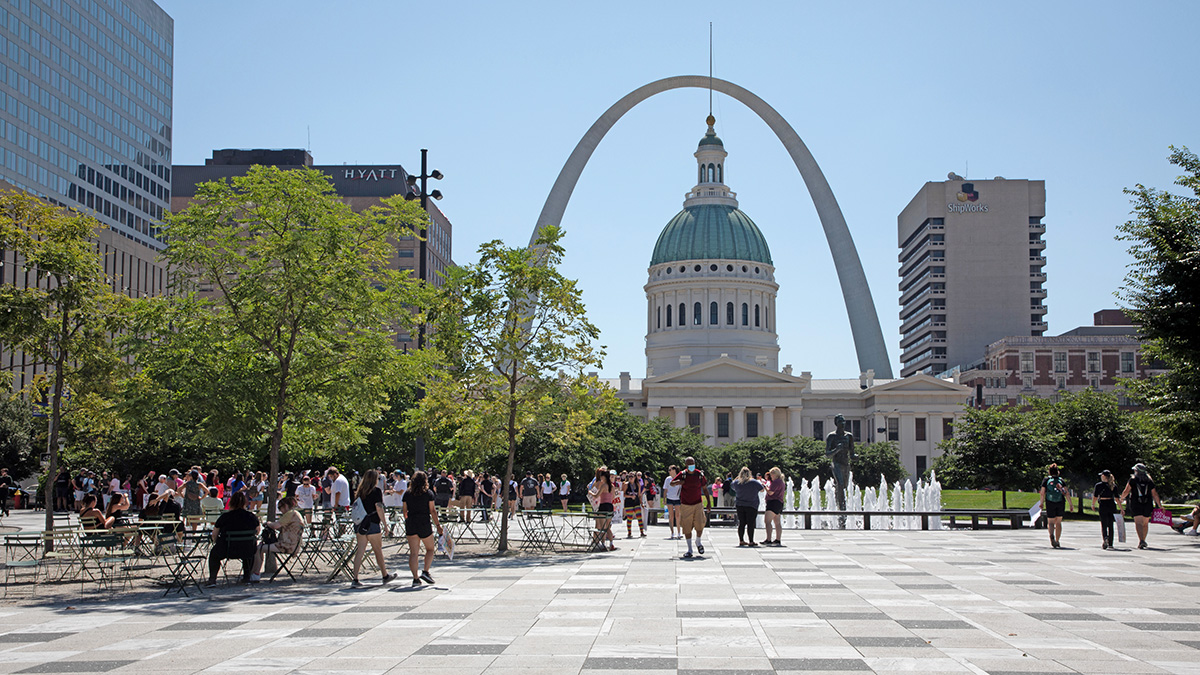 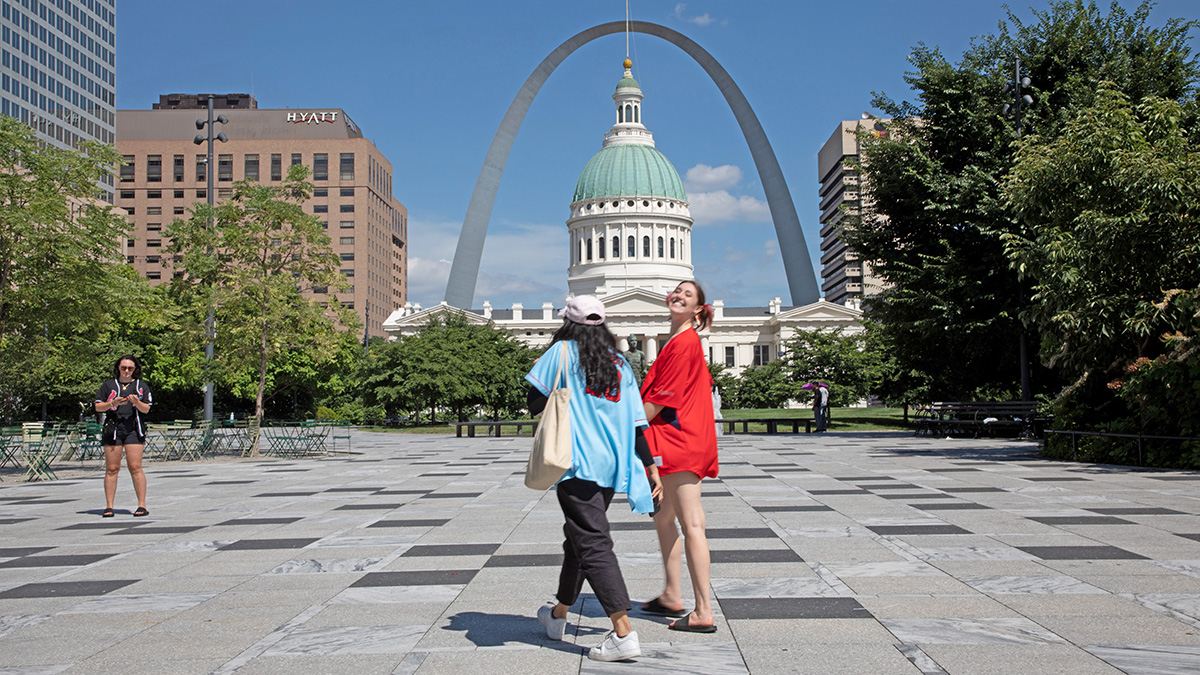 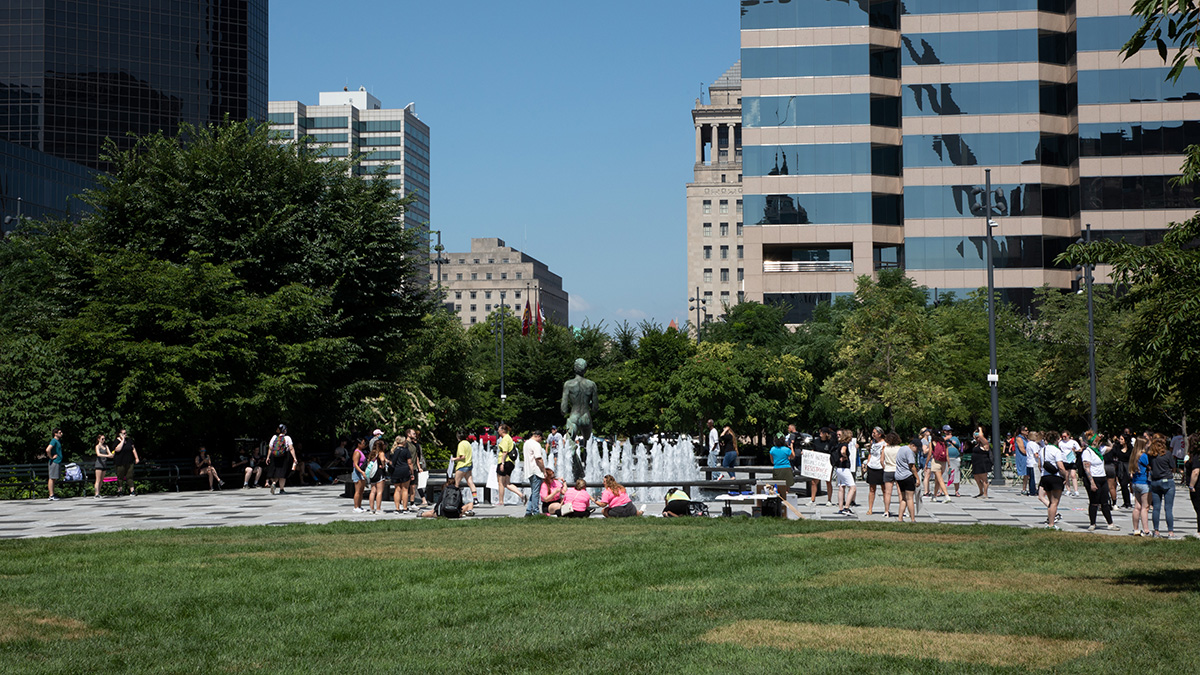 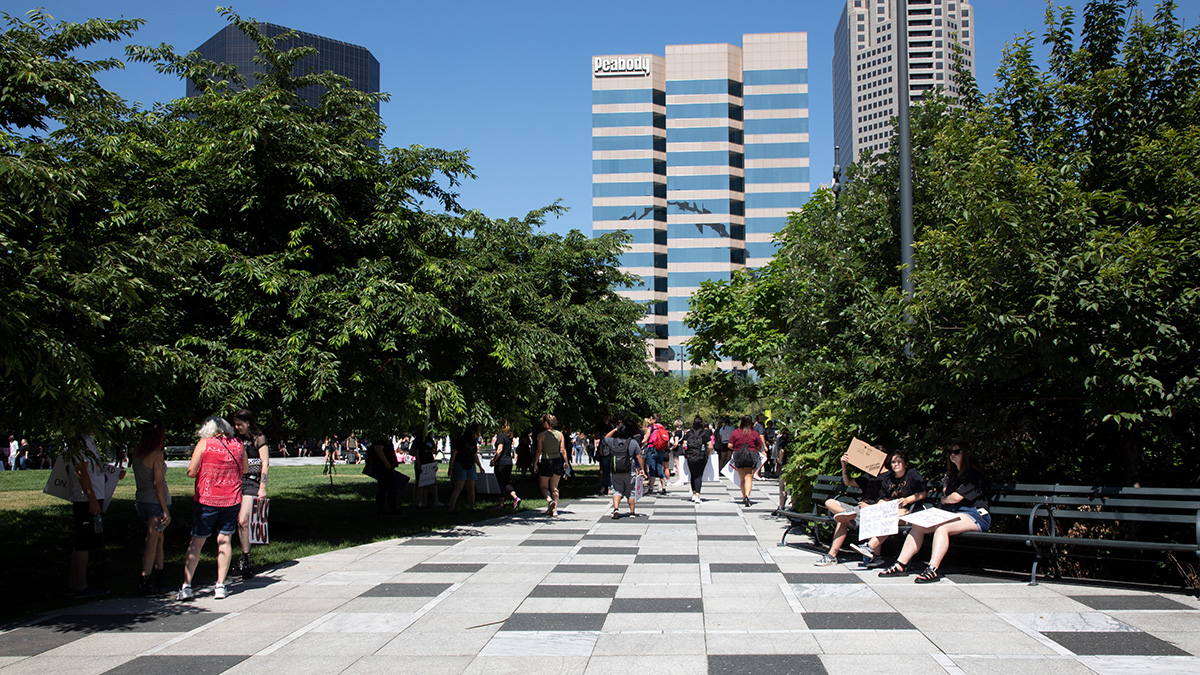 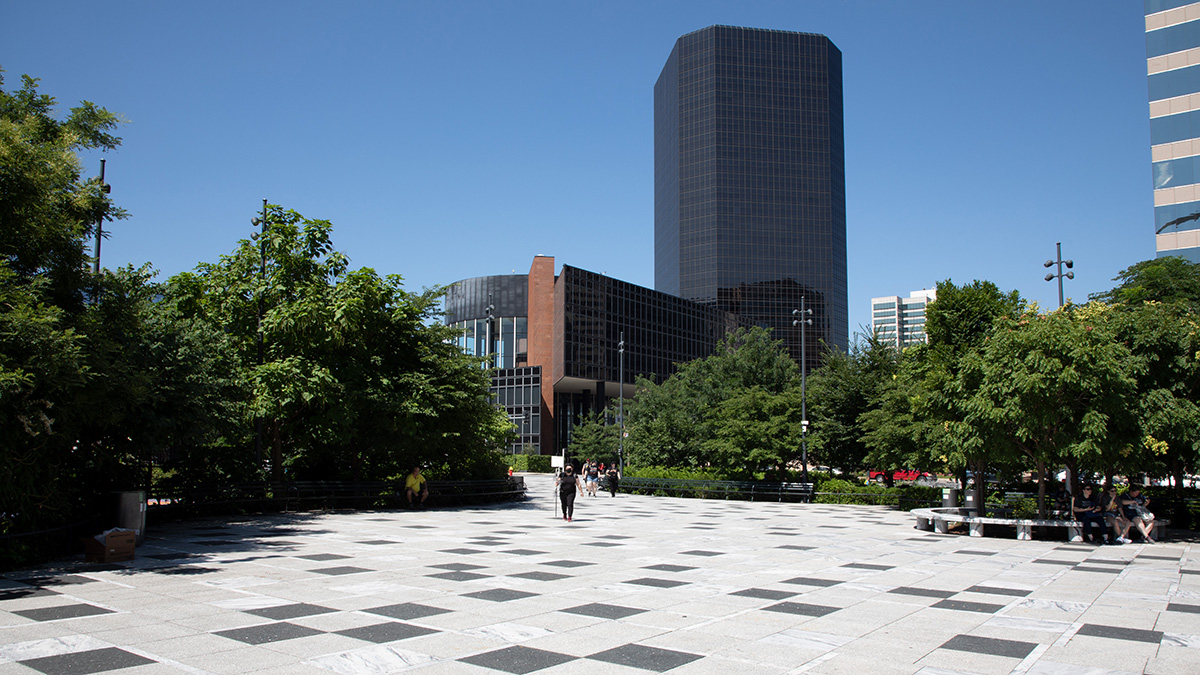 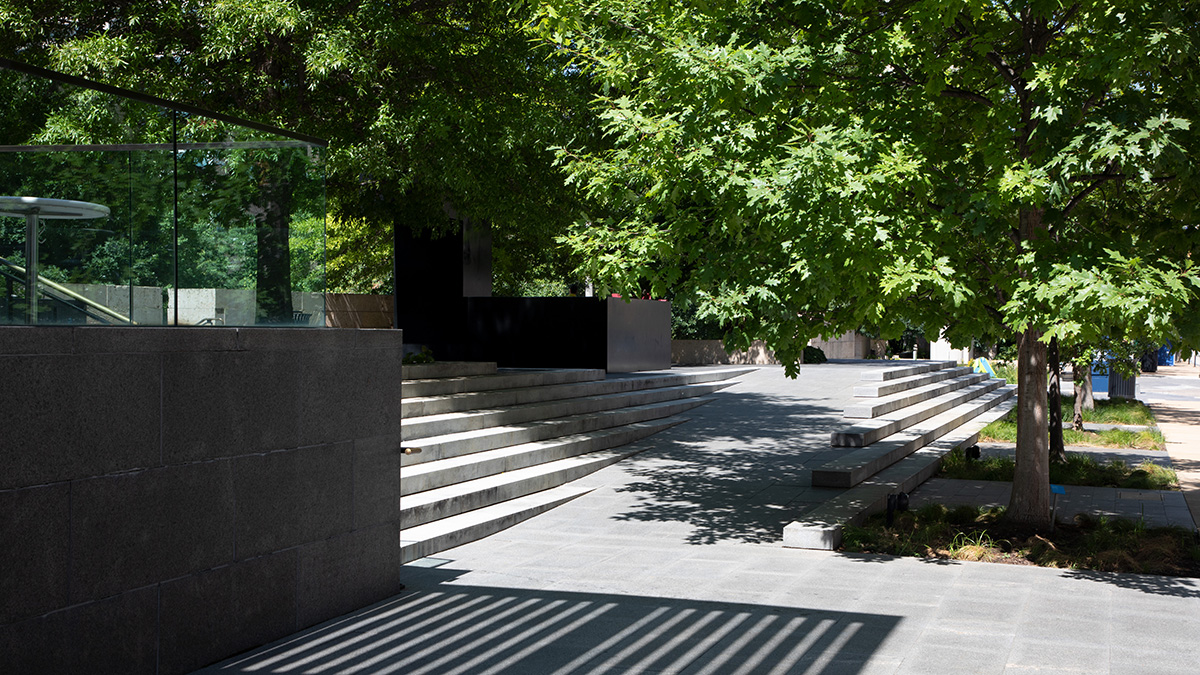 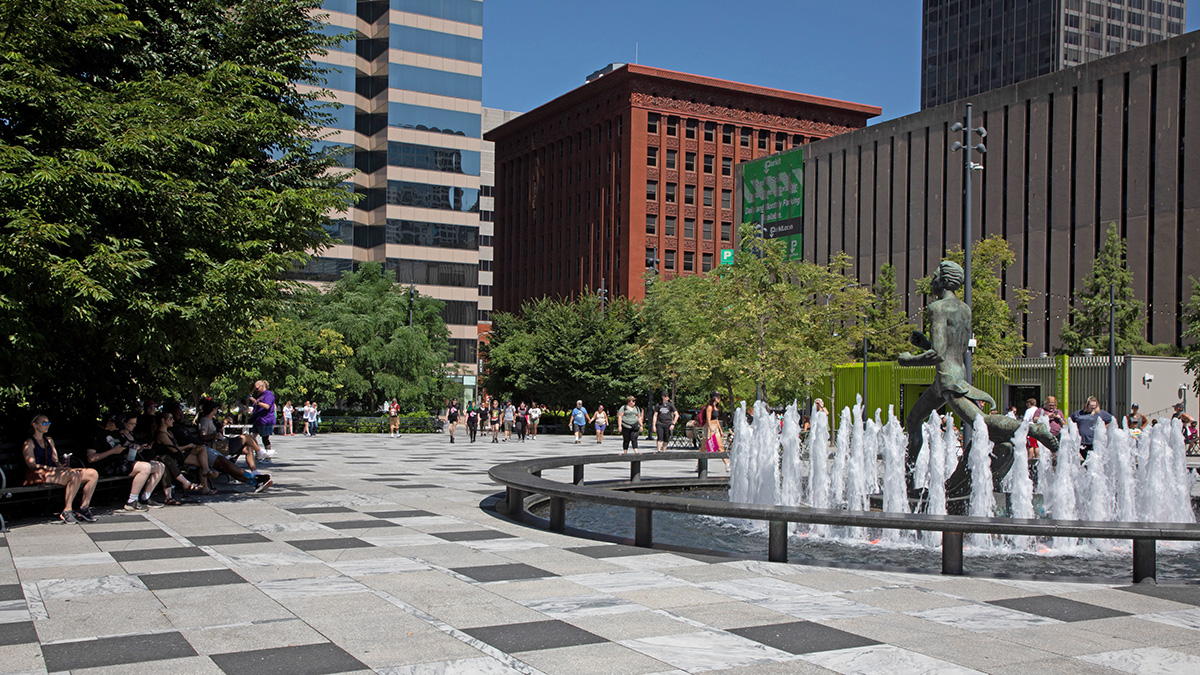 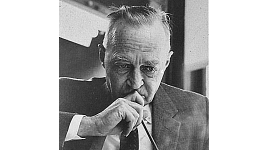 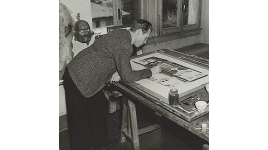 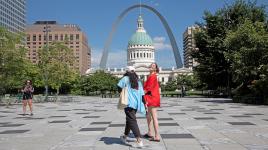