Designed by: I.M. Pei and Partners and Hanna/Olin

Denver, like many American cities, suffered a severe economic decline during the 1970s as businesses and residents moved to the suburbs. As a remedy, Denver embarked on a massive revitalization effort initiated by the construction of the 16th Street Mall. Designed by the firm of I.M. Pei and Partners in collaboration with Hanna/Olin (now called OLIN), the Mall included custom paving and street furniture meant to provide an inviting pedestrian thoroughfare and connect two of the city’s most prominent Modern designs, Zeckendorf Plaza and Skyline Park. Today, of these three modern landmarks, only the Mall remains and current recommendations to rehabilitate the site threaten to irreversibly change this historic landscape.

Throughout its history, Denver’s 16th Street has been a transportation spine of commerce, retail shops, and restaurants that connected the city’s commercial and financial districts, and the City and State Government Centers. Along with smaller shops, large department stores such as Neusteters, May D & F, and The Denver Drygoods, were located along the street. This commercial center was the largest in the region and served not only Denver, but most of the intermountain West.

In the 1970s while businesses and residents moved to the suburbs, the oil bust accelerated Denver’s economic decline. The City of Denver, the Downtown Denver Partnership, the Downtown Denver Business Improvement District, and the Regional Transportation District established a partnership to address the problem and brought forward the idea to create the 16th Street Mall.

In 1980, the City embarked on a national search for a consultant to design the Mall and selected I.M. Pei and Partners (Harry Cobb, Partner in Charge; firm now called Pei, Cobb, Freed) in collaboration with Hanna/Olin. I.M. Pei and Partners had already established itself in Denver with its 1960sdesign for Zeckendorf Plaza, one of the most successful urban developments in the city. A four-piece composition consisting of an ice rink, low-rise department store, high-rise hotel, and retail showroom, covered by a ‘hyperbolic paraboloid’ rooftop, Zeckendorf Plaza was a remarkable example of modernist architecture. 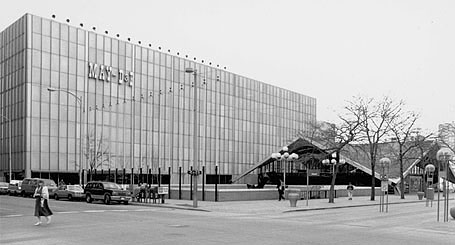 The 16th Street Mall would begin at Zeckendorf Plaza and extend approximately one mile to terminate at Skyline Park, another of Denver’s Modernist designs. Skyline Park was designed by Lawrence Halprin in 1974 and consisted of three linear parks, two of which abutted 16th Street. The park provided a respite from the surrounding commercial and financial districts and was heavily used, making it the obvious terminus for the new Mall.

The Mall opened to great fanfare on October 4, 1982. The 80-foot-wide, mile-long Mall uses distinct paving, lighting, and street furniture to articulate three zones of activity. The first zone is a 22-foot-wide central promenade with trees that provide shade. This zone, which was originally envisioned as a pedestrian zone, has become more of a park-like space, where people sit to rest or read, play checkers or eat lunch. Its use as a passive space is a tribute to the design that creates such an area  between two busy transit lanes. The promenade zone is flanked by 10-foot-wide bus paths, slightly depressed for safety. 19-foot-wide sidewalks bordering the buildings, which have become the primary pedestrian thoroughfare, mark the outermost edges of the mall. 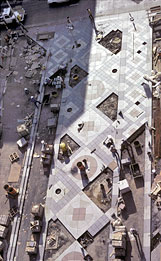 Granite pavers of charcoal gray, light gray, and Colorado red articulate the zones in a complex pattern. The design is intricate in the center and becomes less busy at the edges so as not to detract from the buildings and window displays. The paving pattern creates an elegant ground surface, softening what could be an overwhelming open, hard and linear urban space. Specially designed light standards and street furniture, including colorful planters, trash receptacles, stationary benches and moveable chairs, complete the dynamic space.

The major design elements of the 16th Street Mall remain intact 25 years after its completion. The design has accommodated substantial growth in the downtown area. In 1992, the Mall was extended with an addition from Blake Street to Denver Union Station. Transit and pedestrian usage is heavy throughout the day and evening. Storefronts are occupied and, thanks in part to the thoughtful and elegant design, many of the flanking buildings’ upper floors have been converted from commercial offices to residential lofts.

While the Mall is a public street, under the jurisdiction of the City and County of Denver, it is managed by several different entities. The Regional Transit District oversees the bus operation; the Downtown Denver Partnership addresses the site’s urban design issues; and the Downtown Denver Business Improvements District maintains the Mall. This multi-pronged management structure complicates the decision making process and the development of a clear vision for the future of the Mall

Pedestrian and vehicular traffic have taken their toll on the original materials, particularly the paving material. In 2008, the Regional Transportation District proposed replacing worn pavers with concrete. Within weeks, public outcry against the proposal led officials to halt the project and pursue a more public process for resolution of the problem. In January of 2009, Matrix Design Group and EDAW/AECOM were engaged to produce a technical assessment and rehabilitation strategy for the Mall that would include analysis of the existing conditions and recommended rehabilitation alternatives.

In the report, the team suggested repairing, in place, the pavers in the less traffic-heavy pedestrian areas and removing, resurfacing and reinstalling the pavers in the heavier-trafficked bus lanes. They also recommended an inventory of existing design elements and a comparative analysis to the original construction. While the effort to recognize and respect the original construction is commendable, the report further suggests the replacement of custom light fixtures and removal, replacement, and modification of other custom features including benches, trash receptacles, and signage, along with widening of the sidewalks. Such significant changes would irreversibly damage the Mall’s design integrity.

At its completion in 1982, the 16th Street Mall was one of three exceptional Modernist designs for public space in Denver. Today it is the only one remaining. Zeckendorf Plaza was demolished in the early 1990s, despite much protest from the public. Skyline Park was razed in 2002 after 18 months of public meetings and committee input protesting its demise. If the suggested changes to the Mall take place, it will be effectively lost also. 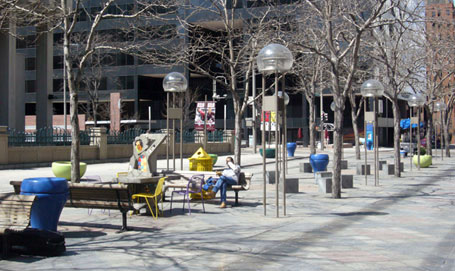 The first action the public can take is to get involved with the decision process. Concerned citizens should encourage their city representatives to support a public process and engage parties from a cross-section of disciplines, including the preservation and design communities.

Long-term efforts to preserve this site should include review for potential local and national historic designation. The landscape’s significance, and that of its designers, makes a strong case for designation, in an effort to preserve the site’s most significant features, while making necessary changes sympathetic and appropriate to the original design.