Designed between 1874 and 1892, Frederick Law Olmsted, the founder of the profession of landscape architecture, dedicated two decades to transform this important symbolic space into a landscape that melds the L'Enfant City Plan of 1791 into a procession of harmonious spaces embracing the Capitol building.

Today, key elements of Olmsted's visionary scheme, America's symbolic "welcome mat," are threatened by proposed plans to build a much needed but ill-conceived underground visitor center. Post-September 11th security concerns have also been incorporated into planning for the new visitor center, and its appears that funding now is being allocated to permit construction.

Between 1874 and 1892, Frederick Law Olmsted, founder of the American Profession of landscape architecture, transformed the grounds surrounding the nation's premier and most symbolic building , the United States Capitol. His landscape embraced this monumental classical structure with a unique design which honored the architecture and connected it to the L'Enfant city plan beyond its borders creating a procession of harmonious and grand public spaces, worthy of the American Federal city. Today, Olmsted's signal design for the main entrance into the Capitol grounds is about to be destroyed by proposed plans to build a much-needed but ill-conceived underground visitor center. With heightened security concerns post September 11th, it appears that this project has secured the massive funding needed to permit construction without much public review of these plans or understanding of the impact of this project.

Frederick Law Olmsted's design for the U.S. Capitol Grounds in Washington, D.C. is a masterpiece. Olmsted worked on the Capitol Grounds for almost two decades, from the early 1870s through the early 1890s, longer than for any of his other commissions. At the Capitol, Olmsted transcended the pastoral and picturesque American aesthetic previously deployed in public parks and suburbs to create something new-a grand landscape befitting a monumental civic setting. The smooth lawns and intricate perimeter plantings were designed with a symmetry that extends the order of L'Enfant's City plan and the Capitol building into its grounds. Carriage drives and walkways adhere to this geometry while accommodating the site's sloping terrain. This topographic and spatial structure was then reinforced with an exuberant ensemble of subtly poly-chromed site walls, benches, pavement, light standards, planters, and fountains. While the understory planting has been altered over the years, the critical visual and spatial relationships and character-defining topography which Olmsted carefully crafted to accentuate the building have remained remarkably intact a full century late, until now. 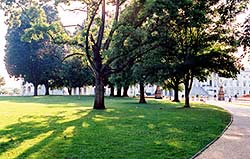 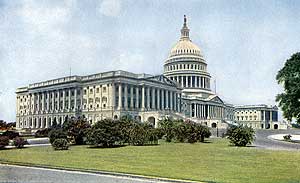 To understand Olmsted's design, consider his own words from 1874: "…. The elements of the plan must be as few, large and simple as they well can be consistently with convenience." He further describes, "two elliptical plots of ground will then be left, unbroken by roads, each 500' in length and 400' in breadth. They will have a gently undulating surface, will be partially shaded by a few groups of large trees between which the eye will range over glades of turf." (Olmsted draft letter, 6/9/1874)

Three years after Olmsted's death in 1903, a House and Garden article documented the innovative design for the Capitol Grounds. Here the author summarizes that "the effect of Olmsted's design was (1) to close harmoniously the gap between the Capitol and the grounds and realize the merits of both, and (2) to add to the apparent height of the building and give it the appearance of a stable foundation." The author goes on to note that, "the planting in general has been skillfully planned so as to preserve and enhance the best views of the building. As a result the visitor can enjoy direct front views of the central portion and dome from opposite sides, and agreeable diagonal views of the entire east and west fronts from four vantage points." (John Nolen, House and Garden, 1906)

While some aspects of the landscape design have been compromised over time or are currently in poor condition, the design intent remains and possesses a high degree of integrity. In fact, in comparison to Olmsted's other public commissions, the Capitol Grounds remain one of the most intact Frederick Law Olmsted designs in the United States. Unfortunately, if the new Capitol Visitor Center is constructed according to the proposed plan, visitors will descend18 feet to a new entrance below an allee of trees without a direct front view to the dome - thus changing a central tenet of Olmsted's design.

The proposed Capitol Visitor Center is mammoth. The area of the proposed new underground structure is approximately 588,000 square feet. To put this in context, the size is roughly equivalent to six three-story office buildings in the Washington Metropolitan area, or about ten football fields of horizontal space. The site modifications planned in order to construct and access such an underground structure will destroy the essential character of the eastern side of the Olmsted masterwork landscape design, itself a national treasure. In addition, the terrorist attacks of September 11th have focused attention on many public locations: funding already is being set aside to begin work on this project, aspects of which will heighten security for visitors and employees alike. One newspaper report stated that construction is expected to begin in January 2002. (Washington Post, 29 November, 2001) 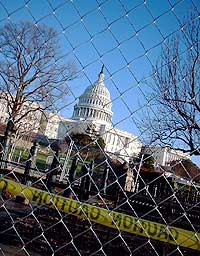 In particular, the proposed two ramps from the East Capitol Street entrance would cut 18 feet into the ground, requiring two large retaining walls which would be further accentuated by a 42-inch safety railing to prevent visitors on the upper level from falling below into the opening of the entrance. The scale and location of these two entrance ramps into the Visitor Center would dramatically alter the historic landscape in fundamental ways: redesigning 1) its topographic structure and 2) its spatial organization, especially the East Capitol Street axis and flanking, tree allees so important to the Olmsted-designed entrance experience.

National groups like the National Association of Olmsted Parks have agreed that the proposed design is not "historic preservation" but a new design. It significantly alters historic visual and spatial relationships, destroys historic topographic features and severs the continuity of historic circulation patterns, which were all paramount to Olmsted's design as articulated in his earliest proposals.

For example, the "hardscape" drawing suggests that "the landscape will be returned to the original Olmsted plan. However, upon review of this drawing it is difficult to discern what is being preserved or restored or to differentiate between authentic historic fabric and new design elements. The ramifications of this new construction, which also alter significant spatial and visual relationships and character-defining topography, threaten this national treasure.

For nationally significant historic designed landscapes such as this, The Secretary's Standards for Historic Preservation and The Guidelines for the Treatment of Cultural Landscapes (National Park Service, 1996) states that it is typical to prepare a Cultural Landscape Report (CLR) and a Treatment Plan prior to undertaking design. Surely, the Capitol Grounds is an important enough landscape to merit the use of this approach as well.

The Architect of the Capitol has already authorized the removal of 14 memorial trees; and as of December 2001 eight memorial trees have been replanted, including the Liberty Tree Seedling.

Considered subordinate to the central structure, many elements of the Olmsted designed landscape had no chance to survive. These trees were planted at a particular location by one of the world's leading experts on landscape design. However, in order to build the new visitor's center as planned, a total of 68 trees will be eradicated.

While there is nothing that anyone can do at this time to save the East Plaza of the U.S. Capitol, Americans can learn from this example: Protect and Preserve the landscapes you treasure