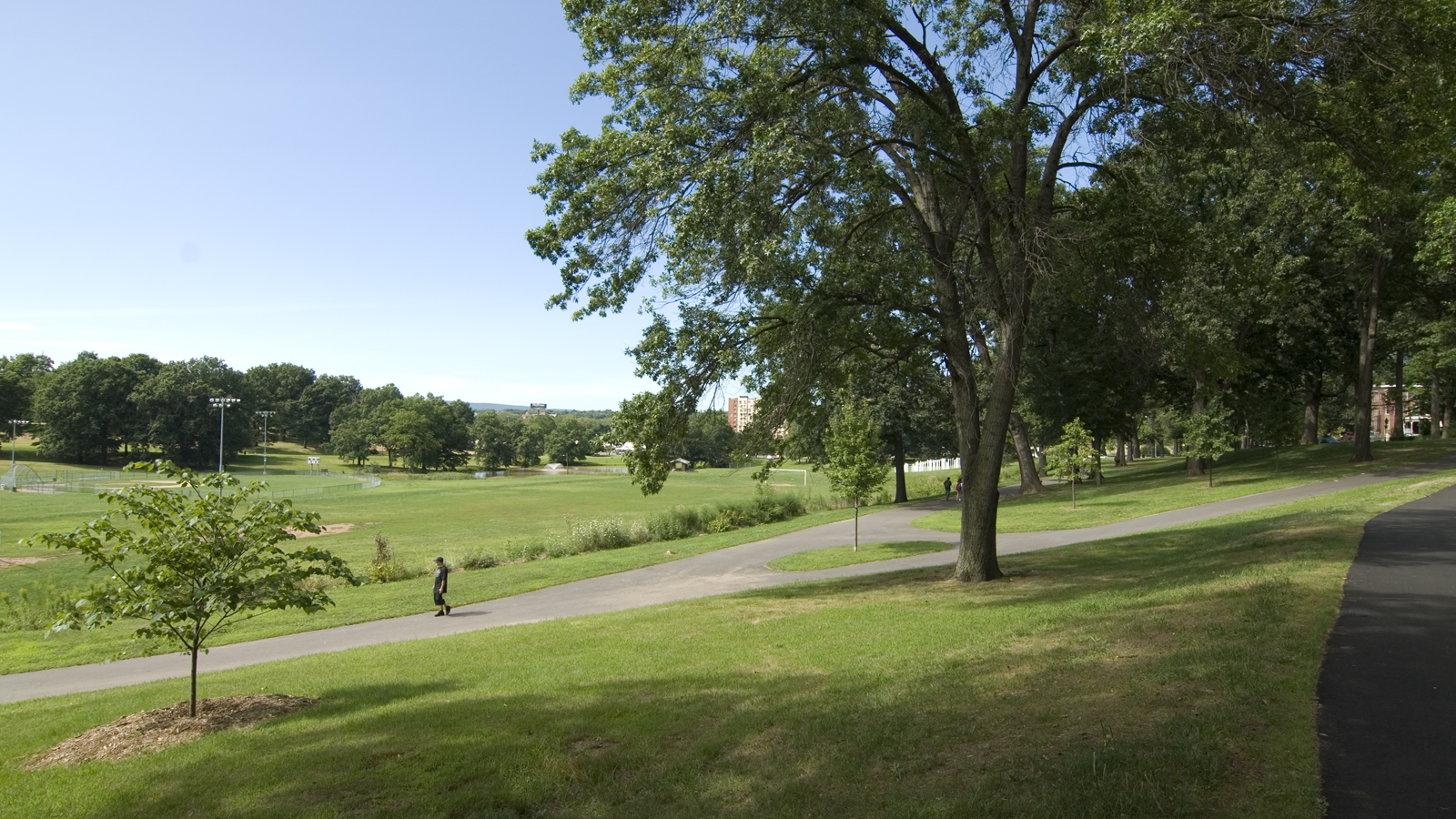 Hartford is not only blessed with the first municipal park (Bushnell Park, 1854) and first municipal rose garden (Elizabeth Park, 1904) in America, it also boasts an unrivaled legacy of parks and boulevards that span several decades of involvement of all three Olmsteds, ranging from small-scale squares and greens (Barnard Park, c1865) to large-scale municipal works such as Keney Park (1896), the 693-acre career capstone of Charles Eliot’s tenure with the Olmsted office.Today, funding and maintenance are critical issues that threaten these historic landscape resources.

By the 1850s, Hartford, Connecticut, was a rapidly-growing small, but wealthy city on the banks of the Connecticut River. Trains had recently replaced a large part of the river transport system as the industrial revolution fueled rapid change. New businesses attracted an increasingly diverse work force from abroad or from outlying villages, towns, and farms.

Though the idea of a city park had emerged more than 20 years earlier among the town’s Court of Common Council, in 1853 Reverend Horace Bushnell, pastor of the North Congregational Church, led a movement to establish the first city park. Bushnell knew of the growing industrialization of the city where workers toiled for long hours and lived in close quarter tenements with no yards or gardens. He envisioned an “outdoor parlor” where citizens could recreate, breath fresh air, and be inspired by the scenery. In addition, City leaders were intent upon creating a permanent location for the State of Connecticut Capitol, and so were mindful that visitors arriving by train would have a sweeping view of the park as their first impression of the capital city. With the creation of Bushnell Park in 1853, the nation’s first municipally-funded public park, the Hartford Parks system emerged as one of the first public park systems in the United States.

Swiss-born landscape architect and botanist Jacob Weidenmann’s 1861 design for Bushnell Park had a distinctive natural style, which featured smoothly sculpted contours and graceful paths leading to focal points like the meandering Park River. The plan included informal clusters of evergreen and deciduous trees, which screened the sights and sounds of the city, a departure from the formal New England square or central green. Weidenmann selected 157 varieties and a total of 1,100 individual trees and shrubs from North America, Europe, and eastern Asia, creating a canopy of green covering the Park. Over the years, many important architectural features, such as the Soldiers & Sailors Memorial Arch (1886), the Capitol (1876), Corning Fountain (1899), the Carousel (1974) and the Performance Pavilion (1995) were added, while other scenic elements, such as the Park River and its several graceful bridges, were demolished in the 1940s. A major transformation in the park occurred at this time when the firm of Olmsted and Olmsted, was retained to assist the city in redesigning the park after the burial of the Park River was completed. 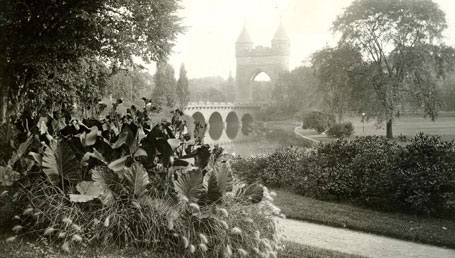 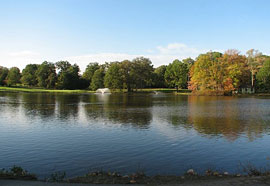 The successor to Horace Bushnell’s efforts was Reverend Francis Goodwin, an amateur architect and member of one of Hartford’s founding families. From workers’ housing to the grand homes of industrialists, Hartford experienced an explosion of Victorian building after the Civil War that turned the capital into the social, economic, cultural, and architectural center of the state. Goodwin’s efforts during this Gilded Age embellished a city already enhanced by the success of many innovative individuals. The crown jewel was the establishment of a system of public parks throughout the city. Goodwin convinced several wealthy citizens to donate land and endow funds for the establishment of public parklands.

Goodwin Park, Hartford’s southernmost park, encompasses 237 acres and is the only park in the system uninterrupted by roadways. The park site, selected by Charles Eliot and John Olmsted of the Olmsted Brothers, benefitted from its placement outside the city’s dense downtown development and served as a complement to Cedar Hill Cemetery, across the street, one of America’s first rural landscape cemeteries from the 1860s designed by Weidenmann. The park, for which the general plan was completed in 1900, included a man0made pond and a 90-acre Great Meadow, surrounded by woods and accessed by curvilinear pathways.

Keney Park, was completed in 1896 and, at 693 acres, is one of the largest municipal open spaces in New England. The pastoral landscape was designed as a series of typical regional landscapes, including meadows and forests, made to appear completely natural. To create this bucolic park, more than a half million yards of earth were moved, and a million trees and shrubs were planted. Ornamental plantings and manicured lawns were purposely excluded and the use of native plantings encouraged the presence of native fauna and a meandering carriage drive more than eight miles in length links the different spaces.

The westernmost terminus of the system, Elizabeth Park (1904), includes the nation’s first municipal rose garden. The park originated as an estate grounds and many of the original features were incorporated by Theodore Wirth, the designer and park superintendent. Wirth installed new drives and walks, moved existing outbuildings buildings, and added ponds, stone bridges, and a nursery. The formal treatment of this park presented a strong contrast to the previously completed parks within the system and has added to its international renown.

Colt Park was established from the former Armsmear Estate of Samuel and Elizabeth Colt which was gifted to the city in 1905. The grounds were developed by the Colts in the highest Victorian style, complete with large reflecting pools, rustic furnishings, fountains, urns, statuary, and exotic fauna. Extensive greenhouses and pastures had created a true gentleman’s working farm.

The last two core parks within the system were meant to provide a needed amenity for the thousands of residents within the city’s working class neighborhoods of Frog Hollow, Parkville, and Front Street. Pope Park was located along the meandering banks of Park River and included a hillside ramble and a formal overlook. The more rural Riverside Park was located along the Connecticut River and was in easy walking distance from downtown Hartford.

By the 1930s, Hartford was reputed to have the largest park acreage per capita in America. Many of the country’s leading park designers of the 19th century and early 20th century in America either advised on or worked on the plans for the Hartford Parks System. Frederick Law Olmsted, born in Hartford, is buried in the family tomb, along with his son and daughter, in the Old North Cemetery, which is part of the Hartford Parks system. In his youth, Olmsted was a neighbor and friend of Pastor Horace Bushnell, who championed the spiritual experience of nature. Jacob Weidenmann, Olmsted’s colleague in the field assimilated the various design-competition plans to produce the final plan for Bushnell Park. Park Superintendent, Theodore Wirth, who designed Elizabeth and Colt Parks, eventually moved to Minnesota to create the Minneapolis Park System. Olmsted’s sons later worked on several of Hartford’s major parks and with their associate, Charles Eliot, designed Hartford’s largest jewel – Keney Park. All of Hartford’s parks created at the time embodied similar philosophies of design that formed the basis for park plans throughout the country. Postcard photographs of the Hartford Parks, especially Bushnell Park, were mailed across the country and around the world – further publicizing the concept of a public park as an urban amenity.

Springing from an inventive transformation of a private estate design typology into a shared place for the public to encounter nature—public parks systems have grown in size, purpose, and in cultural significance across America. Today, Hartford’s parks system exemplifies this historic evolution of public park system values. 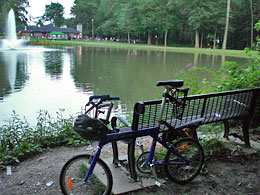 Along with the rest of the nation, this economic downturn threatens the very survival of Hartford’s park system. Disinvestment and deferred maintenance starting in the 1960s has eroded and weakened the historic landscapes. Due to several catastrophic floods in the 1930s, dykes were constructed along the Connecticut River, which forever altered Riverside Park. The Park River, which had defined the edges of Bushnell and Pope Parks was buried—as two intersecting interstate highways were built over the river through the city. Limited City funds for appropriate maintenance and modern recreational facilities over time have wrought many alterations, some inappropriate. Maintenance practices have not adjusted to advances in environmental science and natural best management practices.

Compounding the situation was the elimination of the Hartford Parks Department. Varying responsibilities were split between the Department of Public Works (maintenance) and the Department of Health and Human Services (recreational programs). This split leaves a void of vision, because nature within parkland needs the on-going involvement of design professionals.

Meanwhile, the city, with a looming budget deficit, is being asked to give away 200 acres of historic public parkland (in Keney Park) for purposes of private development, based on claims of economic gain. Because building projects have become such a popular, and politically strategic indicator of community development, other parkland has already been traded for housing—including the Goodwin Estate, which had been given to the State of Connecticut. There is a lack of awareness that the on-going division of parkland, the dwindling park staff, and the loss of eco-service benefits is degrading the essential historic gift of the public park system - access to the vibrancy of nature within walking distance of urban life. 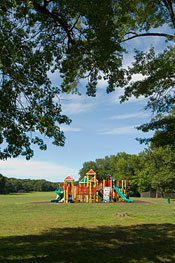 The sheer number and dedication of non-profit park partner organizations such as the “Friends” groups for Bushnell, Pope, Elizabeth, Keney, and Goodwin Parks, and nationally-recognized Riverfront Recapture (Riverside Park) and Knox Parks Foundation show the dedication of the community to these important spaces. Coordinated efforts can have a greater effect if these groups unified into a more cohesive form willing to work together for the good of a holistic park system.

The competition for limited funds, severely detract time and energy from a comprehensive approach to park improvements, and to the restoration of ecological habitats within the parks. Even a modest investment by the City, either through grants, or staff time could energize citizens into more creative action. Reaching out to suburban groups, some already dedicating efforts, could harness additional support and improve regional cooperation. Above all, a clear compelling vision of the public park system—as an integrated, historic and future asset—could spark public interest and involvement in the process of parkland revitalization. The public must insist on re-investment in the public park system. It is important for residents to let their city officials know that, especially during these tough economic times, preserving these public spaces is a priority.

“The Park System of Hartford, Connecticut.” The Trust for Public Land, October, 2007.