Dan Kiley's1960s designs for Concordia Seminary and North Christian Church reveal his philosophical commitment to modern design and his mastery of the art of landscape architecture.

In collaboration with architect Eero Saarinen, these works illustrate the conviction that design and life are inseparable. The National Historic Landmark program has recognized the work of the Kiley-Saarinen team in Columbus; this Landmark designation is the highest national honor a property can achieve in America. The Indiana Department of Transportation plans to widen a road that will destroy part of the North Christian Church landscape. Even worse, a tornado recently devastated the Concordia Theological Seminary campus, including 779 trees that defined its significant spaces and visual relationships. Assistance will be essential to preserving these places.

History
Dan Kiley is among the most important international landscape architects of the 20th century. For over 60 years and in more than a thousand projects, he has transformed the landscapes of private houses, public institutions and vast urban spaces into magnificent places of natural beauty. In September 1997, Kiley was awarded the National Medal of Arts, the highest honor that can be bestowed upon an artist in the United States. Kiley's work includes the U.S. Air Force Academy in Colorado Springs, CO, Rockefeller University in New York City, the Oakland Museum in Oakland, CA and the John F. Kennedy Library in New York City.

North Christian Church, in Columbus, Indiana, is the last building architect Eero Saarinen designed before his death in 1961. It is the last of three buildings in Columbus that he and Dan Kiley worked on together. The other buildings in Columbus were the Irwin Union Bank, and the Miller House. North Christian Church was completed in 1964, and Kiley's extensive landscaped grounds were developed in the years after the building's completion. The landscape has been well maintained and has reached maturity with a great degree of integrity.

Kiley's landscape brilliantly filters and controls views of the building, shaping the experience of approaching and using it. The site is conceived as an enclosure, with areas of significantly different character defined by the plantings and the spaces between them. The building is integrated into the fabric of the site instead of being an object surrounded by plantings.

The entry sequence consists of a long curvilinear drive that runs through open woods of old native hardwoods, to a series of parking lots formed into courtyards by high hedges and perimeter trees. A shaded path leads from the parking areas along the main axis of the church. The path emerges into the sunlight, leading to broad steps up a low earthen berm from which the church swells. A low-pitched slate roof hovers over the berm and the surrounding magnolia grove, then suddenly soars skyward into a 192-foot high steeple.

Maple allees define much of the perimeter of the property. A small meadow bounded by woods, allees, magnolia grove, and hedges affords the single unobstructed view of the building.

A current road-widening project threatens to bring the roadbed closer to the property. As proposed, the project will result in the removal of several magnolia trees and the building's signature concrete and bronze sign. The project will also significantly affect the privacy of the site, lessen the degree of enclosure and increase the noise level.

At the time of design, the property had not been designated a National Historic Landmark, and the Indiana Department of Transportation was unaware of its significance. During the public hearing process, this fact was revealed. The Department of Transportation agreed to study redesign of the project. The project is still in the design and review phases, and construction remains three to four years off. At this point, it is hoped that the redesign will enable Kiley's masterpiece to remain though some work will be done in its vicinity. 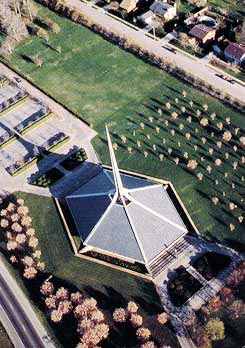 In 1999, the Indiana Chapter of the American Society of Landscape Architects (ASLA) named North Christian Church one of 10 ASLA Centennial Medallion recipients in Indiana. This award recognizes the most significant American designed landscapes of the last 100 years.

Please express your interest in the future of this National Historic Landmark landscape by sending a letter of concern (refering to project number DES 9700230, U.S. 31 Widening, Columbus, Bartholomew County) to the attention of :

Because the project is currently in redesign, timing for additional comments is very favorable. Their likely effect will be to add greater weight to the recognized significance of the site, and strengthen the case for favorable alterations to the original plan. Comments will be duly distributed within INDOT and with its various consultants.