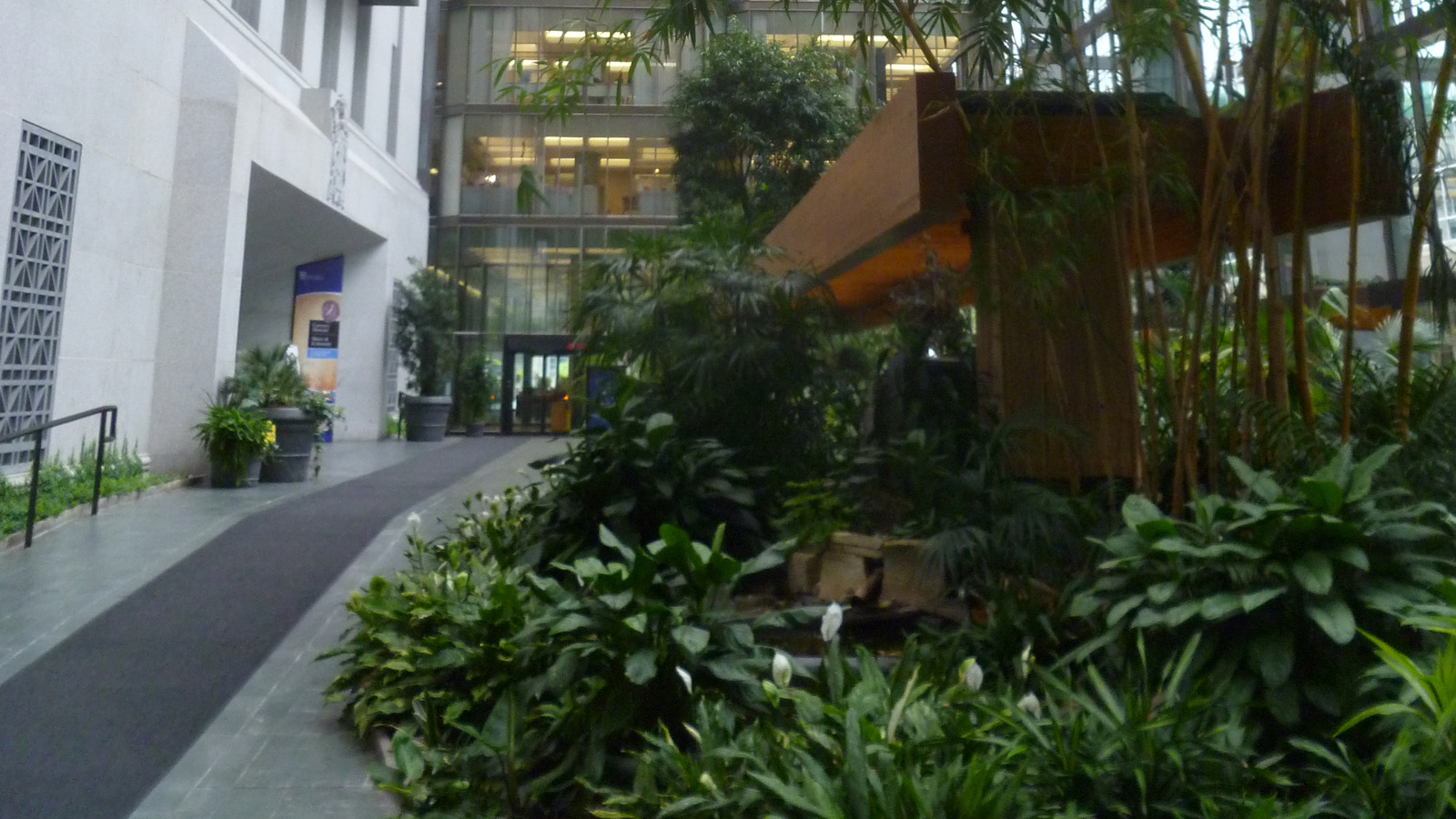 The Bank of Canada’s garden and atrium in Ottawa, situated in a building between Canada’s first retail pedestrian mall and the federal institutional landscape, provide a welcoming public space in Canada’s capital city and exemplify architect Arthur Erickson’s skill as a maker of interior and exterior landscapes. The 12,749 square-foot atrium is now at risk of privatization and the garden threatened with destruction. 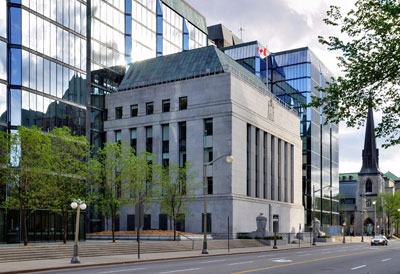 Bank of Canada, photo by Taxiarchos 228 via Wikimedia Commons.Located across from Parliament Hill, the Bank of Canada’s head office occupies a prominent site on Wellington Street, an address it shares with the Supreme Court of Canada, the Library and Archives of Canada, and until 1999, the Embassy of the United States. It is “one of Canada’s best 20th century buildings and a great example of the creative integration of old and new,” says Natalie Bull, executive director of the Heritage Canada Foundation. The centerpiece of the bank is an Art Deco granite building, constructed in the 1930s, flanked by symmetrical glass-and-copper-clad East and West Towers. The three buildings are connected by an atrium. The atrium and towers were designed by Arthur Erickson in collaboration with the firm Marani, Rounthwaite & Dick in the late 1960s and completed in 1979. A lush tropical garden, incorporating a reflecting pool, runs almost the length of the atrium. The green slate floor gently dips down toward the water which sits beneath a trellis of long wood beams. The result is a human-scaled and intimate experience within a 262-foot-high space. 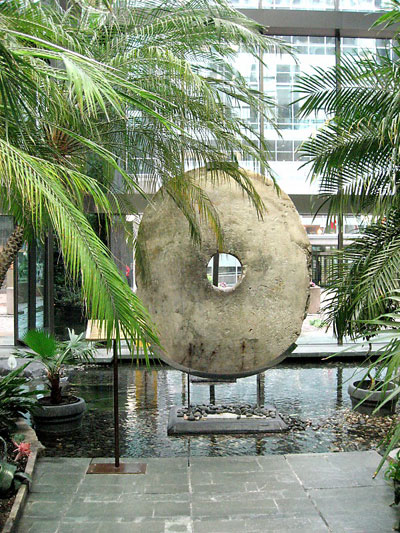 Yap Stone at the Bank of Canada Atrium, photo by Beades via
Wikimedia Commons.Philip Johnson, the influential American architect, described Erickson as “by far the greatest architect in Canada, and maybe the greatest on this continent.” Landscape was a key feature of his work, which includes the Canadian Chancery in Washington DC, and the Museum of Anthropology at the University of British Columbia in Vancouver.

Erickson designed the atrium with a “lake” and three mounds of plantings. He sent architect Keith Loffler, who collaborated with the landscape architecture firm Hough Stansbury and Associates, to Florida to select plants, directing them to include a large ficus tree, palms and podocarpus.

The Bank had a Yap stone, the largest known currency, and requested it be conspicuously displayed, recalls Loffler: “Instead Arthur placed it in the water between two of the mounds, so it was partially hidden and the public had to find it. In this way, appreciation of its rarity was enhanced.”

The winter garden was meant to help compensate for the loss of a park on the site. Louis Rasminsky, the Bank’s governor felt the Bank had a duty to give access to the atrium to “the people that made it all possible,” said a 1971 newspaper article. The garden court which is now closed to the public was designed to be discovered by tourists, office workers and shoppers. They could walk through, sit and eat lunch, and enjoy the garden. It served as the entrance to the Canadian Currency Museum and was popular for wedding photos.

In 2011, the Royal Architectural Institute of Canada and the Heritage Canada Foundation chose the Bank of Canada for the Prix du XXe siècle, which recognizes enduring excellence. The Bank declined to accept the award because it was in the midst of obtaining approval for a US$572-million renovation. 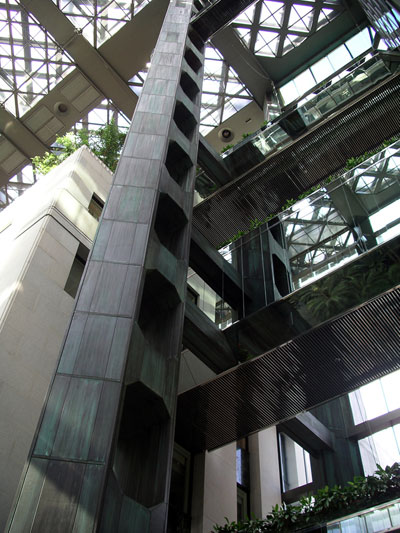 View of the Atrium Roof and upperstory plantings, copyright
Steven Zhen Wang.As part of the renewal, which will begin this month, the Bank plans to close the atrium to the public, citing increased security. The plants and pool will be removed. The green slate floor will be replaced with another material and its slope evened out. The atrium will be used as informal meeting space for bank employees. “… we are still bringing some of the garden, but it may be more of a Canadian-type of garden,” says Dale Fleck, the Bank’s project manager. “We’re not going to have a water feature. It limits the use of the space. We want to use as much of the space as we can for the Bank and staff.”

Among those who object is Phyllis Lambert, founding director of the Canadian Centre for Architecture in Montreal and chair of the Arthur Erickson Foundation whose mandate it is to promote understanding of one of Canada’s most important architects. “To remove the garden would be to remove the soul of the building,” she says. “It is not only a major piece of Erickson’s design, it is a major aspect of the building. It has a great and important function. It is how he connected the new building to the old and is a very brilliant way of doing so. It also connects to the other public space around it.” Security can be achieved in other ways, she adds, “As in all great buildings, the ground floor is public. It cannot be privatized.”

In a 1972 address to the Institute of Canadian Bankers, Erickson, who died in 2009, warned against the short-term view. “You as bankers, cannot afford to be concerned with only the economic aspects of projects that you finance. There may be serious implications on the natural environment, on the urban environment, on human culture, which at some future time may be considered crimes against mankind.”