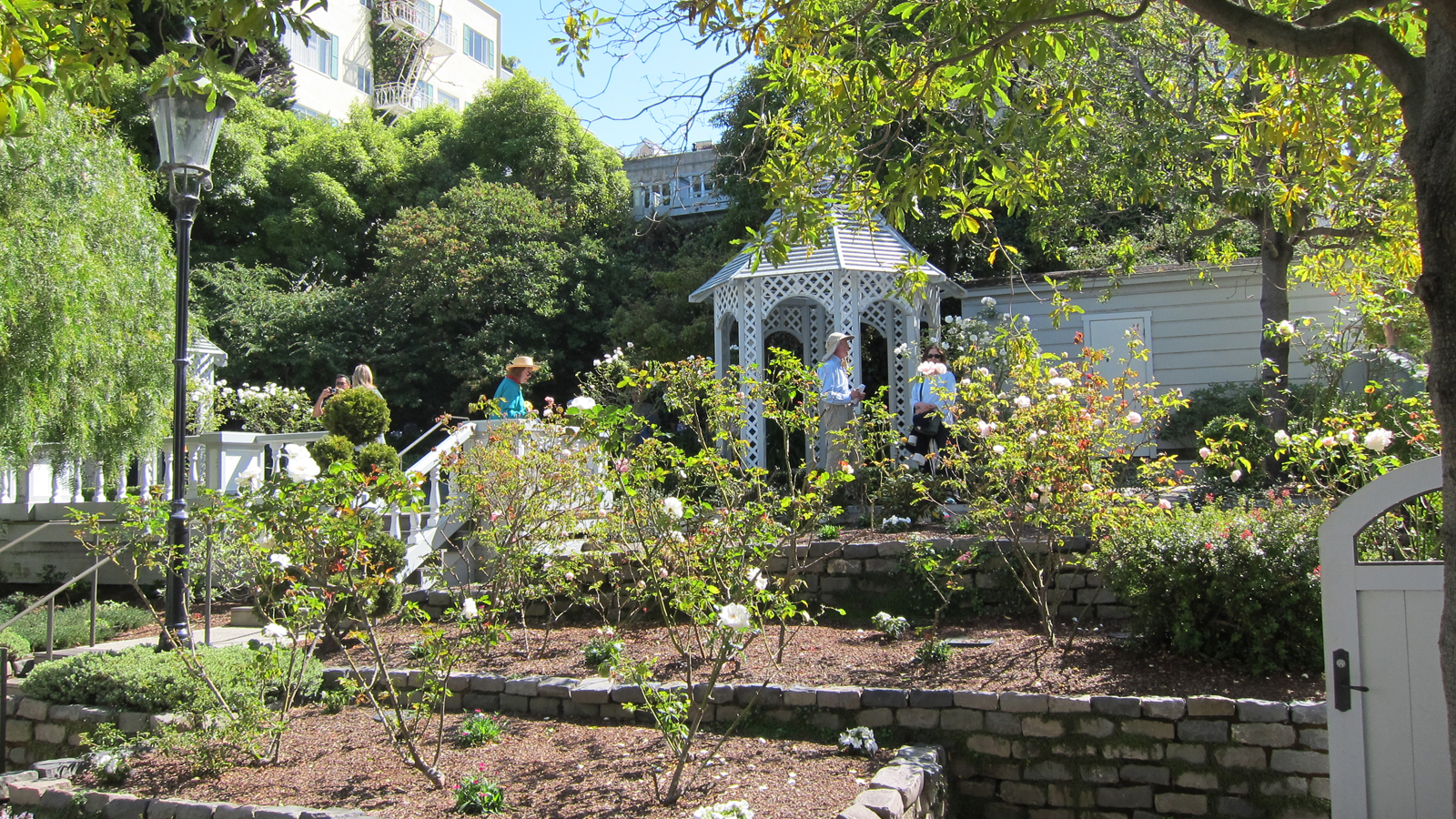 Fay Park sits on the northeast side of San Francisco’s Russian Hill, just a block from the base of winding Lombard Street. The park is the only publicly accessible formerly private residential garden in California designed by one of San Francisco’s pre-eminent landscape architects of the twentieth century, Thomas Church (1902-1978).

The property, which includes the original house and garden, occupies a prominent corner location and is integral to maintaining the character and scale of the neighborhood as larger scale developments have encroached upon the community. The house is also essential to the garden as an extension of Church’s trademark “outdoor living” concept. Unfortunately, the condition of the house has deteriorated dramatically in recent years, putting it, the garden and the community under threat. 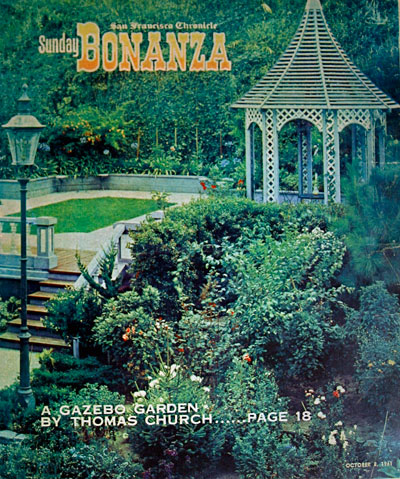 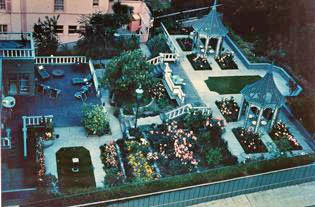 (upper) Fay Park was featured in the San Francisco Chronicle's
"Sunday Bonanza" magazine; (lower) Fay Park from above,
images courtesy Pam-Anela Messenger.The original Fay home, built in 1869 by soap baron David Fay, survived the 1906 earthquake and fire only to be demolished by Fay’s nephews Luke and John, Jr., who built a new house in 1912. Mary Eugenie Fay, Luke’s daughter, moved into the house with her husband Brigadier General Paul Berrigan in 1953 soon after inheriting it.

In 1957 the couple hired Thomas Church to design their garden. In his 1969 book, Your Private World and an article he wrote for the San Francisco Chronicle a decade earlier, Church, described the existing space as a large unwieldy garden with a specimen pepper tree (Schinus molle) at its center and exposure on three sides. Remarking on the steeply sloped hillside occupying a large portion of the property he said that the existing cobble-edged paths “plodded up the slope” but didn’t lead to anything.

Church converted the large lot into an accessible and attractive garden. His symmetrical scheme included flowers and fruit trees in terraces that stepped up the hillside along with parterres and landings. He also established two lawn areas and several hard-surface areas for relaxation and entertaining, and he retained the pepper tree in its original location, slightly off-center, in the middle of the garden.

The relationship of indoor-outdoor spaces, a signature design element in Church’s work, was addressed through redesigned decking off the kitchen and sunroom on the home’s main living level. The deck’s basket weave pattern is the same design used at the 1948 Dewey Donnell Garden in Sonoma. As the sunroom itself opens directly onto the main terrace of the garden, the deck became an extension of the interior living area. To integrate the Edwardian house with the more “modern” garden, he designed a classic balustrade, which is repeated at different levels, as the guard rail of the deck and the upstairs porch. Off the west end of the deck, exposed aggregate concrete walks with wood joints, a favorite paving choice of Church’s, define the flower and herb beds for the main level of the garden. The pattern is repeated in the upper level surrounds for the gazebos and lawn. 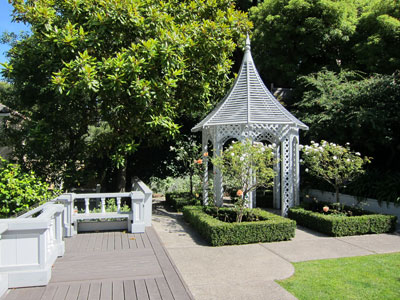 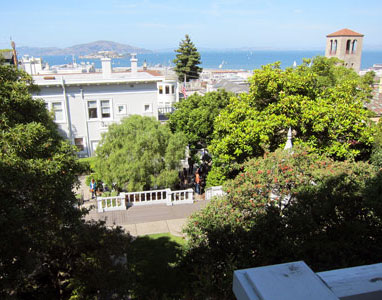 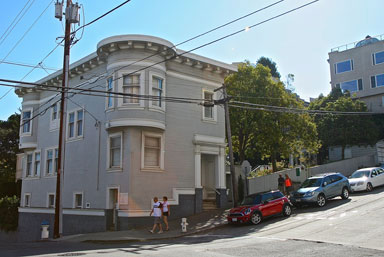 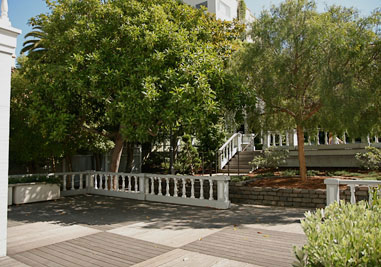 (upper) Fay Park, 2011. Photo by Charles Birnbaum, courtesy The
Cultural Landscape Foundation; (second) Fay Park from above,
2011. Photo by Charles Birnbaum, courtesy The Cultural
Landscape Foundation; (third and lower) Fay Park and House,
photos courtesy Pam-Anela Messenger.The most striking feature of the garden is its twin latticed gazebos—a nod to the castle towers on the logo of the Army Corps of Engineers, the General’s alma mater. An early advocate of garden lighting to extend the livability of gardens, Church fitted the gazebos with starburst pendant fixtures with multi-colored glass panels. Church also installed two copper Copenhagen light standards at the base of the stairs on each side of the pepper tree to illuminate the garden’s main level. Church purchased these on a trip to Denmark and used them in selected gardens, including his own, over the latter half of his career.

After Fay’s death in 1988 her husband continued to live in the home. Upon General Berrigan’s own passing ten years later the property was bequeathed to the City with the stipulation that it be used as a park.

The San Francisco Recreation and Parks Department (SFRPD) has done routine maintenance on the garden since it was restored in 2006. However, the SFRPD garden staff has not completed critical gardening tasks and repairs that have been needed for many years. Consequently the garden suffers from faulty irrigation and drainage failures, insect infestation, improper or negligent pruning practices, and diminished lawn areas. The specimen pepper tree has been replaced twice, the latter replacement succumbed to over-watering and insect infestation in 2013. The dead tree was removed but has yet to be replaced. Even the changing of bulbs in light fixtures is deferred for months at a time. To remedy this shortfall, volunteers organized by the Fay Park Citizens Action Committee (CAC) have worked periodically to maintain the garden at a higher standard.

The house, however, has not been maintained and is in dire need of rescue. Outdated plumbing and electricity, peeling paint and water damage leading to rotting wood and mold, are just a few of the problems. The CAC has endeavored to bring the deteriorating condition of the house to the attention of the City but there has been no response leading to any maintenance or repairs.

The City (and the CAC) would like to have an occupant for the house but the City and SFRPD have made little effort to try to find a suitable tenant. Of course, occupation would require that the building be in compliance with code requirements and the house could not be significantly altered. However, an occupant could be allowed to forego rent in exchange for repairs.

Members of the CAC have made continued efforts to discuss the state of the home with the SFRPD, Mayor Edwin Lee and the Recreation and Park Commission. Unfortunately these efforts have been fruitless. If the house continues to decline, it will likely have to be demolished. Without the house, the garden itself has no raison d’ȇtre. 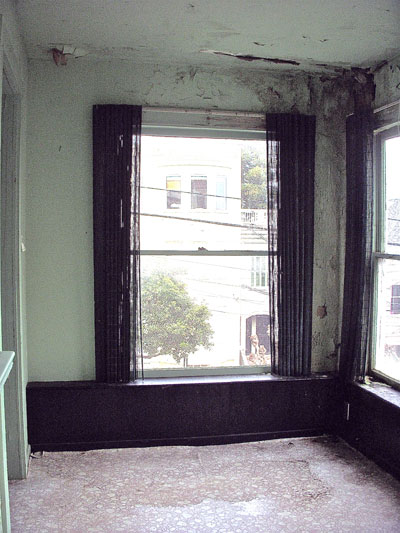 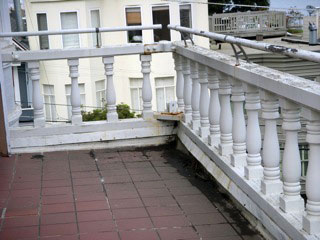 Fay House deterioration, photos courtesy Lucretia Rauh.Please express your concerns and support for Fay House and Park by contacting any or all of the following: 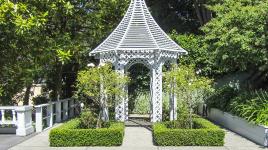