On June 30, 2011, the National Register-listed Garfield Park Conservatory in Chicago was heavily damaged in a passing hailstorm, causing officials to close the facility until further notice. While select rooms have been reopened, the conservatory’s centerpiece, the Fern Room, was heavily damaged and only a portion of the outside gardens are now accessible. 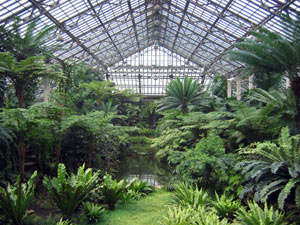 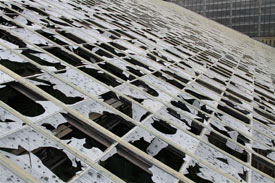 (upper) The Fern Room before June's hail storm, photo by
Charles Birnbaum; (lower) Fern Room roof after hail damageThe 4.5-acre Garfield Park Conservatory in Chicago, Illinois, is one of the largest conservatories in the nation. Located within Garfield Park, it was designed and built by landscape architect Jens Jensen in collaboration with the engineering firm Hitchings & Company between 1906 and 1907, as the main display and propagation site of plants grown for the city’s West Park System. Smaller conservatories built during the 19th century in the other West Parks—Humboldt, Douglas, and Garfield—were centralized in this one larger structure. The conservatory’s form emulated a Midwestern haystack in the prairie and is a rare interior design by Jensen.

The final design represented a significant collaboration of nationally known architects, engineers, landscape architects, sculptors, and artisans. The main glass-covered building houses several rooms of seasonal garden displays as well as a permanent collection including the Desert House, Aroid House, and Palm House. Along with extensive display houses, like the Prairie style Fern Room, cold frames were also constructed to support the propagation of thousands of plants that were transferred to the city’s parks each year. The conservatory was considered revolutionary when it opened in 1908 as the design included an indoor lagoon in the main room and utilized in-ground plantings rather than container displays throughout.

Garfield Park and the Conservatory were listed in the National Register of Historic Places in 1993. However, a devastating cold spell in the winter of 1994 caused extensive damage to the collection. Following the storm, the Chicago Park District convened a task force to plan for the future of the site. As a result, the Garfield Park Conservatory Alliance was established as a nonprofit steward. Funds from the Park District and private donors supported the implementation of an extensive, multi-year plan to restore the conservatory. The Alliance installed new heating and ventilation systems and expanded visitor offerings and programming. More recently, urban and children’s garden displays have been constructed to meet growing visitor demands. 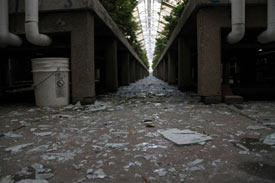 Production Greenhouse hail damageSeveral of the historic conservatory’s display houses sustained extensive damage during a recent summer hail storm. More than half of the glass panes in the roofs of the Fern Room, Show House, and nine propagation greenhouses were shattered and the Desert House also sustained significant storm damage. The falling glass not only cut leaves and stems of the specimen plants, but until the roof is repaired, direct sun and exposure to the elements threatens to destroy thousands of plants that have been established over the past decades, some of which are 200 years old.

Moreover, the extensive cleanup effort means public access is now limited. Dangling glass continues to present a danger to workers, and glass that has fallen must be removed by hand from the displays so as to limit contact with the delicate plants. While select rooms have been reopened, only a portion of the outside gardens are now accessible. The Summer Tropical Flower Show, a mainstay at the conservatory, has been cancelled, and the Jazz Under the Stars summer concerts have also been put on hiatus until next season.

For the past two decades, the Garfield Park Conservatory Alliance has partnered with the Chicago Park District to provide enhanced programming at the conservatory. Now more than ever the public is encouraged to show their support by visiting the conservatory. With a lack of sufficient funds the restoration work could take years, during which time the structure could further deteriorate causing the loss of much of the valuable and historic plantlife, some of which is more than 200 years old. To make a contribution to the efforts, visit the Garfield Park Conservatory website.