As part of a multi-phased plan, the Winchester Public School District in Virginia has undertaken renovations of its historic John Handley High School campus.

The work to rehabilitate the historic building is nearly complete, however plans to install an eight-lane athletic track and new artificial athletic field have recently led to the removal of several of the campus lawn’s mature trees and call for re-shaping the site’s topography. Supporters of the historic designed landscape would like the Winchester Public School District to complete a cultural landscape report before work proceeds.

John Handley (1835-1895) was born in Ireland and immigrated to America around 1850. After studying law at Columbia University, Handley established his practice in Scranton, Pennsylvania, and eventually served as a judge in Luzerne County and as President Judge of Lackawanna County. Although he never lived in Winchester, Handley visited many times, pushing for construction of a park and even financing the construction of a modern hotel for the town.

Upon his death in 1895, Handley bequeathed $250,000 to the town. The Handley Board of Trustees soon increased this inheritance and the funds were used to construct Handley Library, Frederick Douglas School, and Handley High School, all three of which are now listed on the National Register of Historic places. Prior to establishing Winchester’s school system, Chairman of the Handley Board of Trustees, R. Gray Williams, visited schools in Gary, Indiana, where William Wirt, an educational advisor to New York City’s school board, was guiding education reforms. Williams was so impressed that he stated in his 1916 annual report: “Public play-grounds are now conceded by all educators to be part of the essential equipment of the public school system of any community.” With this progressive philosophy as a guide and in deference to Handley’s original proposal to give Winchester a park, the Board hired John Charles Olmsted (1859-1920), the country’s leading landscape architect, in 1916 to plan the 72 acre Handley school and playground site. Soon after, Walter Roy McCornack (1877-1961), official architect for the Cleveland School Board from 1914-1925 and best known for his schools and public housing projects, was hired to design Handley High School on the eastern 40 acres of the 72-acre plot of land.

The resulting historic designed  landscape is reminiscent of Frederick Law Olmsted, Sr.’s, formal Beaux Arts design for the Columbian Exposition of 1893 (Chicago World’s Fair) and includes a formal design for all areas adjacent to buildings with a natural, park-like area on the perimeter. The football stadium and track are located in front of the school in an area known as the Handley Bowl. Between the Bowl and Valley Avenue to the east is a double allée of trees flanking a grassy mall (similar in character to the mall in Washington, D.C.) terminating in a large open lawn used as a football practice field. On the north and south side of the formal mall are informal natural areas of trees on small rolling hills and valleys. 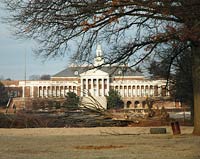 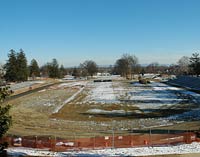 Significance of the Landscape

John Handley High School, including its grounds, was nominated by the Handley Board of Trustees and listed on August 14, 1998 at the state-wide level of significance in the National Register of Historic Places as the first and only privately-endowed, public high school in Virginia and one of only four schools in the state associated with John C. Olmsted. Handley High School was designated with recognized significance in architecture, education, and landscape architecture.

Along with being associated with a master craftsman, the school’s grounds host several significant horticultural features. Maple trees on the north side of campus along Handley Boulevard were planted as memorials to those Winchester soldiers that died in World War I. Japanese cherry trees from the Jefferson Memorial in Washington, D.C. were obtained and planted by Dr. Garland R. Quarles (principal of Handley from 1928-1949 and 1951-1965, Superintendent of Winchester Schools from 1930-1965). In addition, many trees were planted by various classes and as memorials to teachers and students.

The final phase of renovations for the grounds calls for the installation of new athletic fields and an expanded eight-lane track, as well as reworking the network of existing paths. In order to complete this work, the contractors have started removing trees, including some of considerable size and age. An immediate need exists to map the historic trees so they can be protected with construction fences in order to safeguard against heavy earthmoving equipment accidentally damaging the trunks or compacting soil and tree roots. While the original planning documents mention the Olmsted design, it gives very little information about the historic designed landscape and does not mention removal of any trees.

In addition to the removal of trees, a significant amount of earth has been moved, reshaping of the contours of the site.  The installation of nonporous Astroturf on the football field at Handley Bowl and the enlargement of the track from six to eight lanes further threatens the existing cultural landscape. Because Astroturf does not absorb water, a massive drainage system has been designed with 3 two foot -diameter drains, requiring considerable excavation to install and taking the water to a huge planned drainage field below the mall. The approximately 100 by 300 foot French drain will remove rainwater from the site which currently infiltrates into the soil, supporting the plantings above. Though the drainage field will be buried 8 to 15 feet, this significant change to the environment is likely to adversely affect the two rows of mature trees flanking the mall through soil compaction and changes in the water table.

Though neither Olmsted nor McCormack’s plans were fully realized, further research to illuminate the extent of each designer’s contributions would help in mapping the site’s multiple layers of significant history. Without a cultural landscape report, there is no guide to the existing conditions, the site’s significance or its integrity. Research and documentation should be the first step in any preservation project because an informed decision cannot be made without adequate information. While the Garden Club of Virginia has limited involvement in the project, they have not been charged with overseeing the larger process. Moreover, the City of Winchester’s Planning Director has approved plans at an administrative level, suggesting that there has been no historic review of the changes being made to this significant National Register listed property.

Letters of support for undertaking a cultural landscape report to guide the campus rehabilitation can be sent to the Handley Board of Trustees and the Winchester Public School District.

For more information about how to help, please contact: