The design for the Late Modern Long Beach Civic Center, completed in 1977, was innovative for its time. The Center sits on six-square blocks in downtown Long Beach and was intended to serve as a center for civic engagement, and consolidate the city’s departmental headquarters into a single site. Current plans to redevelop the Civic Center are forcing a reexamination of the existing buildings and discussion about preservation of the recent past. 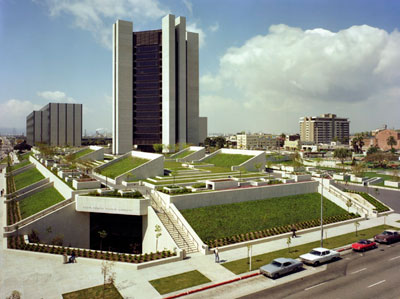 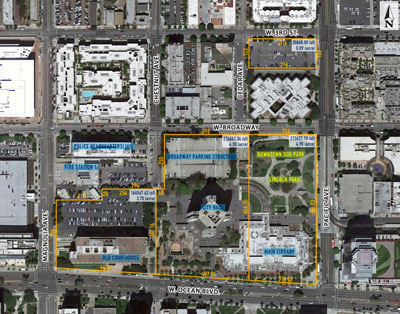 In 1973, the City of Long Beach commissioned Allied Architects, a consortium of local architecture firms to propose plans that would help update the city’s aging municipal facilities. The consortium was headed by Hugh and Donald Gibbs and included Kenneth Wing, Sr. and Jr., Killingsworth, Brady & Associates, and Homolka & Associates.

The team’s plans called for the construction of a new civic center housing: Lincoln Park, designed by landscape architect Peter Walker and his firm Sasaki, Walker and Associates; the Main Library; the Long Beach County Courthouse; and Long Beach Public Safety Building and Police Station. Long Beach City Hall, a glass and aluminum high-rise tower located at the center of the complex is supported at each of its four corners with dual concrete piers, a form that recalls the Knights of Columbus Building in New Haven, Connecticut, which was built in 1969 by Kevin Roche and John Dinkeloo. In a symbolic representation of the city government’s transparency, the city council chambers on the upper floors of the building feature a glass viewing area, providing visibility to the public from the plaza below.

The main library is also central to the Civic Center’s design. Sitting partially below ground in the southern portion of Lincoln Park, the low-rise building incorporates rooftop gardens inspired by those designed by Roche and Dinkeloo with landscape architect Dan Kiley at the Oakland Museum of California. Peter Walker of Sasaki, Walker and Associates collaborated with Allied Architects to design the rooftop gardens, structuring the space with planters and grass berms supported by reinforced concrete walls. The library’s large clerestory windows, light wells and cascading planters visually merge the building’s interior and exterior spaces.

On the west end of the site a pair of International-style buildings, designed in 1960 by Francis Heusel and Kenneth Wing, Sr. complement the 1977 design. Not all components of the 1970s design were realized, the original plans called for the integration of shops, creation of stadium seating for concerts on the plaza, and an I.M. Pei-designed building which would have been the home of the Long Beach Museum of Art. 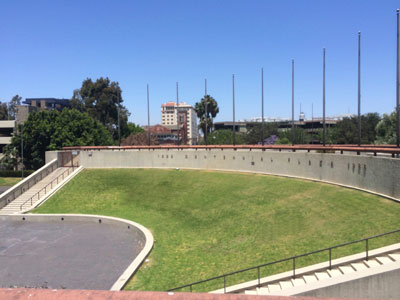 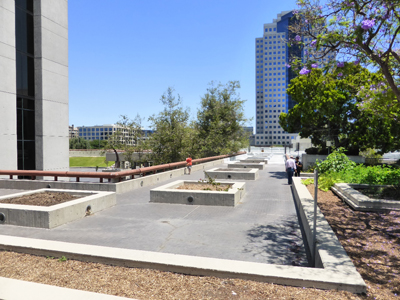 The entire Civic Center complex, including the buildings and landscape are threatened with demolition, except for the recently rehabilitated Long Beach Public Safety Building and Police Station. A Notice of Preparation that the city is about  to embark on an Environmental Impact Report has been issued for the Long Beach County Courthouse without a replacement project in place. Citing seismic deficiencies, space requirements, and functional obsolescence, the City is seeking a public-private partnership that would pair them with a developer who would design, finance, operate and maintain a new Civic Center. A Request for Proposals was issued in February 2014, prior to conducting an Environmental Impact Report which would determine the project’s impact on Long Beach’s sensitive coastal location.

The buildings do not meet today’s building codes, but that does not mean they need to be replaced. A preservation alternative would retain existing buildings and rehabilitate the landscape design while integrating sensitive infill development to complete the unrealized portions of the site. Adaptive reuse of the Courthouse could accommodate city employee overflow. Additionally, the unique design of the City Hall tower, with the structural columns on the perimeter of the building, would allow for extensive renovations to the interior to accommodate contemporary and future City needs, and allow the  building  to be brought up to current safety standards.

A cost analysis for rehabilitating the library concluded that it would be more cost effective than demolition and replacement.  Similar analyses have not yet been performed on the other buildings. In order to make an informed fiscally and environmentally-responsible decision, the City of Long Beach needs to conduct cost analyses on all the Civic Center’s components as they consider a preservation alternative that would rehabilitate the existing buildings and landscape. 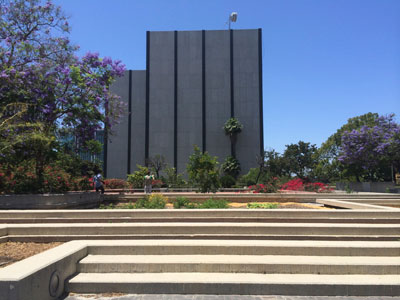 Long Beach Civic Center, photo by Sarah Gilbert.
A new Mayor and City Council are preparing to take office and your feedback is important in helping Long Beach understand the possibilities for its Civic Center.

Submit your comments to the Long Beach Mayor’s office. 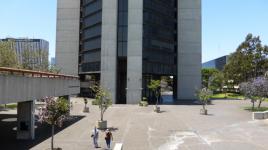