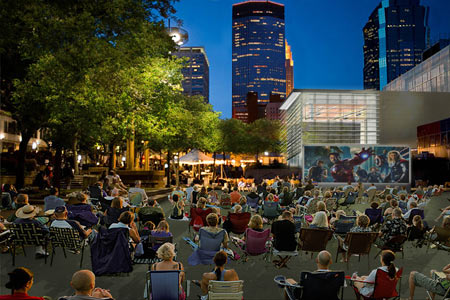 (top) Peavey Plaza basin in winter; (middle) Peavey Plaza café; (lower) Peavey Plaza
night viewThe design, first published in the New York Times and developed pro bono at TCLF’s request by Friedberg and MPFP llc / M. Paul Friedberg & Partners, is in response to the City of Minneapolis’ controversial proposal to demolish the modernist icon, which has already been determined eligible for listing in the National Register of Historic Places. The new concept addresses concerns by the City and neighboring Orchestra Hall about accessibility, safety, revenue generation and other issues while maintaining the site’s signature design elements. Preliminary budget estimates find this alternative rehabilitation scheme to be less expensive or comparably priced to the new plaza the City has proposed to build on the site. The new concept was introduced in advance of the City Council’s Zoning and Planning Committee meeting to hear the City’s appeal to overturn the Heritage Preservation Commission’s April 17, 2012, 8-1 vote to delay Peavey’s demolition. The City claims four final design options were developed before it concluded that there were “no reasonable alternatives” to demolition of the historic plaza; however, the City has never publicly released all four final options so there is no way to assess whether their “no reasonable alternatives” conclusion is verifiable or accurate. TCLF and PAM are putting forward this design concept to enlarge the discourse about the future of Peavey Plaza and to demonstrate that a more sustainable “reasonable alternative” to demolition indeed exists.

The new concept put forward by Friedberg updates the Plaza to address issues of accessibility, safety, revenue generation and other issues while maintaining the site’s signature design elements. The new concept also maintains the option for winter skating, a beloved activity at Peavey. To address accessibility, the new concept includes an elevator at the 12th Street side of the Plaza and a bridge/elevated walkway linking 12th Street to the Orchestra Hall’s new addition. The interior corner near 12th Street has been reconfigured to include a café, while an outdoor digital screen is introduced, clad to the retaining wall abutting the Orchestra Hall addition. This placement contrasts with the City’s Commons plan, which locates a video screen along the 12th Street perimeter, severing the historic visual link to the Westminster Presbyterian Church. 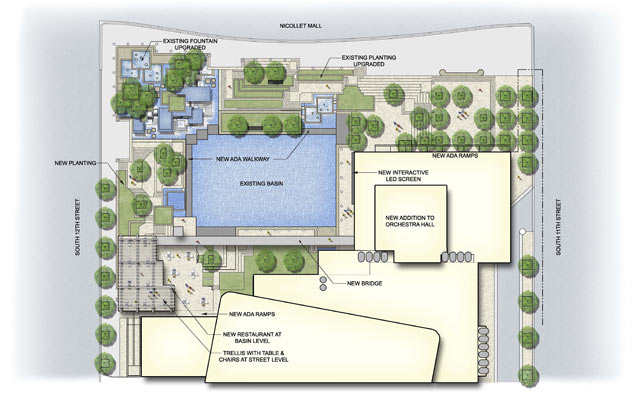