Garrett Eckbo's landscape architecture and the Richard Neutra and Robert Alexander designed structures at Orange Coast Community College are slated for demolition by the School District. 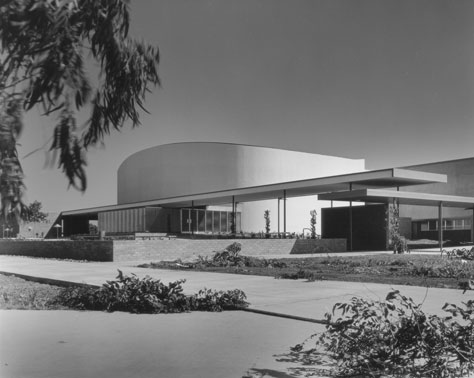 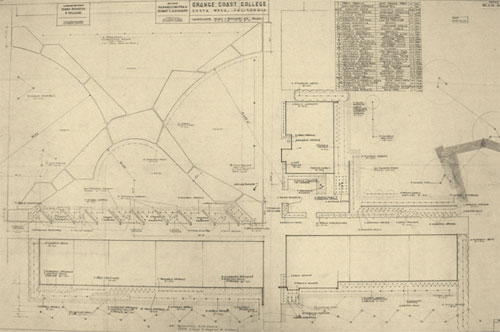 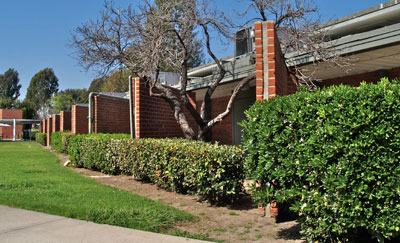 (upper) Theater Arts Building, 1954, Julius Shulman Photography
Archive, © J. Paul Getty Trust; (middle) Orange Coast College
Landscape Plan, Garrett Eckbo Collection, Environmental Design
Archives, University of California, Berkeley; (lower) Orange Coast
College, 2014, photo courtesy J. Linnert Architecture.Orange Coast College in Costa Mesa, California is one of three community colleges in the Coast Community College district. Its flagship campus, conceived after World War II, was constructed in the 1950s on a former army air base. Architect Robert Alexander was contracted by the District’s founding Board of Trustees to create a plan for the campus and initial buildings. Alexander partnered with internationally acclaimed architect Richard Neutra to design a series of six buildings for the campus. Together the two designed a pool stadium; Business Education classroom wing; Theater Arts and Music building (which has features similar to those of the 1961 Gettysburg Cyclorama building that was demolished in 2013), a classroom wing addition to a library previously designed by Alexander; a football stadium; and a Science wing and planetarium.

Neutra’s straightforward, regionally-inspired Modernist style is evident throughout the designs for the campus. The Neutra and Alexander glass and brick complex holds together as a historic district of low rise structures with interstitial transitions between public and private, outdoors and indoors. Large swaths of glass connect the interiors to the exterior landscape woven together with covered walkways and outdoor rooms for informal gathering. Such “rooms” are one of the hallmarks of Garrett Eckbo’s public landscapes.

On Alexander’s recommendation, Eckbo -- one of the twentieth century’s most lauded Modernist landscape architects -- and his firm, Eckbo, Royston & Williams, were hired to create a landscape design to complement the new buildings. Between classroom wings, Eckbo employed a natural path-making process by monitoring how students and faculty created foot-trails across the un-groomed earth, an idea recalling the “Trampelpfade” (paths trampled randomly over time by users) advocated by German landscape architect and writer Leberecht Migge. Eckbo created X-shaped walkways in the lawns separating the buildings and widened them at each corner to allow pedestrians to cut across the lawn. These paths were made from irregular, inexpensive poured concrete shapes that contrasted with Neutra and Alexander’s rectilinear buildings. An arc of Japanese mock-orange (pittosporum tobira) planted four feet on-center reinforced one edge of some of the intersecting pathways while separating the paving from the green campus lawn. Occasional trees dotted the landscape, in addition to copses of grouped plantings, another gesture common in Eckbo’s designs. 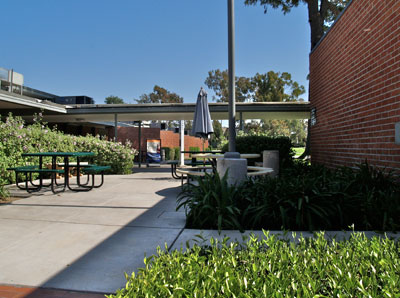 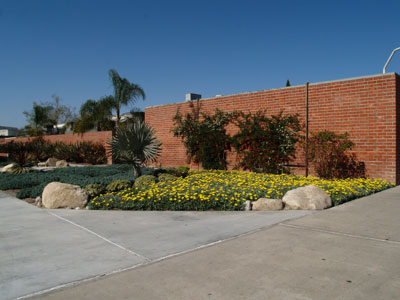 Since their construction, the original structures have been largely maintained with some “added” modifications to their original designs. These missteps would not be difficult to reverse. For example, insensitively applied rooftop mechanical equipment could be removed restoring Neutra and Alexander’s original passive design features and the buildings strong horizontal gestures, significant design attributes even for today. As a whole, the buildings are intact, possess a high degree of design integrity and have immense potential for renovation and repurpose.

Portions of Eckbo’s landscape design, especially the hardscape, are also intact. Though some of the original plantings specified were never implemented, or have been replaced over time, archival photos housed at the Garrett Eckbo Collection at the University of California Berkeley Environmental Design Archives, can inform paving and planting decisions today. These documents make possible the rehabilitation of Eckbo’s simple, cost-effective scheme. 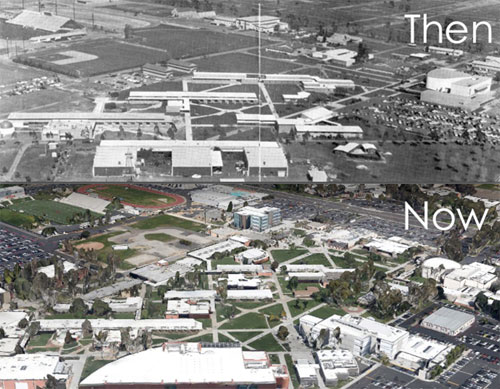 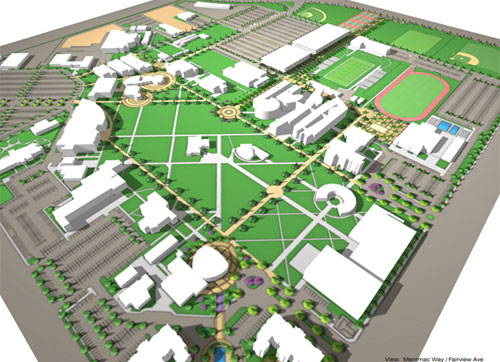 (upper) Orange Coast College circa 1958 (above) and 2014 (below);
(lower) Orange Coast College Master Plan Vision 2020. Images
courtesy J. Linnert Architecture.The Coast Community College district will receive monies from two Ballot Bond Measures awarded in 2002 and 2012. This funding, which could be in excess of one billion dollars, will be used to facilitate a new Master Plan. Titled “Vision 2020,” the plan would result in the demolition of the Neutra and Alexander-designed classrooms, library, business education building, and science wing, including the planetarium, and accompanying Eckbo landscape; and replace them with a “grand lawn.”  Rehabilitation of these sensitively designed productive buildings and landscape would be a more culturally and environmentally sensitive plan (especially in light of California’s severe drought cycle) than demolishing them and replacing them with turf.

The initial review stages of the proposed Master Plan have begun. A Draft Program Environmental Impact Report (PEIR) was completed in June 2014. A Historical Resources Technical Report provided as a requirement of the PEIR, concluded that these structures and landscape are significant cultural resources on local, state and national levels and could be eligible for listing in the National Register of Historic Places, and as such their demolition would precipitate a “Substantial Adverse Effect” on the environment.

Please send written comments with your voice of support to repurpose the Legacy Buildings and restore the Garrett Eckbo designed landscape. As directed by the Draft Program Environmental Impact Report (PEIR) the letter must be received before July 30th, 2014 via US mail to the following:

To view the complete set of Vision 2020 documents please connect to the following link,
http://www.cccd.edu/aboutus/master-planning/Pages/default.aspx

Julie Frazier-Mathews,
Secretary of the Board/District Director of the Office of the Board of Trustee
[email protected]