In the late 1950s, Richard Neutra designed and built the visitor’s center for Gettysburg National Military Park as a monument commemorating the battle. The building has since been replaced and now stands vacant.

The commemoration of a battlefield site traditionally involves erecting monuments and markers as symbols of heroism and grief. Architect Richard Neutra approached the design of a visitor center at the Civil War-era battlefield of Gettysburg, Pennsylvania, no differently. His Cyclorama Center, designed for the National Park Service (NPS) in the late 1950s to house a visitor center and an 1883 circular battle panorama by French artist Paul Philippoteaux, surpassed common expectations for tourist facilities by far. The master architect seized this late-life opportunity to apply his theories of “bio-realism” -- the creation of a built environment that not only served people but improved humanity – combined with a strong desire to establish a center for international equanimity during the stalemate of the Cold War.

Opened in 1962, the “Lincoln Memorial,” as Neutra called it, instituted an official NPS presence on one of the most visited historic sites in the country and provided a serene place for visitors to contemplate the wars of the past while resolving the conflicts of the present. The building sits at the northern boundary of the battlefield across the street from the National Cemetery. At the north end of the structure a series of concentric circles is created by the curved shape of the auditorium and the outer wall of a stark white rotunda which houses the painting gallery and exhibit area. Extending to the south is a rectangular office wing topped by a generous observation deck intended to provide tourists with an immediate, three-dimensional view of the landscape rendered in the cyclorama painting. Descriptive plaques along the deck help visitors link the tangled story of the battle with the panoramic view laid out before them. A reflecting pool parallel to the deck mirrored the adjacent drum and fractured the lines between the building and the sky. A concrete “spider-leg” post and beam, a signature Neutra element, reaches beyond the observation deck and connects to the landscape below.

Neutra’s memorial homage culminated in the “rostrum of the prophetic voice.” Enormous glass walls in front of the elevated platform disappeared and the auditorium wall pivoted so that people seated indoors and gathered in the outdoor assembly area would mutually face the speakers’ podium. “We should invite every year one of the great statesmen of the Nations,” he wrote in his notes. “It may be even a ‘Cold War’ enemy nation to speak before thirty thousand people about ‘What Shall Not Perish from the Earth,’” the last words of the Gettysburg Address. Where Lincoln spoke poignantly of the shattered Union between northern and southern states, Neutra dedicated his latter-day Lincoln Memorial to the cause of international harmony in a world threatened with atomic annihilation. 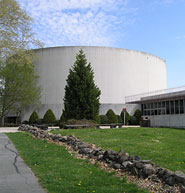 Unfortunately, Neutra’s message failed to reach its audience. The building’s high-concept features suffered from ill-repair and were eventually disabled or removed. In the early 1970s, NPS adopted an adjacent building as its main visitor center and the downfall of Neutra’s building began. By 2000, NPS was calling for the removal the Cyclorama Center to restore the landscape to its “1863 condition,” an unrealistic and impossible goal in light of more than one hundred years of urban development nearby.

In December 2006, the Recent Past Preservation Network, Dion Neutra, and the author filed a lawsuit to compel the Federal agency to comply with the National Environmental Policy Act (NEPA) of 1969 and the National Historic Preservation Act of 1966 governing the management and use of historic properties owned by federal agencies. Sonnenschein Nath and Rosenthal, one of America’s leading law firms, have donated more than $200,000 of their time and materials to resolve this case in the U.S. District Court and protect this National Register of Historic Places-listed building from further damage.

The National Park Service recently opened a new-style visitor center on another part of the battlefield and closed the Cyclorama Center to the public. Yet, the building still stands, a small comfort to preservationists who continue to hope that the stewards will fulfill its obligation to consider all environmental impacts and re-use alternatives when deciding the future of this one-of-a-kind design.