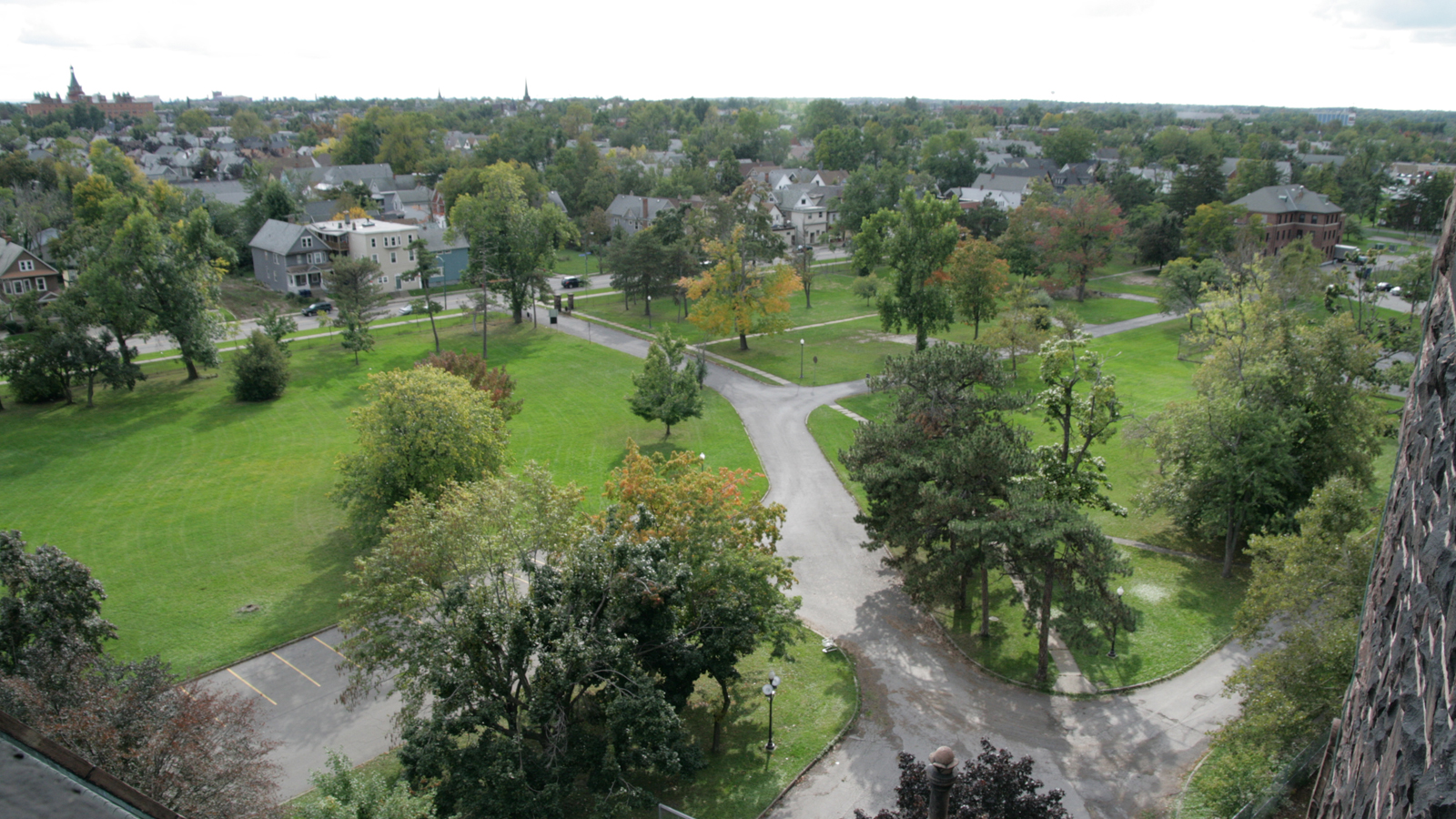 The Richardson Olmsted Complex, completed in 1895 as the Buffalo State Asylum for the Insane, was a partnership between noted architect H.H. Richardson and landscape architects Frederick Law Olmsted and Calvert Vaux. The complex, with its signature Gothic towers, became a National Historic Landmark in 1986 and supporters now hope to revitalize the site.

The Richardson Olmsted Complex was completed in 1895 as the former Buffalo State Asylum for the Insane. Designed by architect H.H. Richardson and landscape architects Frederick Law Olmsted and Calvert Vaux, the state of the art facility took more than twenty years to complete and spread out over 200acres of former farmland. It incorporated the most contemporary ideas in psychiatric care developed by Dr. Thomas Kirkbride, including therapeutic grounds intended to complement the innovative treatment practiced at the facility. 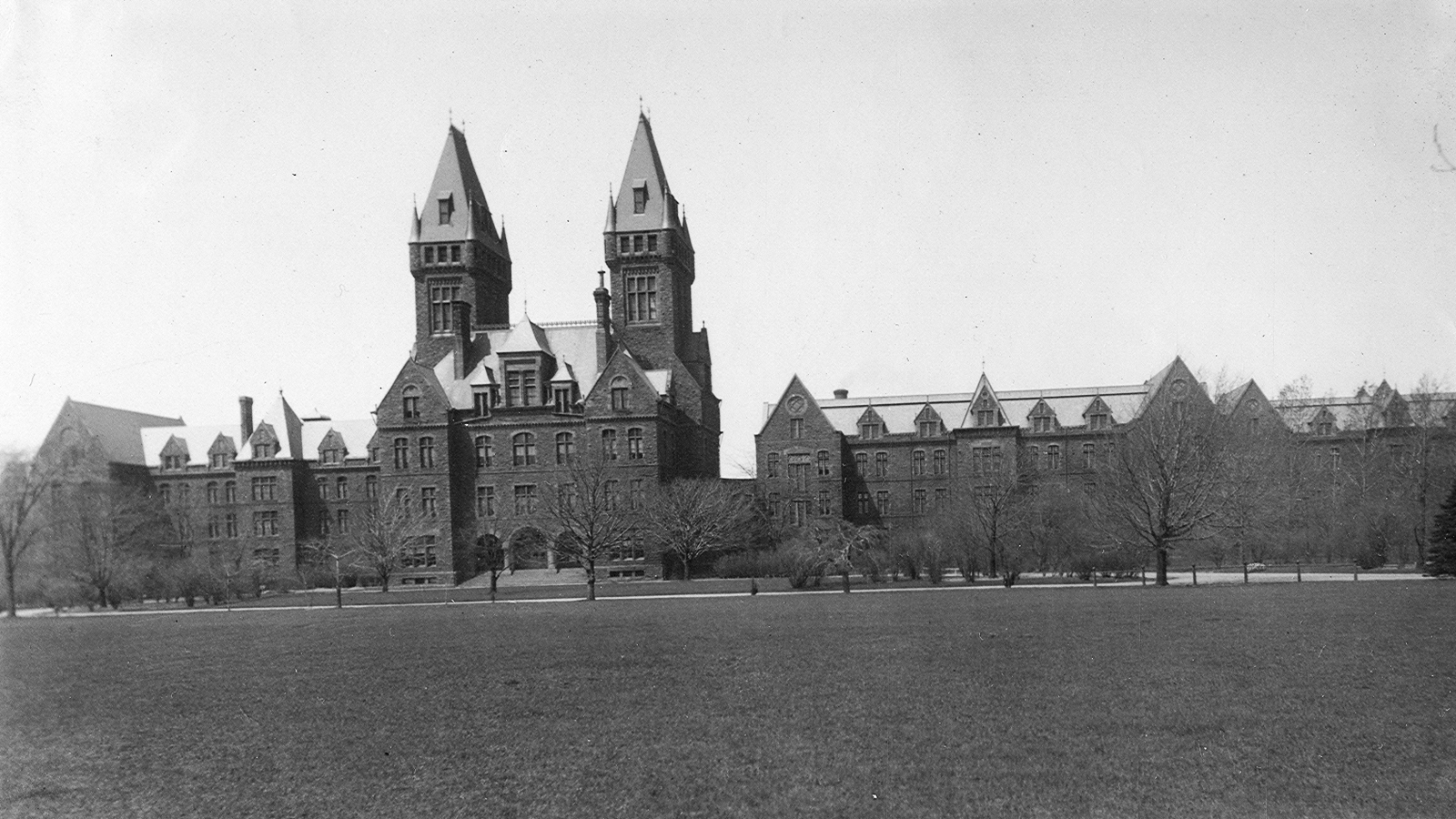 Olmsted and Vaux made initial recommendations to the faculty on the site selection and on the eventual siting of the buildings within the grounds. The Asylum was located adjacent to “The Park,” now Delaware Park in Buffalo’s Olmsted Park and Parkway System and Forest Lawn Cemetery, creating a vast open space north of the city center. Curvilinear drives and walks were laid out to access the grounds and frame the outdoor recreation spaces and gardens.

Richardson’s v-shaped building was set at an angle to maximize natural light and create a public area to the south and a private 100-acre farm and service landscape to the north which extended to the rear boundary of the grounds at the Scajaquada Creek.

The Olmsted and Vaux plan developed the asylum grounds to integrate the landscape with the medical treatment of patients. This was a remarkable innovation in this type of institution, marking a shift away from incarceration treatment and toward active therapeutic treatment of mental illness. Few of these therapeutic asylum landscapes exist today, and because of this, the historical significance of the Richardson Olmsted Complex is nationally recognized. (Richardson Olmsted Complex Cultural Landscape Report, p. 2)

In 1927, the site was reduced by half when a portion of the northwestern campus was severed and much of the farmland was redeveloped as Buffalo State College. During the 1960s, further changes took place including construction of a new building and demolition of the three brick buildings on the east wing to make room for an adolescent treatment facility. By the time the hospital ended treatment practices in the historic buildings in the 1970s, the facility known as Buffalo State Hospital had fallen into disrepair, and though it went on to hold administrative offices, the historic building and landscape had deteriorated from a lack of routine maintenance. 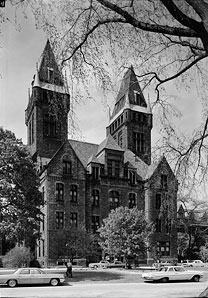 In 1997, after completing an extensive statewide Master Plan, the New York State Office of Mental Health announced its intention to divest itself of several psychiatric hospital sites, including Buffalo State Hospital. After years of pressure from concerned community members, preservationists, and City officials, Governor George Pataki dedicated funds in 2006 to rehabilitate the Richardson Olmsted Complex. Subsequently, Governor Pataki appointed the board of the newly-formed Richardson Center Corporation (RCC) to chart the future course of the rehabilitation.

The completed Historic Structures Report (by Goody Clancy) and Cultural Landscape Report (by Heritage Landscapes) provide detailed documentary, graphic, and physical information about the property's history and existing condition and serve as a guide for rehabilitation as plans for reuse proceed.

The Master Plan, led by the architecture and urban design firm of Chan Krieger Sieniewicz with numerous supporting consultants, is complete. The first phase of the proposed mixed-use campus will include a core set of integrated elements—Architecture Center, regional Visitor Center, boutique hotel, and event space—in the iconic towers administration building and two flanking former wards. The funds and interest generated from these first projects will then be directed into completing the next phases, including stabilization and targeted landscape and circulation restoration.

The creation of an Architecture and Visitor Center will support and encourage architectural tourism in the region. For the first time, Buffalo will have a Visitor Center which tourists can easily reach from major highways, right in the heart of the museum district.

Landscape plans include rehabilitation of the South Lawn, Olmsted’s historic entry, and the north entrance. The circulation schemes modify the vehicular drives and pedestrian pathways to reestablish the character of Olmsted’s carriage drives and walks in a park-like setting. Reconfigured parking schemes along the proposed circuit drives will utilize creative solutions to minimize the impact of surface parking.

The combination of the H.H. Richardson buildings and Fredrick Law Olmsted and Calvert Vaux grounds, developed for the treatment of the mentally ill, and the connection of the property to Buffalo’s architectural and landscape gems, make this a site of great importance. Additionally, the landscape is recognized as the first major collaboration between Olmsted and Vaux and Richardson. In 1986, the site became a National Historic Landmark.

While the immense size of the buildings and grounds contribute to the unique attributes of the site, it also plays a role in its vulnerability. The unusually large urban scale requires a costly rehabilitation. Significant changes to both the buildings and landscape have taken place over time. However, the current site retains much of the original therapeutic setting and feeling that motivated its creation 130 years ago. It is an intact site thoroughly illustrating the evolution of the treatment of mental health in the United States from 1870 to the present.

However, the tree canopy is suffering with only 1,106 of the 1,272 trees remaining. Of these trees, eight are over 45” caliper and were likely present at the time the site was selected for the asylum. The trees are in fair to poor condition, due to lack of care and the severe 2006 October storm which caused widespread damage to 85% of the region’s trees. 12% are in good condition and require no canopy work, 50% in fair condition requiring minor pruning or canopy work, 22% are in poor condition and require considerable tree canopy work, 9% are failing, and 7% dead. 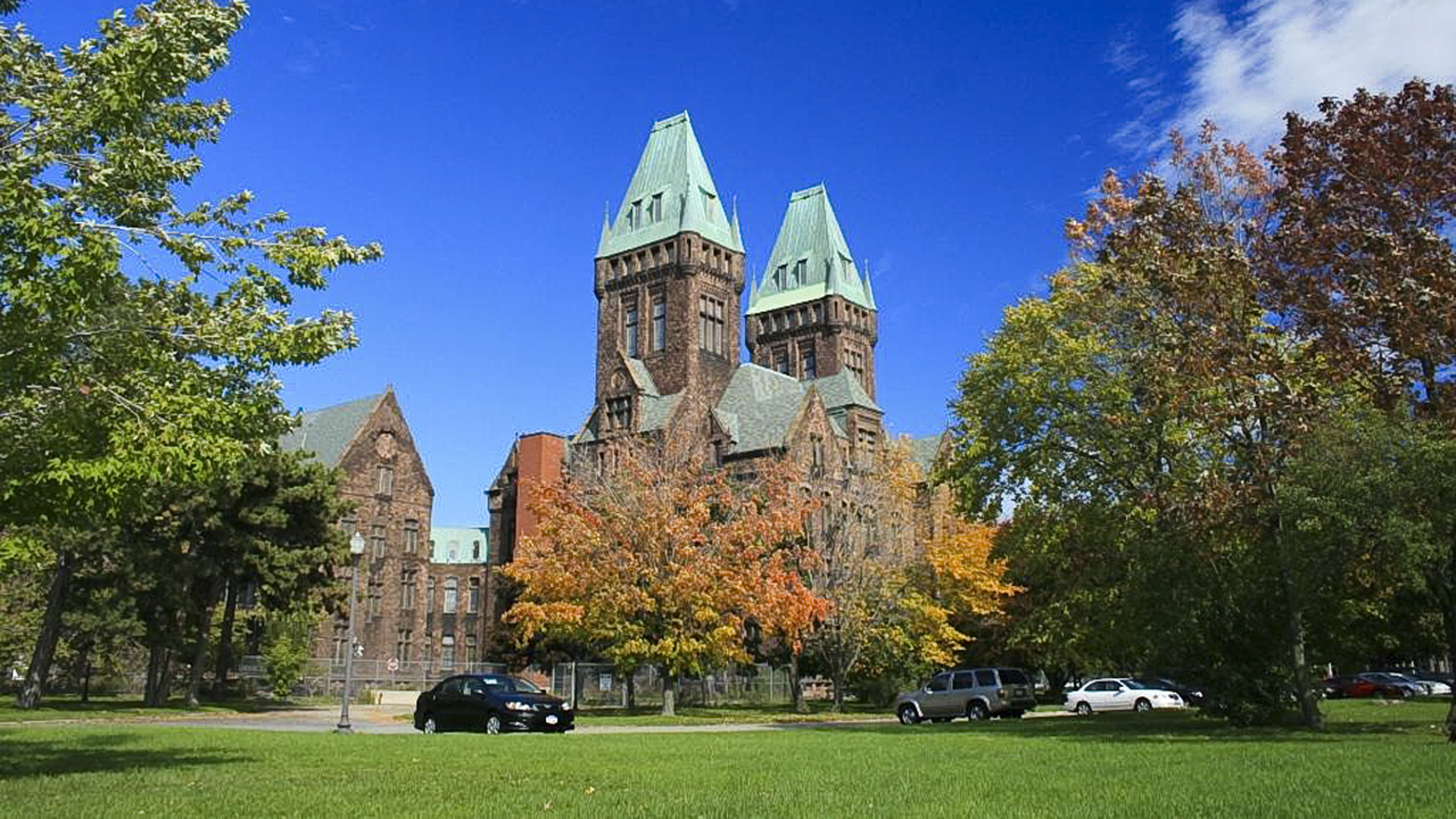 Informing the public about the progress of the efforts to preserve and develop this unique resource is essential to continued support of funding for its rehabilitation and reuse. Public advocacy for the project, in the form of written statements to state and federal elected officials, will support this important opportunity to revitalize this world renowned National Historic Landmark as an economic catalyst for Buffalo.

The Richardson Center Corporation is a not for profit entity, and donations to assist with tree rehabilitation and planting would provide the funds needed to accomplish this important activity. 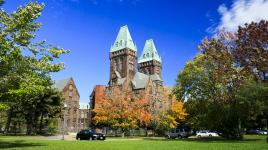 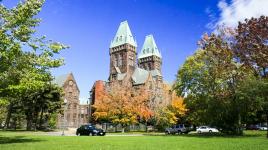