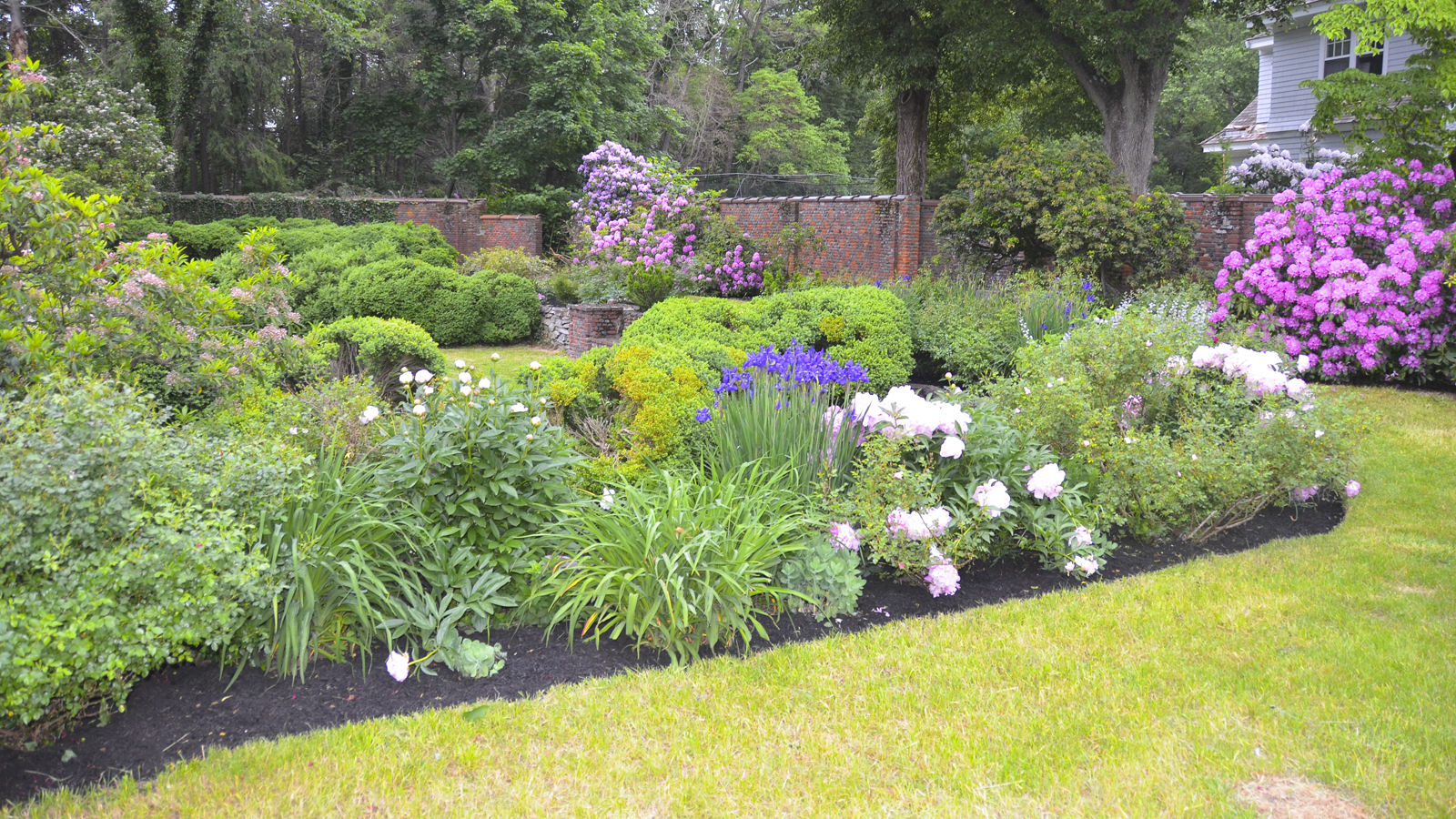 The last remnant of the grand Spalding estate in Milton, Massachusetts, is a garden designed by Fletcher Steele, a pivotal figure at the advent of Modernist landscape architecture in America. The garden was saved from destruction by the Milton Garden Club, which purchased it and began its rehabilitation. But there are no longer sufficient funds to maintain the garden, and a failure to do so could legally forfeit it as a parcel ripe for development.

In 1924, Philip and Katherine Spalding commissioned landscape architect Fletcher Steele to design gardens around their twelve-acre estate in Milton, Massachusetts. Philip Spalding was president of New England Telephone and Telegraph, and his wife Katherine was a member of the local garden club. Their estate, with its sprawling Georgian Revival mansion, was one of the finest in the area. Steele undertook the design of the grounds, working until 1928 to complete what is now known as the Spalding Garden. Often considered to be America’s first Modernist landscape architect, Steele’s work and his iconoclastic writing would inspire generations of practitioners, including Dan Kiley and Garrett Eckbo. The commission came to Steele at an important time in his career. In 1925, he traveled to Paris, where, at the Exposition des Arts Decoratifs, he experienced gardens whose designs, materials, and uses of plants were revolutionary.

For the Spalding estate, Steele positioned the formal gardens to the northwest of the house, preserving views from the south-facing rear of the house towards the expansive lawn and meadow. Walkways entered the formal gardens, which included a bowling green and a rose garden, through breaks in the encompassing eight-foot-tall brick walls. He lined the bowling green with double allées of elm trees, framing views of the Great Blue Hill to the southwest, while rhododendrons planted beneath the elms and perennial borders around the perimeter reinforced the sense of enclosure. Two sets of bluestone steps connected the bowling green with the rose garden to the north, which was designed as a terrace at a higher elevation. Steele framed the terrace with stone walls, forming an oval-shaped garden with evergreen shrubs planted within its eastern and western apses. 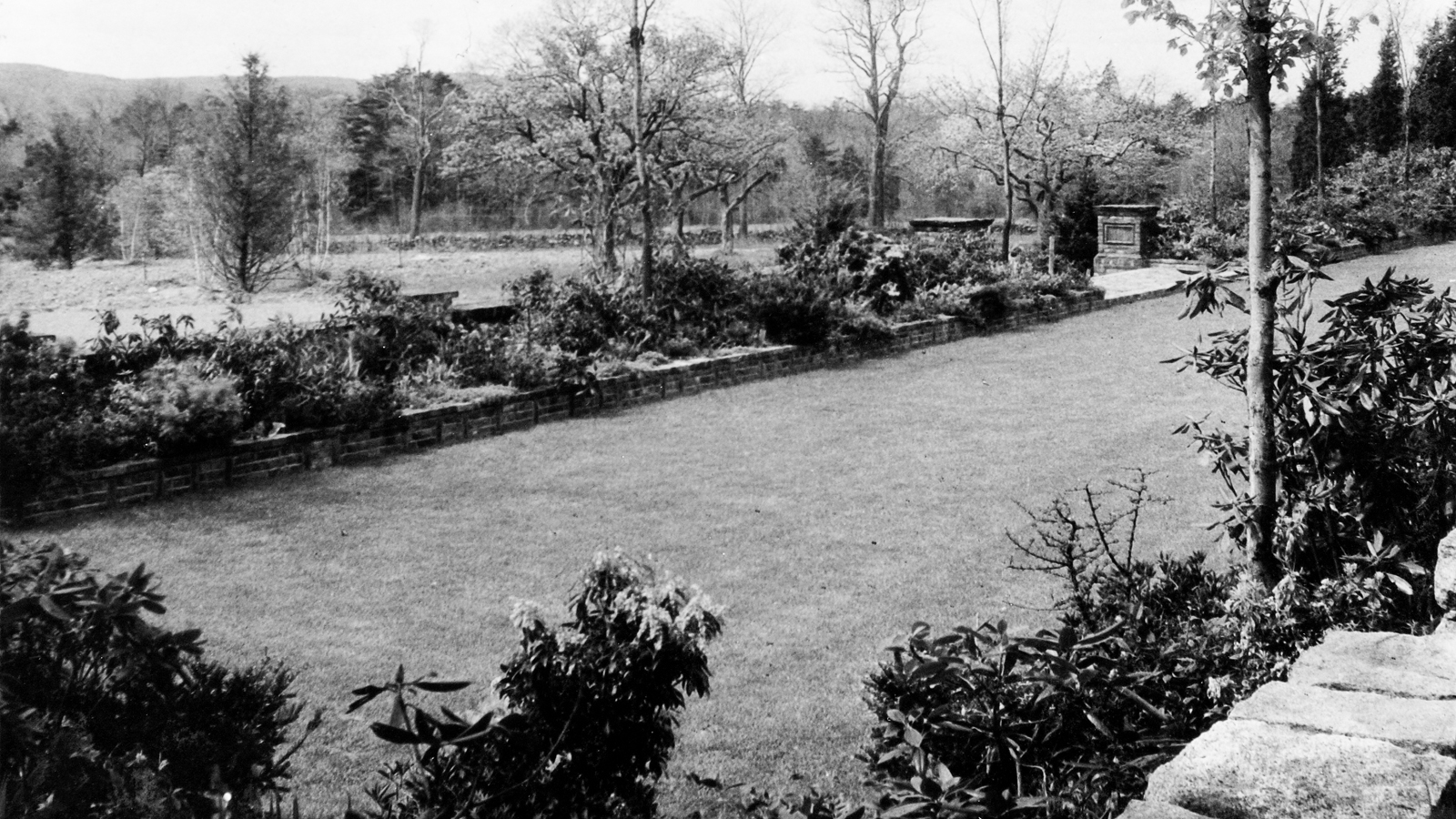 The bowling green in the Spalding Garden, circa 1928 - Photo courtesy of Christine Paxhia

Steele worked primarily on the private estates of the wealthy, many of which have been sold and redeveloped. Very few of the hundreds of gardens he designed exist today. Perhaps his most famous design was that at Naumkeag, the 40-acre summer estate of the Choate family in Stockbridge, Massachusetts, where Steele worked from 1929 to 1956, exploring abstract forms, dramatic uses of color, and industrial materials. The patterned brick walls that embrace the Spalding Garden resemble those at Naumkeag, which has been designated a National Historic Landmark, and is now owned by The Trustees of Reservations. Steele’s work at the Spalding estate ended in 1928, but landscape architect Ellen Shipman continued work on the garden over the next decade.

After the Spaldings died, the estate was sold to the Archdiocese of Boston and became a residence for retired priests. In 2004, the archdiocese sold the property to a developer who planned to demolish the house and gardens. The Milton Garden Club was able to purchase the garden that same year for one dollar. The house and other surroundings were subsequently demolished and new homes were erected. Today, the garden occupies a half-acre of land, and the walls, hardscape, and fountain of the bowling green and rose garden remain, along with many of the original trees and evergreen shrubs, including holly, boxwood, rhododendron, and mountain laurel. Two original linden trees also remain planted just beyond the walls. 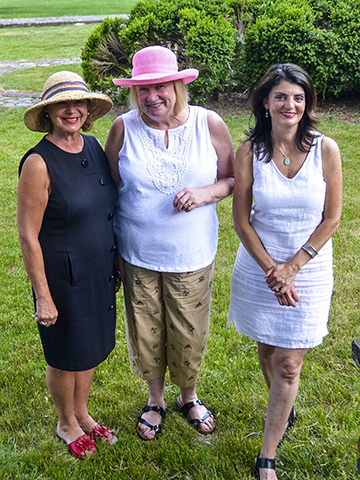 After ten years of progress in rehabilitating the once-overgrown Spalding Garden, a lack of funds has now brought new efforts to an impasse. When the Milton Garden Club acquired the property, it became responsible for preserving and rehabilitating the garden. After spending over $30,000 on restoration efforts, the garden club's membership considered new strategies to obtain the financial and human capital necessary to maintain and further rehabilitate the garden. But if the garden is not maintained, it could legally revert to the developer who bought and demolished the Spalding estate. Volunteers from the Milton Garden Club and the Massachusetts Master Gardener Association have done most of the restoration and maintenance work. Considerable funds have been spent on insurance, the removal of fallen trees, the repair of damaged brickwork and masonry, and on the critical research necessary to inform the historic preservation efforts.

The garden is opened upon request to the public, garden clubs, and enthusiasts. Fundraising efforts are now being led by a newly formed auxiliary, Friends of the Fletcher Steele Garden. Financial support is needed immediately to re-point the classic brick staircases in Steele's design, and there are numerous other projects that will help return this garden to its historic splendor.

Contact Christine Paxhia, president of the Milton Garden Club, to offer your time and effort as a volunteer, or to donate funds to help preserve, rehabilitate, and maintain the Spalding Garden. 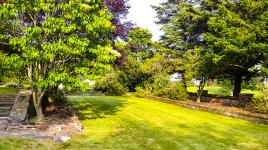