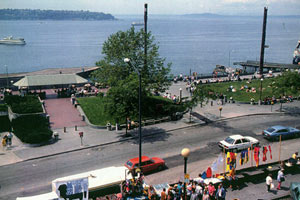 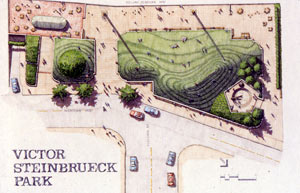 During the Great Depression, farmers clustered along Seattle’s Pike Place selling produce from their wagons directly to consumers at affordable prices. Through the decades, the market evolved into a maze of stalls, shops, and restaurants. In the 1960s, the City of Seattle proposed the replacement of the market with a world trade and convention center as part of its larger movement towards urban renewal. Victor Steinbrueck, teacher, architect and historian, led a counter movement to “Save the Market.” After many months, he successfully formed a coalition of preservationists, including myself and landscape architect Laurie Olin, and gathered enough signatures to validate an initiative. Overruling elected officials, community members voted to preserve Pike Place Market.

In 1980, the Pike Place Market Historical Commission (PPMHC) urged the Seattle Design Commission to retain Steinbrueck and myself to design a park to “anchor” the Pike Place Market and afford the only upper level public prospect of Elliott Bay and the Olympic Mountains. Their main goal was to carve a 300-foot-long parking garage out the steep slope. The rooftop deck at street level allowed a continuous belvedere perched above the noisy Alaska Way Viaduct. The popularity was immediate and it remains the most “populated” park in Seattle complementing one of the oldest and finest farmer’s markets in the U.S.

The park was designed to harmonize with the traditional market setting and surrounding buildings. Located at the north end of the market, the park’s lawn occupies the center of the 0.8 acre site. Benches line wide paths around the perimeter, and picnic tables sit below a metal pavilion in the southern portion of the site. At the park’s northern corner is a sunken pentagonal plaza which serves as a children’s play area. 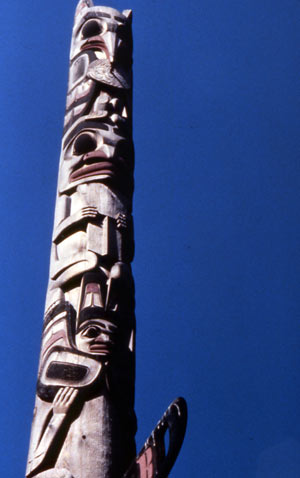 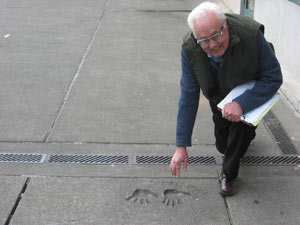 The park’s position high above the Viaduct offers 160-degree views of Elliott Bay, the Olympic Mountains, and Mount Rainier. When it opened, it was the only downtown public open space that could claim this expansive panoramic view, framed by two 50-foot totem poles. Symbolic expressions of the Northwest Native People, the poles were designed by Martin Oliver and Jim Bender, with ironwork by Roman Torres, wood carving by Buster Simpson, and handprints by Haag and Steinbrueck.

Shortly after Steinbrueck’s death in 1985, the City Council voted to consecrate the park as a memorial to Victor Steinbrueck. The Pike Place Market Historical District was expanded to include Victor Steinbrueck Park as a means of preserving the park for the public trust. This designation has helped to successfully thwart encroachment from adjacent restaurants seeking to use the space for outdoor dining areas and the insertion or removal of sculpture and furniture that would significantly alter the original design. This precaution has successfully fended off several threats to the park’s design integrity. Examples include the following:

• Insertion of sculpture inappropriate to the existing approved works.
• Restaurant encroachment for an outdoor dining area.
• Attempts to privatize the park as a “landing pad” for a waterfront-to-market aerial lift.
• Acquisition of the market and park by an outside investment consortium. (Peter Steinbrueck, son of Victor, led the cause to prevent the acquisition.)
• Threats by condominium developers to block territorial views (a costly partial win).

However, threats to the public space continue to exist. Most recently, the Women's Housing, Equality and Enhancement League (WHEEL) sought to create a “public place of beauty and hope: A Place of Remembrance to honor homeless people who’ve died in King County.” After several informal meetings with the PPMHC (open to public comment), WHEEL officially proposed a scheme to level the children’s play circle and erect a metal spathe-like form entitled “Tree of Life” uplighted through a platform of glass. In January 2010, the PPMHC voted unanimously to reject the proposal citing numerous violations of its guidelines. Despite the defeat, WHEEL appealed to a Hearing Examiner. On June 1, the Hearing Examiner overruled the PPMHC. The dispirited Historic Commission was unable to mount an appeal, but has since issued more stringent guidelines to fend off future attempts to “improve” the park.

The Seattle Parks and Recreation department has also proposed “improvements” to the space that threaten several significant character defining features. The plans include removing the shelter, flattening the earth sculpture, and removal of existing benches along with several other significant changes to the design. The Friends of Market intend to appeal the earmarking of $2 million for such renovations, but seek community support to help bring attention to the significance of such changes.

Public parks are the keystone of our democratic structure. They must be accessible to all classes of society. Parks offer visitors a certain freedom of action, a claim, even temporary ownership tempered with a sense of sharing. Work to retain the park’s original plan has been spearheaded by constant vigilance, and by hours of pro bono research, writing letters, emailing, blogging, and attending hearings. Frederick Law Olmsted was aware of the inevitable attempts by “other forces” to encroach and privatize, locate gratuitous memorials etc into free public parks and the American Society of Landscape Architects Policy Statement on Memorials was produced as a refinement of F.L. Olmsted’s admonitions (see sidebar). As we move forward in protecting this space for the public trust, it is important to understand that a knowledge of history can preserve the past for future generations.

As a result of the current economic crisis facing many cities today, alternative models for creative partnerships are being sought for public spaces such as Victor Steinbrueck Park. Like most cities Seattle is looking to private enterprises to solve the City’s budget problem—particularly with regards to the City’s Department of Parks and Recreation [SDPR]. It is within this context that today’s stewards should recognize that Victor Steinbrueck Park is the only public open space at Pike Place Market (in fact there are few public open spaces in Seattle’s CBD).  As a result of this situation, guiding principles for the park’s ongoing care and management should:
Letters of support should be sent to:
Mayor
Mike.McGinn@Seattle.Gov
Councilmembers
Nick.Licata@Seattle.Gov
Mike.Obrien@Seattle.Gov
Richard.Conlin@Seattle.Gov
Sally.Clark@Seattle.Gov
Bruce.Harrell@Seattle.Gov
Sally.Bagshaw@Seattle.Gov
Tim.Burgess@Seattle.Gov
Tom.Rasmussen@Seattle.Gov
Jean.Godden@Seattle.Gov
Acting Superintendent:
Christopher.Williams@Seattle.Gov
Board of Park Commissioners staff, Sandy Brooks:
Sandy.Brooks@Seattle.Gov
Pike Place Market Historical Commission staff, Heather McAuliffe
Heather.McAuliffe@Seattle.Gov
Thaisa Way, Associate Professor, Department of Landscape Architecture University of Washington tway@u.washington.edu
Paul Dunn fessdunn@aol.com
Peter Steinbrueck PeterSteinbrueck@comcast.net