On the Waterfront: Christopher Columbus Park

On the Waterfront: Christopher Columbus Park

Designed in the mid-1970s by Sasaki Associates, this revolutionary design reclaimed Boston's harbor by commemorating its former industrial past.

What could have been a formulaic urban renewal project became instead one of America's earliest waterfront parks of the modern era - and one that established a national design standard. Today, the future of this park is uncertain. After several years of neglect, a new landscape plan has been proposed which sweeps away nearly all the elements of the original design. Unfortunately, the new work displays no commitment to the historic significance of this pioneering urban revitalization project.

In the 1950s, the Boston's downtown waterfront was no longer the vital focus of the city's economic activity as it had been for more than two centuries. Its massive 19th century granite wharf buildings, symbols of strength and prosperity, were underutilized and derelict. The elevated Central Artery divided the Waterfront from the rest of the downtown. The water's edge between Long and Commercial wharves (the future site of Waterfront Park) was walled off by chain link fence and rows of tin warehouses, with four lanes of traffic on Atlantic Avenue. Like many other cities, Boston had ignored its waterfront. 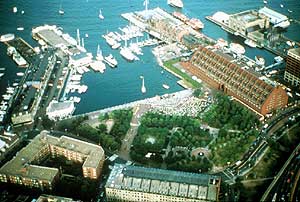 Reacting to post-WWII stagnation and suburbanization, Boston's leaders saw new possibilities. As part of urban renewal planning, a civic design group convened by the Boston Redevelopment Authority (BRA) envisioned a concept for a "Walk to the Sea". This walk extended from the emerging new Government Center to the historic waterfront.

While Boston's urban renewal program, one of the first and most dynamic in the country, began in earnest in the 1960s, it was in the 1970s that waterfront revitalization matured.

The 1970s were a significant period in Boston's history. There was renewed interest by both the public and private sectors in restoring the city, particularly the abandoned waterfront. The innovative New England Aquarium was a lively waterfront destination. Alternatives were explored for restoring the nearby 1820s Quincy Market buildings, adjacent to the new City Hall in Government Center. To complement this private sector initiative, the Mayor and the BRA director committed public funds for a new waterfront park. To be completed for the Bicentennial, the park would extend the pedestrian spaces of Quincy Market to the waterfront. The "Walk to the Sea" became a reality.

In 1974, Sasaki Associates was selected to plan and design this new waterfront park. Sasaki Associates had previously designed Copley Square in Boston, as well as Greenacre Park in New York in 1971. Boston's design process spanned many months and involved consultation, collaboration and reviews with the community, the BRA, various City departments including Parks and Recreation and Public Works, and noted historians. The design of the park expressed client and community input, combined with the Sasaki firm's technical evaluation of soils and subgrade utility conditions. They were mindful of the historic lines and grades of the 19th century site (the park was sited on filled land that had once been part of the harbor). Two years later, in July of 1976, thousands watched from the newly dedicated Waterfront Park as the "Tall Ships" paraded into Boston Harbor.

The new park along with the opening of Quincy Market helped serve as a catalyst for further waterfront development and was the foundation for a commitment to increasing public access all along the inner harbor. It has triggered millions of dollars in private investment and many new miles of walkways and public spaces along the water's edge. At its peak, it was a prime location for public events of all kinds. But far beyond its local impact, Boston Waterfront Park served as a model for other cities that sought to take a new direction in urban planning and policy following the "urban renewal" that tore entire older neighborhoods down rather than embracing them.

In 1994, a writer for the Waterfront Center in Washington, DC, noted that the "details used here are well chosen: The granite, brick, cobblestone, and wood features are both rugged and handsome, reflecting the area's early days as a prosperous port...."the combination of the spectacular event (Bicentennial/Tall Ships 1976), a well designed public waterfront park, and a popular marketplace (Quincy Market) has had an incredible impact not only on Boston, but on the planning, design, and development communities of the United States and the world." The park has received both local and national awards. The park was recently awarded an American Society of Landscape Architect's Medallion, one of only thirteen from the Commonwealth of Massachusetts, in celebration of the profession's centennial in 1999.

What makes the park particularly significant is that it is an exemplar of design within the physical and historic context of its site. This approach is a hallmark of the Sasaki firm's design philosophy; more importantly, it is representative of the challenge that faced many architects and landscape architects in the 1970s as they explored ways to design new spaces and places in an era of rapid urban change. The challenge in cities around the nation was to create new spaces that acknowledged their historic setting, answered the needs of the community, and expressed their own creativity at the same time. Boston Waterfront Park successfully met that challenge.

Few public spaces have had the impact that Boston Waterfront Park did when it opened in 1976. Recalling as it does Boston's long maritime history, the park continues to be a source of pride, a gathering place for people from Boston's neighborhood, downtown office workers and visitors to this historic city. Its neglect has been regrettable, but its loss would be inexcusable.

Over the past 25 years the City has been unsuccessful in adequately maintaining this park. Over the years, Boston Parks and Recreation (which inherited the park from the BRA) has not maintained it with any consistency or commitment, and the park has gradually fallen into disrepair through neglect. In spite of poor maintenance, the rather forlorn park remains a public destination. Embarrassed by the condition of a former urban gem, the City announced in 1999 that it planned to "restore" the park, but restoration has since given way to a wholesale redesign. The landscape is at extreme risk because the current City administration appears determined to erase the existing park design.

Write and ask them to reconsider the decision to raze the existing park. Encourage these agencies to rehabilitate and renew the existing historic park design to accommodate changing needs. Point out that the park as it was originally designed met, and continues to meet, the expressed goal of creating Boston's windows on the waterfront and on the world that is the legacy of the city's long and valued maritime past. Insist on the establishment of a maintenance endowment so that this heritage park will be protected. This pioneering work of modern landscape architecture must be preserved for future generations. 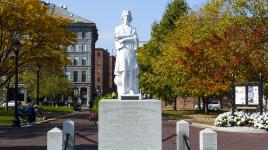