EDITOR'S NOTE: Landscape architect Laurie Olin recently sent the following letter to the Board of Trustees of the Frick Collection regarding the museum's plan to expand, which poses a threat to the Russell Page-designed garden in the museum's care. TCLF has recently suggested that the Frick's 2008 listing as a National Historic Landmark be amended to reflect an expanded "period of significance" to recognize the Page garden as an important work of landscape architecture.

I am writing as a concerned landscape architect regarding what I understand to be developments in your current building plans as they affect your beautiful and historic garden designed by Russell Page.

It has been my understanding that you have publicly stated your intention to keep the Page garden and not demolish it, but now I learn that current plans eliminate a substantial key and particularly interesting portion, namely the remarkable layered design of the north portion consisting of trees, plants, and a wall with a door. This would be a grave mistake and would destroy the design composition.

I have always liked this garden and admired Page. It is inconceivable to propose to eliminate the northern planting above and beyond the wall that Page used to give an illusion of depth and of a garden beyond it to the north.  The pear trees, wall, planter, and door are key contributing elements of the garden. His famous asymmetrical planting of four trees of different species plays off not just against the rectangular basin but also this uniform layered plane of green that one thinks the door goes into. It’s a thought worthy of Borromini if he’d had a green thumb, and a mark of Page’s genius and subtlety. These elements are not expendable, but the conclusion of a remarkably witty and brilliant solution to a difficult problem, that of a tiny urban space hemmed in by buildings – one that has challenged designers and artists since Roman times. I have on numerous occasions in my teaching graduate students in landscape architecture and garden design over the decades used this as an example of how a skillful designer can overcome the awkward problem of such a small space in a dense urban setting.

I urge you to save your Russell Page garden, the whole garden, not just some of it. 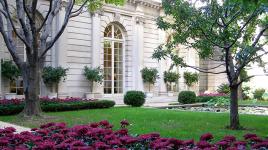 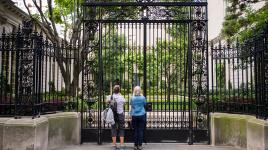 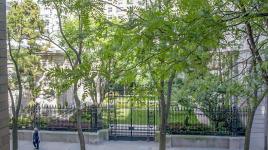 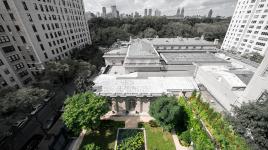 The Future of the Frick’s Page Garden Remains Tenuous
Jun 18, 2018
See all related