Located between the Washington Monument and the U.S. Capitol, the Smithsonian's Hirshhorn Museum and Sculpture Garden prominently displays more than 60 works of sculpture. Gordon Bunshaft, of Skidmore, Owings & Merrill, designed the museum and the garden, which opened in 1974. Three years later, landscape architect Lester Collins was commissioned to make the sculpture garden a more verdant, accessible, and sculpture-friendly landscape, which he did to critical acclaim. Collins' sculpture garden is now slated for a redesign by Japanese artist Hiroshi Sugimoto. Because the garden is a contributing feature to the National Mall Historic District, the project is under review in accordance with Section 106 of the National Historic Preservation Act. Although the review is still in its initial stages, it has thus far failed to recognize Collins' work as part of the garden's Period of Significance, which is essential for correctly assessing the potential adverse effects of any new plans.

The genesis of the Hirshhorn Museum and Sculpture Garden can be traced to 1938 when the Smithsonian was authorized by the U.S. Congress to create a museum of contemporary art on the National Mall. Unfunded for several decades until a benefactor was found in mining baron Joseph H. Hirshhorn, the museum was finally realized in 1966. A site along Independence Avenue was selected by S. Dillon Ripley, the secretary of the Smithsonian and Gordon Bunshaft of Skidmore, Owings & Merrill, an architect with a reputation for monumentality, was commissioned to design the building and sculpture garden in 1967. Early designs for the garden featured a sunken landscape that spanned the full width of the Mall between Jefferson and Madison Drives, with a large reflecting pool at its center. Although the plans were approved by reviewing committees, mounting resistance from the public and concerns about interrupting the long vista of the Mall caused Congress to weigh in and halt construction. The uproar prompted Bunshaft to present an alternate plan with a much reduced and reoriented sculpture garden. This revised design was approved by the National Capital Planning Commission (NCPC) and the U.S. Commission of Fine Arts (CFA) in 1971, and the garden opened to the public in 1974. Read more about the garden's history here. 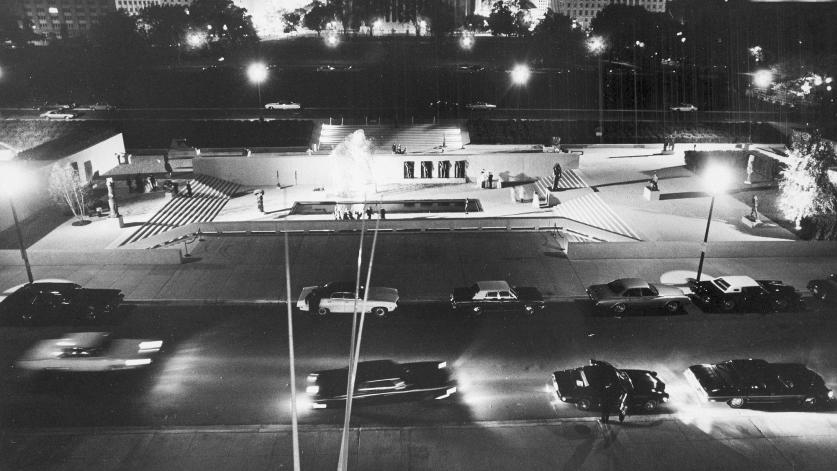 The complex comprised a museum building that was conceptualized as “a piece of sculpture in the Mall”—a drum raised one story above a surrounding plaza, with a curved, fenestrated wall overlooking a central, interior courtyard. Separated from the museum by Jefferson Drive Southwest, the sunken sculpture garden was reduced to 1.5 acres to correspond to the width of the museum plaza and reoriented to preserve the uninterrupted stretch of the Mall. Accessible on the north by wide stairs nestled between planters, and from the south by lateral stairs, the austere, rectangular landscape featured a low gravel terrace flanked by two sets of wide staircases on the east and west and lined by hedges to the north. To the southwest, a mature oak tree was preserved by the introduction of a platform at the level of the Mall. The garden was connected to the museum plaza by an underground tunnel beneath Jefferson Drive.

Soon after the garden's opening, it became evident that the unrelenting Brutalist landscape, sparsely planted and paved with gravel, was an inhospitable environment in the hot Washington summers. Furthermore, the tiered design presented difficulties for the elderly, the physically challenged, and visitors with baby strollers, who were unable to traverse the garden easily. Architectural critics were universally unimpressed by the design.

The sculpture garden or court that is one of the museum's principal features fights the large‐scale sculpture to a draw; the pieces seem to do battle with the hard, bleak geometry of their setting, losing scale and power. This garden is so lacking in grace that it will not close the controversy over whether it should have been permitted to extend into the open green of the Mall… [] … Why have the subtle, sensuous lessons of paving and planting and procession of spaces of the Museum of Modern Art sculpture garden never been learned? 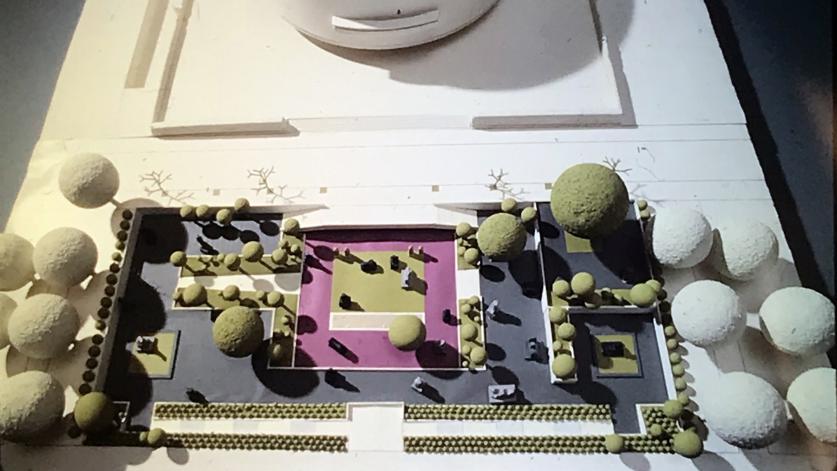 By 1976 the Hirshhorn Museum began to plan for the redesign of the sculpture garden. Programmatically, the new garden would need to feature discrete, gallery-like spaces for sculpture; ramps for accessibility; new surfaces to replace the gravel; a comprehensive lighting design (ultimately engaging the celebrated theatrical lighting designer Jules Fisher); extensive shading; and, potentially, additional levels. After much consideration, Lester Collins, a well-known, Washington, D.C.-based landscape architect who was a consultant to the Smithsonian's Office of Horticulture, was commissioned to redesign the garden in 1977. He would work closely with James R. Buckler, the director of horticulture, on the project. First a graduate, then a faculty member, and later dean of the Department of Landscape Architecture at the Harvard Graduate School of Design, Collins was already known for his work on several public projects in the city, including Georgetown University, the U.S. Naval Academy, and the Smithsonian National Zoological Park.

Working within the existing footprint of the garden, Collins transformed Bunshaft’s “desert-like expanse” into a shaded, choreographed journey through an urban park. Predating the 1991 American Disabilities Act (ADA) Standards for Accessible Design by more than a decade, the redesign aimed to afford every user a dignified arrival and a comparable spatial experience. Retaining the lateral stairs to the south, Collins introduced a central stair flanked by lateral ramps along the Mall side. Bordered by spreading English yew (Site Plan Phase No:2, Jan 11, 1978; Smithsonian Archives), screened from the Mall by trees, and fitted with bronze handrails, the textured-concrete ramps overlooking the garden allowed all visitors an initial glimpse of the reflective pool before pivoting to descend into the space. The garden’s circulation aisles and display areas were clearly defined, thereby increasing the space for displaying sculpture. The walkways, consisting of a dark grey, brick-basket weave, and irregular flagstones, encouraged users to circumambulate the sculptures, which were set upon precast shelves against generous swathes of lawn and white gumpo azaleas. Bunshaft’s reflecting pool was kept in its original form, and a concrete retaining wall formed the backdrop for the lower level, accessible by a ramp to the east and a stair to west. The internal ramp and stair were encased within angled concrete fins, enhancing the revelatory moment of viewing the reflecting pool. Collins chose trees that were heavily sculptural in form, including Babylon weeping willows, copper beeches, weeping beeches, ginkgos, Japanese black pines, cherry, and dawn redwood trees. With its East Asian-inspired features and sculptural landscape elements, Collins’ redesign is rooted firmly in a distinct legacy of Modernist landscape architecture, as also seen in the work of Dan Kiley, James Rose, Garrett Eckbo, and others. 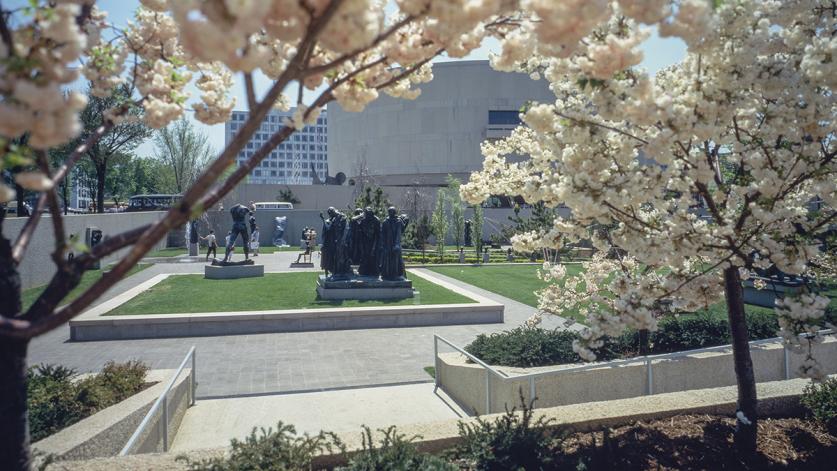 The parched severity of [the original sculpture garden] was not without merit, but the appeal was more to the mind than to the senses, more theoretical than practical…. The new design reinforces the identity of the garden as a welcoming urban park…. [This] park for art…serves the sculpture. The divisions of the space prove essential accents; artworks pop in and out of view as the spectator moves about the space….

The Smithsonian Institution, which owns the Hirshhorn Museum and Sculpture Garden, now plans to redesign the garden to meet its programmatic needs. The internationally acclaimed Japanese artist Hiroshi Sugimoto, whose extraordinary and transcendent work was the subject of a masterfully installed exhibition at the Hirshhorn in 2006, has been named as the designer. Because the garden is a contributing feature of the National Mall Historic District, a Section 106 review has begun in accordance with the National Historic Preservation Act (NHPA). The Cultural Landscape Foundation (TCLF) is an official consulting party to the ongoing federal review. During the initial Section 106 meeting on April 10, 2019, it became clear that the Smithsonian’s Office of Planning, Design, and Construction had limited the Period of Significance (POS) for the sculpture garden to 1974, thereby failing to recognize the potential adverse effects on Collins’ work at the National Register-eligible garden. Rather, it seems to attribute all aspects of the sculpture garden’s Modernist design to Gordon Bunshaft and the earlier, altered, 1971 plan by Skidmore, Owings & Merrill. Doing so completely ignores Collins’ executed Modernist redesign of the garden as it appeared in 1981, which established the circulation patterns, planting plan, display areas, and accessibility that remain in place today and, in most cases, possessing a high degree of integrity. This serious omission has been carried forward from the Determination of Eligibility (DOE) and its foundational document, the South Mall Campus’ Cultural Landscape Report (95% Draft, June 2015; CLR 95% Draft). 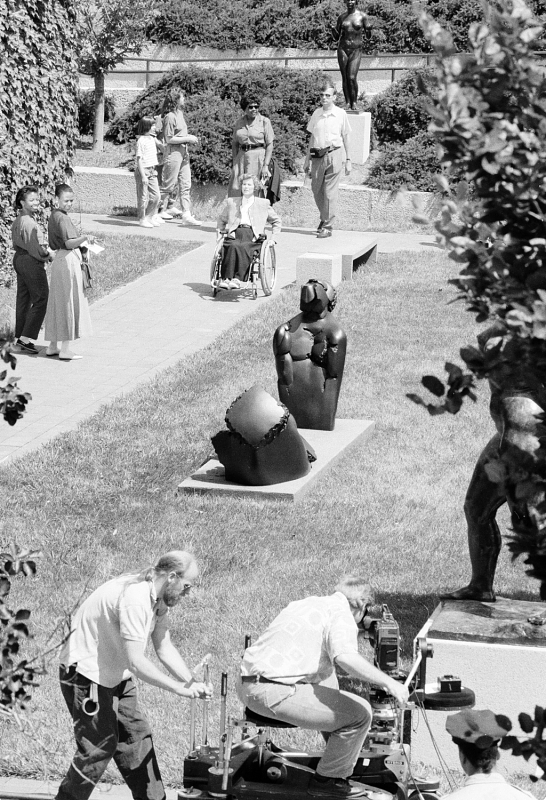 In fact, when TCLF was contracted to review the South Mall Campus' Cultural Landscape Report (50% submission; OFEO Project Number 731299616 Task 15) in 2015, we expressed surprise that Collins’ work at the Hirshhorn Sculpture Garden was not included in the garden’s period of historical significance. Those same concerns were reiterated in a review of a subsequent draft of the South Mall Campus’ Cultural Landscape Report (95% Draft, June 2015; CLR 95% Draft). Unfortunately, those issues remained unaddressed and have informed the DOE.

The DOE concludes that the sculpture garden qualifies for designation under Criteria A, C, and G, and expanding the POS to include Collins’ work would only bolster designation under those same criteria. The DOE states that the Hirshhorn Museum and Sculpture Garden is eligible under Criterion A for its “reflection of the evolution of both the Smithsonian Institution and the National Mall during the middle half of the twentieth century” and marks the “discernible shift toward Modernism in the character of the National Mall.” It also explicitly mentions that “[T]he development of the museum is also reflective of a concentrated period of growth experienced by the Smithsonian during the 1960s to 1980s.” Collins’ 1977-1981 redesign thus fits within the identified timeframe and is characteristic of the “shift toward Modernism,” a fact recognized by the D.C. Planning Commission.

Second, the DOE states that the garden meets Criterion C “as an outstanding example of Modernist architecture by a recognized master in the field, with a design that was closely tailored to its urban planning context as well as an associated collection of Modern and Contemporary art.” Although the above statement rightly applies to all Modernist design elements within the sculpture garden, the DOE confines its references to the 1974 design, naming both SOM and Gordon Bunshaft as pioneers in Modernist design but failing to mention the 1981 redesign or Lester Collins, who was most certainly a “recognized master in the field.”

Third, regarding Criterion G, the DOE acknowledges the “exceptional importance” of the garden in connection to Bunshaft and SOM’s architectural legacy, but it does not recognize Collins or his work, which meets the same required standard of exceptional importance that the document associates with the work of Bunshaft.

Finally, although the DOE seems to cast doubt on the current integrity of Collins’ 1981 redesign, the schematic plans presented at the recent Section 106 meeting indicate, rather, that there are more extant features, possessing a high degree of design integrity, from Collins’ redesign than from the original Bunshaft plan. Moreover, the DOE seems to characterize the 1981 redesign as merely introducing planting materials into the sculpture garden. That characterization, however, negates Collins’ role in introducing new formal elements, such as modifications to the lower level, reconfiguring the circulation pattern, redesigning the display areas for sculpture, and sensitively creating an integrated, ADA-compliant landscape well ahead of its time.

The ongoing Section 106 review is a public process, and input from the public is welcome. The first stage in the review was initiated on April 10, 2019, when the scope of the undertaking was presented. There will be several opportunities for public comment as the process continues, in particular when determining the Area of Potential Effects and identifying historic resources that may be adversely impacted.