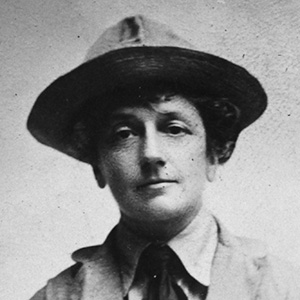 Statement: Mary Rutherfurd Jay (1872–1953) was one of America's earliest landscape architects. As a vocal advocate for the careers of women in the field, she would have applauded and admired the powerful message behind this 100 Women Campaign. Jay studied design and horticulture at the Massachusetts Institute of Technology, and also at Harvard’s Bussey Institute, with Charles Sprague Sargent in 1905. One of her first papers, written on the topic of “Tenement Gardening,” observed that even the poorest neighborhoods benefitted from the smallest gardens. Her ability to deftly adapt gardens to various soils, styles, and size constrictions later became a signature of her work.

She worked easily alongside established male architects like Addison Mizner, J. Alden Twachtman, and Francis Keally. In 1917, six years after trailblazing women such as Beatrix Farrand and Marian Coffin had exhibited their landscape work at the Architectural League in New York, Mary displayed her own designs. She exhibited a record five times, including in the years 1918, 1920, 1922, and 1929. Had she not served as a volunteer in 1919 with the American Committee for Devastated France, it is possible she would have had an entry that year as well.

As of 1917, she was also one of only three women listed in New York directories as a landscape architect (the others being Marian Coffin and Ruth Dean) and the only one leasing her own office in the prestigious Architect's Building at 101 Park Avenue. “Miss Jay” ultimately transformed more than 50 properties, as far south as Palm Beach, Florida, and as far north as Manchester-by-the-Sea in Massachusetts, for friends like New York housing reformer and architect I. N. Phelps Stokes, author of the monumental The Iconography of Manhattan, and conservationists like the Hudson Valley Reeses and Rockefellers.

Today, the Jay Estate, her family home in Rye, New York, where she designed a 100-foot-long rose arbor, is being reimagined. Nelson Byrd Woltz Landscape Architects is transforming Jay’s family gardens into accessible parkland and a center for horticultural education.