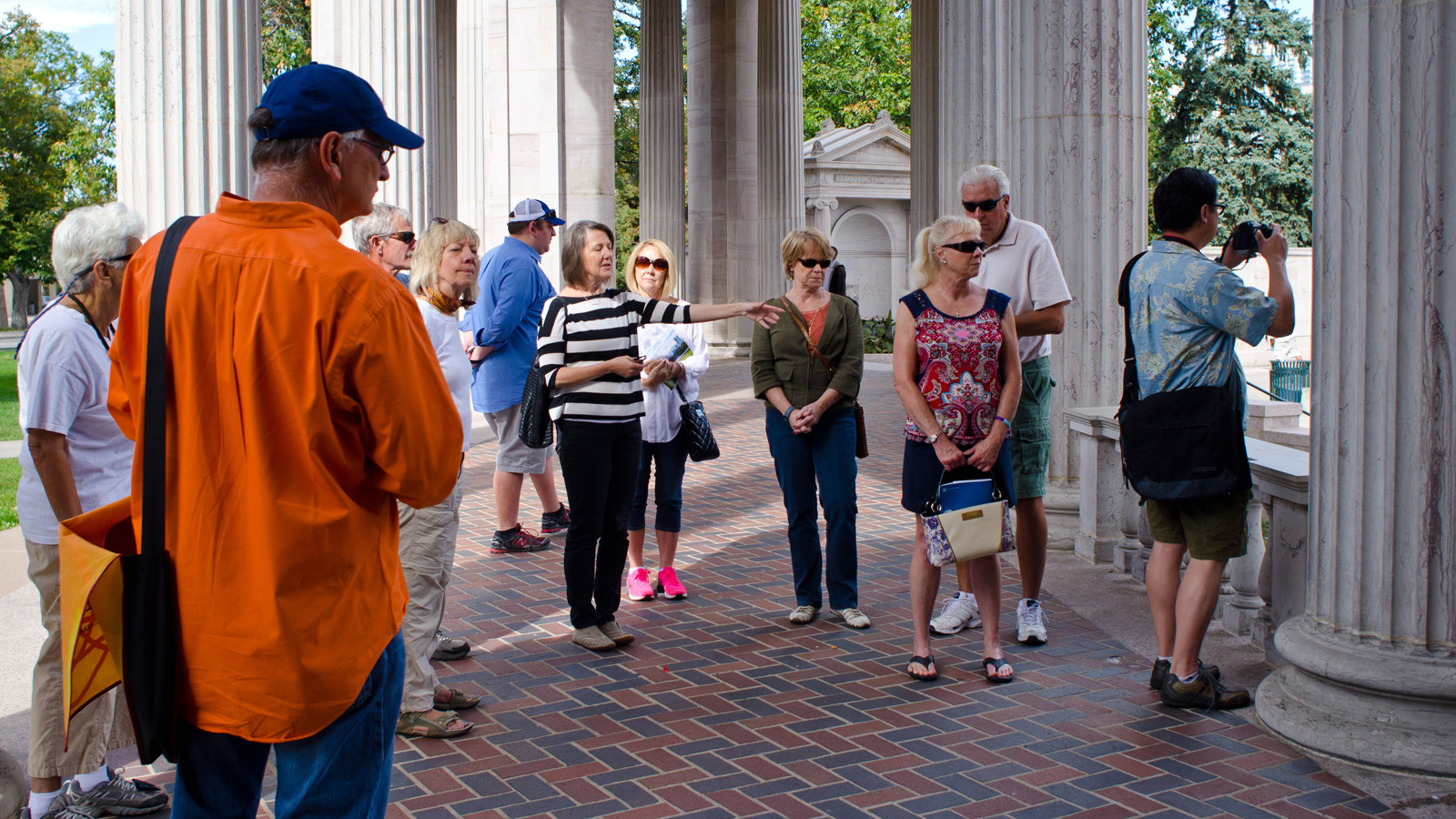 “In the end, the city became a work of urban landscape art, a garden city if you will. And the subsequent mountain extension of the system was promptly recognized as a unique tourist attraction and a gateway to the Rocky Mountains.”

What’s Out There Weekend Denver, held October 10-11, 2015, featured 21 free tours of the Mile High City’s most significant public parks and open spaces. Exceptional weather enabled attendees to explore the city on foot and on bicycles, and the tours ranged from the oldest park in the city—the nine-acre Mestizo Curtis Park established in 1868—to more recent projects along the South Platte River. At the former, local historian Bill West led tour attendees on a walk through the Curtis Park Historic District, one of Denver’s earliest neighborhoods, developed between 1885 and 1890. At the latter, Michael Bouchard, the City and County of Denver’s assistant director of design and construction, and Lori Catalano, associate chair of the College of Architecture and Planning at the University of Colorado, spoke about the importance of the South Platte River to the City of Denver. Their tour, which featured City of Cuernavaca, Commons, and Confluence Parks, focused on the process of reclaiming former industrial land for public open space. Bouchard, who also led a tour of Alamo Placita Park, spoke about the importance of community input in the park's planning, while Catalano reflected upon the complexities of using native vegetation in urban open spaces.

Along 16th Street Mall, a Postmodernist design developed by the architectural firm I.M. Pei & Partners in collaboration with landscape architects Hanna/Olin, tour attendees heard from a number of designers who had been involved in the Mall's initial construction in 1980. They talked about the selection of granite for the paving, the development of lighting and seating elements, and the strategies used to promote the health of street trees. One attendee of the tours remarked: “The guides were knowledgeable, congenial, and quite passionate about the mall. These elderly gentlemen had energy and information to share. I appreciated that they donated their time to educate and answer questions.” 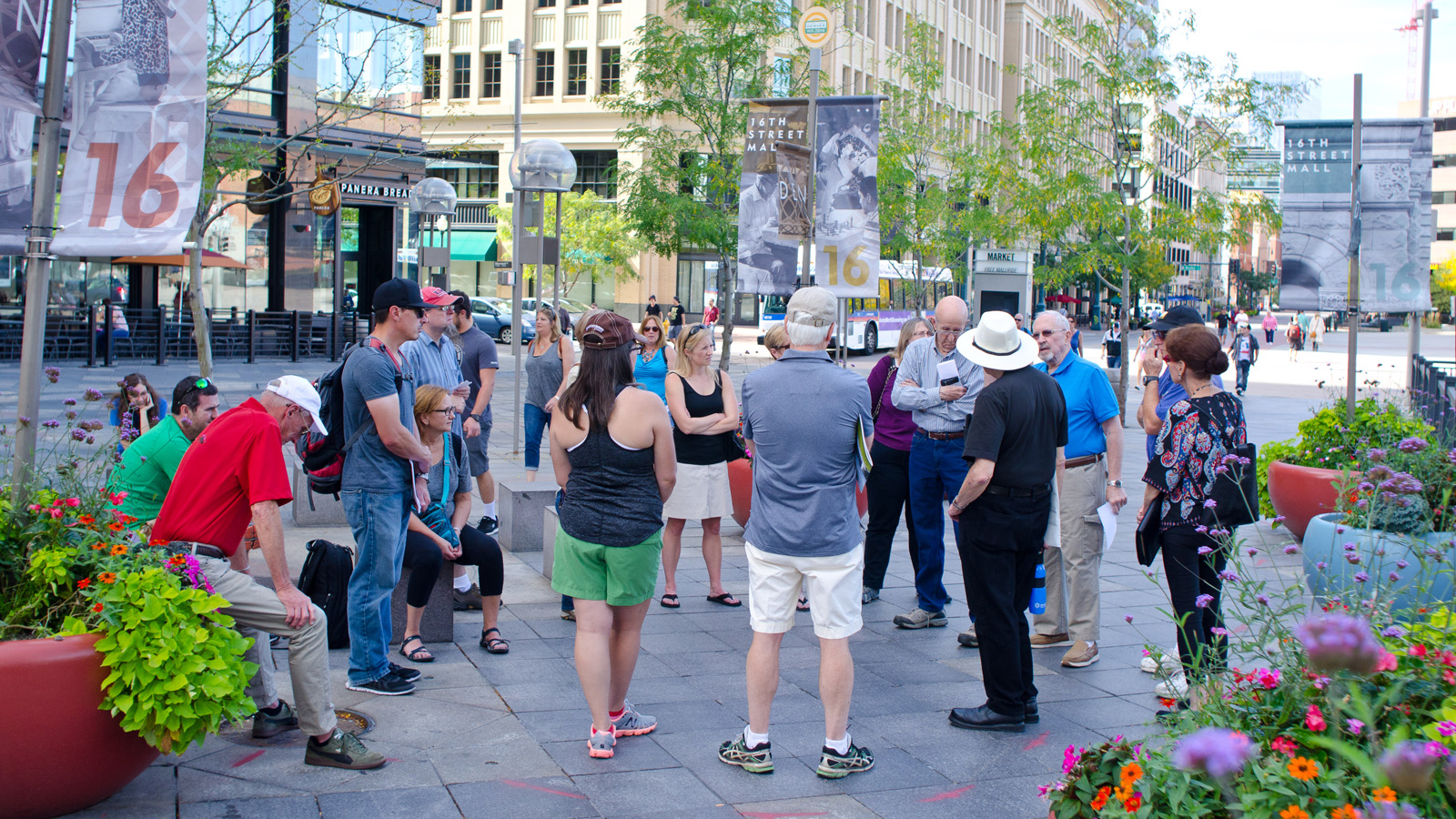 Tour attendees learn about the design of the 16th Street Mall - Photo by Matthew Traucht, 2015

A tour of the Modernist Babi Yar Memorial Park provided insights into the development, design, and revitalization of the thought-provoking commemorative landscape designed by Satoru Nishita and Lawrence Halprin. The tour was led by Alan Gass, an architect and advocate who was instrumental in the development of the initial design, and Tina Bishop, a principal at the Denver-based Mundus Bishop, who has recently completed an ambitious project to rehabilitate the landscape design. Following the tour, a participant said, “It was a great example of how a skilled landscape architect can transform a space in a meaningful way.” In another tour, Bishop provided background on her work at the Beaux-Arts Civic Center Park. She was joined by Dennis Humphries, principal at Humphries Poli Architects and vice-chair of the Civic Center Conservancy’s Board of Directors, and the two discussed the programming and stewardship of one of Denver’s most visited civic parks. Patrick Mundus, also a principal at Mundus Bishop, and his colleague Aicha Menendez, mounted their bicycles for a roaming, multi-stop tour of the Denver Park and Parkway System, which was listed in the National Register of Historic Places in 1986.

Another of the Mile High City’s National Register listings is the Denver Mountain Parks System, designated in 1990. Bart Berger and Erika Walker, chairman and member, respectively, of the Denver Mountain Parks Foundation, and authors of Denver Mountain Parks: 100 Years of the Magnificent Dream, led tours of two of the 22 parks in the system. At Genesee Park, they were joined by Mountain Parks Superintendent Dick Gannon, who provided an up-close and personal experience with the Park’s bison herd, which roams in wildlife preserves established a century ago. At Red Rocks Park—recently designated a National Historic Landmark—Tad Bowman, Red Rocks Venue director, joined the group to provide access to the backstage area of the Amphitheatre. Designed by architect Burnham Hoyt and constructed by members of the Civilian Conservation Corps, the venue was dedicated in 1941.

Tours of Berkeley Lake Park and Sloan’s Lake Park, led by Billy Gregg (principal of Studio CPG) and Paul Thomas (principal of Stream Design), respectively, elaborated on some of Denver’s recreational opportunities and the design interventions that are necessary to protect these high-desert water bodies. In Denver’s neighboring city of Aurora, landscape architect William Wenk also stressed the importance of ecological design principles: His Shop Creek project, which won a Merit Award in Design from the American Society of Landscape Architects in 1995, uses vegetation, ponds, and a terraced profile to remove sediment and pollution from stormwater before it enters Cherry Creek Reservoir. Wenk also led a tour of his Northside Park along the South Platte River —a design that transformed an abandoned water treatment facility into playfields flanked by post-industrial-ruins-cum-public-sculpture. On the opposite side of the river, a well-attended tour of Riverside Cemetery, led by Dr. Charles Chase from the University of Colorado and Patricia Carmody of the Fairmount Heritage Foundation, also focused on ecological design principles while providing background on the fascinating history of the cemetery’s location amidst industrial infrastructure. A tour of the Governor’s Residence at the Boettcher Mansion, attended by nearly 40 people, provided details about the stewardship of the mansion’s grounds, which were designed by Jane Silverstein Ries and Barbara Young. 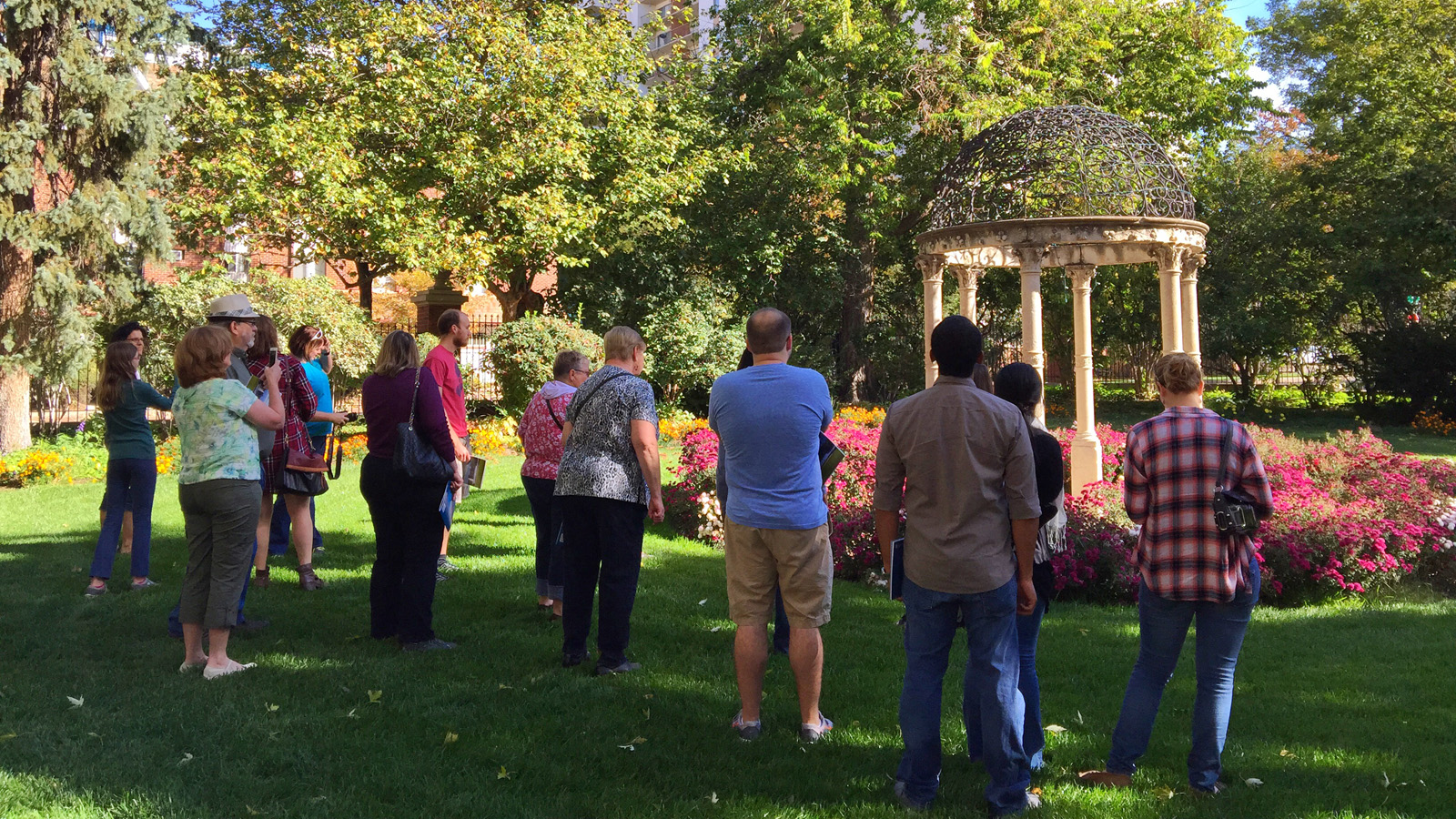 Tour attendees at the Governor's Residence at the Boettcher Mansion - Photo by Matthew Traucht, 2015

What’s Out There Weekend Denver was the fourteenth in the What’s Out There Weekend series. The program dovetails with TCLF’s What’s Out There database, launched in 2009, which now comprises more than 1,800 landscapes, 900 designer profiles, and some 10,000 images. The Weekends enable people to discover the design history of places they may pass every day but do not know about, as well as learn about the people who designed them, and more broadly, about landscape architecture and city shaping. What’s Out There Weekend Denver was made possible through financial support provided by a National Endowment for the Arts – Art Works grant, which is also funding a Weekend in Austin, Texas, November 21-22, 2015. Additional support was provided by Bartlett Tree Experts, Design Workshop, Mundus Bishop, Wenk Associates, and the Colorado Chapter of the American Society of Landscape Architects. Learn more about Denver’s exceptional landscape legacy with TCLF’s online, interactive What’s Out There Denver Guide.