The District of Columbia Historic Preservation Office, in a recently released and much anticipated 43-page document (called a “Determination of Eligibility”), has concluded that M. Paul Friedberg’s Modernist Pershing Park in Washington, D.C., site of a proposed World War I Memorial, is eligible for listing in the National Register of Historic Places. Authored by historical landscape architect Laura Knott, the determination is significant because it provides essential context for the discussion of the park’s future and counterbalances the consistently negative remarks about the Friedberg design made by representatives of the WWI Memorial Commission in their justification for a new design.

The document goes on to say: “Pershing Park is an exceptionally important example of this urban form of public space and of Friedberg’s work.” 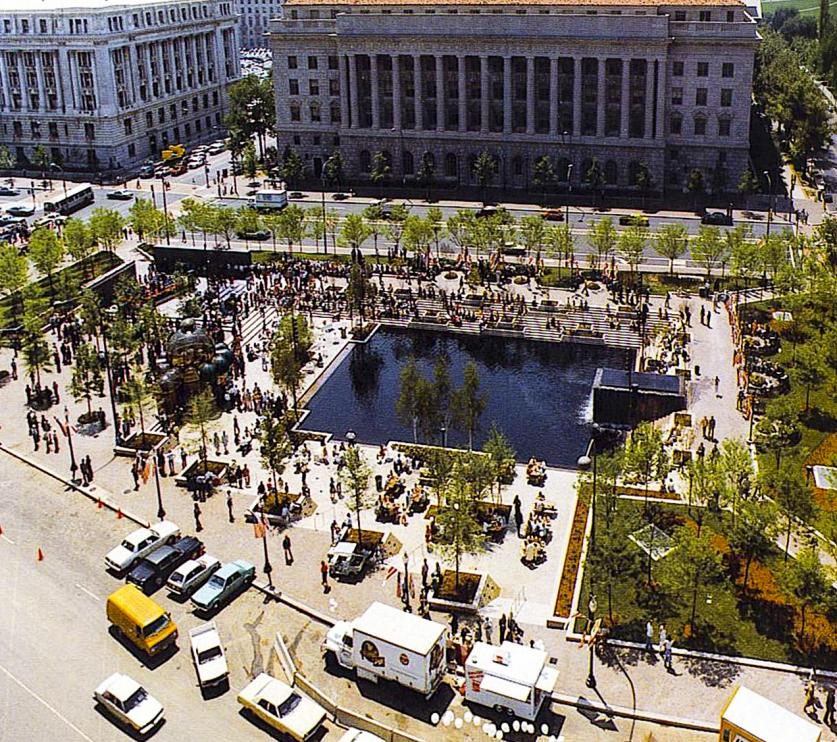 At a September 21, 2016 meeting, members of the consulting design firm AECOM provided an overview of the latest iteration of architect Joseph Weishaar’s winning proposal, The Weight of Sacrifice. The presentation was made before members of the National Capital Planning Commission, Commission of Fine Arts, National Park Service, General Services Administration, the D.C. Preservation League, the National Trust for Historic Preservation, and other consulting parties (of which TCLF is one) in what’s known as a “Section 106 review.”  This refers to  “Section 106 of the National Historic Preservation Act [which] requires Federal agencies to take into account the effects of their undertakings on historic properties ... The goal of consultation is to identify historic properties potentially affected by the undertaking, assess its effects and seek ways to avoid, minimize or mitigate any adverse effects on historic properties.”

This was the third time the consulting parties to the Section 106 review had met, but the first since Pershing Park was officially determined National Register eligible (though as previously reported, the likelihood that the park would be found eligible had long been assumed).

AECOM’s presentation did little to highlight the degree to which the park would be adversely affected (which was the purpose of the meeting), nor did it include required design alternatives illustrating concepts that could “avoid, minimize or mitigate any adverse effects.”  Instead, representatives said the one revised design that was presented “rehabilitates Pershing Park to serve as a national World War I Memorial” and “integrates new commemorative elements while maintaining character defining features of existing park,” claims that were met with skepticism. 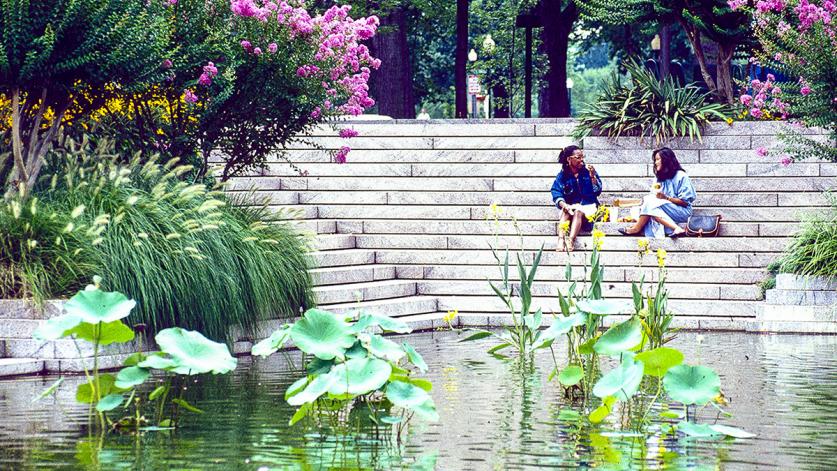 Lost, for example, would be the waterfall and the 7500-square-foot pool, which would be replaced largely by lawn and a small water feature described as a “scrim.”  TCLF’s Charles Birnbaum called the signature, Friedberg-designed fountain a “center of energy” and suggested that removing it would have the same impact as removing the fountain at Bethesda Terrace in New York’s Central Park. 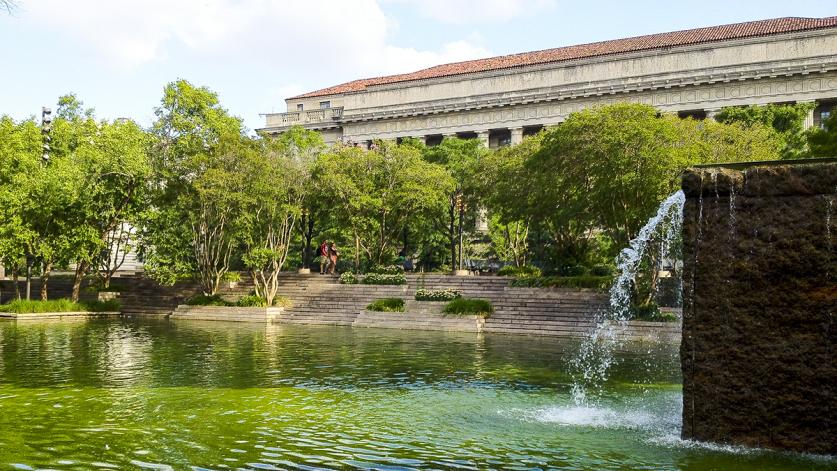 Through the course of the meeting, AECOM officials continued to suggest the impact of the new design on Pershing Park would be benign (they also claimed the pool and fountain had been inoperable since 2006, despite the photograph above, taken in 2012).  On page 48 of their 50 page presentation, in a section titled "Identification of Potential Effects," the impact on Pershing Park reads: "The World War I Memorial could affect physical park elements, but would maintain the conceptual elements and the overall spatial orientation of the modernist layout." The lack of specificity led D.C. State Historic Preservation Officer David Maloney and others to call for greater transparency in the design process.  He implored AECOM and the WWI Memorial Commission to “please itemize all of the adverse affects” the proposed design would have on Pershing Park, and “be honest about what is and isn’t being done.”   Maloney summed up by asking: “At what point do you obliterate a National Register eligible park and is that a fair trade off?”

In the coming months, the WWI Memorial Commission will meet with members of the Commission of Fine Arts, the National Capital Planning Commission, and others from whom they will need approvals.  We will continue to provide updates.