My name is Maura Rockcastle, principal and co-founder of TEN x TEN.

I have known Julie since I was nine years old. I knew her as my dad’s FUN work colleague during their shared tenure at the University of Minnesota’s School of Design in the early 90’s. When I was a teenager, I wanted to go to art school. I did not identify comfortably as an artist then and was unsure of that direction, so my dad introduced me to Julie, this incredibly cool and hip woman who had gone to art school at Carnegie Mellon and was teaching in the landscape department at the U.

At that time, Julie offered me a way of seeing art school as a critical foundation for many other things – a way of thinking, of investigating critical curiosity – and I have never looked back.

I remember wandering through Julie’s empty apartment the day she left Minneapolis for UVA, the moving truck full and I recall my Dad’s sense of loss – at losing a design colleague who he believed in, trusted and admired. A couple years later Julie wrote me a letter of recommendation to the BFA program at Carnegie Mellon’s and while I chose not to move to Pittsburgh then, little did I know that our paths would cross in that same City in the future, marking our first of several professional collaborations. I saw Julie on and off during graduate school and we stayed in touch as my early career in NYC wove in and out of hers.

Julie never held back from telling me what she thought about my choices during that time in NYC – she was honest and straight forward and I have always been thankful for her perspective even if I might have gone in the opposite direction.

So much of Julie’s power comes from her spirit – she emits this raw, vulnerable, accessible, honest and creative light that sees and honors the world for what it is. She is feisty and authentic in a discipline thick with white male dominated leadership – in my early career she represented hope and an alternative… she allowed me to dream of a different future for myself with more courage than I had ever been offered by any other mentor, teacher, or boss.

When I met Ross in Minneapolis and learned of his relationship with Julie, I have to admit – it relieved me and helped us build trust.

Over the last six years as a collaborator, she has helped me build confidence – she told me that I have something to say that is worth listening to and to speak louder – to keep reaching…. and to trust myself. That has been incredibly impactful for me – to have someone whom you admire so deeply offer that is so rare and so invaluable.

She has supported me on team phone calls, in front of clients, in front of colleagues, on juries, and lifted me up in moments when I was not so sure about my place in this field. Her strength and fearlessness, her opinions delivered with forthright clarity and humor, her depth of knowledge and steadfast commitment to visionary design that is regenerative and heals – is a kind of compass for so many of us.

As a remarkable design leader, her work teaches us to honor the stories in the materials, the plants, the authenticity of a place and the people who live there –to peel back the BS and build it like a mother !#%*&@.

Her work embodies why our role as landscape architects matters – the importance of regenerative design strategies, of deep research, of not scraping sites clean, of design as a series of layered processes in relationship with one another, of revealing site histories and telling stories that have the potential to both heal scared and toxic sites as well as re-connect people to these working landscapes in profound ways – Her work and approach remain urgent and critical for our profession – now more than ever. I could not be more excited to congratulate Julie on this incredible honor – and to share how much her work, her mentorship and her spirit has meant to me over the last 30 years.

My name is Ross Altheimer, I am the principle and cofounder of TEN x TEN.

I have had the great fortune of knowing Julie for 20 years. I met her while a graduate architecture student at the University of Virginia. Julie is the reason why I became a landscape architect. She was my professor, is a longtime mentor, a committed and honest friend. I have been blessed with many amazing teachers, but she by far has had the biggest impact on me personally and professionally as anyone I have encountered in my career. I think my story could be repeated by the 100’s of students that have had the great fortune of knowing Julie.

Julie has been there for every significant step of my path to and through landscape architecture.

My decision to become a landscape architect in grad school was the result of me walking by one of her studios my first year as an architecture student. I remember seeing her down the hall the first time with her bleach blond hair, hearing her speak with passion and honesty, and seeing the students thoughtful work and engaging in dynamic an elevated dialogue, with swear words. I was blown away by her commitment and presence and how badass she was. I was also super intimidated. I had no idea what landscape architecture was at that time, but if she was doing it, I had to do it.

After enrolling in the program I had the chance to work with her closely and get a more intimate connection to her through reviews, design studio, taking design, planting and technology classes with her. She modelled for us how to think about a critical practice both in the design studio and in her own practice DIRT. She took us to DC with our Watts branch studio in Marvin Gaye’s [neighborhood] and worked with community leaders. In Marvin Gaye’s neighborhood, [she] modelled how to consider all the layers of landscape, art and community in combination with justice, truth, culture and storytelling. It was the first time I was assigned a song as a part of studio prep, “What’s Going On.” We also wrote a song with her for her studio “Watts Branch, Is A Very Pretty Stream.” I hope you get a chance to hear her sing that.

My decision to move to Minneapolis had a lot to do with her connection to Minneapolis. It is where she had her first teaching gig and she still had deep connections to practice, both arch[itecture] and land[scape] which she extended her network for me. Inspired by her time at the American Academy in Rome, I also pursued the Rome Prize. This is when she moved her practice to New York. She wrote me a letter, put me up in her loft for both the interview and Rome Prize ceremony, was the loudest person in the room when they announced my name, bought me dinner. 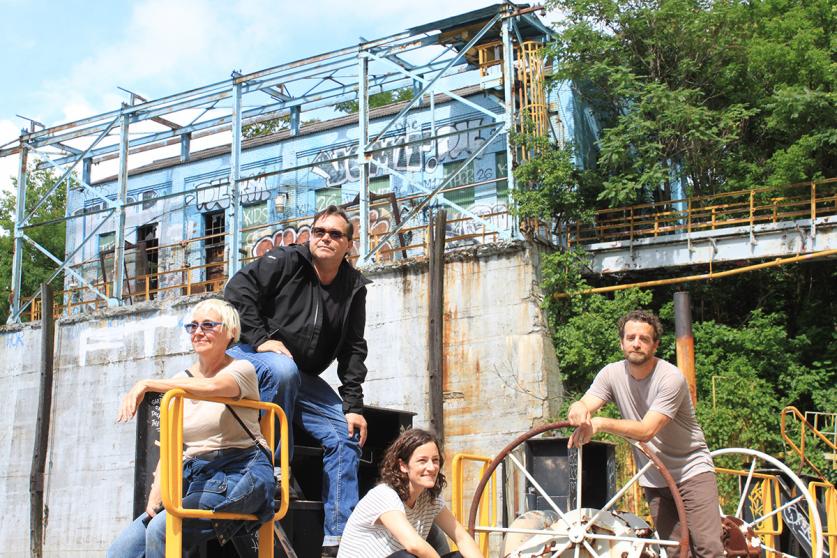 In starting TEN x TEN, Maura and I got to talking about some of our she-roes and realized we both shared a connection to Julie. DIRT studio set the bar for the work we wanted to do in our practice. We had the great fortune of collaborating with Julie on the project that launched the practice, Mill 19. It was a competition with MSR and DIRT in Pittsburgh on one of the last remaining steel mills in Pittsburgh.  We shared lots of time together on site, she helped us write a proper scope of work, we collaborated on design ideas and got to see another side of her as a dynamic, engaging and truth telling collaborator. She produced these amazing hand drawings that challenged the way we were thinking and synthesizing the site. And it was the first time I had heard the word “butch” used to describe the character of what the landscape should be. She continues to be a longtime collaborator

She models courage, leadership, fearlessness in all aspects of her life. You could write an alternate landscape essay with Zumthor’s title on her work, “The Hardcore of Beauty.”

Congratulations JB, you are still the most badass landscape architect I know.