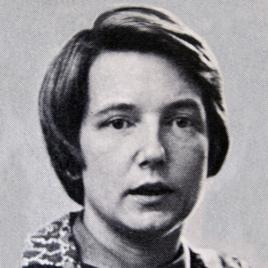 Raised in San Diego, California, McGuire earned a B.S. (in 1954) and an M.S. (in 1956) in landscape architecture from the University of California, Berkeley. After building her career as a landscape architect, she became the principal at the New England-based consulting firm McGuire & Watson, Landscape Architects and Site Planners. In 1965 McGuire arrived at the Radcliffe Institute in Boston as a Radcliffe College Bunting Fellow to study landscape from an historical perspective. While there, she taught a course for the Radcliffe Seminars Program entitled “The Intellectual History of Garden Art.” Due to its success, a landscape-design certificate program was built around it, and in 1968 McGuire became the first director of the Radcliffe Seminars Program in Landscape Design (now The Landscape Institute at the Boston Architectural College), a position she held for five years. In the 1970s McGuire supervised landscape modifications, including the expansion of the campus and road realignments, at Wellesley College in Massachusetts.

In 1957 McGuire published an article entitled “Early Site Planning on the West Coast: Frederick Law Olmsted’s Plan for Stanford University” in Landscape Architecture Magazine. She edited Beatrix Farrand's Plant Book for Dumbarton Oaks (1980), Beatrix Jones Farrand, 1872-1959: Fifty Years of American Landscape Architecture (1982), and American Garden Design: An Anthology of Ideas that Shaped Our Landscape (1994), which contains essays by Thomas Jefferson, Andrew Jackson Downing, Frederick Law Olmsted, Sr., and Beatrix Farrand. She co-authored Beatrix Farrand’s American Landscapes: Her Gardens and Campuses (1985) and authored Gardens of America: Three Centuries of Design (1989). McGuire served as an advisor to the Gardens at Dumbarton Oaks and also served on the board of the Beatrix Farrand Society. She died after suffering an accute illness at the age of 85. 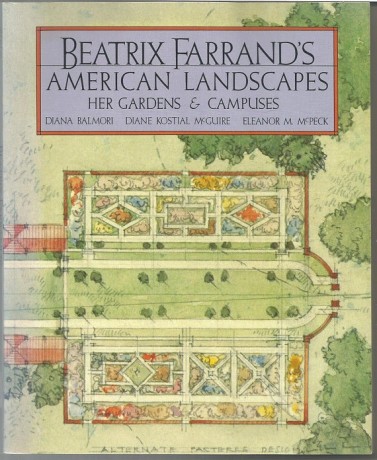 Diane Kostial McGuire was born in San Pedro, California, on March 3, 1933.  Her mother was a teacher and her father a career naval officer.  When she was five  or six yerars of age, her family moved to an island in Puget Sound, where her father was in charge of communications for the Northern Pacific Theater.  Because she was home-schooled, McGuire was free to explore and to observe the natural interactions of plants, wildlife, and climate – an immersion in the natural world that established the strong foundation for her career.  After a brief period in Bremerton, her father was appointed to teach at Princeton University, with its landscape designed by Beatrix Farrand. Farrand would later become a mentor and subject of several of McGuire’s books and essays. The family’s next move was to the North Shore of Long Island where McGuire was first exposed to great estates of the Country Place era and their garden settings, as well as the gardeners who maintained them.

It was in San Diego, during her high school years, that McGuire became aware of the barriers in women’s education. Although she had a keen interest in books and their production, she was excluded from the print shop and was required to take sewing instead. When she applied for a job at the zoological gardens, she learned that girls were not allowed to feed the animals. Frustrated by these rules, she pursued her interest in tennis, soon becoming a national champion. Her world expanded from the public courts of Balboa Park to the glamorous life of Southern California country clubs. 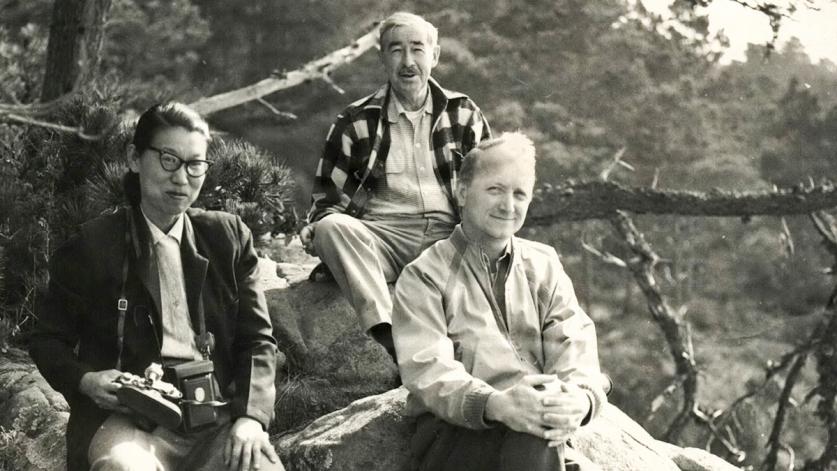 McGuire entered the University of California, Berkeley’s, landscape architecture program in 1950 as the only woman in a class of thirteen, alongside fellow classmates Michael Painter, FASLA; Tito Patri; John Vogley, ASLA; Peter Walker, FASLA; George Walters; and Joe Yamada, FASLA. Garrett Eckbo, Lawrence Halprin, Robert Royston, Geraldine Knight Scott, and Thomas Church all taught during McGuire’s student years.  Mai K. Arbegast, who would become a lifelong friend, came to Berkeley to teach horticulture in 1952. Although projects by women were noticeably absent from the curriculum, McGuire’s advisor and department chair H. Leland Vaughan “recognized that women were every bit as capable of accomplishment in landscape architecture as men” (Diane Kostial McGuire, The Farrand Gift, page 1).  McGuire graduated in 1954 with a B.S. in landscape architecture.

Having found that the landscape program placed little emphasis on history and historic preservation, McGuire continued her studies the following year by taking courses in art, decorative arts, architecture, history of architecture, and literature, finding inspiration in the fresh approach of modernism, both in architecture and in the poetry of T. S. Eliot. In 1955 Beatrix Farrand’s Reef Point library (some 2,700 volumes on the art of landscape architecture) arrived at U.C. Berkeley, which McGuire would later note was a significant contribution to the future of the Department of Landscape Architecture.

McGuire received her M.S. in landscape architecture and city planning in 1956, having written the thesis “Frederick Law Olmsted’s Early Work in California.” During graduate school and subsequent summers, McGuire worked for Osmundson & Staley Landscape Architects on projects such as the Kaiser Center Roof Garden in Oakland, California. She also worked for one year in the San Francisco office of Leo Daly and Associates Architects, Planners as the landscape architect for their city-planning division. After moving to Boston in 1962, McGuire took a position with Sasaki, Walker and Associates, contributing to several projects, including the St. Louis Zoo. 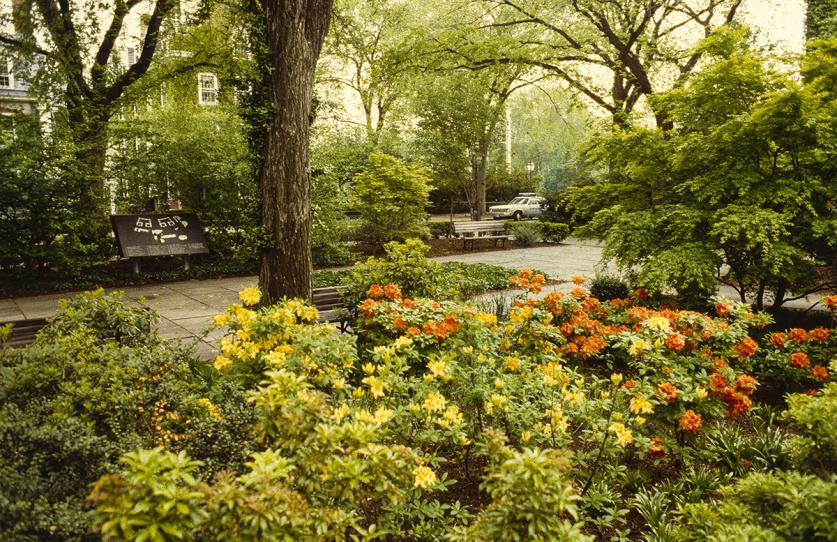 McGuire received a fellowship in 1962 to investigate the graphic representation of gardens in history at the Radcliffe Institute for Independent Study, founded by Mary I. Bunting, president of Radcliffe College in Cambridge, Massachusetts.  In 1963 McGuire was invited to teach a seminar, “An Intellectual History of Garden Art,” which was so well received that President Bunting asked her to build a program around it. In 1966 McGuire founded and became the first director of the Radcliffe Seminars Program in Landscape Design (now The Landscape Institute at Boston Architectural College), which encouraged women to become career-oriented professionals. McGuire continued to teach there through 1980. 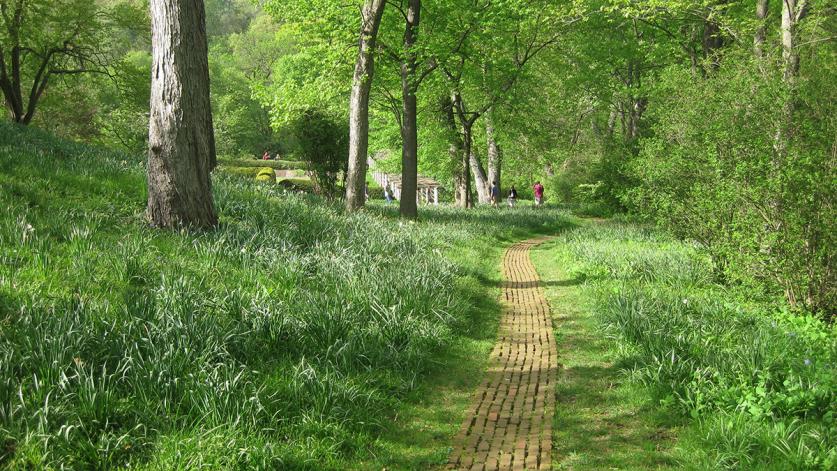 By this time, McGuire had authored several articles for Landscape Architecture Magazine, which continued to raise her profile.  She was appointed the landscape architect for Radcliffe College from 1965 to 1981 and served as landscape architect for Wellesley College and Harvard University from 1973 to 1979. McGuire hired Barbara Watson to work in the Harvard Landscape Office in 1975. Their firm, McGuire & Watson, Landscape Architects and Site Planners, was also established that year.

With her vast knowledge of Beatrix Farrand, landscape history, plants, and campus maintenance, McGuire progressed from the Harvard campus to the position of advisor to the Gardens at Dumbarton Oaks in Washington, D.C., from 1975 to 1981. During this time she prepared a landscape preservation plan for the property to ensure that Farrand’s design intent for the garden informed all decision-making and undertook a painstaking restoration of the Orangery.

During the early 1980s, McGuire divided her time between Cambridge, Washington, D.C., and Fayetteville, Arkansas, where she was program director and professor of landscape architecture at the University of Arkansas from 1981 to 1984. Fellow professor Lake Douglas said of McGuire, “She was on the vanguard of women professors and a role model because of her interest in landscape history and the application of it in practice.” 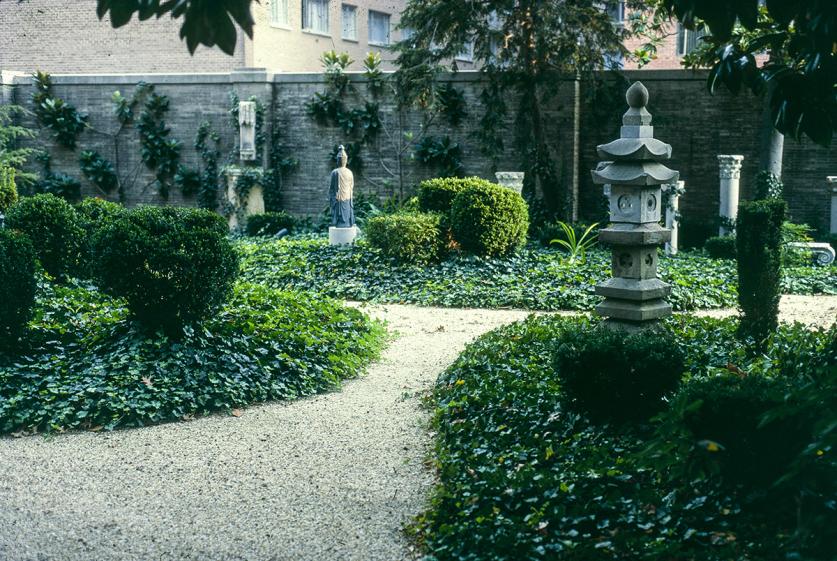 McGuire received a Dumbarton Oaks Project Fellowship (1985-1988) to prepare a grant report titled “The Naturalistic Garden at Dumbarton Oaks.” In 1987 she returned to the Radcliffe Seminars Landscape Design and Landscape History Program as an instructor.  McGuire was also an early board member of the Beatrix Farrand Society, which was founded in 2003 at Garland Farm, Farrand’s last home in Maine.

McGuire took a clear approach to design in which simplicity was essential. Through campus design she strived to improve students’ lives. As an educator she encouraged women to enter the landscape profession and emphasized the importance of landscape history and the arts. Joining the profession in the 1950s, at a time when few women were active in the field, she, like her mentor Beatrix Farrand, was a role model for future women landscape architects. In 2012 she received an Honorary Doctorate in Landscape Architecture from Boston Architectural College. McGuire died after suffering an accute illness at the age of 85.

McGuire, Diane Kostial.   American Garden Design – The Ideas Which Shaped Our Landscape. New York: Macmillan, 1994. An anthology that traces the history of American horticultural style in essays by such gardeners as Jefferson, Olmsted and Thaxter. 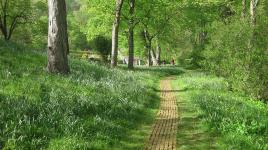 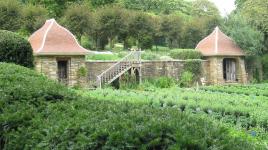 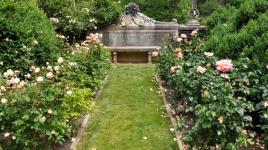 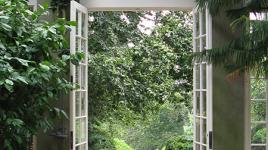 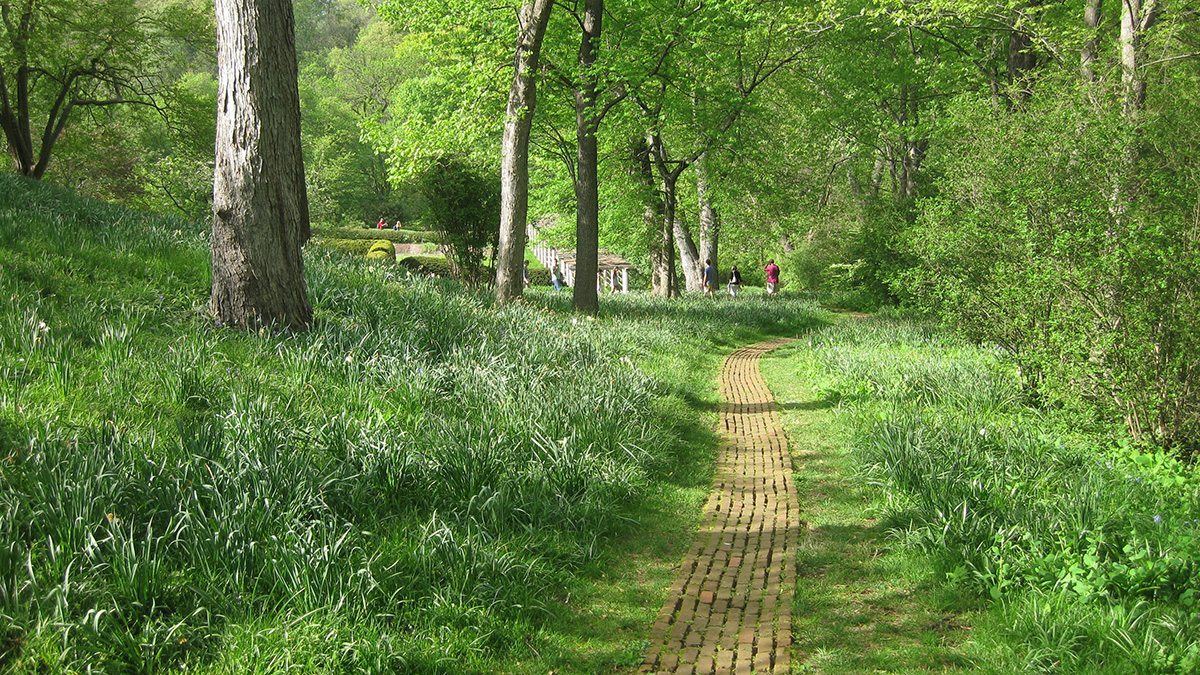 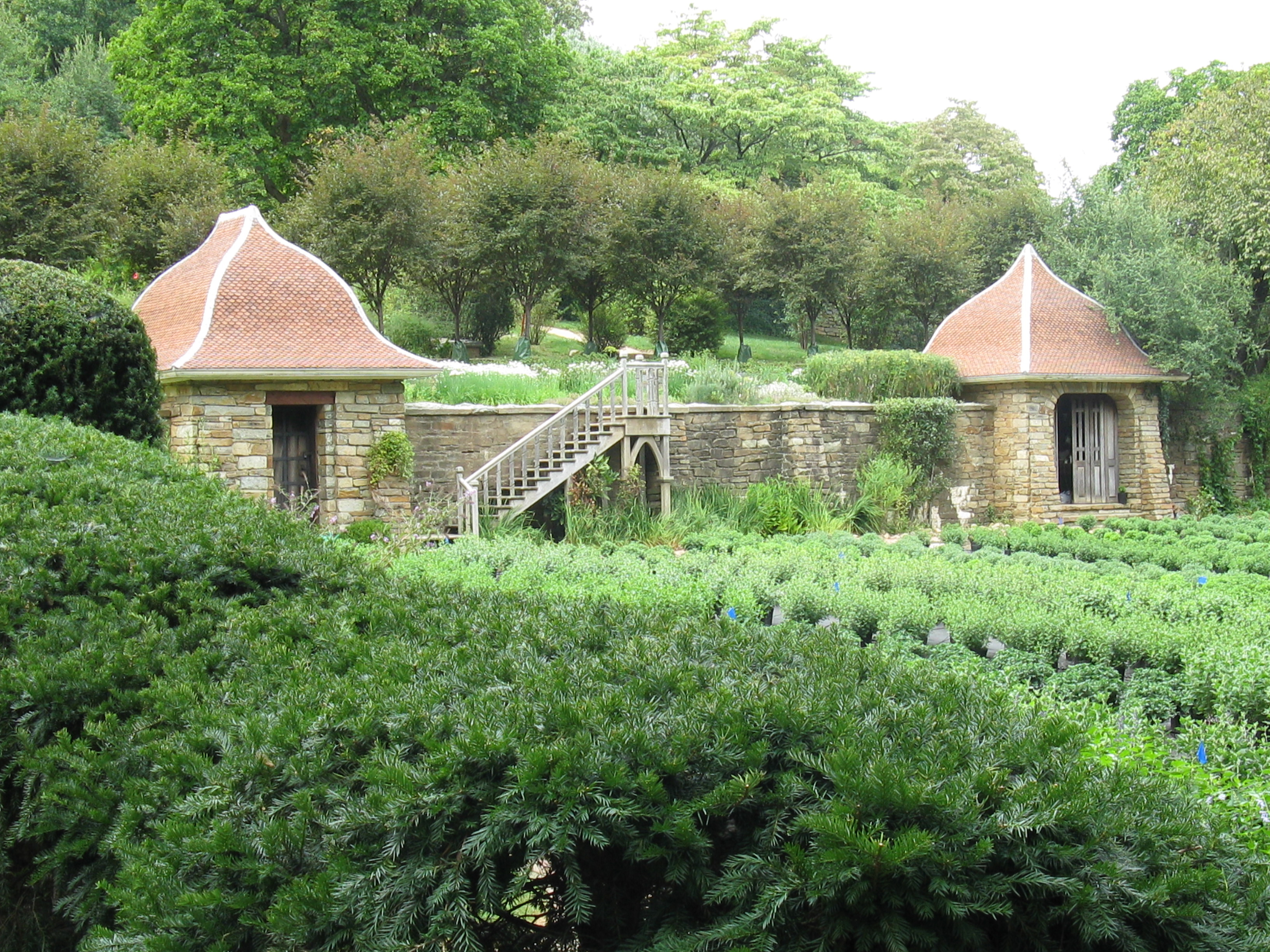 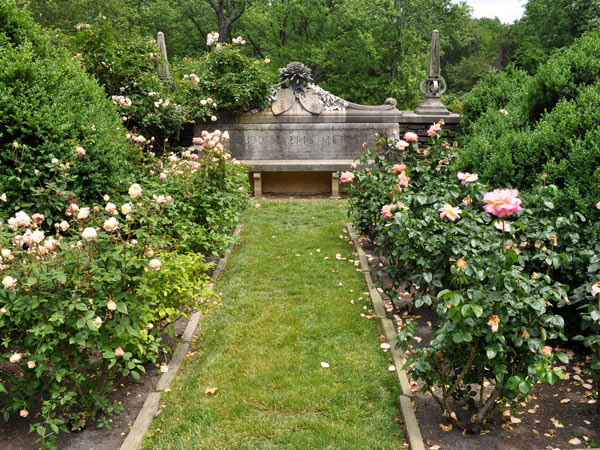 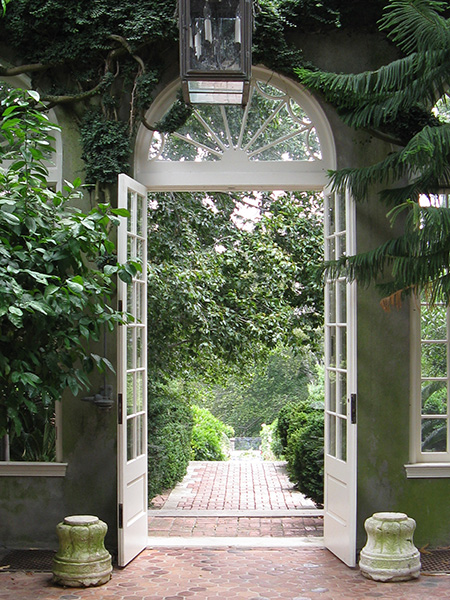 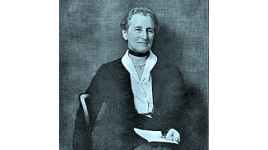 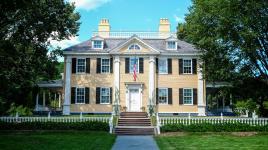