Located not far from Boston is a residential property whose significance to the history of American landscape architecture may be little known to most who pass it daily. The McGinley Garden was created by Ellen Shipman at the zenith of her distinguished career, and, until recently, the secluded property has been a Mecca for garden enthusiasts. But its new owners have something very different in mind for the future of the site: a new complex of 120 housing units and 180 parking spaces. 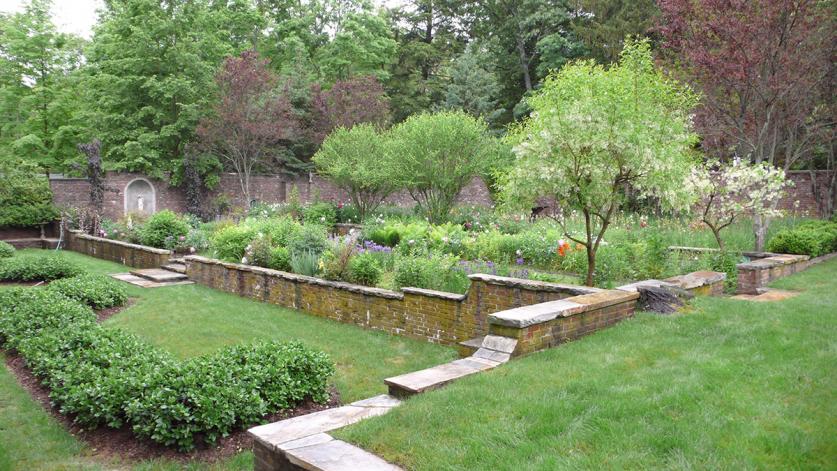 In 1925 Mrs. Holden McGinley, a newspaper heiress, commissioned groundbreaking landscape architect Ellen Shipman to create a garden for her estate just outside Boston. A Colonial Revival mansion designed by the well-known Boston architecture firm of Bigelow & Wadsworth anchored the gently sloping site. Shipman’s design sought to take advantage of the views of open meadows and the Blue Hills Reservation to the south and west of the mansion. To do so, she created a walled garden ensemble that well represents her general approach to design: enclosed, axial spaces enlivened by exuberant plants and strong architectural features.

Separated from the mansion by a lawn, the garden was entered through one of three gates, which open onto three discrete rectangular compartments—an upper, middle, and lower garden—that descend in elevation from northwest to southeast. Conceived as three long terraces, each of the smaller gardens was designed as a distinct space. The upper garden featured a rill edged in bluestone and set within a flat, narrow lawn, whose perimeter was planted with beds of peony, chrysanthemum, and iris. The rill in particular is reminiscent of the work of Edwin Lutyens and Gertrude Jekyll, from which Shipman drew inspiration. 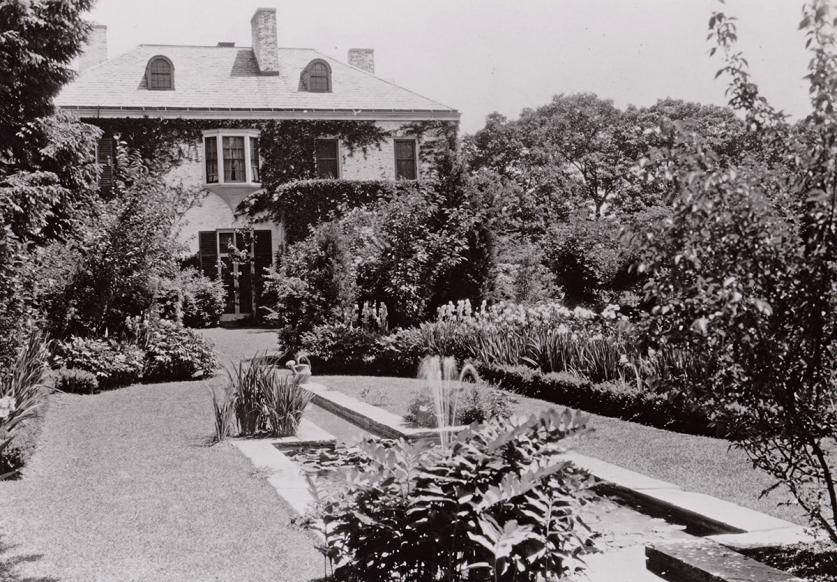 The middle garden comprised an equally narrow greensward flanked by perennial borders and low walls, whose posts were adorned with climbing roses. Hedges of Carolina hemlock separated this central space from those on either side of it. A niche for sculpture, placed within the western perimeter wall, punctuated the visual axis that runs through the space and extends east, to the door of the house’s sunroom. To add color and texture, Shipman planted tulips, peach trees, and pansies alongside pearlbush and flowering almonds.

The lower garden was home to a wide variety of roses. Its main feature, however, was a round pool with a lotus-leaf fountain at its center, set within a cluster of golden salmon polyanthas. The pool ensemble was placed on the perpendicular axis that unified the three gardens, extending southeast through a break in the wall to provide views of the landscape in the distance—the ‘garden beyond the garden.’ Adjacent to the house, Shipman created a spring border, placing double-flowering peach trees interspersed with pearlbush along the walls, and a canopy of flowering almonds overhead. 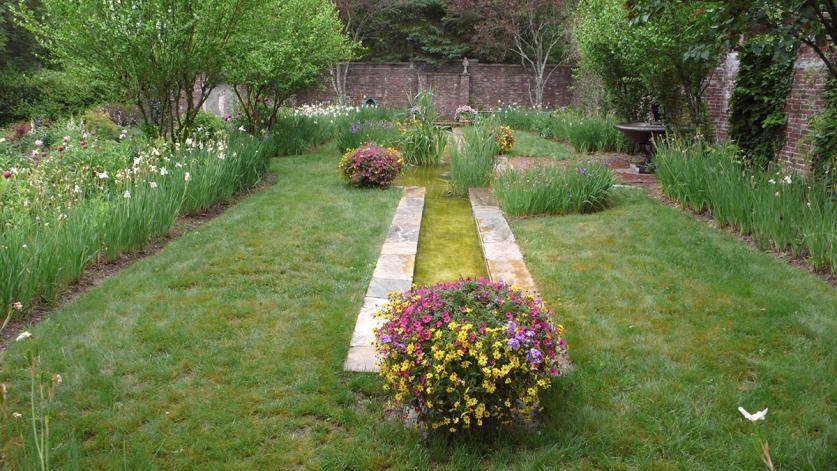 Although subsequent development has obscured the spectacular views once enjoyed from its precincts, the McGinley Garden remains one of Shipman’s most important commissions from the 1920s, when she was at the peak of her career. The Massachusetts Horticultural Society awarded the garden a blue ribbon in 1933 for its “great charm and restraint.” Notably, the project also touches on the career of Edith Schryver, who worked in Shipman’s office in the 1920s and produced drawings for the garden. Schryver would go on to partner with Elizabeth Lord in the firm Lord & Schryver, thus forming what was among the first West Coast landscape architecture practices run by women. Given its strong connection to these pioneering designers, the McGinley Garden’s pedigree is particularly rich and significant for the history of landscape architecture. Indeed, scholar Judith B. Tankard, an authority on Shipman’s work and the author of Ellen Shipman and the American Garden (U. of Georgia Press, 2018), has noted the precarious nature of Shipman’s legacy:

…relatively few examples of Shipman’s work can be seen today. One reason is that her gardens, which were unusually plant-intensive and therefore fragile, had already begun to disappear before she died in 1950. Another aspect is that her practice was devoted almost exclusively to private gardens, and only a handful of these have been converted to public use.

The McGinley Garden’s former owners kept it in good condition, making repairs to its walls and planting less maintenance-intensive shrubs, trees, and perennials within Shipman’s architectural framework, which remains intact. And in recent years, the historic Shipman landscape has been occasionally opened to the public, drawing hundreds of visitors from around the world. But in September 2019, the property was sold for $3,000,000, without a hint of what the buyers had in store. 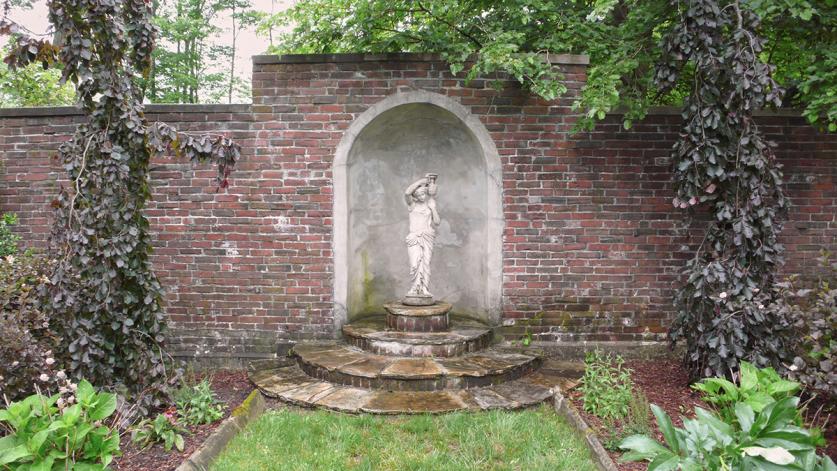 In February 2020, Comprehensive Land Holdings, LLC, which now owns the property, submitted an Application for Site Eligibility to the Massachusetts Housing Finance Agency (MassHousing), seeking approval to develop the four-acre site. According to the application, “the proposed development will replace a gilded-era mansion and outbuildings with 120 multifamily units, of which 25% will be affordable to 80% AMI, and 180 parking spaces.” As the development plans clearly indicate, a new four-story complex containing the housing units would be built atop a parking garage, completely obliterating the home by Bigelow & Wadsworth and the garden by Ellen Shipman. 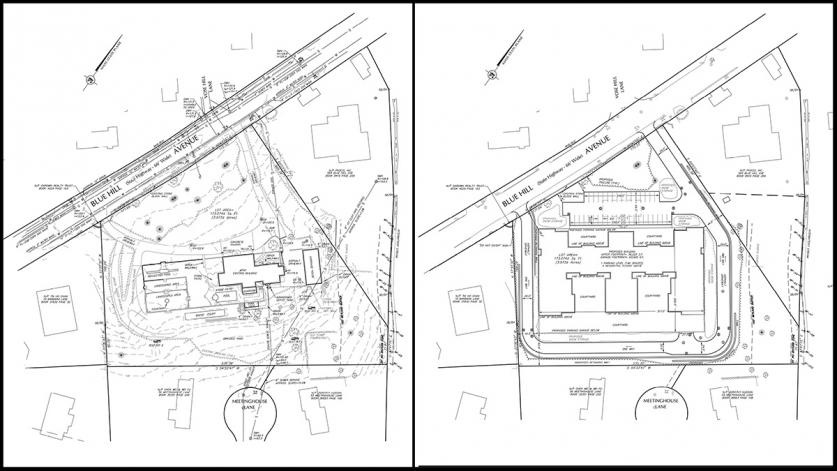 MassHousing has purview over the project because the developer is seeking to build affordable housing units under Chapter 40B, a state statute that applies to such developments. MassHousing could deny the permit, or it could place special conditions on the development. The Town of Milton is also currently considering the application and has until April 15, 2020, to file an official response.

To help save this rare work by a true pioneer in the field of landscape architecture, members of the public can express their concerns in writing to the following individuals:

Note the following at the beginning of your correspondence: 582 Blue Hill Avenue; Chapter 40B Application—MH ID no. 1071 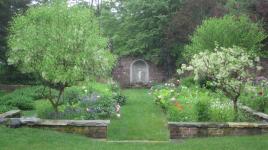 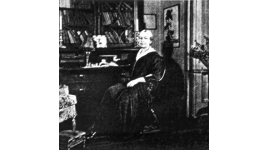 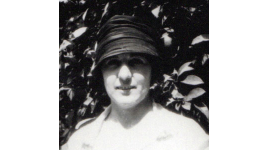 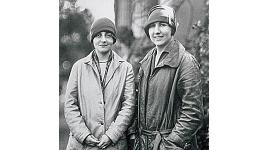 A Red-Letter Year for Women, but Not for Their Art
Landslide 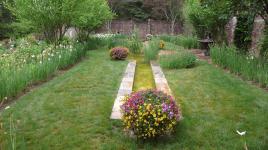