Sicily in All its Glory

Sicily in All its Glory

Sicily’s riches – food, art, gardens, archaeological sites, history, and more – were in abundance during TCLF’s long-planned, nearly two weeklong (and COVID-interrupted) fourth international excursion. ProTravel exquisitely curated an enticing sampling that included visits to private villa compounds, expert guides at world renown sites, superb botanical gardens, a massive nursery with the millennia-old trees, and memorable meals featuring regional specialties. The tour group featured some familiar faces from past trips, but many more people who had not previously traveled with TCLF, which resulted in new friendships, entertaining shared meals, and a wide variety of lived experiences that added to the enjoyment of the sojourn. 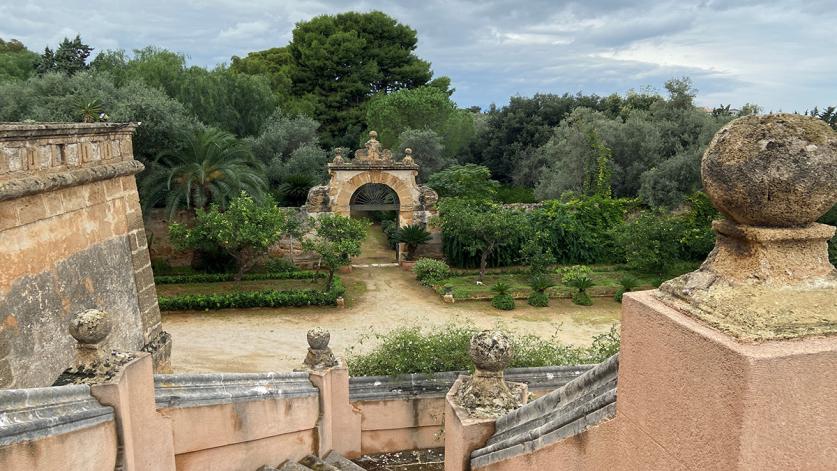 The journey began in Palermo, Italy’s fifth largest city, on a regal note with a welcome dinner at stately, art-filled Palazzo Raffadali, originally built in the 15th century, hosted by Princess Stefania Raffadali. The first full day commenced with Palazzo Reale, which is emblematic of Sicily’s heavily layered history as noted in the Blue Guide: “It was built by the Saracens, enlarged by the Normans, and later restored by the Spaniards.” Indeed, invasions, conquest and more invasions have shaped the island since the arrival of the ancient Greeks and it was in evidence throughout the entire trip. The Palazzo’s showstopper, the Cappella Palatina, is encrusted with elaborate and vibrantly colored 12th century mosaics depicting scenes from the Old and New Testaments. The day also included a stroll through the intimate and romantic garden at the 12th century church of San Giovanni degli Eremiti and a visit to the town of Monreale overlooking the Conca d’Oro, Palermo’s valley, and its famous Duomo and magnificent Benedictine Cloisters. 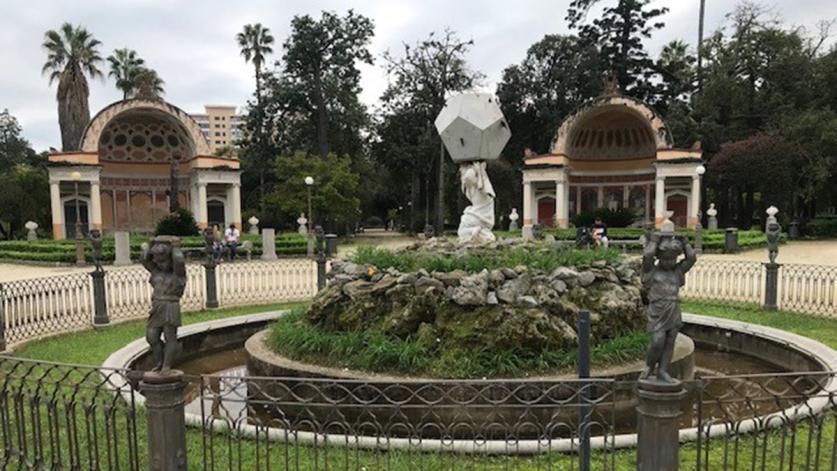 The Palermo Botanical Garden and neighboring Villa Giulia, Palermo’s first public park and one of the earliest public open spaces in Europe, captivated the group as did an opulent lunch hosted by Duke and Duchess Gioacchino Lanza Tomasi at Palazzo Lanza Tomasi, the last home of Giuseppe Tomasi di Lampedusa, author of the world-famous novel The Leopard. Exquisite Bagheria, the preferred location for the summer residences of the aristocracy, included two enchanting private gardens (one of which featured an elaborate cactus display) and a stop at Villa Palagonia with its unusual, mirrored ballroom. 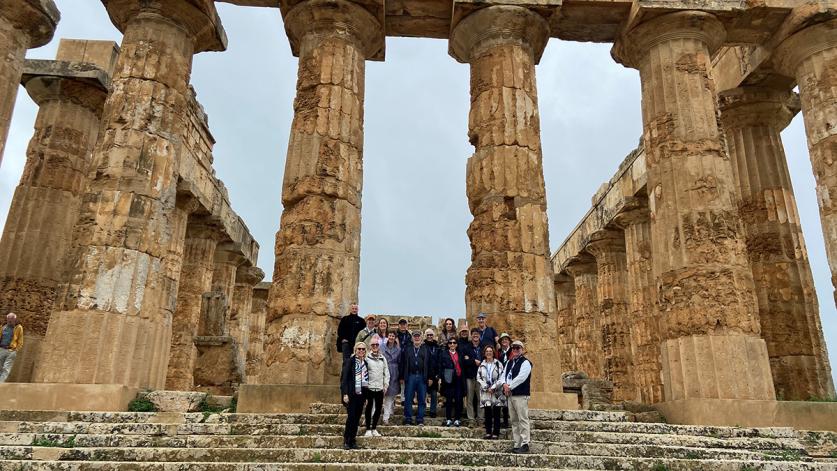 Tour group at the Selinunte archaeological park, Italy - Photo by Charles A. Birnbaum, 2021

Monumental and impressive buildings from antiquity were the highlight of the Selinunte archaeological site and a short stay in Agrigento (where everyone’s hotel room featured a jaw dropping view of the ancient Greek temples). And the intricate and elaborate mosaic covered floors at Villa Imperiale next to Piazza Armerina featured mythical figures, battles scenes and bathing beauties. 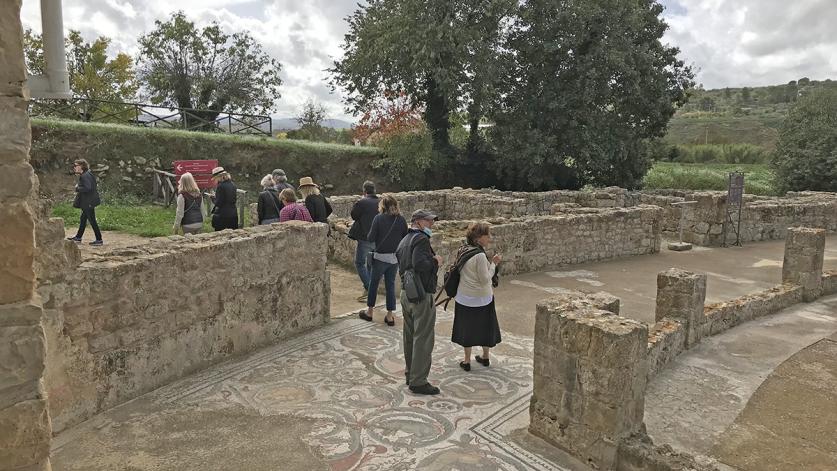 In Lentini the group toured the gardens at Giardino Borghese with Virginia Borghese, Princess Borghese’s daughter-in-law, followed by Giardino San Giuliano in Villasmundo. More awe-inspiring antiquities were on view in Siracusa including its massive Greek theater, Orecchio di Dionisio, or the Ear of Dionysios, a limestone cave carved out of the Temenite Hill, and Latomie del Paradiso, a large ancient stone quarry. The day also included time on the isle of Ortigia, the historic center of Siracusa; the interior of the Duomo incorporates ancient columns from the temple once on the site of the church. 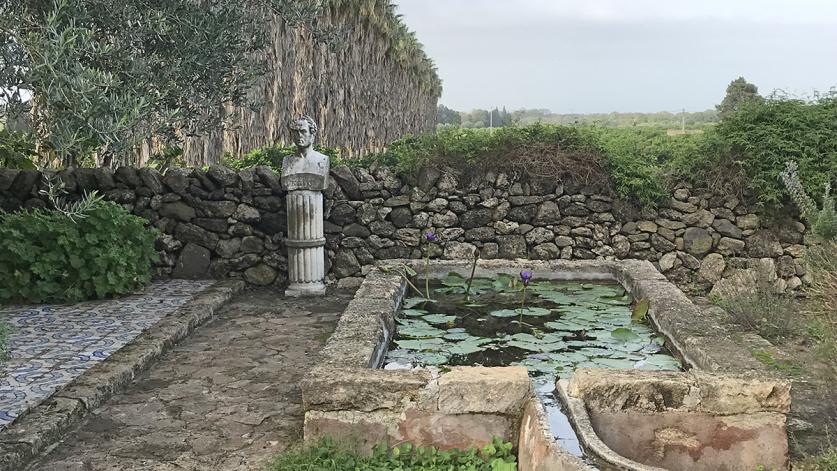 One of the tour’s highlights was the private garden of the entertaining Lady Valeria, founder of the Catania Garden Club, which is rich with olive and orange trees. From there the group went to the nursery Piante Faro, one of the biggest in Europe with 400 hectares of imposing garden-ready trees and plants, and then Radicepura Gardens, a botanical park that hosts an influential biennial festival. 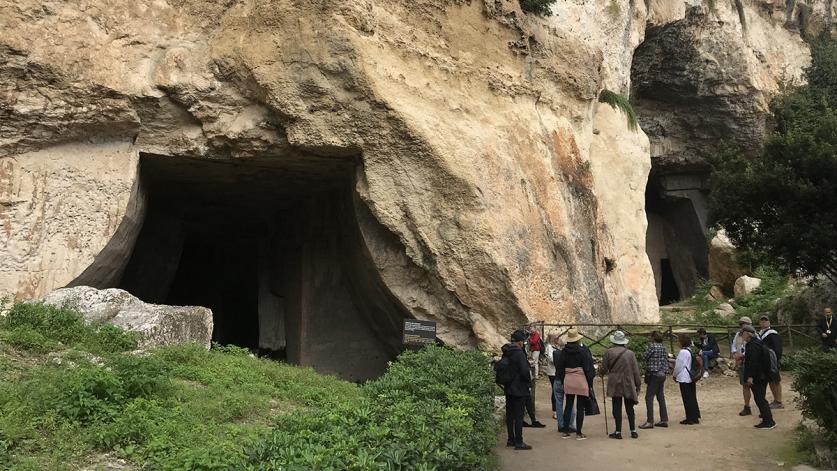 Another unforgettable time was spent on a visit to the Crateri Silvestri of Mount Etna, a group of now inactive volcanic cones on the mountain’s south-east side created by the eruption of 1892. From there, a jaunt to the small village of Valverde for a visit to Giulia’s garden which is owned by Lady Giulia, the secretary of Etna Garden Club of Catania. 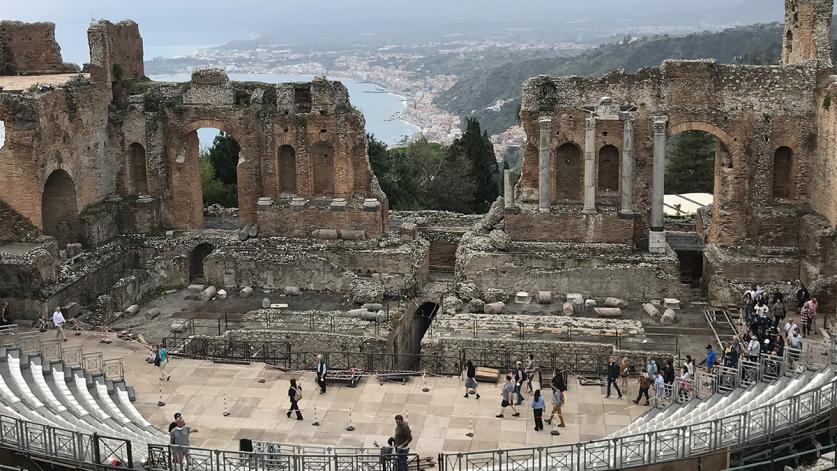 The tour concluded in Taormina, a hilltop town north of Catania, reached by a narrow winding road with views of the Bay of Naxos. Homebase was the Villa Schuler, a Sicilian mansion converted into a hotel in 1905 and one of oldest owner run hotels in Sicily. The 4th century B.C. Greek open theater, the second largest ancient theater in Sicily and subject of many a wistful painting, is excavated into a hillside and features breathtaking views the bay and Mount Etna. A festive dinner at the Villa for all of the attendees capped the excursion.

All of the guides provided excellent context and background and our bus driver Claudio expertly navigated the often challenging (and narrow) streets. Raucous, romantic, and reverential – Sicily consistently delighted and frequently amazed. 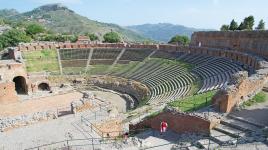