The enthusiasm for What’s Out There Weekend New Orleans was evident from participant feedback: “I’ve been relentlessly exploring New Orleans for 45 years, but during the remarkable tours offered over the wonderfully organized weekend I discovered exciting new places,” said Jack Davis, Trustee Emeritus of the National Trust for Historic Preservation. In fact, most of the attendees were local residents interested in learning more about their city – and more than half had never been to one of the tour sites they visited.  “I look forward to your eventual return here and thank you from the bottom of my heart for a weekend chock full of memories and inspiration,” wrote another tour participant.  Nearly all of the respondents rated the tours as “excellent.”

The twenty-five tour sites spanned the origins of the city along the banks of the Mississippi River and the Vieux Carré to the American Sector to trade and settlement along Bayou St. John to the social experiment of Pontchartrain Park to the Lafitte Greenway and Crescent Park, two linear park projects of the 21st century. Land development and design were linked with various nationalities in the city, customs, and prevailing social conditions and progress. Guides wove together stories of maintenance efforts, political struggles, and neighborhood life with the sites’ cultural, social, and design histories. 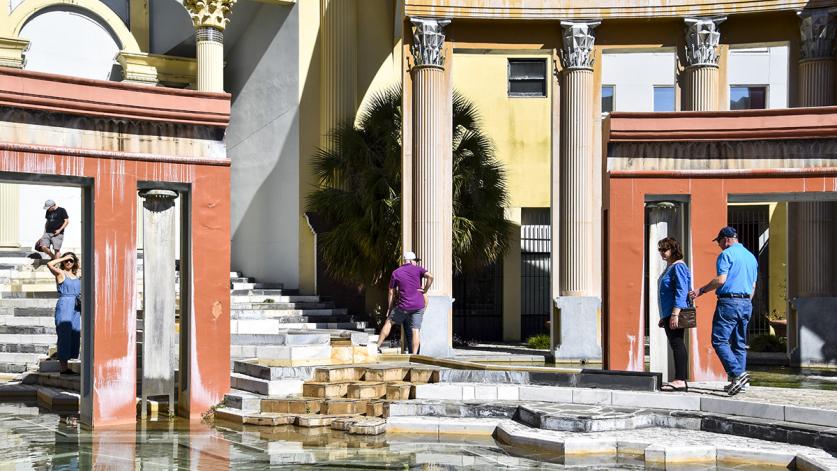 Participants learned about how leaders of the Italian-American community sought to commemorate the Italian immigrant experience in New Orleans, which resulted in Piazza d’Italia, an icon of post-modernism that opened in 1978. Architect Charles Moore collaborated with the Perez firm in a design that incorporated familiar Italian elements: colonnades, a clock tower, a campanile, a Roman temple, and, in homage to the Trevi Fountain, an extensive water feature. Full realization of the intended surroundings was never accomplished, though a restoration project is currently underway and the potential development of adjacent vacant lots is promising.

Tour guide Jeff Thomas described his childhood in Pontchartrain Park, a subdivision created to afford African-Americans the opportunity of home ownership. Borders were defined and enforced, however, by the “ditch” where tussles occurred routinely when park residents crossed into the white neighborhood. Joe Bartholomew, who was not allowed to play at golf courses he designed due to segregation laws, built the golf course at Pontchartrain Park, which opened for African-Americans in 1956.

Philanthropists Edith and Edgar Stern, creators of Longue Vue House and Gardens, were involved in financing Pontchartrain Park. The Weekend provided two tours of the gardens at Longue Vue, which were designed by Ellen Biddle Shipman and augmented by Caroline Dormon and William Platt. Participants also viewed the newly-restored Whim House and a fortunate few descended into the reactivated wine cellar combination dining space in the house.

The revealing narrative of the Audubon Park tour can be summed up by Davis, “To walk my own neighborhood park with geographer Rich Campanella revealed things I hadn’t seen in my previous 2,000 visits.” 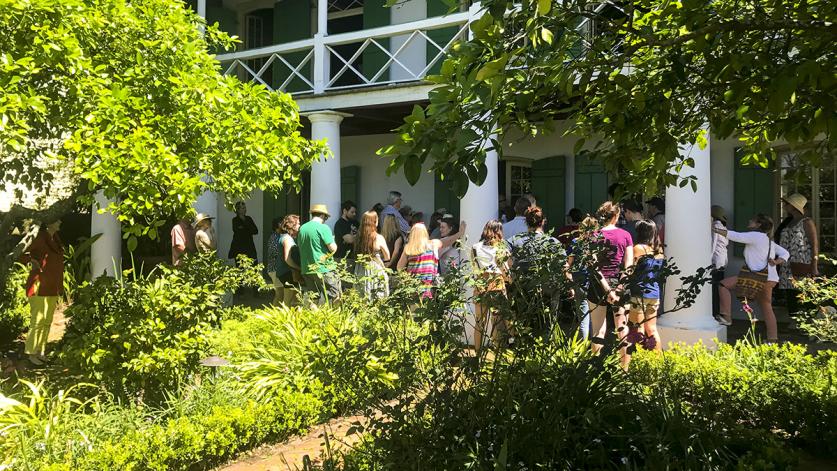 The City Park tour layered stories of the Allard Plantation land that was donated to the city by philanthropist John McDonough in 1854 with later design improvements representing Beaux Arts city planning ideals. The WPA era brought roads, lagoons, bridges, and sculptural additions. On a beautiful Saturday morning, the Besthoff Sculpture Garden teemed with exuberant children and their Easter baskets on the hunt.

Proceeding along Bayou St. John, participants could see the natural waterway’s importance to the early economic development of the city. The Pitot House commentary included the post-Katrina garden design that organized planting into zones representing different periods (i.e., native plants; those from the 19th century; a kitchen garden and those showing Louisiana’s agricultural history; and a meadow to hold events). Realities of the efforts of Pitot owner Louisiana Landmarks Society in balancing its education and advocacy work within the home’s mission and programming were touched upon. Family lineage came to life with stories from tour participant Marion Bright, whose husband is the grandson of Berthe Marie Pitot. 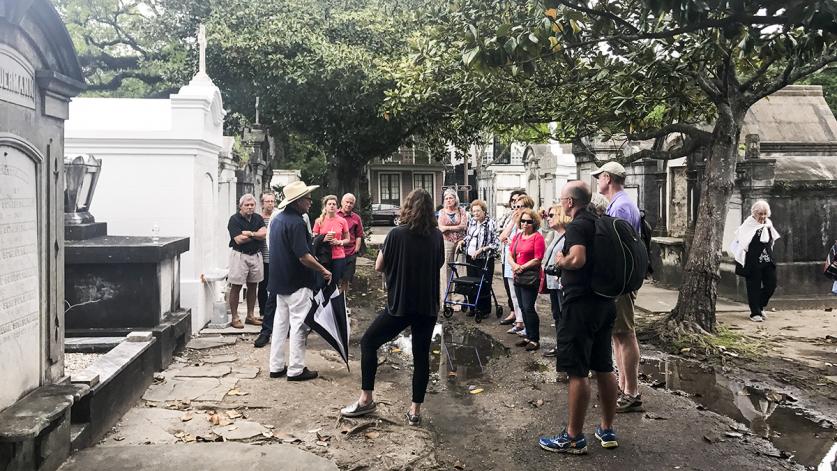 Victories and tests of neighborhood revitalization were conveyed vividly in the tour of Coliseum Square. Maintenance efforts of historical elements such as the fountain and the statuary display the keen stewardship ethic of residents. Years of advocacy resulted in the removal of the Camp Street up ramp in 1994, which restored the prominence of Margaret Place Park.

The story of the wool-clad Ursuline nuns arriving in New Orleans from France in August 1727 was detailed in the Old Ursuline Convent tour, brilliantly led by the historian and archivist for the Archdiocese of New Orleans. At other Vieux Carré landmarks, the gracious staffs at Beauregard-Keyes House and Hermann-Grima and Gallier Historic Houses led informative garden tours, including a special house tour at Beauregard-Keyes. 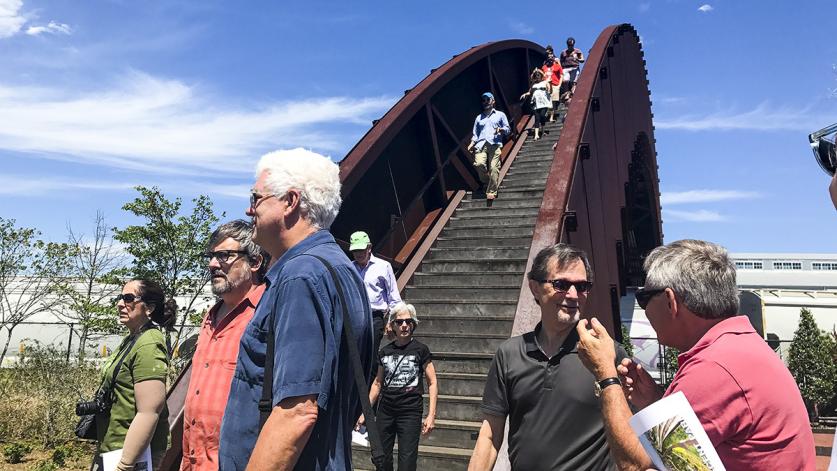 LSU landscape architecture professor Max Conrad’s tour of the New Orleans Old Quarter/Riverfront was as a huge success. Conrad started with a lecture on the history of the waterfront from the 31st-story offices of Eskew+Dumez+Ripple overlooking the sites he was describing. It was standing-room only.

The Weekend represented the collaboration of numerous spokes of the historic wheel of New Orleans, in addition to the Parks & Parkways Department. TCLF is grateful to the cadre of guides - the extraordinarily accomplished garden managers, professors, architectural historians, landscape architects, neighborhood activists, and architects - who engaged participants with rich stories and intriguing details.  Lastly, the Weekend would not have been possible without local partnering organizations - the Louisiana Chapter of the American Society of Landscape Architects, the Preservation Resource Center, and NOLA Parks For All - who did so much to showcase the city’s unique culture and landscape heritage. 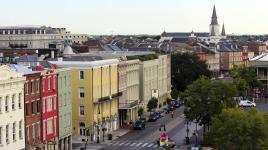