Editor's Note
TCLF’s February 2007 e-newsletter included a Landslide feature written by Landmark West about the Central Park Conservancy’s plans to restore an area on the east side of the Park. Regrettably, the article contained inaccurate information about the Conservancy’s proposal and the history of the site. As you will read in the feature that follows, Landmark West’s assertion that the proposed work would eradicate historic park fabric is unsupported by the facts. TCLF has removed this article from the website and is pleased to give the Conservancy the opportunity to set the record straight.

At the February 6 public hearing of the NYC Landmarks Preservation Commission, the Central Park Conservancy presented plans to restore the landscape from 97th Street to 106th Street on the east side of Central Park. This landscape is one of the last major areas of the Park to be restored since the Conservancy was founded in 1980. The scope of the work is consistent with our ongoing landscape restoration throughout the Park. It includes reconstruction of storm drainage, irrigation, and lighting infrastructure; reconstruction of pedestrian paths; restoration of existing stairs; and horticultural work consisting primarily of reestablishing turf in eroded areas and augmenting existing perimeter plantings.

Subsequently, an account of our project written by Hunter Armstrong of the local advocacy group Landmark West! appeared on the “Landslide: Landscapes at Risk” section of The Cultural Landscape Foundation’s website. The article reiterated testimony delivered by Landmark West! at the LPC hearing.It included false and misleading statements about the scope our restoration proposal and was riddled with inaccurate and unsubstantiated claims about the history of this part of the Park, compounded by glaring mischaracterizations of Olmsted and Vaux’s design intent.

Landmark West!’s contentionthat the restoration proposed by the Conservancy poses a threat to physical evidence of “three beautifully intact, contiguous layers” of landscape design associated with Calvert Vaux, Samuel Parsons, and Gilmore Clarke is entirely without merit. Their description of the project area as three distinct landscapes, representing the work of these three individuals, bears no relation whatsoever to the actual documented history of this part of the Park. The original circulation throughout the site was laid out during Vaux’s tenure prior to his death in 1895. While Parsons’s association with the Park began in 1881, only work completed in the years between 1895 and 1911 can be considered a distinct Parsons’s layer. 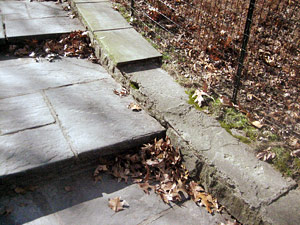 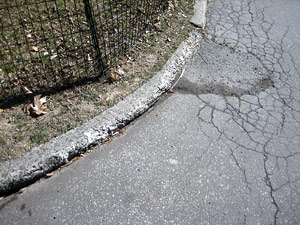 Landmark West!’s claim of a distinct Gilmore Clarke layer is based on their assertion that he designed the fort landscape. This landscape and original circulation were designed by Olmsted and Vaux in the 1860s. Additional paths were added to this landscape between 1942 and 1947. The record drawings confirm that Clarke was not involved in this work.

The suggestion by Landmark West! that we intend to reconfigure historic paths or remove historic stairs is unfounded. We have not proposed to realign or remove any path or stair that can be attributed to Olmsted, Vaux, Parsons, or Clarke. The only notable changes proposed to the existing layout are the removal of a redundant section of paths that was added in 1928 to serve a long-deteriorated and obsolete play surface, and the reconstruction of an original path that was truncated from the circulation system through deterioration. In all, these modifications to the existing path system involve less than 10% of the nearly two miles of path within the project area.

Landmark West!’s speciousclaim that our work would “eradicate historic park fabric” is focused on stairs, path edging, and concrete benches. In fact, our proposal is to restore all of the stairs using the existing materials. The path edging in question is an 80-foot stretch of “boulder edging” (actually small stone fragments, averaging 6 to 10 inches high), and concrete curbing. Photographic documentation confirms that the stone edge—which Landmark West! describes as original historic fabric characteristic of Vaux—did not exist in this location until some time after 1914. The earliest evidence of this treatment anywhere in the Park appears in photographs taken in the 1930s. The concrete curb and bench, which they inaccurately attribute to Clarke, are standard details employed since the 1930s, and still widely used today. In use throughout NYC Parks for decades, they cannot be associated with any particular era of design.

The disparate edge conditions evident throughout this part of the Park are remnants of earlier capital projects and maintenance interventions, indicative of a landscape that has not been restored. Landmark West!’s suggestion that these inconsistent edge conditions contribute to the variety of landscape experiences envisioned by Olmsted and Vaux and, furthermore, that the Park was conceived of as “intentionally discontinuous,” is simply indefensible. The Park’s creators varied the experience through the composition of the landscape—meadows, woodlands, lakes—not through an assortment of site furnishings and functional details. And the defining characteristic of the Park, as Olmsted and Vaux intended, is that these landscapes are interconnected, contributing to what they referred to as “a single work of art, to which the design of each of its parts shall be confluent and helpful.” Movement through the landscape was meant to be seamless. Accordingly, paths were detailed to be as inconspicuous as possible. They were, as Samuel Parsons described them, “the dumb conductors of the visitor and should serve in themselves to guide him easily towards every spot which could afford enjoyment.”

Landmark West!’s observation that “the curbing is historically appropriate and appears to be in generally excellent condition” is inaccurate on both counts, and their contention that “removing existing material is something that should only be done if necessary” focuses on the functional details, not the composition of the landscape. Our proposal is to restore a deteriorated landscape, and it involves rebuilding infrastructure and path systems, and comprehensive landscape work. The Conservancy has proposed to reconstruct paths in the project area using a complement of details that we have refined in the course of our 26 years of experience restoring and managing Central Park. Path edging is carefully detailed to direct storm water to the drainage system while being as sympathetic as possible to the landscape, and usually involves a single row of granite block set on a 45-degree angle to nestle the path into the landscape.

The Conservancy is concerned with preserving the designed layers of Central Park. Distinctive features from the twentieth century, including the Conservatory Garden and the system of marginal playgrounds, have been preserved through our work. Throughout our practice, we have steadily improved our approach to respect the significant layers within the context of the Park’s historic design. Our current proposal to reconstruct the existing stairs throughout the project site demonstrates a clear commitment to preserve the significant architectural details of both the nineteenth and twentieth centuries. It should also be noted that, as we clearly communicated to community boards, LPC, and every interested civic group, the restoration of Fort Clinton and Nutter’s Battery was specifically not included in our plans at this time in order to allow for a more detailed analysis of the layers of their development before a proposal for treatment is considered.

Landmark West!’s article mentioned several groups that echoed their testimony at the LPC hearing. Most of these groups testified without hearing our presentation of the proposal; however, their testimony was remarkably consistent. It has been our experience that consistency between testimony can be (and often is) orchestrated. There is a difference between consensus and credibility, and in that difference lies an opportunity for the review process to be manipulated by a few individuals.

One thing the Landmark West! piece neglected to mention is that each of the three neighboring community boards that reviewed the Conservancy’s restoration proposal endorsed it unanimously. Community boards are the City’s official mechanism for vetting and representing local public opinion. The community boards, unlike advocacy groups are accountable to a formal public process.

Landmark West! advocates a misguided approach to preservation that would retain as relics the scattered remnants of every capital project and maintenance intervention to accumulate in the course of Central Park’s uneven history, at the expense of honoring the essential, timeless vision of its creators. They have relied on unsubstantiated conjecture about the origin and significance of the details they advocate preserving. To borrow an expression from political satire, their position is based on “truthiness,” a word coined by comedian Steven Colbert, and defined by the American Dialect Society as “the quality of preferring concepts or facts one wishes to be true, rather than concepts or facts known to be true." Specious advocacy can be based on truthiness. Responsible stewardship cannot.

Public advocacy can add value to the work of design professionals and preservation practitioners. For years, the Conservancy has met with any advocacy group interested in our capital projects, including Landmark West!, because we have been of the mind that dialogue with any group that has an interest in our work is relevant and potentially constructive. As stewards of what is arguably the City’s most valued public space, we believe our extensive process of public outreach contributes in a meaningful way to our work and to our ability to balance the competing interests of contemporary use in the context of an historic landscape.

As practitioners, we are accountable to review commissions, regulatory requirements, professional and ethical standards, funding sources, and the public. Advocates, on the other hand, are accountable only to the particular point of view they represent, however narrow (and sometimes misguided) that might be. It is therefore incumbent on the preservation community to consider the source and hold advocates responsible for the information they promulgate