Plans are underway for the reconstruction of Fresno’s Fulton Mall – an early example of an outdoor pedestrian mall, significant for incorporating into its design one of the first displays of public modern art outside of a campus/institutional setting. This Modernist corridor, which showcases work by local and regional artists, was designed by landscape architect Garrett Eckbo and completed in 1964 as part of architect and urban planner Victor Gruen’s master plan for downtown Fresno. A 2013 Draft Environmental Impact Report (DEIR) with proposals that would threaten the integrity of the mall has raised concerns among members of The Cultural Landscape Foundation (TLCF), National Trust for Historic Preservation (NTHP), California Historical Society (CHS) and the California Preservation Foundation (CPF). 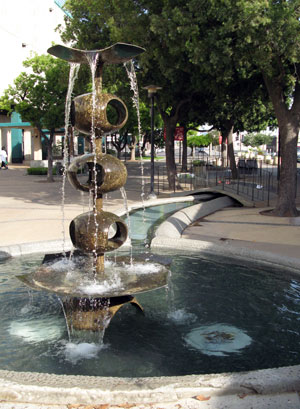 Fulton Mall, 2008, courtesy Tim DavisAs the city of Fresno has expanded outwards, it has seen the deterioration of its downtown core. This urban flight has led to high vacancy rates and the gradual disintegration of the public infrastructure. In August 2008, TCLF added Fulton Mall to its Landslide® list, in response to its diminished condition and ongoing discussion to open the pedestrian-only street to vehicles.

In 2010 the City of Fresno began a process to explore alternatives to invigorate the downtown spine, engaging experts and members of the public to create an option that was amenable to all parties as well as a transparent review process. The city assembled a team of consultants that met during a Fulton Corridor Specific Plan Community Advisory Committee Meeting (FCSPCAC) in September 2010. Discussion focused on the corridor’s six central blocks and adjacent cross streets. In a second meeting the public was presented with a series of design alternatives. Participants in this second meeting, a charrette called the Fulton Corridor Specific Plan Design Workshop, which was led by architect and urban designer Stefanos Polyzoides, included TCLF president Charles Birnbaum, preservationists and other consultants. Three separate tactics to address the mall’s deteriorated condition were examined: retain the corridor as pedestrian only; open the street up to vehicular traffic; or create a hybrid option, opening up some streets to vehicular traffic while maintaining the pedestrian core.  Commentary from the workshop resulted in the production of ten alternatives that were presented to the FCSPCAC for a vote. 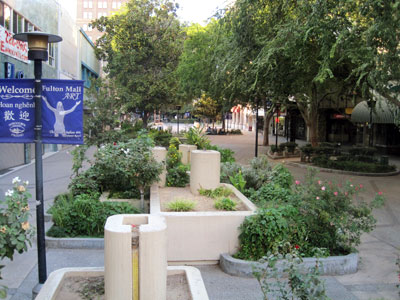 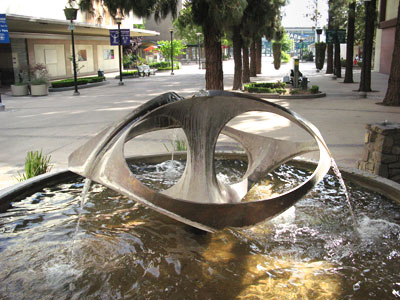 (upper) 2010; (lower) courtesy Tim Davis, 2008The 21-member FCSPCAC, composed of residents, property and business owners, and experts in a variety of related fields, selected three of the ten concepts for further exploration during the environmental review process, though none featured a hybrid approach: 1. Reopen the street and remove the existing mall 2. Reopen the street keeping selected elements of the mall design as “vignettes”. 3. Restore the mall in its entirety. TCLF believes that none of these options represents a viable alternative and are instead a direct result of the city’s concern that a hybrid alternative may disqualify the project from receiving a specific federal transportation grant. Additionally TCLF believes that moving forward with the specified options could threaten the site’s eligibility for National Register of Historic Places listing.

Birnbaum developed a whitepaper during the charrette process that argued for a hybrid alternative, stating: “As discussed during the charrette, the idea of opening some of the cross streets to vehicular traffic has great merit. For example, in Charlottesville, VA two of the cross streets along the eight block mall have successfully been opened in recent years…” He goes on to issue a warning about the delicacy of such an approach: “In general, by opening the Mall to moving/parked vehicles there is a diminished integrity of design. These changes to accommodate vehicles will need to be viewed on a case-by-case basis, ideally guided by a set of overarching design principles that balance use, design and historic preservation.”

In response to these concerns The Cultural Landscape Foundation, National Trust for Historic Preservation, California Historical Society and the California Preservation Foundation provided their comments on the DEIR to Elliott Balch, Downtown Revitalization Manager of the City of Fresno. The letter, dated January 13, 2014, emphasized the need to consider a hybrid alternative stating: “The Coalition would very much like to see the City of Fresno take positive steps to reinvigorate its historic downtown, and to sensitively redevelop the Fulton Mall as a part 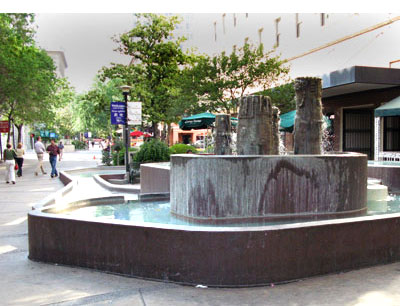 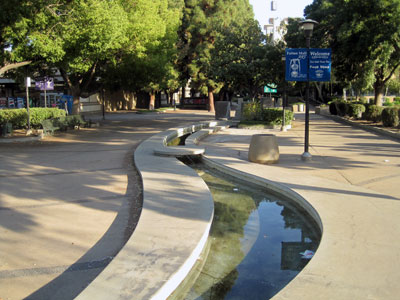 (upper) courtesy Tim Davis, 2008; (lower) 2010 of that process. We believe that the City has the clear authority to adopt a hybrid alternative that will not compromise the integrity of the Fulton Mall to a degree that it would be ineligible for the National Register. Further, because several alternatives were analyzed in the DEIR, but rejected, selection of such an alternative will not require re‐circulation of the DEIR.”

The commentary period for the DEIR has concluded. Comments can be submitted on the Draft Environmental Assessment and Section 4(f) Evaluation from January 10 to February 24, 2014. Interested parties can contact Kirsten Helton, Senior Environmental Planner, Environmental Division at [email protected], or: