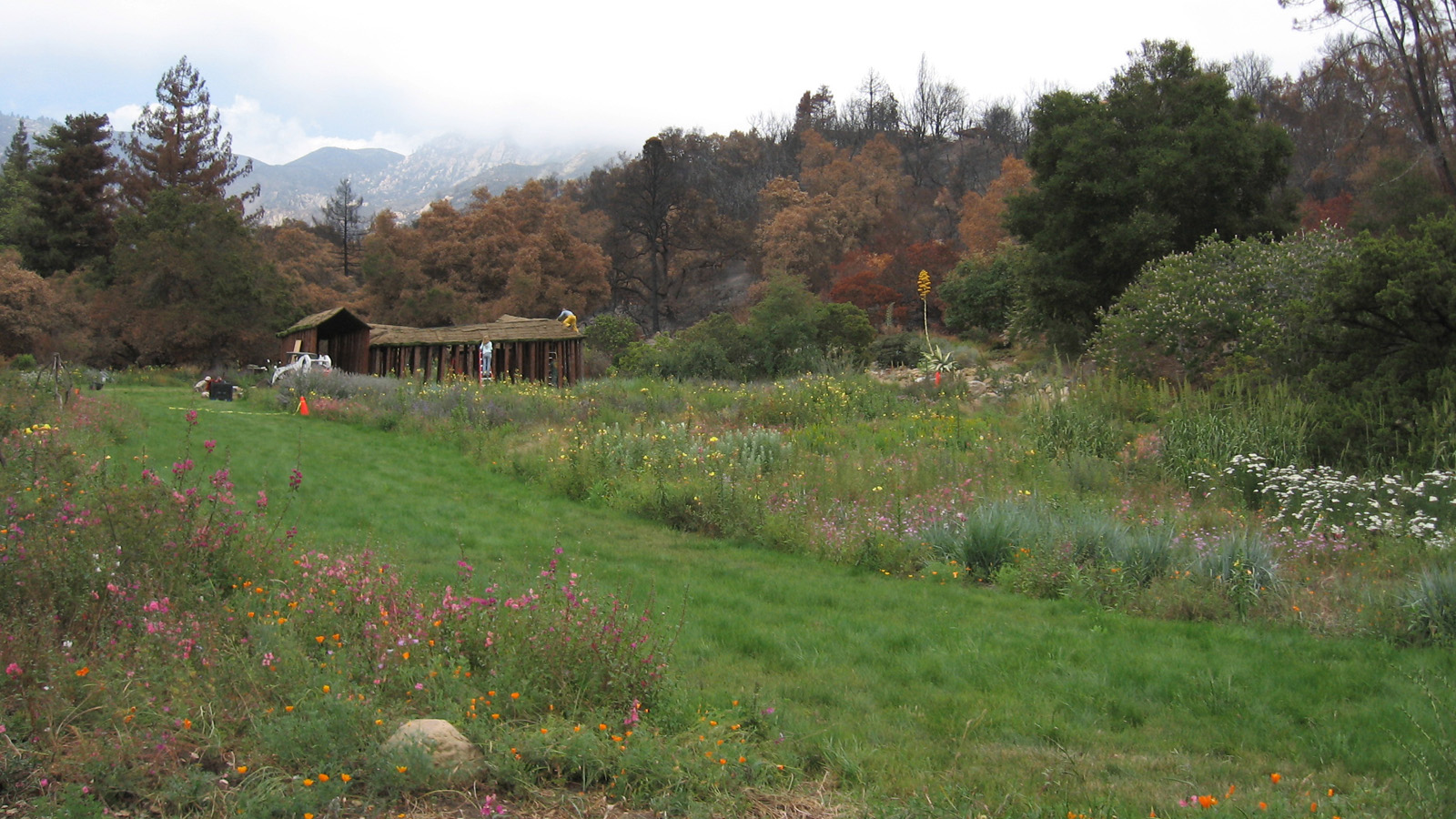 One of the first botanic gardens in America to be planted solely with native plants, the Santa Barbara Botanic Garden’s design and plant palette represent a unique collaboration between landscape architects Lockwood de Forest, Jr. and Beatrix Farrand. In addition to the site specific work at the garden, Lockwood and his wife Elizabeth de Forest popularized the ideas and experiments taking place at the garden in their publication, The Santa Barbara Gardener. Proposed alterations to the historic core of the garden now threaten to irreversibly destroy this design legacy.

Founded in 1926, the Santa Barbara Botanic Garden was the first botanic garden in California devoted to regional, native plants. The property includes the Santa Barbara Mission Dam and Aqueduct, constructed by Native American Chumash Indians during the Colonial period (the property was purchased, in part, to protect the Dam from development). First called the Blaksley Botanic Garden and laid out by Frederic Clements, Elmer Bissell, and Ervanna Bowen Bissell, the original goal was "to so unite the aesthetic, educational and scientific that this garden will hold a unique place in the horticultural world." Another aim was to showcase the beauty of California native plants and their suitability for use in private gardens and water conservation. 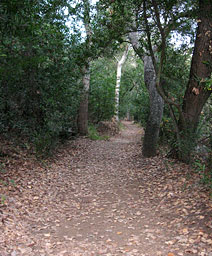 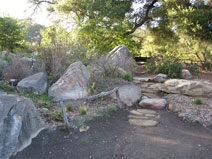 Landscape architect Lockwood de Forest, Jr. was involved from the earliest years (as a botanist, designer, and master planner), and, in 1938, landscape architect Beatrix Farrand joined the Garden Board. The two collaborated until de Forest's death in 1949, when Farrand became the master planner for the Garden. Their most visually stunning work is the entry sequence to the Blaksley Boulder and the oval Meadow, which is set against the dramatic background view of the mountains beyond. The uniqueness of the spatial experience leading from the coast live oak trees framing the Meadow on the west to the Mission Dam in the canyon below was noted in early guides to the Garden. The library building was designed by the noted architect, Lutah Maria Riggs, while its courtyard was a collaboration between Farrand and Riggs. After Farrand's tenure, de Forest's widow and partner, Elizabeth guided design development in the Garden during the tenure of several directors until her death in the 1980s. In addition to de Forest and Farrand, the garden's contributors include nationally-significant horticulturists and designers Kate Sessions, Lester Rowntree, Theodore Payne, Carl Purdy, and E.O. Orpet, among others. However, the historic core, the aesthetics, and scale remained essentially unaltered until recently.

The contributions of the de Forests and Farrand and the vision of their predecessors produced a design that was unprecedented for botanical gardens because: [a] regional, native plants were arranged in ecological communities (not as individual, exotic specimens); and, [b] the plants were subordinated to spatial and aesthetic experiences. The regional landscape was also embraced with local construction materials, naturalistic design, and by incorporating views of the greater natural landscape ("borrowed scenery"—a technique de Forest also used at his home in Mission Canyon.) In 1927, Lockwood and Elizabeth, (co-editors of The Santa Barbara Gardener magazine) wrote that the intent was to "develop the garden in such a manner as to increase the natural beauty of the setting." With its emphasis on drought-tolerant, sustainable native plants in ecological communities and the beauty of nature as the inspiration for design, the Santa Barbara Botanic Garden became the progenitor of a new type of public garden and a new approach in gardening for individual homeowners. Nowhere is this more evident than in the Meadow area—the Garden's historic core. 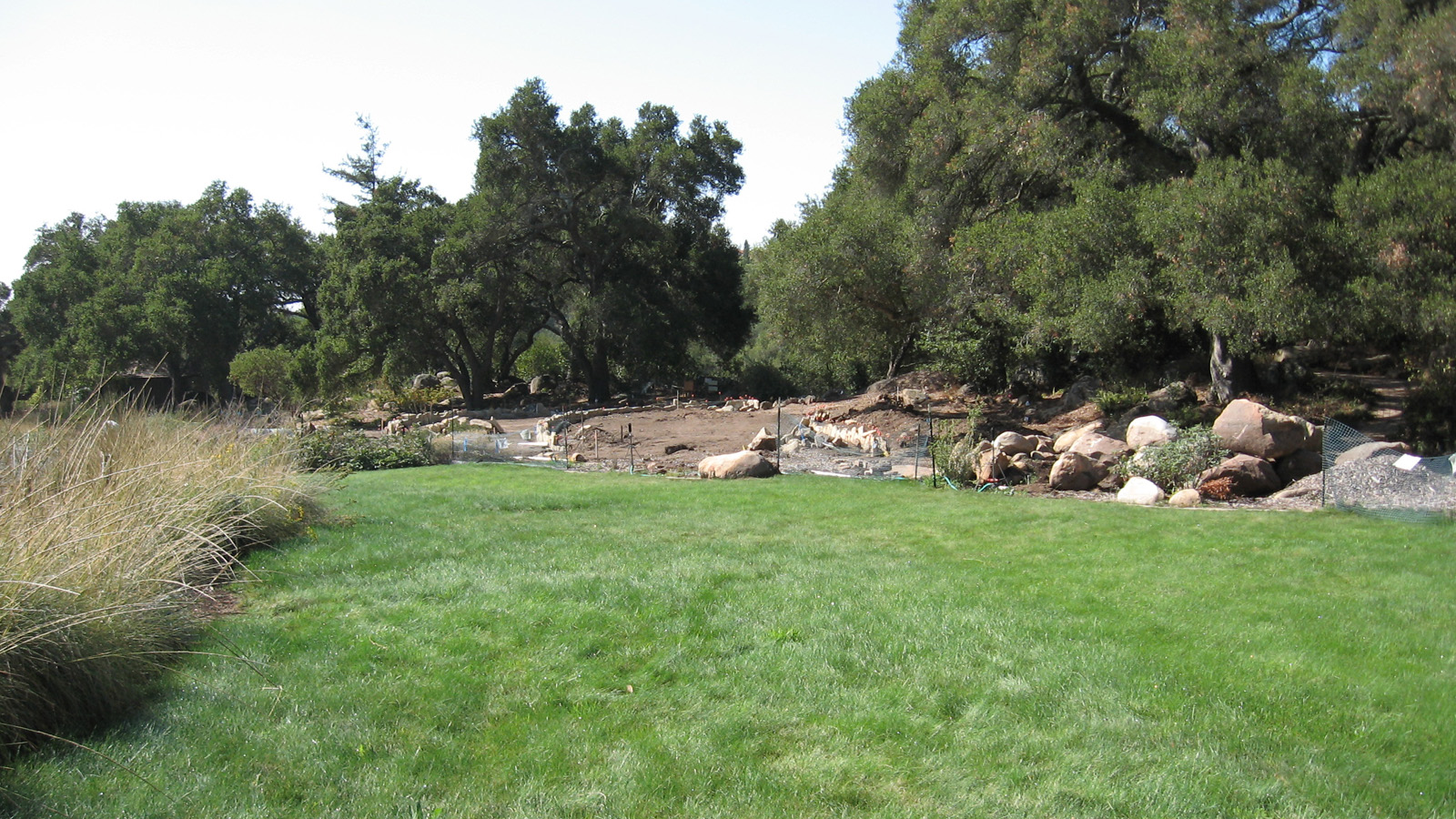 New lawn in the Meadow for special events and adjacent Meadow Terrace project under construction where an oak tree once stood.

In May 2009, 60 of the Garden’s 78 acres sustained damage in the Jesusita Fire, and the historic bridge, Gane House (acquired after the initial period) and woodshed, and most of the garden’s collection of pine and cypress trees were destroyed. The Botanic Garden did reopen for public visitation within several weeks of the fire, but with limited access. Fortunately because wildfire is a natural part of the California ecosystem, many of the plants in the garden are showing signs of recovery, and insurance will cover losses.

Even before the fire, major changes were underway at the Garden. A Japanese teahouse was installed south of the library in 1999, a new arrival sequence was built, many of the earthen trails were covered with concrete pavers, and an arbor was constructed adjacent to the library. Also a non-native, irrigated buffalo grass lawn was installed in the Meadow for special events and the path at the base of an ancient coast live oak tree that was part of the Meadow's frame on the west was paved—the tree later succumbed to root rot.

Instead of replacing the oak tree, one of the garden’s focal points, the administration began remodeling the space, now called "The Meadow Terrace," with the intent of constructing a 4,205 square-foot, three-tiered plaza (with retaining walls and additional paving extending into the canopies of the remaining trees and across the path into the Meadow). Construction was halted following public outrage but could resume. The buffalo grass has been replaced with a native grass lawn, however it is still an irrigated, mown greensward within the Meadow, which runs counter to its design and to de Forest's seminal question, "Do lawns belong in southern California?"

While improvements and growth are important to keeping the Garden a viable educational institution, the proposed plans for future development threaten to destroy its character-defining features, most notably the historic core. Though the Garden has acquired much new property in the last few decades, plans call for inserting new construction in the Manzanita Garden, which would “urbanize” the space. The Fire Management Plan (required for development in such high fire-risk areas) also impacts existing vegetation by removing it from around buildings and access roads. In particular, the Meadow should reflect the original, passive design intent allowing it to continue to reveal the surrounding natural beauty and mountain focal point.

The Garden is a Santa Barbara County Historic Landmark, but a listing in the National Register of Historic Places would bring tax benefits and greater awareness about this remarkable place. Supporters are encouraged to write to the Board of Trustees of the Santa Barbara Botanic Garden, asking the organization to honor its legacy in design, not just science, by recognizing and protecting its historic landscape. It is hoped that stewards will find a compromise that will permit the Garden to reach its institutional objectives without sacrificing its unique beauty and national significance. 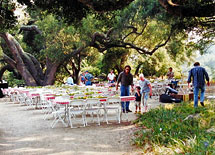 Original informal special events area under
the oak that once framed the Meadow will be
replaced with the Meadow Terrace project if
permits are granted. 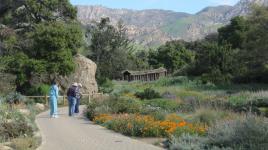 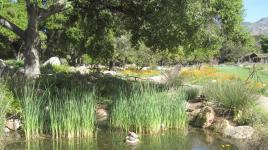 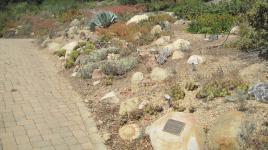 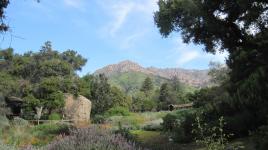