The City of Chicago is moving forward with plans to demolish the Walter Gropius, Lester Collins, Hideo Sasaki Design designed-complex as part of its bid for the 2016 Summer Olympics.

A striking and unique complex of post-World War II buildings and integrated landscapes on the Chicago lakefront, the former Michael Reese Hospital campus today is eminently threatened with demolition. It was largely planned and designed by Walter Gropius, with grounds designed in close collaboration with landscape architects Lester Collins, Hideo Sasaki and Paul Novak. The site is a rich repository of Modernist design unlike any other, however, as Chicago moves forward with its bid for the 2016 Summer Olympics, the City has begun clearing building interiors and soliciting demolition bids for the overall site.

The campus represents the only built work of Gropius in the state of Illinois and, unfortunately, has been largely forgotten. Nevertheless, this was a major project for Gropius and his firm, The Architects Collaborative (TAC), with nearly continuous involvement for at least 15 years. Gropius executed the master plan for the site, and advised on many diverse matters, from urban design to neighborhood planning. He then worked with a number of celebrated practitioners to develop these plans, including its landscape, and later collaboratively designed at least eight of the buildings that stand today.

The original Gropius Plan dates from 1945-1946. In 1953, Lester Collins, then head of landscape at the Harvard Graduate School of Design, was commissioned to work with Gropius on the site plan and landscape design for a large section of the campus currently being developed. The Gropius-Collins plan carried forth in great detail the central section of the campus, neatly merging architecture and landscape, and included all aspects of site planning, with meticulous urban design. The plan called for many of the site’s most prominent features, such as its axial approach. A long brick garden wall flanks the approach which runs through the partially raised, main hospital building into the central open space, two acre Pfaelzer Park, fusing the site and architecture into an inseparable whole.

In June 1953, Collins wrote in a planning staff report that the efforts were looked upon as having “near and far definitions.” The designers, he said, were thinking “of the hospital campus in relation to American living for one hundred years—and more. … [It] should be designed, as hospital rooms are designed, caring for human beings.”

When Collins left Harvard for Japan, Hideo Sasaki was brought to the team by Gropius and Reginald Isaacs, a former student and colleague of Gropius at Harvard, and then director of planning for Michael Reese Hospital. This would become one of Sasaki's earliest private commissions. Sasaki worked to strengthen and fully develop the basic schemes that Collins and Gropius had developed, and then made many significant contributions of his own. Paul Novak, a student of Sasaki's at the University of Illinois and his first partner, worked closely with Sasaki and stayed with the project after he returned to Illinois in 1957.

The Reese project allowed Sasaki to become directly involved in one of the issues that mattered most to him in his early career, the betterment of depressed inner-city neighborhoods, while also providing a springboard from which to launch his larger practice. Further, it helped demonstrate the viability of the collaborative approach to landscape practice that he would pioneer, modeled closely on Gropius’s own strategy and ethos.

The intention of the landscape architects, and of the deeply socially committed Michael Reese Hospital Board, was to fashion a series of spaces that would contribute to the healing of the hospital's patients, both directly as they moved physically through the landscapes, and passively as the landscape created "a volume into which sick people …will be looking from two hundred different windows." But their ambitions were much larger: They planned to cure the social and physical disease of urban decay by creating a humanized environment that would benefit an entire city neighborhood, an integrated landscape that would last for posterity. Their design principles were much the same as those of the Modernist architects of their generation – useful, simple, beautiful, and low cost. And their design solutions were clever and contextual, ranging from low berms to hide parked cars and deflect traffic noise, to gently framed views of Lake Michigan. The Sasaki and Novak designed parks, open spaces and site features remain largely intact today—inventive and entirely unique in the Chicago region. There are at least 3 distinct Sasaki landscapes executed at Michael Reese Hospital, in addition to the overall master planning effort. A fourth developed park at the site is the sole work of Paul Novak. Pfaelzer Park, which closely follows the Collins plan but was finalized by Sasaki, is the most formal, a central space dominated by trees and diagonal pathways, with a grand sloping approach between the buildings and the aforementioned dominant garden wall. To the south, Rothschild Park, the commission of which was first proposed to Sasaki and Novak in fall, 1956, is a more relaxed setting.  The design of this space, in the Modern manner, beautifully integrates the naturalistic with the clear presence of a human hand. It features a series of organically arranged berms, carefully articulated, playfully adding topographic richness to the typically flat Chicago terrain. At the same time the design increases privacy and comfort for the low Convalescent Home that overlooks it.

Today, the City of Chicago plans to level the site to make way for the proposed 2016 Olympic Village. Even should Chicago not win the Olympics, the plan is to clear the entire site, which spans many city blocks, and replace what is there with a new residential development. Despite vocal calls by preservationists and critics to pause the process, allowing an investigation of alternatives, the tabula rasa bullet train speeds along: The Request For Qualifications for demolition bids was issued on April 10, 2009.

While the staging of the Olympics in Chicago as currently proposed would endanger a number of Nationally significant historic designed landscapes (including Olmsted’s Washington Park), the Michael Reese landscapes are the only ones that will be destroyed regardless of the bid outcome. Furthermore, the campus is the most imminently threatened, as large dumpsters are already installed at the site, with interior work on several structures having commenced. 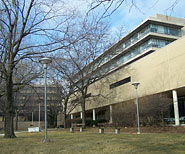 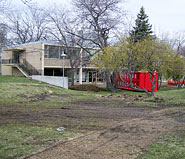 Retention and preservation of these important works is not counter to Chicago’s Olympic vision. We are convinced it would be to Chicago’s benefit—both for the Olympic bid and in the long-term—to preserve this unique and historically significant design: for its history, beautiful and mature vegetation, a commitment to the environment, and for the artistry it brings to Chicago’s Southside. Furthermore, there is ample room at the site for new development, such that a creative solution incorporating these contributing buildings and landscape features could be devised fairly readily. This position has already been echoed and endorsed by a number of prominent individuals and organizations.

A general lack of public awareness regarding the history of the design and the extent of these designers’ involvement, has made the site virtually invisible, however, recent research has brought its significance to the forefront. This masterful, historic landscape design deserves to remain and grace our city for years to come.

"Sasaki made Novak a partner, and the two worked on the office's most complex project to date—consultation on the Michael Reese Hospital master plan, directed by Reginald Isaacs. This effort to transform a slum district on the South Side of Chicago could be dated to the years immediately after World War II when it was decided that the hospital would remain in the inner city and retain its capital investments in the area rather than risk grave financial losses. (Illinois Institute of Technology and the University of Chicago did likewise.) But to shore up the investments and attract the best qualified people, the deteriorating environment had to be renewed and new facilities built. Walter Gropius had been retained as a consultant to the Michael Reese Hospital planning staff in 1945. In time, he served as their consulting architect along with his firm, TAC, and the Chicago architectural firm of Loebl, Schlossmann and Bennett. Sasaki and Novak provided concepts for the master plan, site designs, grading, working drawings, planting plans, and specifications." Michael Reese Hospital and the Olympic Village: Buildings that once healed are now the victims
Apr 22, 2009
Chicago Tribune
Press Coverage