Let's Expand the Debate Over the Elizabeth Street Garden

Let's Expand the Debate Over the Elizabeth Street Garden

Since the Haven Green housing project was announced near the end of 2017, the question of the Elizabeth Street Garden’s continued existence has been largely framed as an unambiguous choice between open space and affordable housing—a lamentable choice, too, because most New Yorkers realize that more of both is sorely needed in their city. And while it is true that the contentious, City-backed plan to construct a seven-story-high, mixed-use building would remove a cherished oasis of green from a neighborhood underserved by parks, there is more at stake than the loss of open space. 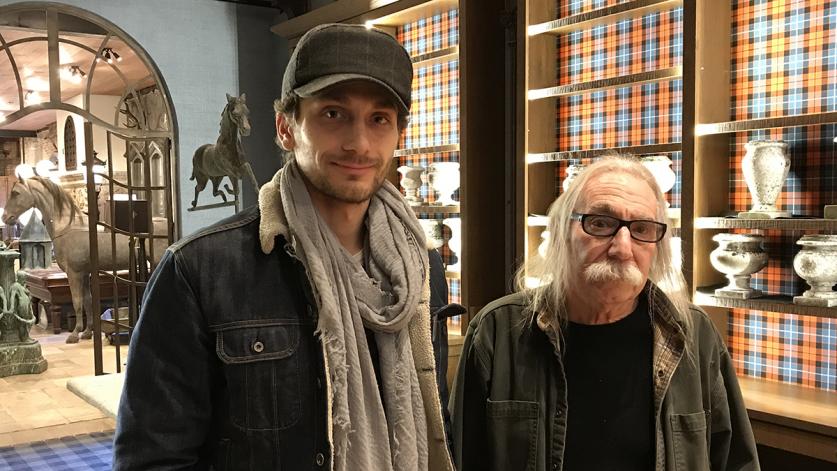 Allan Reiver (right), the founder and creator of the Elizabeth Street Garden, and his son Joseph. - Photo by Charles A. Birnbaum, 2018

As TCLF told Curbed New York in January 2019, “every effort should be made to prevent the Elizabeth Street Garden’s demolition and…a determination should be made about whether the garden should be evaluated as a contributing feature in the Little Italy Historic District.” It is worth pausing to focus on the second part of that quotation because the one-acre garden is not only a shady respite in a sea of asphalt; it is also a place where two longstanding, local traditions happily converge: community activism and outsider art.

The Elizabeth Street Garden was not the brainchild of a department, bureau, or committee who analyzed and processed a plan backed by tax-payer dollars; it was conceived as an individual act of beneficence, creativity, and neighborhood improvement—something both personal and communal at the same time. Local gallery owner Allan Reiver leased the vacant plot from the City of New York in 1991 and brought the garden to life on his own. In that way, the Elizabeth Street Garden is planted squarely in the tradition of the Liz Christy Community Garden, another local green space that took root in 1973 when Ms. Christy and her Green Guerillas transformed an abandoned lot in Manhattan’s Bowery neighborhood into an abundant vegetable garden. The urban community-garden movement that Christy helped ignite eventually spread throughout the country, and the garden was honored in 2013 with a listing in the National Register of Historic Places as part of the Bowery Historic District, which thus has a designated period of significance that spans nearly 350 years, from 1626 to 1975. (Readers can also look to Frances "Fannie" Griscom Parsons (1850-1923) to see just how deep the roots of the city’s community gardens really go). 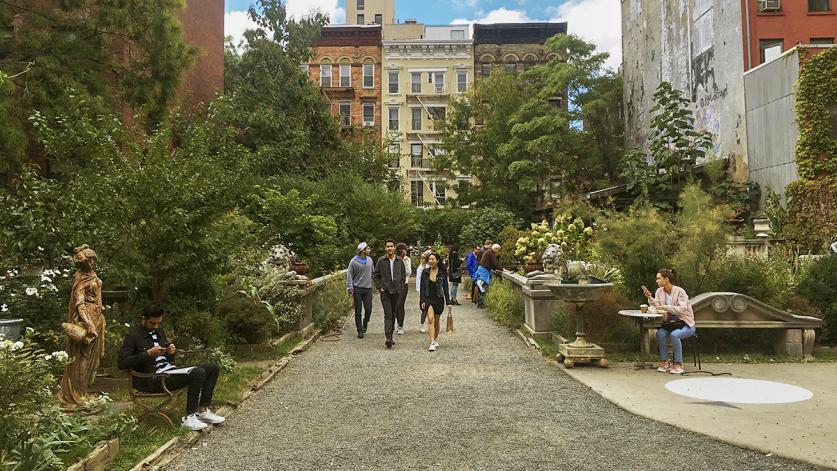 But as the many visitors—reportedly 100,000 annually—to the Elizabeth Street Garden know well, Reiver’s creation was not designed to edify the body, but rather to nourish the spirit. Using neoclassical sculptures from his own collection to enliven the space, he designed an intimate yet whimsical community sculpture garden that also takes shape around salvaged and repurposed architectural elements. The L-shaped garden is linked to the street by a gravel path edged with a stone-and-granite balustrade designed by French landscape architect Jacques-Henri-Auguste Gréber. The balustrade was removed from the 36-acre Lynnewood Hall, considered to be one of the largest Gilded Age mansions in the Philadelphia area. In its new location, it acts as a bridge connecting the east and west ends of the garden, funneling visitors in and out while also serving as an axial framing device, placing the visual focus on the garden’s urban context by “borrowing” the view of the neighborhood’s signature tenement-style houses. In addition to repurposing Greber’s balustrade, Reiver also incorporated in the garden a copper gazebo and a pair of columns designed by Olmsted Brothers for Burrwood (the former home of Walter Jennings), which now act as both an intimate nodal space and a pair of sentinels at the entrance, serving as a gateway while establishing the language of Reiver’s installations.

In this way, the Elizabeth Street Garden is an Outsider Art garden—a landscape representing an individual artistic expression, conceived by a non-professional designer and executed in a creative style all its own. Ginia Bellafante of the New York Times recognized as much in an article on March 15, 2019, when she referred to the garden as the creation of “an outsider artist named Allan Reiver.” 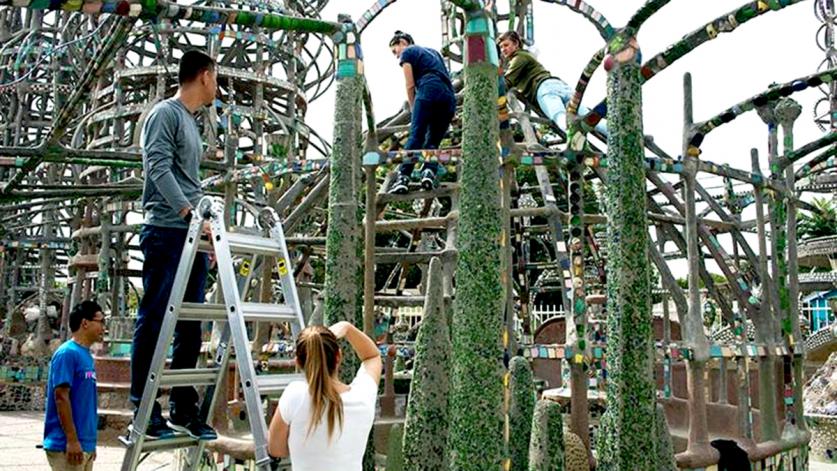 The fact that the garden is a work of outsider art affects decisions about the level of stewardship and protection that it deserves. The creations of outsider artists have long been categorically recognized as eligible for historic designation at both the local and national levels. Several such landscapes around the nation now enjoy historic designation. One thinks of Coral Castle in Miami-Dade County, Florida, listed in the National Register of Historic Places (NRHP) in 1984, or the Garden of Eden in Lucas, Kansas, so designated in 1977. Yet another exemplar is Watts Tower, built over a 30-year period by outsider artist and immigrant Sabato Rodia (1879-1965) in a densely urbanized residential neighborhood in Los Angeles, California. The site’s Mosaic Garden was built from salvaged and repurposed materials, and after narrowly avoiding destruction, it was added to the NRHP in 1977 and designated a National Historic Landmark in 1990. The site was also one of several landscapes created by outsider artists that were featured in TCLF’s Landslide 2014: Art and the Landscape, a thematic report about at-risk sites that included the Heidelberg Project, for which Detroit native Tyree Guyton repurposed vacant houses and also incorporated cars and trees in a stretch of the city’s Heidelberg Street neighborhood, creating a fantastical series of themed environments using discarded shoes, clocks, bicycles, stuffed animals, and various other items.

When the Landslide 2014 report was released, TCLF noted that “site-specific works of art in the landscape rank among the most organic and historically significant representations of our cultural identity and are often the most threatened.” The recent book World Heritage and National Registers: Stewardship in Perspective echoes that statement, finding that visionary-art environments are “nationally significant historic resources...Without the national recognition afforded by programs such as the National Register of Historic Places, these historic visionary-art environments face an almost insurmountable challenge of garnering the support necessary to maintain these delicate and rapidly vanishing sites.” 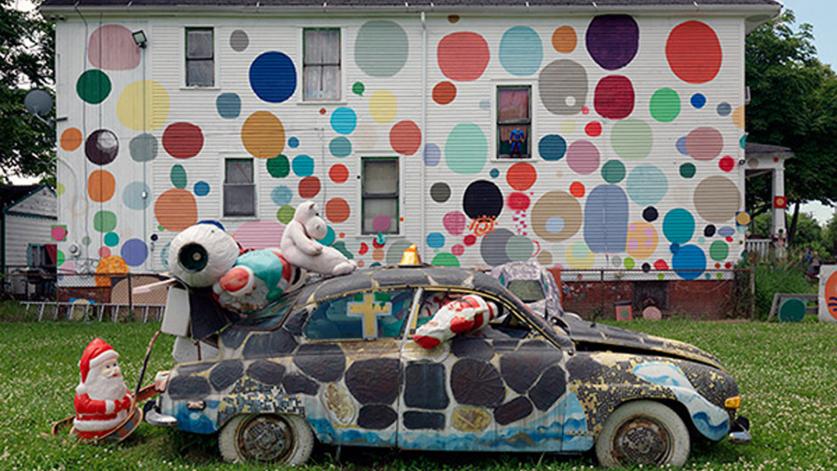 It is with these sentiments and precedents in mind that the relationship between the Elizabeth Street Garden and the Chinatown and Little Italy Historic District, where it is located, should be re-evaluated. The nomination for the neighborhood's historic designation was written in 2009, and the designation conferred in 2010, with a period of significance spanning from 1800 to 1965—a period that does not include the Elizabeth Street Garden. But now, a decade after the nomination was formulated, Reiver has retired and has gifted to the community, in perpetuity, important architectural elements in the landscape. His work as an outsider artist should now be evaluated in its proper context, and the historic district’s period of significance expanded accordingly.

The Elizabeth Street Garden is much more than just generic open space; it is a purposefully designed cultural environment rooted in the dual traditions of community activism and outsider art. As the debate about the garden’s future continues, these intrinsic cultural associations should be considered along with other metrics—such as square footage, sunlight, stormwater run-off, and temperature—when assessing the value of the garden. There is a strong case to be made that, by the City ‘s own definition, the Elizabeth Street Garden should be designated a New York Landmark: “Landmark designation is a special status added to a place or building officially recognizing the outstanding historical, cultural, or aesthetic value of that place,” and as “an important part of the City's heritage the [Landmark Preservation Commission] must approve in advance any alteration, reconstruction, demolition, or new construction affecting the designated building.” 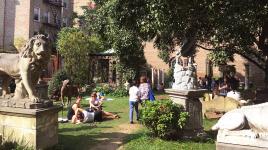