Greater Los Angeles’ collection of garden apartments, with nearly fifty examples identified, is the second largest and arguably one of the most significant in the country. Like other examples nationwide, the garden apartments of Los Angeles represent the fruition of innovative concepts developed by visionary early 20th century reformers who believed that all people, regardless of income, social standing, and in many cases, ethnicity, were worthy of better and more humane housing. They developed forward-thinking planning, architecture and landscape design principles and thought deliberately about every aspect of their design, believing that easy access to fresh air, recreation and shared open green spaces would create strong community bonds and an easy sociability.

Though loved by generations of residents, these garden apartments are increasingly vulnerable to demolition and redevelopment. Because of the threat, the Los Angeles Conservancy recently launched its L.A. Garden Apartment Network with a day-long “I Heart Garden Apartments Day!” symposium and tour at the Village Green (Baldwin Hills Village). With this new network, the Conservancy hopes to foster a connection between the various garden apartment communities while building greater understanding and appreciation for these developments overall. 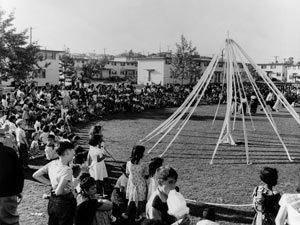 Children at Ramona Gardens, some of whom had formerly been
raised in slum conditions, enjoy a May Day Festival. Courtesy
Los Angeles Public Library.Clarence Stein’s influence

The garden apartments of Los Angeles can trace their origins to Garden City concepts Ebenezer Howard first developed in late19th century England. His ideas were adapted for use in the United States by planner/architects Clarence Stein and Henry Wright with landscape architect Marjorie Sewell Cautley, first at Sunnyside Gardens in Queens in 1924, then more extensively at Radburn, New Jersey in 1928.

In Los Angeles, the designers of garden apartments built upon Stein and Wright’s Radburn Plan principles while developing a property type that was regional in both its appearance and function. With its benevolent climate and ample undeveloped land, Los Angeles was perhaps the ideal place in the country for garden apartments to thrive. As the 20th century progressed, architects and landscape architects were exploring the relationship between indoors and out in the construction of single-family homes. Nevertheless, garden apartments offered apartment dwellers the same easy access to outdoor living that all modern residents of Los Angeles desired. Clarence Stein served as consulting architect for three Los Angeles garden apartment communities – Carmelitos, Harbor Hills and Baldwin Hills Village. 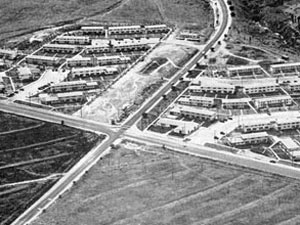 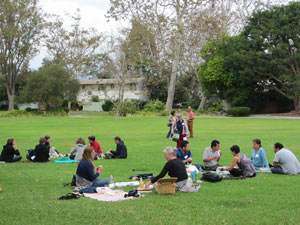 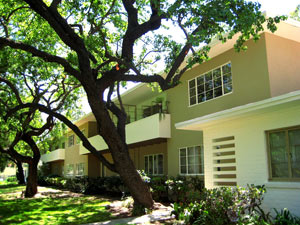 The two leading landscape proponents of the movement were landscape architects Fred Barlow, Jr. (often in collaboration with his partner Katherine Bashford) and Ralph D. Cornell. Other landscape architects included Hammond Sadler, Tommy Tomson, Thomas D. Church, Geraldine Knight-Scott and Eckbo, Royston and Williams. These projects often had constrained budgets, which challenged and inspired the designer’s creativity. Their landscapes were simple yet effective, with an emphasis on recreation, functional open space, and low maintenance.

While some of the garden apartments are protected – the Village Green is a National Historic Landmark, for example – others have been targeted by owners and developers eager to take advantage of their low density and comparatively luxurious open spaces.

Wyvernwood, Los Angeles’s first large-scale garden apartment community, is threatened even though it has been determined eligible for the National Register of Historic Places. The current owners have developed a plan that calls for the site’s demolition, replacing it with a mixed-use development that includes several buildings as tall as 24 stories. Wyvernwood is not the only garden apartment complex in Los Angeles threatened with redevelopment. In 2000 the Los Angeles Conservancy began advocating for the preservation of Chase Knolls, and the following year began a ten year battle to save Lincoln Place in Venice. Fortunately, both were saved and Lincoln Place is now undergoing a multi-million dollar rehabilitation.

At the L.A. Garden Apartment Network event, residents from Wyvernwood shared stories of why their community means so much to them and how devastating it would be to lose it. Village Green resident Lucy Fried said, “I was very moved by the story told by the Wyvernwood speakers and am thrilled at the Conservancy's idea of a network.” She said the symposium, “gave me a whole new sense of the scope and complexity of the socio/economic and architectural history it embodies. It was the first time I had ever thought of Village Green as part of a family of similar developments. I had never thought of the human connection between our condominium complex and public housing complexes, even though I had noted many times the similarity in style. And all of that made me appreciate Village Green from a preservation standpoint as I never had before.” 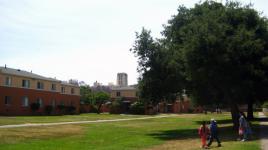 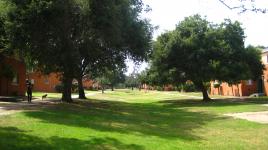