Boca Grande is a small unincorporated village on Gasparilla Island on Florida's southwest coast with a year-round population of less than 1,000. In winter the population swells to about 3,500. Spanish explorers visited the island in the 16th century and it was later settled by fishermen, many of Cuban and Spanish descent. Later it was used as a staging point for the worldwide shipment of phosphate. In the early 1900s gentry hailing from cities as far as Boston and Wilmington came by yacht and private railroad car to escape northern winters and enjoy angling for the area's celebrated tarpon. 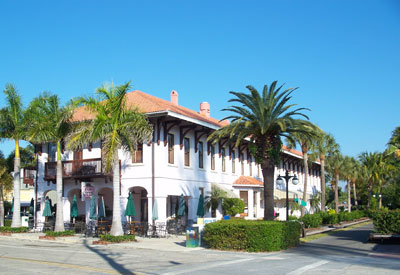 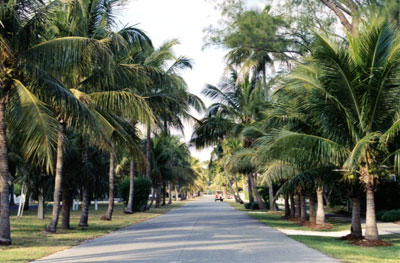 (upper) Boca Grande streetscape; (lower) View of Gilchrist Avenue
looking south, photo courtesy Lynne Siebert.Boca Grande is one of the few barrier islands in Florida that is not covered with high rise condominiums and choked with traffic. The island's escape from overdevelopment and its pristine natural beauty are in part attributable to the efforts of several dedicated patrons over the last century who worked diligently to preserve the island. Most prominent among these benefactors were Louise du Pont Crowninshield and Bayard Sharp whose lifetime devotion to the island saved it for future generations to enjoy.

Phosphate mining in the Peace River basin and Boca Grande's natural deep water port were incentives for the American Agricultural Chemical Company to acquire land, lay a railroad and construct a shipping terminal on the island around 1907. The company partnered with Albert W. Gilchrist to form the Boca Grande Land Company. Gilchrest, who would become the governor of Florida in 1909, owned considerable acreage in the middle of the island and had filed the first plat for the Town of Boca Grande in 1897. As was the fashion of the day in the railroad industry, a grand hotel was envisioned similar to Morton Plant's Tampa Bay Hotel and Henry Flagler's hotels in St. Augustine, Palm Beach and Miami. The Boca Grande Land Company hired Carl Rust Parker in 1911 to help develop plans for the town and a fine hotel, now the historic Gasparilla Inn. Parker had worked for the Olmsted Brothers firm for much of his career, but he was working independently between 1910 and 1919. He designed the grounds for the existing 20-room hotel, which was being expanded, and landscaped the principal streets of the village. His work followed the Olmsted philosophy that each designed space should have a single, coherent character. An example of this philosophy is reflected in Gilchrist Avenue, an elegant 120-foot-wide boulevard extending four blocks through the most desirable residential lots of the new town. Rust lined the street with coconut palms and landscaped the 60-foot-wide median with lawn and coconut palms to form a linear park. At the intersection of Fifth Street and Gilchrist, Rust's plans showed a proposed grand hotel on the gulf flanked on the north by hotel gardens and a concert grove and on the south by tennis courts and gardens where the Gasparilla Inn Beach Club stands today. The hotel was never built in that location. 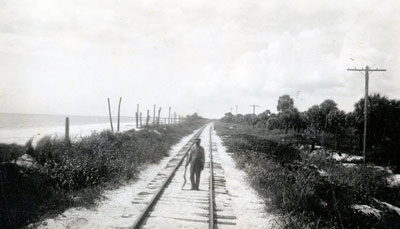 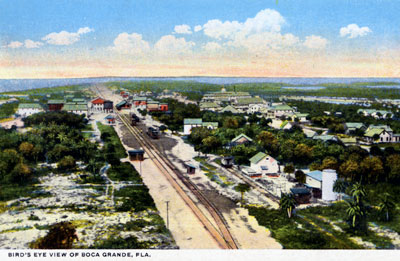 (upper) Curve in railroad, just north of the narrows; (lower) Birds eye
view of Boca Grande. Images courtesy of the National Park Service,
Frederick Law Olmsted National Historic Site.While Parker’s contribution to the design of the island was known to current residents, recent research has unearthed a new and surprising discovery about Boca Grande’s history. Residents searching in the Library of Congress and the archives of the Olmsted Brothers, recently found a file on Gasparilla Island containing hundreds of letters, telegrams and handwritten notes documenting previously unknown work the Olmsted firm did for the American Agricultural Chemical Company and the Boca Grande Land Company from 1924-25. The file holds a treasure trove of details about the Olmsted firm's involvement in the planning of the island. The Olmsted work preserved most of the Parker village plan and re-planned the beachfront and areas north of the village.

In the file are a number of letters from Frederick Law Olmsted, Jr. who visited the island in 1924. His nine-page report and description of the scenery of the day is a window back in time. Little had been done to maintain the Rust landscaping, or the commercial village buildings and the appearance of the area had begun to deteriorate. Olmsted's firm took on the task of reinvigorating the area, dealing with details as small as what color to paint the new school and the placement of bird baths about the property. One letter gives instructions on moving a boat house and preserving the mangroves lining the bayous where dredging and filling was planned. The relocation of the railroad was a major issue, and Olmsted wrote extensively on where to locate the proposed county road to the north of the village. 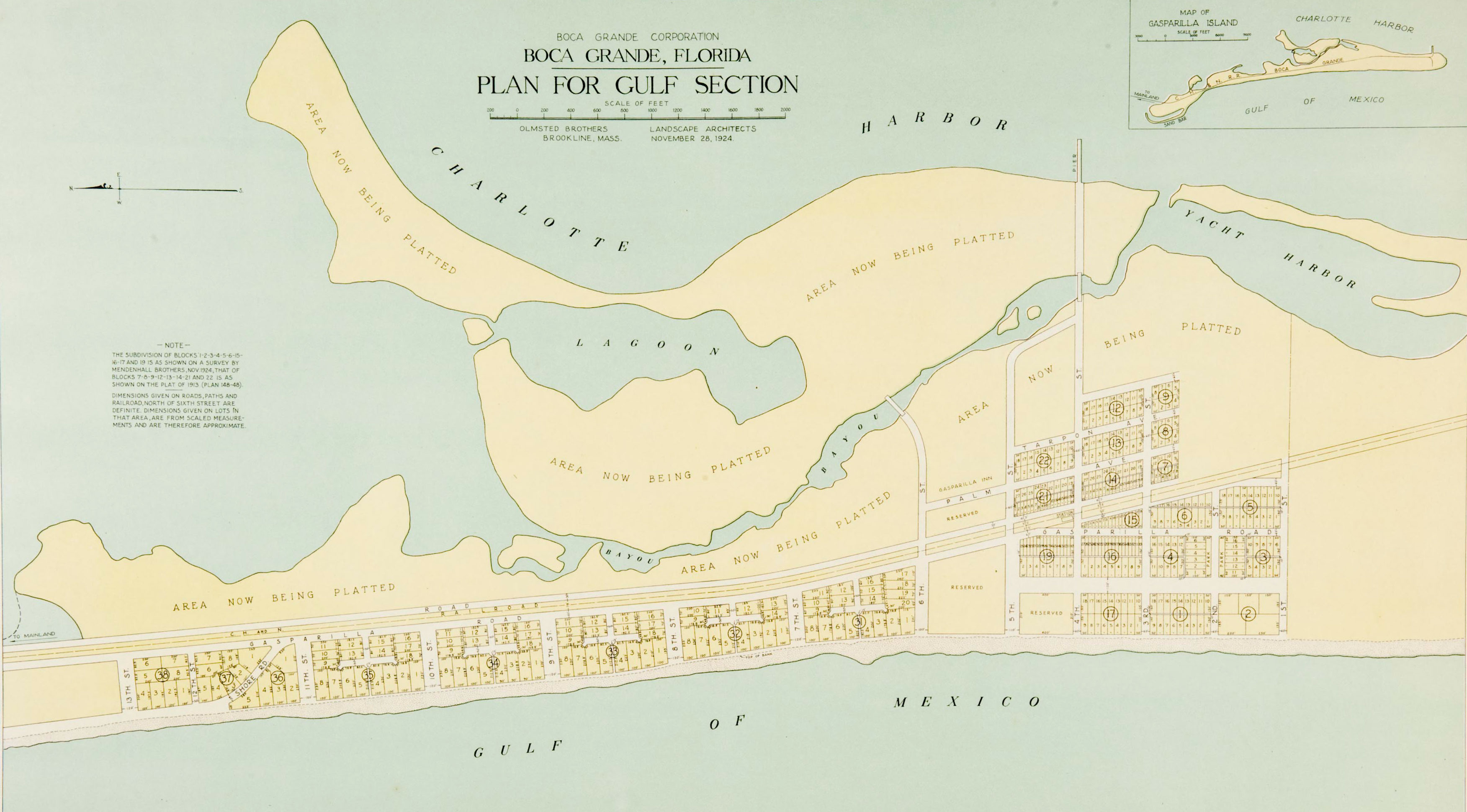 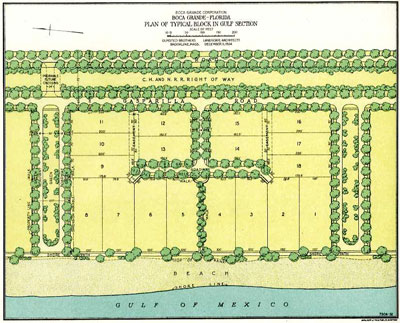 (upper) Olmsted Brothers plan for the Gulf section of Boca Grande;
(lower) Plan of a typical block in the Gulf section. Images courtesy of
The National Park Service, Frederick Law Olmsted National Historic
Site.A number of drawings related to this work have been identified at the Frederick Law Olmsted National Historic Site in Brookline, Massachusetts and they show that the existing county road and railroad follow Olmsted's plan. Today, the railroad right-of-way (ROW) is landscaped with native plantings much like Olmsted had envisioned.

Olmsted brought landscape architect William Lyman Phillips to the island for five months in order to design and supervise the job. Old photographs indicate it was likely Phillips who lined Fifth Street, East Railroad Avenue and First Street with casuarinas and added a distinctive allée of coconut palms and hibiscus to the Gilchrist median.

Phillips stayed in Florida and, in 1925 went on to work with Olmsted on the Mountain Lake in Lake Wales and Bok Tower Gardens. Phillips' many other projects in Florida, which include Fairchild Tropical Botanic Garden, Matheson Hammock Park and Greynolds Park, are well-known and treasured by Floridians.

It is noteworthy that the small, remote and almost forgotten village of Boca Grande was once master planned and landscaped by these three iconic professionals. The area their work encompassed is now protected as the Boca Grande Historic District. Unfortunately, there is little in Lee County's Historic District Ordinance to protect this remarkable landscape heritage. It is hoped with more public awareness that the work of these landscape masters can be preserved and restored to its historic grandeur.