New layers of the history at New York City’s Central Park were discovered during a recent archaeological investigation in the Fort Landscape, a six-acre portion of the park’s northern end, during a reconstruction project by the Central Park Conservancy. Remnants of a fortification system built to protect the city during the War of 1812 and the surface of the Kingsbridge Road, one of Manhattan’s most important historic roads, were uncovered. This new information provides a rare window into the pre-urban landscape of New York and highlights how the history of the Park began long before its design and construction. 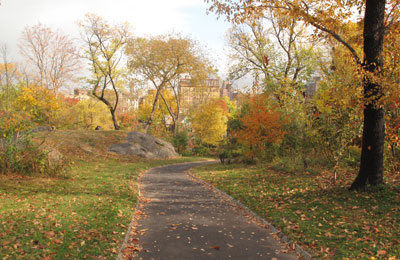 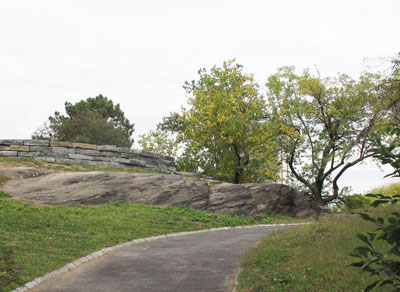 (upper) McGowan's Pass where the Kingsbridge road descended
through a small valley, a key point in the defense system during
the two wars; (Iower) A path leading to Nutter's Battery, an overlook
that marks the site of a fortification, after reconstruction in 2014.
Photos courtesy Central Park Conservancy.In the northeast corner of Central Park, a little-known landscape of winding paths, trees, rocky outcrops and shady lawns sits between the Conservatory Garden and the Harlem Meer. The site’s dramatic topography, with natural Manhattan schist outcroppings, is its most distinguishing feature; from the entrance at Fifth Avenue and 106th Street, a steeply ascending path leads to a series of rocky bluffs overlooking the Meer. The undulating hills, cascading outcrops, and expansive views combine to provide an impression of both spaciousness and intricacy. The site is located just north of the Park’s original boundaries delineated in the Greensward Plan, the winning design for Central Park by Frederick Law Olmsted, Sr. and Calvert Vaux, chosen in 1858. However, because the area was unsuitable for real estate development – it was too rugged, rocky, and wet – it was incorporated into the Park as part of an 1863 boundary extension. The Park Commissioners saw a virtue in the area’s character and vowed to “preserve as far as possible, existing bold and striking natural features.” Olmsted and Vaux’s design preserved much of the original topography, and includes large areas of carefully designed woodlands and bridges fashioned from rustic stone.

The area’s rocky heights were well suited for military defense. During the Revoutionary War the British occupied the area building fortifications and camping there. Americans took advantage of these heights during the War of 1812 building a system of three fortifications, with a gatehouse to control access to the Kingsbridge Road, the major road that traveled along the spine of Manhattan. While the area today bears the names of War of 1812 fortifications – Fort Clinton, Nutter’s Battery, and Fort Fish – little physical evidence remains. The defenses were visible in the 1860s, but  are now mostly known as outlines on 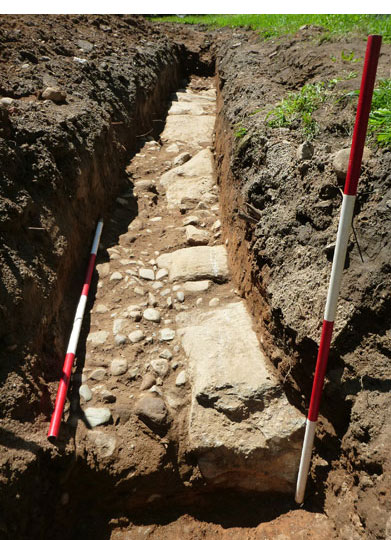 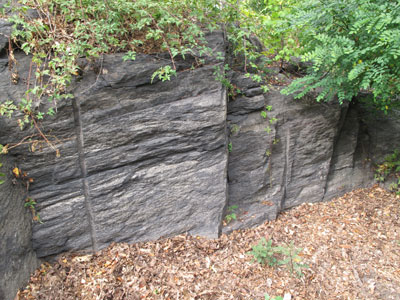 (upper) The excavation revealed the foundation of
the War of 1812 gatehouse and Kingsbridge Road;
(lower) Drill scars on rock outcrops in the Fort
Landscape are interpreted as evidence of quarrying
for stone to build the War of 1812 fortifications.
Photos courtesy Central Park Conservancy.period maps. Over the years the forts and earthworks eroded, and the fort locations were redesigned to serve as scenic overlooks.

As part of a reconstruction project in the area, in the summer of 2013, the Conservancy hired the consulting firm Hunter Research to conduct historical research and archaeological investigations to determine the impact of any new construction on extant historic resources.The archeologists began their work above ground and discovered evidence of the War of 1812 defenses including drill holes in rocks, likely for iron rods used to secure the earthworks; a line of boulders that formed part of the earthwork’s foundation; and scars on rocks interpreted as evidence of quarrying for building stone.

Archaeologists also uncovered the foundation of the gatehouse that controlled access along the Kingsbridge Road, built during the War of 1812, and the remains of the surface of the road itself, composed of compacted stones and sand on top of a bed of larger pebbles and cobbles.

These findings provide insights into the area’s palimpsest, before it was known as Central Park. This new research augments  understanding of the military history of this area, including how soldiers used and occupied the landscape and the discovery of the road provides a physical link to a vital piece of Manhattan’s early infrastructure that influenced the prominence of the area as a strategic location and determined its settlement patterns.The Conservancy is now beginning to develop a plan for interpretive signage in the northern part of the Park, and is considering ways to study and address pre-Park history more comprehensively, a project which it is hoped will help awaken visitors to this incredible legacy.