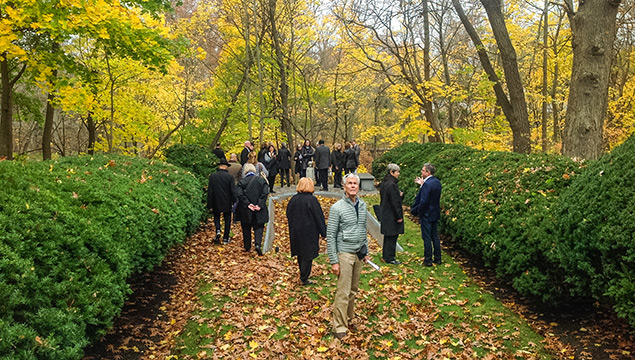 A sold-out daylong excursion, the launch of a new online city guide, the presentation of Stewardship Excellence Awards, and a record-setting silent auction highlighted The Cultural Landscape Foundation’s events in conjunction with the American Society of Landscape Architects’ Annual Meeting and EXPO, held this year in Chicago on November 6-9. Amid the gathering of thousands of landscape architects, allied professionals, and students, the popular and well-received events were crucial to raising funds necessary for the completion of Pioneers Oral Histories and other initiatives. Bartlett Tree Experts provided immeasurable support for the excursion, city guide, and reception, helping to launch the guide and honor the Stewardship Excellence Award winners.

On Friday, November 6, the excursion (titled Lake Forest: A Prelude to Modernism) took more than 50 attendees to Lake Forest, Illinois, where they were greeted by excursion curator Arthur H. Miller, the archivist and librarian for special collections, emeritus, at Lake Forest College, who gave a brief overview of what lay ahead. The first destination was the privately owned Charles F. Glore house, a two-story Usonian-style home designed by Frank Lloyd Wright and flanked by wooded ravines. Then came a stroll to Wyldwood, the estate built for Clyde Mitchell Carr on a bluff overlooking Lake Michigan and featuring a gabled entrance wing with striking and fanciful sculpted wrought-iron designs. Built in 1916 by architect Harrie. T. Lindeberg, the home boasts grounds designed by Warren Manning. Attendees were then taken on a driving tour around the Lakefront area and through Forest Park, before arriving at Market Square. Designed by architect Howard Van Doren Shaw and real estate developer Arthur T. Aldis and completed in 1916, Market Square was the first shopping center in the United States planned around the automobile. 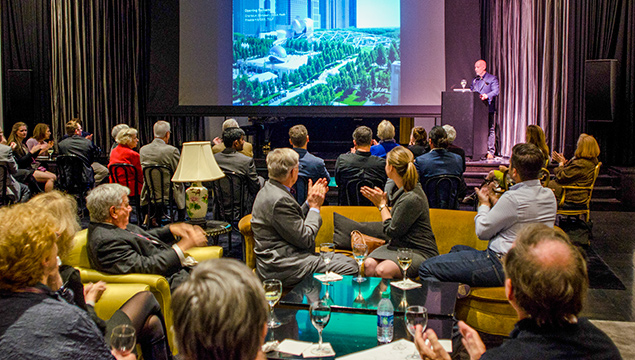 In keeping with past excursions, participants were treated to a festive and delicious lunch, this time at Market House, followed by a walk to the Art Deco William E. Clow, Jr., House, which features a distinctive entry forecourt and a garden level raised one story above traffic. Designed by David Adler in the late 1920s, the home was the second residence that the Clows commissioned from the architect. Finally, the group visited Lake Forest Public Library to learn more about the design and planning of Lake Forest. There, they viewed plans and renderings of the area created by the Foundation for Architecture and Landscape Architecture from 1926 to 1931.

The day concluded with a reception at the stylish Arts Club of Chicago, where 175 guests were treated to hors d’oeuvres and an open bar. In the adjoining salon, TCLF president and CEO Charles A. Birnbaum announced the launch of the What’s Out There Chicago Guide. This online, interactive compendium—the fourth in the ongoing series—is designed to raise the visibility of the landscapes and designers that have made Chicago great. Funded in part by the Richard H. Driehaus Foundation with additional support from Bartlett Tree Experts and Christy Webber Landscapes, the Guide was developed in collaboration with the ASLA Illinois Chapter and includes illustrated site profiles for nearly 70 landscapes, and brief biographies of some 30 designers. It also includes narratives about the history of the city's landscape architecture, providing critical background about the interconnectedness of all of the sites. And, as a digital resource, the Guide is flexible, allowing for the addition of sites and designer profiles.

The evening culminated with the presentation of two Stewardship Excellence Awards, which honored Chicagoans Cassandra J. Francis, former President & CEO of Friends of the Parks, and the late Peter Lindsay Schaudt, a former TCLF board member and principal of the firm Hoerr Schaudt Landscape Architects. Francis was chosen in part for the “exceptional courage, resilience, and principled determination” she demonstrated in an effort to prevent the confiscation of portions of two Olmsted-designed parks—Washington Park and Jackson Park—for use as the site of the Barack Obama Presidential Library. In her acceptance speech, she spoke about the challenges of protecting open spaces and the significant parkland held in the public trust. Schaudt was honored for “his long-standing leadership and collaborative efforts to achieve holistic and thoughtful stewardship through the practice of landscape architecture.” The award was accepted on his behalf by his widow Janet Schaudt, who was accompanied by her two children Elaine and Elliot Schaudt, and by Peter’s brothers and their spouses, Eric and Karen Schaudt, and Jim and Barb Schaudt. Douglas Hoerr concluded the program, reflecting on the life and career of his business partner Peter Schaudt. Many thanks are owed to the sponsors who underwrote the excursion and the reception, including Bartlett Tree Experts, Coldspring, Kelco Landscaping and Construction, and Maglin Site Furniture.

TCLF’s eleventh annual silent auction was the biggest in the Foundation’s history. The auction kicked off on Saturday morning, November 7, in the McCormick Place Convention Center. With 91 pieces of artwork up for bid by significant landscape architects, artists, and photographers, the auction was clearly a highlight of the two-day EXPO. Attendees were able to meet many of the contributing artists, including photographers Millicent Harvey and Marion Brenner, who were present to lend their support. Excitement was high as the final bids were placed and the results were announced at the auction’s close. By Sunday evening, the auction, excursion, reception, and city guide had raised over $300,000 for TCLF’s educational programming. Thanks go out to Annual Sponsor The American Society of Landscape Architects; to Lead Sponsor DeepRoot; to Presenting Sponsor Anova; and to Supporting Sponsors TUUCI, ADCOM Worldwide, The UPS Store, and Kornegay Design, as well as to all of our donors, for making the silent auction a great success. 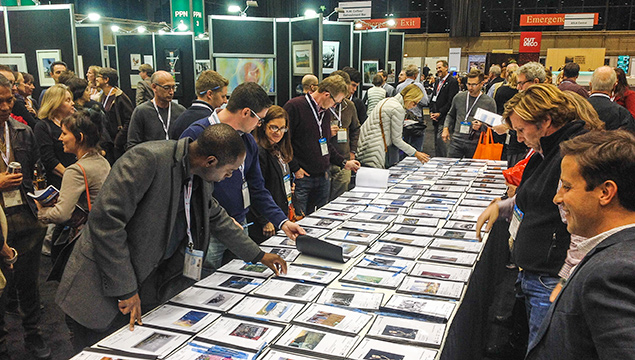