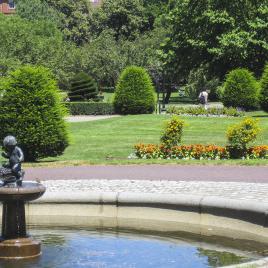 Meacham spent his early life in Watertown, Massachusetts. Following graduation from Harvard College in 1853, he worked briefly for the Jersey City Water Works. After returning to Boston he opened his own practice in 1857. Working as both a civil engineer and architect, his practice specialized in the design of monuments, churches, cemetery enclosures, and private estates.

In 1859 Meacham won the city-sponsored design competition for the Boston Public Garden, located adjacent to Boston Common. Meacham’s entry drew from contemporary approaches to landscape design and featured a combination of formal and Picturesque elements. At the center of the plan was a free-form pond or lagoon with a cast iron pedestrian bridge, surrounded by a curvilinear path system, and interspersed with planting beds and specimen trees. Formal elements included statues, entry gates, flower beds, fountains, a greenhouse, and spaces for public buildings. Meacham’s design was implemented by arborist John Galvin and city engineer James Slade.

Meacham went on to design institutional buildings throughout Boston and the surrounding suburbs, as well as several houses in the Back Bay neighborhood. Examples include the Hollis Street Church (1883, demolished), the Boston Bicycle Club (1884), the Eliot Congregational Church (1889, burned in 1956), and the Channing Church (1881). Meacham also prepared landscape plans for Farlow Park (1880s) and the Nonatum Office Park for the Silver Lake Cordage Company (1866), both in Newton, Massachusetts. Meacham died in Boston at the age of 86. 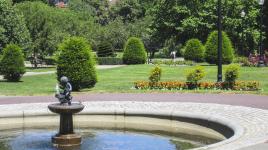