Capitalizing on views of the Statue of Liberty and Ellis Island, this waterfront park lies at the southern end of the borough of Manhattan in New York City. Named for a prominent New York public figure, the park is the last of the sequence of parks to be designed as a network of open spaces that comprise the 92-acre Battery Park City, an extensive mixed-use development begun in 1979. Robert F. Wagner, Jr. Park, which opened in 1996, was a collaboration of project lead Laurie Olin with Hanna/Olin, Lynden Miller who designed two gardens based on "hot" and "cool" plant colors, and Machado and Silvetti Associates who performed architectural services.

When the park opened in 1996, Paul Goldberger wrote in the New York Times that the park is “one of the finest public spaces New York has seen in at least a generation.”  He characterized it as a “lush void” and noted: “The heart of this 3.5-acre public park is a great rectangle of lawn, utterly empty, absolutely flat and tightly enclosed … Somehow it manages to feel as rich and as sensual -- and as tranquil -- as a thousand acres in the country, and it is a minor miracle.” 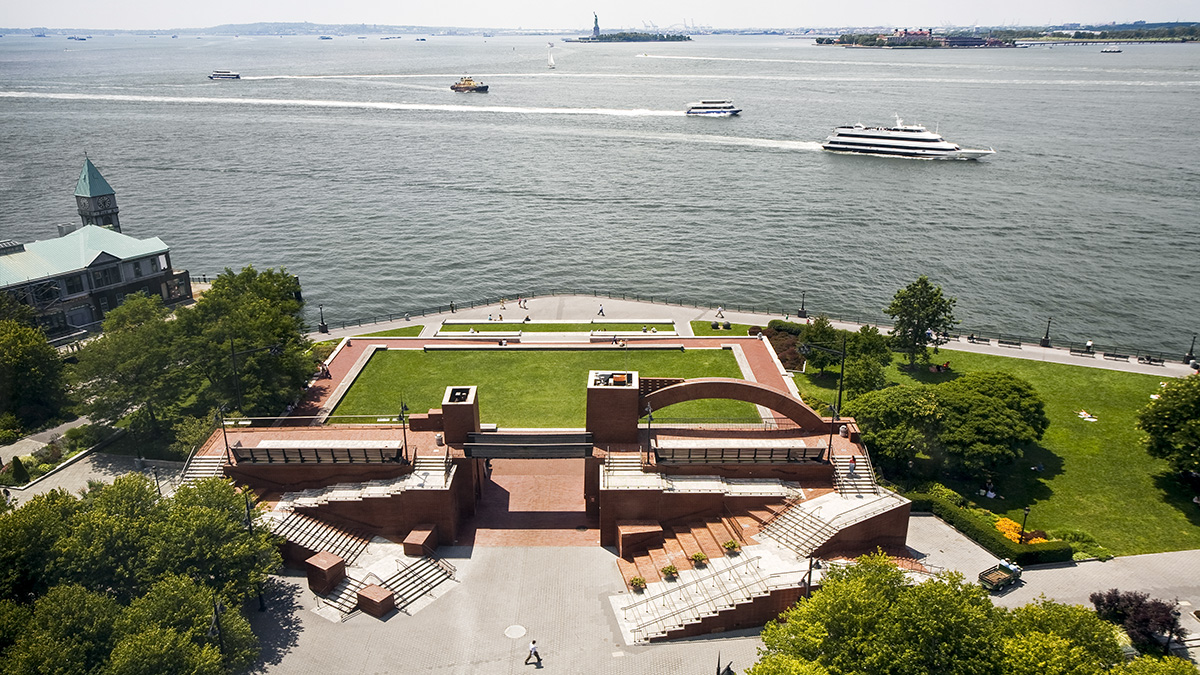 Robert F. Wagner, Jr. Park is located within Battery Park City, a 92-acre mixed-use community that was built on landfill created from New York Harbor dredge and the excavation of the World Trade Center site. Named after the adjacent Battery Park, the community houses numerous residential, commercial and retail buildings and nearly 36 acres of parks and open space. 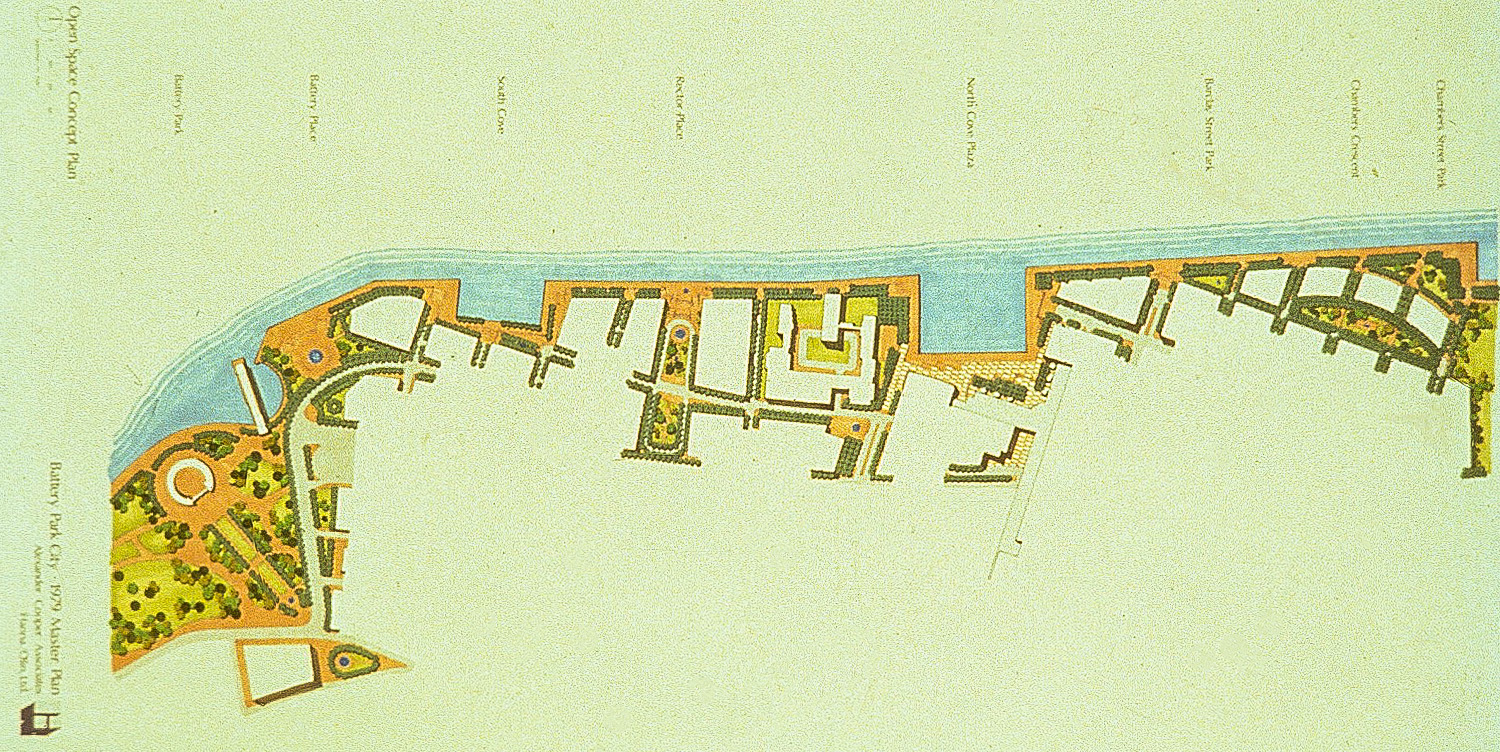 Stanton Eckstut and Alexander Cooper of Cooper Eckstut, with Hanna/Olin, created the master plan for Battery Park City in 1979. The plan’s 26 parcels were designed independently by different developers, creating a diverse neighborhood fabric that emulated the city’s mixed character. 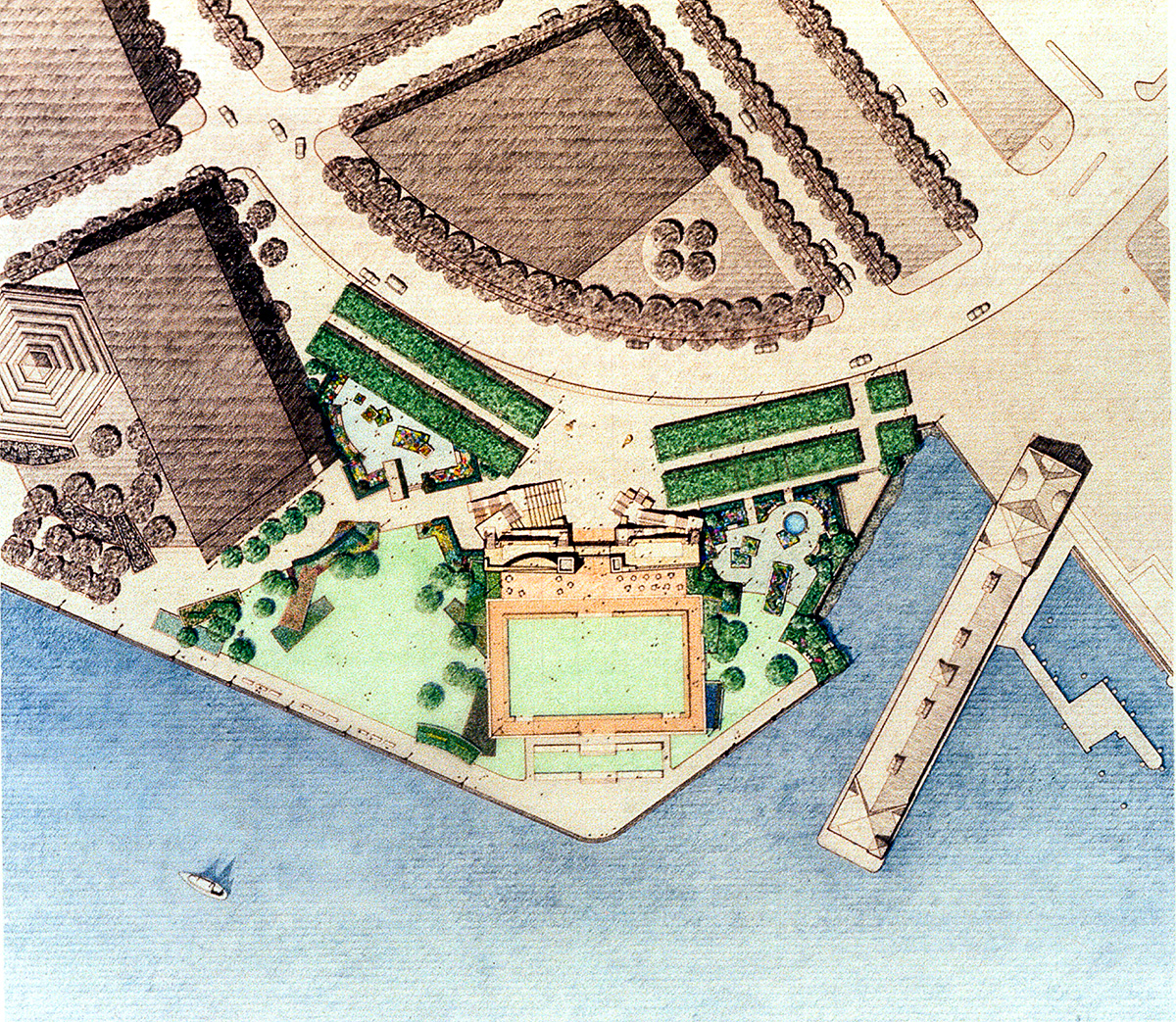 The Battery Park City Authority (BPCA) oversees the park. According to its website: “BPCA is a public benefit corporation created in 1968 under the laws of the State of New York for the purpose of financing, developing, constructing, maintaining, and operating a planned community development of the Battery Park City site as a mixed commercial and residential community.”

The collaboration of Laurie Olin with Hanna/Olin, Lynden Miller, and Machado and Silvetti Associates resulted in a significant work of postmodern design. This park is simultaneously a gateway to Battery Park City and an exclamation point at its end. The park also includes sculpture by Louise Bourgeois, Tony Cragg and Jim Dine. As architecture critic Paul Goldberger noted in his New York Times review: “What is most important is that every aspect of … [the park’s] design emerges from the realities of the park's surroundings -- the waterfront, the Statue of Liberty, the rest of Battery Park City and lower Manhattan -- and connects to the imperatives of human use.” The park is, in essence, in a constant dialogic position between past, present, and future. 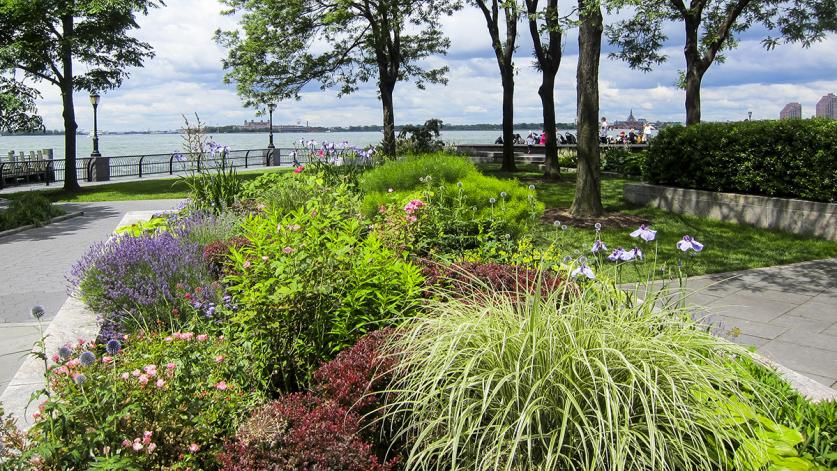 The 3.5-acre park is divided in half by a multi-level brick structure featuring a pair of pavilions. The eastern side faces the city: an open plaza is flanked by two allées of maple trees and punctuated with contemporary sculpture. The pavilions, which house a restaurant and public amenities, offer access to the park’s waterfront side. Visitors can either ascend to roof decks that overlook the park and offer panoramic views of the Hudson River or enter the park at grade through a framed opening on axis with the Statue of Liberty in New York Harbor. 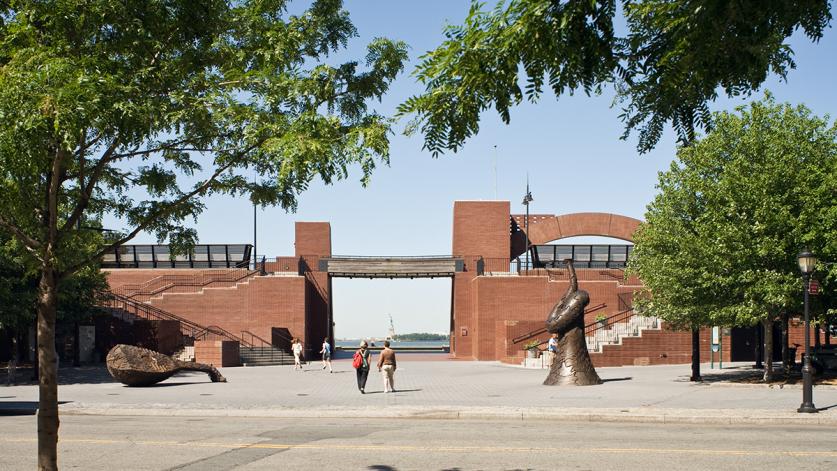 West of the pavilions, the park comprises a rectangular lawn, planting beds, and groves of trees. Contrasting with the densely planted native perennial and seasonal beds found elsewhere in the park, the billiard-like lawn is framed by a generous wood bench. Amphitheater-style seating composed of marble step seats overlooks the river and an esplanade connects Wagner Park to Battery Park City.

The park, despite being less than 50 years old, is worthy of an assessment as an historic resource for potential listing on the National Register of Historic Places. Moreover, as part of the larger Battery Park City ensemble – which Paul Goldberger touted in the New York Times as “a national model of civilized urban planning” – this rare East Coast foray into postmodernist design is deserving of greater scholarly attention and evaluation for its careful integration of architecture, landscape architecture, horticulture, and public art. The contributing elements of the park work together and are inseparable. In a 1999 article published in Studies in the History of Gardens & Designed Landscapes, Olin wrote, "The pavilions and the park appear to be both flying or falling apart and coming together at the same time. While almost anyone can feel and experience the energy of the agitated forms, a careful observer will see analogies to natural processes such as geologic plate tectonics, bedrock faulting, erosion, dispersion, and deposition, leaves and ice flows, organic and crystalline growth, with their formal structures on the one hand and the anthropomorphic tales and representations of these processes devised in antiquity on the other hand" (Olin, p. 114 & 120, 1999). Therefore, any proposed changes to Wagner Park should be considered not only to mitigate potential adverse affects, but also for the park’s role as an integral and inseparable constituent part of Battery Park City. 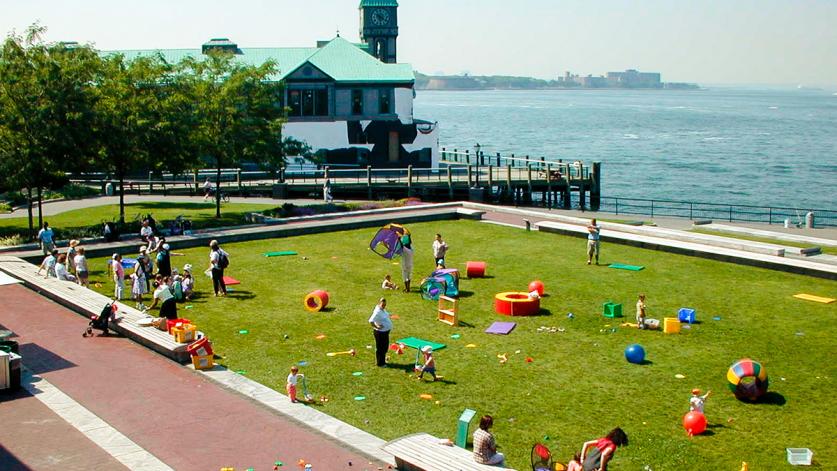 BPCA wants to replace Wagner Park with one that better aligns with resiliency measures following the impact of Hurricane Sandy in 2012, which resulted in extensive flooding in lower Manhattan and sections of the East Coast. According to the Broadsheet, “The BPCA’s preliminary outline for reconfiguring Wagner Park to withstand flooding during future extreme weather events calls for demolishing the pavilion that currently occupies the center of the park (and houses Gigino’s Restaurant and the public rest rooms), replacing it with a larger structure, and erecting on either side a series of columns that will support deployable walls to hold back rising waters.” In addition, the Broadsheet notes: “the restaurant would grow from the current 3,450 square feet to as much as 10,000 square feet.”

At a May 2, 2017 meeting of the Battery Park City Committee of Community Board 1 (CB1), BPCA spokesman Nick Sbordone is quoted as saying: “Hurricane Sandy was a stark warning about the perils of sea level rise and the susceptibility of Lower Manhattan, including Battery Park City, to its effects. In response to a threat we know is increasing, it is imperative to take concrete action now aimed at protecting the community and infrastructure we rely on. The clock is ticking.”

Significantly, while water did reach the lawns, the buildings at Wagner Park did not flood during Hurricane Sandy because the park was built to withstand a 100-year flood – it did the job it was designed to do. In a recent email, Laure Olin wrote: "When we did the actual design and construction for even the first phase of BPC following our 1979 master plan with Alexander Cooper we raised the entire site above what we understood the 100 year storm to be plus we added a surcharge (additional height) for storms and high tides."

By contrast, adjacent sites were flooded and critics of the proposed redesign, such as landscape architect Laura Starr, suggest that low-lying areas should be BPCA’s higher priority. In a conversation with Starr on May 29, 2017, she stated: “Topography is a fact – [Pier A] Plaza sits at a much lower elevation and should be addressed first. The solution of addressing that, which is a complicated situation, will likely generate a solution for the adjacent areas. The [proposed] integrated flood protection solution may not necessarily have to involve the most beloved areas of Wagner Park.”

Starr, a member of the Battery Park City Committee of Community Board 1, said at the May 2 meeting: “The solution may lie in elevating the street,” adding, “We need to see the whole design along Battery Place from Broadway to the Museum of Jewish Heritage. Until we have that, we don’t have a resiliency project.”

The proposed redesign would also result in a diminished tree canopy – one that would sacrifice 21 years of accumulated tree growth. The trees in Wagner Park have been well cared for and are now well established. 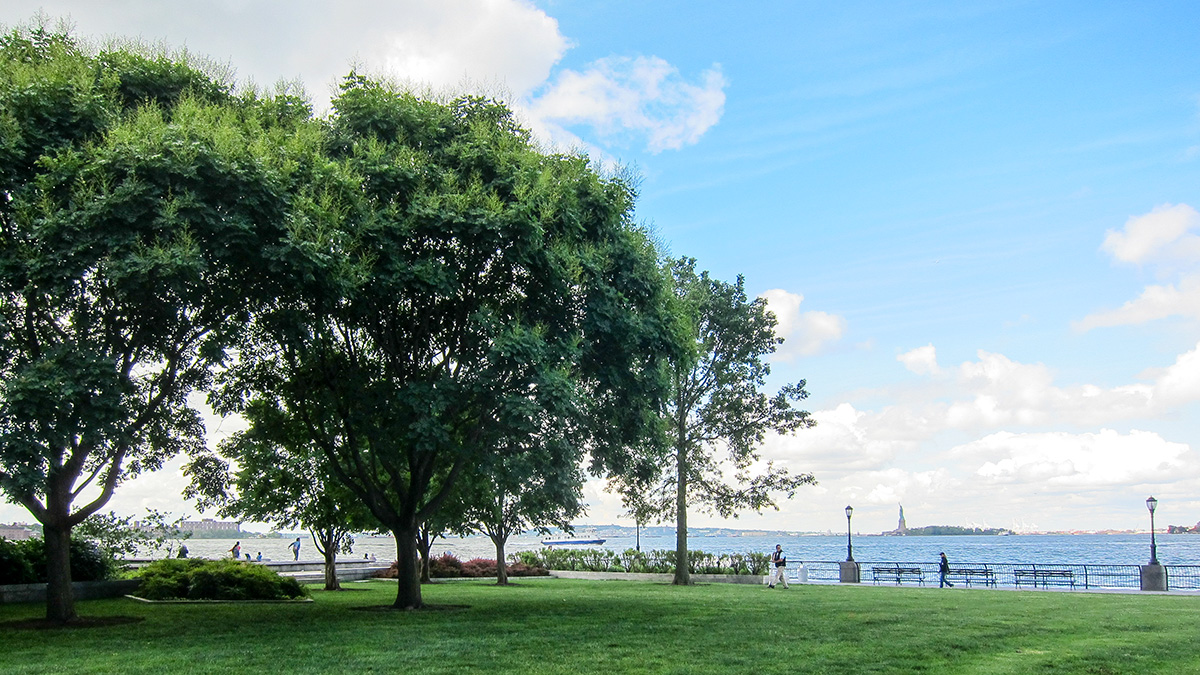 The proposals for Wagner Park are couched in terms of sustainability and resilience, but there may be other considerations. According to the Broadsheet, the owner of Gigino’s restaurant “pays $85,000 per year for the 3,450 square feet. This comes to an annual cost of $24.63 per square foot. According the Cushman & Wakefield Marketbeat Manhattan report, the current asking rent for retail space in Lower Manhattan is $403 per square foot.”

In fact, among the top five "Objectives" listed on page two of the BPCA's plan for Wagner Park is: "Provide better opportunity for food and beverage."  This is reinforced on page five in the section labeled "Existing Building Issues": "Not achieving food & beverage potential."

In the same email from Laurie Olin, cited above, he wrote that the BPCA "see the Wagner park site as a place they could make a fortune in revenue with a giant restaurant - it's déjà vu of Werner LeRoi and his proposal for a giant restaurant in Bryant Park."  He goes on to say: "Wagner Park in the form it is in at this moment is a highly successful social space contributing greatly to the life of thousands in the city; to destroy it on the premise that it will solve the impact of climate change on lower Manhattan when all the streets and every building for a mile or more around it remain lower than it is dishonest."

It doesn’t seem unreasonable to think there’s a desire to turn a “lush void” into a cash cow.

What You Can Do

Public input does make a difference. Please contact the following elected officials and members of the Battery Park City Authority to urge them to:

(Note that all of the names below are hot links to email addresses): 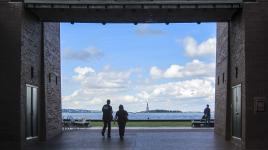 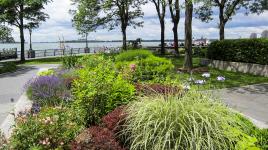