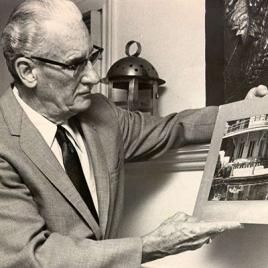 Born in San Antonio, Texas, Hugman graduated from Brackenridge High School and studied architecture and city planning at the University of Texas, Austin. He left school, without graduating, in 1924 and became a draftsman in New Orleans. Hugman returned to San Antonio in 1927 to practice architecture. A notable early commission was the Spanish Colonial Revival estate for William A. Turner (1928). After San Antonio’s deadly flood of 1921, there were plans to bypass the Great Bend in the San Antonio River with a new channel, and to reconceive the former as a paved storm drain. As early as 1929, Hugman forwarded his own plan (called “The Shops of Aragon and Romula”) to introduce riverside walkways along the Great Bend, creating a system of staircases, bridges, and other elements connecting shops, restaurants, and businesses. With funds in short supply, Hugman’s plans languished. During the Great Depression, he worked as a planner with the Works Progress Administration (WPA), helping to redesign Woodlawn Lake, Elmendorf Lake, and Concepcion Park. For the design of Walnut Springs Park in nearby Seguin, Texas, he placed stone walkways beside Walnut Creek.

In 1938, Hugman became the WPA architect charged to oversee a riverside beautification program in downtown San Antonio; that project would become the River Walk, much as he had conceived it years earlier. Hugman was fired from the WPA in 1940 amid political turmoil and design disputes. In 1947, he established the firm Hugman & Silber with architect Paul Silber. After the partnership dissolved, Hugman practiced alone before becoming the architect of Randolph Air Force Base from 1957 to 1972. With the growing success of the River Walk in the 1970s, Hugman finally received public acclaim. He died in San Antonio on July 22, 1980, and is buried there in City Cemetery No. 6. 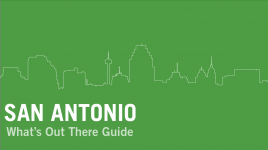 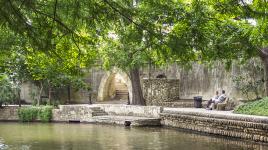