Jerusalem’s Haas and Sherover Promenades Are Under Threat

Jerusalem’s Haas and Sherover Promenades Are Under Threat

Located in Jerusalem, Israel, the Armon Hanatziv Promenade is a series of three linked promenades overlooking the Old City of Jerusalem from the south, forming a continuous linear landscape from the Jabl Mukabar neighborhood near its eastern terminus to Abu Tor to the northwest. Representing the collective work of renowned landscape architects Lawrence Halprin and Shlomo Aronson, the promenades are esteemed for more than their iconic design: they have become internationally known symbols of tolerance and hope as a place enjoyed by Jews and Arabs, religious and secular communities, and locals and visitors alike. According to the California Historical Society: "[Armon Hanatziv's] geographic location—between East and West Jerusalem—combines with its historic significance—it is the place where the 1967 Six Day War erupted in Jerusalem and the New Testament location of the betrayal of Jesus by Judas Iscariot—to provide a place of connection and peace."

But these dignified landscapes, envisioned as places of quietude and reflection, could soon be marred by a series of interventions aimed at creating a more active recreational environment featuring a "mountain of slides" and other theme-park-like amenities.

The Armon Hanatziv Promenade comprises a northwestern segment known as the Sherover Promenade, a central stretch known as the Haas Promenade, and an eastern segment known as the Goldman Promenade. Completed in 1987 and funded by the Haas family, the 1,300-foot-long Walter and Elise Haas Promenade was the first of the three segments to be built, the result of collaboration between renowned landscape architects Lawrence Halprin and Shlomo Aronson. Made of stone quarried from the local hills, it features several belvederes that frame views of the Old City. On the slopes below the promenade is the Peace Forest, as well as the ten-acre Ana and Moise Trottner Park, planted with groupings of cypress and rows of olive trees recalling the groves and fields of nearby vernacular villages, as well as the Mount of Olives, visible in the distance.

According to the California Historical Society:

Though composed of several sections, Armon Hanatziv is viewed as one unit known as the tayelet. As [landscape-architecture historian Kenneth] Helphand explains, “The tayelet is a distinct Israeli landscape that has elements of the Mediterranean corso, urban boulevard, waterfront promenade, and garden belvedere. They are grand terraces that connect the built environment to its larger context; urban living rooms, meeting grounds where people gather; they are part of daily life, and where visitors are taken.”

[Landscape architect] Sarah O’Leary observes that “The tayelet is a place of daily pilgrimage." 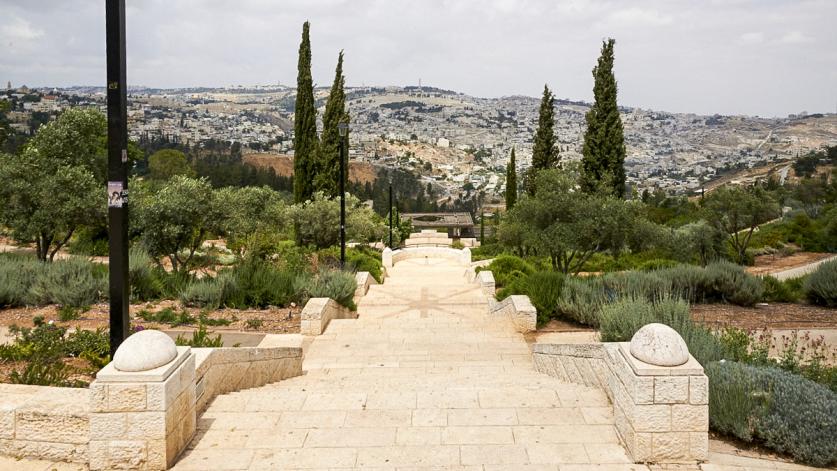 In 1989 Aronson completed work on the Gabriel Sherover Promenade, which adjoins the western end of the Haas Promenade via a grand staircase and has three large pergolas along its course. Beginning at the south, the first pergola occupies a slight depression created to direct views toward the Mount of Olives. A stone walkway flanked by olive groves and wheat fields leads north to the second pergola, and then to the third, constructed within a large, central belvedere and set amid beds of sweet pea and santolina. As the promenade winds its way north, it affords further views of the Old City and the Temple Mount before finally reaching the walls of the Monastery of St. Claire. Halprin and landscape architect Bruce Levin completed work on the Richard and Rhoda Goldman Promenade in 2001. An eastern extension of the Haas Promenade, it traverses the pine forest north of the United Nations Headquarters, overlooking the Judean Desert and the Kidron Valley to the east. 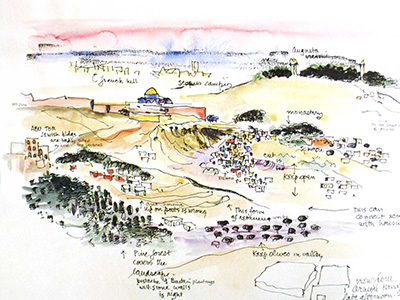 Born in New York City and raised in Brooklyn, Lawrence Halprin (1916–2009) spent three years on a kibbutz in the British Mandate of Palestine (now Israel) before returning to the United States, where he established a groundbreaking practice in landscape architecture. In a prolific career that spanned more than five decades, he would become one of the foremost Modernist landscape architects of the twentieth century, designing the iconic Franklin Delano Roosevelt Memorial in Washington, D.C., the revolutionary Sea Ranch in California (influence by his kibbutz experience), and the Open Space Sequence in Portland, Oregon, among many exceptional accomplishments. His firm was a seedbed for many talented designers eventually celebrated in their own right, including Shlomo Aronson.

According to the California Historical Society:

Halprin would return to Israel throughout his life—to work and to visit. Among the projects he planned are the Givat Ram Campus of Hebrew University, the Weizmann Institute in Rehovot, and national parks. In the aftermath of the 1967 Six Day War, he was a member of an international committee advising Jerusalem Mayor Teddy Kollek on new city planning and design.

Halprin designed the Hadassah Medical Center Master Plan at Ein Karem, the entrance to the Israel Museum in Jerusalem, and Jerusalem’s downtown Ben Yehuda Pedestrian Mall. He “had an abiding interest and palpable affection for the Jerusalem landscape,” the landscape architecture historian Kenneth Helphand notes.

Among his many celebrated projects in Jerusalem, the Haas Promenade represented something special to Halprin, as Paula Dietz wrote in the New York Times in 1995:

"By a quirk of fate, Mr. Halprin lived on this site as a boy when his parents brought him to Israel, and he remembers gleaning wheat from the neighboring fields after the harvest. From his early memory of the land grew the idea that the slopes below the promenade should be planted to suggest the fields and olive groves surrounding local villages."

As noted in the transcript from TCLF's oral history with Halprin, his mother was the president of Hadassah and an assistant to David Ben-Gurion, the first prime minister of Israel.

Born in Haifa, Israel, Shlomo Aronson (1936–2018) is known as the 'Olmsted of Israel' (a reference to the founder of landscape architecture in the United States, Frederick Law Olmsted, Sr.) for his influential role in shaping the modern nation of Israel. He enrolled at the University of California, Berkeley, to study architecture, but after meeting Halprin, whom he would later consider a mentor, Aronson switched his course of study, earning a bachelor’s degree in landscape architecture from Berkeley in 1963. He then went to work with Lawrence Halprin & Associates before earning an M.L.A. from Harvard’s Graduate School of Design in 1966, returning to his native Israel two years later. There he would develop a multidisciplinary practice that would in many ways chart the course of the profession in Israel over the next four decades, undertaking work on parks, promenades, plazas, gardens, national parks, university campuses, and other commissions. 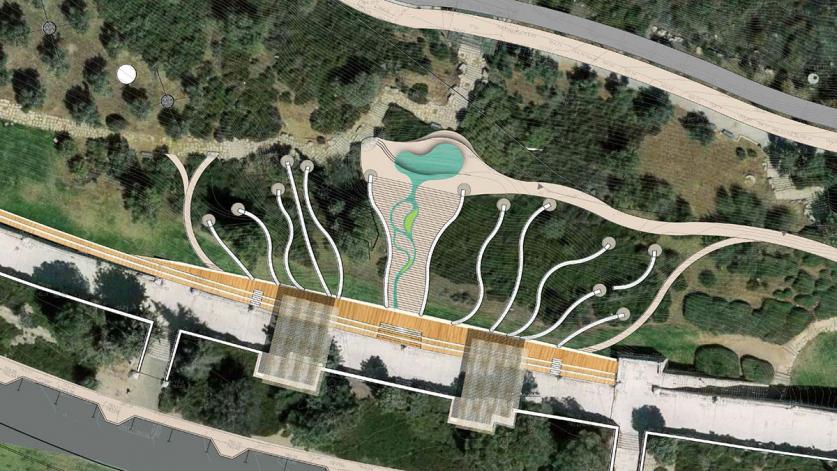 A new plan, initiated by the City of Jerusalem and developed by Mayslits Kassif Architects, has been proposed to “upgrade” portions of the Armon Hanatziv Promenade and is now being seriously considered. The proposal includes a major new venue for children in the form of a “mountain of slides,” beginning on the central plaza of the Haas Promenade and descending the slope to Trottner Park, below. A water feature would also be added to the promenade, as well as a new café, service building, administrative office, and a monument for the victims of the 2017 terrorist attack that occurred there. The plan also calls for the addition of several bicycle paths to the Sherover Promenade (paths are planned in the future for the Haas), as well as changes to lighting features and pavements. Costs for the first stage of the project are estimated at NIS 45 million (approximately $12.4 million).

A primary objective of the new design is to make the promenades more tourist-friendly, given that there are now plans to add facilities for some 2,500 new hotel rooms along Yanovski Street, just to the south of the Haas Promenade. A representative of Mayslits Kassif Architects has stated that the promenade is not now meeting its full potential: "Tourist buses only reach the vantage point because there is parking and access, standing on the fence and taking pictures, and the whole place is underused by pedestrians." A bridge connecting the Sherover Promenade to a light-rail line on nearby Hebron Street has also been identified as a future objective.

It is important to note that these new plans arise from political objectives and have moved forward without an intensive review, either by independent design professionals or the public. Moreover, several prominent landscape architects have registered their opposition to the project, maintaining that it would adversely impact the original design of the promenades, which are the work of two masters of Modernist landscape architecture. For while Halprin's designs were often known for activating landscapes for public enjoyment, they were equally careful in delineating appropriate spaces for given activities, including play. Speaking about his work on the Yosemite Falls Corridor in California, for example, he noted: "My palette there was to take people into the quality of Yosemite and to be able to walk through it and climb in it and not either touch it very hard or make fires in it, or make places for children to play, you know, even though children ought to be in it, but to make it the essential thing that it's not a playground."

Speaking to TCLF about the Haas promenade during an interview in December 2011, Shlomo Aronson remembered Halprin's special efforts "to not allow building on the crest [of the hill], so if you stand in the Old City and look south, you have this one [view] out of the four directions remaining free." And regarding his own work on the Sherover Promenade, Aronson recalled that the "first principal" of the design was to achieve "an element of calmness, of quiet, of less tension," which he further described as "the prevailing desire in everything we do." The collaboration between Halprin and Aronson represents a passing of the baton within the profession, from one generation to the next and from the United States to Israel. 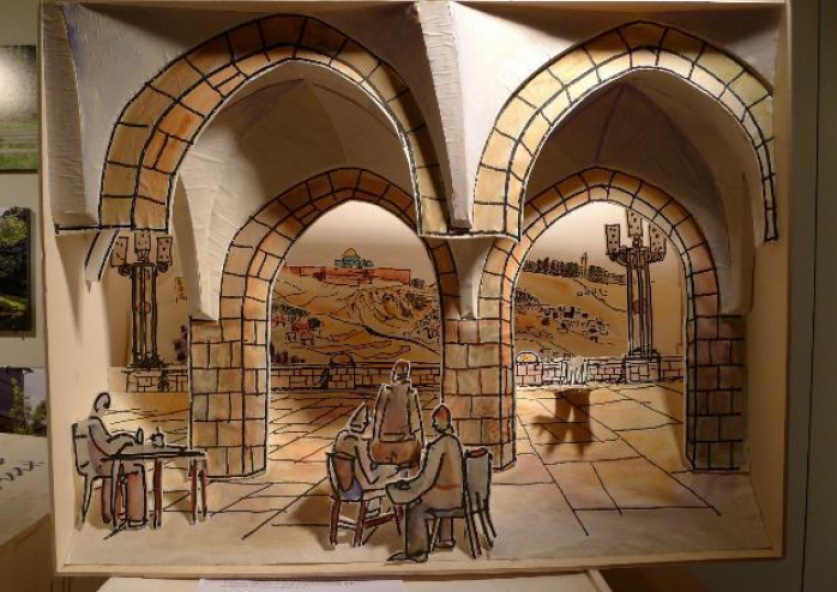 These matters aside, the new plans amount to a “Disneyfication” of a landscape masterfully conceived to provide the opportunity for the peaceful contemplation of history, culture, and nature—a landscape neither meant nor designed to absorb the addition of park-like features or venues, but rather meant to impart a measured, reflective experience of an unfolding historical narrative in a tranquil setting. That experience was achieved and expressed, in no small part, by the careful choice and use of materials intimately tied to the setting. The wooden decks, water features, and other elements now being proposed have no connection to the deeper meaning or history of the region, and they would forever reorient the landscape from an outward-looking, passive experience to an inward-looking, active environment. With regard to new buildings, its is worth remembering that the Haas Promenade already includes a café space originally designed by Halprin but now used more generically for private events. That space could be activated to serve its original purpose, making the construction of additional buildings unnecessary.

As further developments about the proposed interventions unfold, it is to be hoped that there will be ample opportunities for serious design review and public input before this significant part of Israel’s landscape legacy is diminished forever. 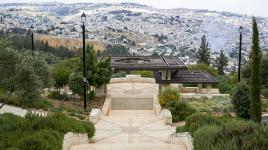 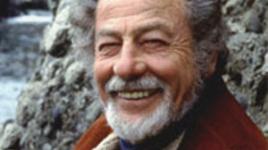 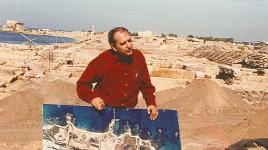