After an eight-month hiatus, the National Geographic Society has resurrected plans to remove MARABAR, the site-specific installation by New York-based artist Elyn Zimmerman located at the organization’s international headquarters in Washington, D.C. The artist has recently written that the installation is the "seminal work" in her career. In a new plan filed with the D.C. Historic Preservation Review Board (HPRB), in advance of a March 4, 2021 hearing, National Geographic is now proposing to move part of the installation to Canal Park, located in Washington, D.C. near the Navy Yard. However, National Geographic is once again withholding material the HPRB needs to make an informed decision.

As a reminder, on August 1, 2019, the HPRB approved National Geographic’s plaza renovation plans that would have resulted in the demolition of MARABAR. The Cultural Landscape Foundation (TCLF) examined the proposal submitted by National Geographic and its architect, Hickok Cole, and made the claim that the proposal had not been provided sufficient information about the artwork and the impact the proposed campus revitalization would have on MARABAR.  The “Existing Site Plan” (below) didn’t specifically label the artwork as it did other significant features. National Geographic’s attorney Carey Kadlecek, Goulston & Storrs, wrote that “NGS was forthcoming in its plans to remove MARABAR,” but he also wrote that “there was no need for NGS to specifically highlight the removal of Marabar beyond any other elements of the existing plaza.” Mr. Kadlecek’s assertion notwithstanding, the HPRB Chair noted the “issue of the sculpture was not raised” by National Geographic and Hickok Cole. Indeed, HPRB member Outerbridge Horsey stated that MARABAR “should have been brought to our attention” by National Geographic and Hickok Cole. 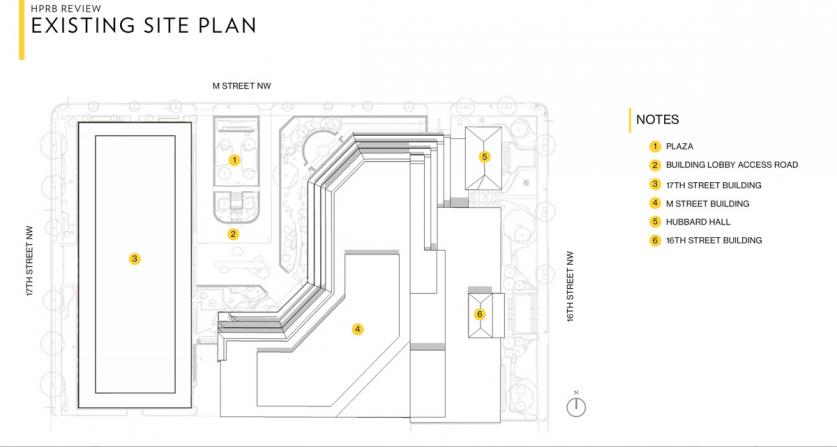 Existing site plan - 2019 - in which MARABAR is not labeled.

Despite this admonition at the May 28, 2020 meeting, National Geographic and Hickok Cole are still not being forthcoming with the HPRB. The current “Existing Site Plan” (below) does not show the complete installation. The entire artwork is composed of twelve mahogany-colored boulders and a rectangular water feature; however, the presentation by National Geographic and Hickok Cole only illustrates the water feature and the five immediately adjacent boulders. The seven addition boulders that are a contributing part of the processional arrival are absent from their presentation. 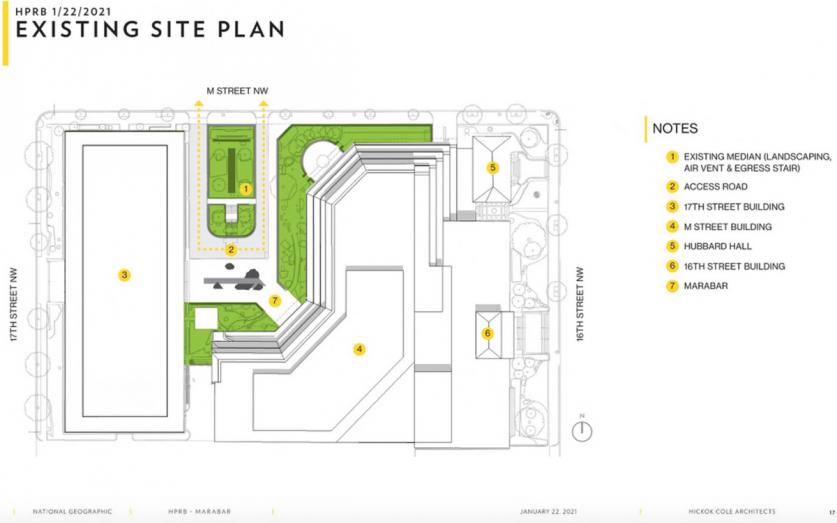 Existing site plan - 2021 - in which only part of MARABAR is labeled.

The entirety of MARABAR is shown in this illustration (below) supplied by the artist - all of the twelve boulders are highlighted in yellow. In it one sees the seven boulders that make up the processional arrival to the core of the sculpture; these seven boulders have been omitted from the latest proposal submitted by National Geographic and Hickok Cole. 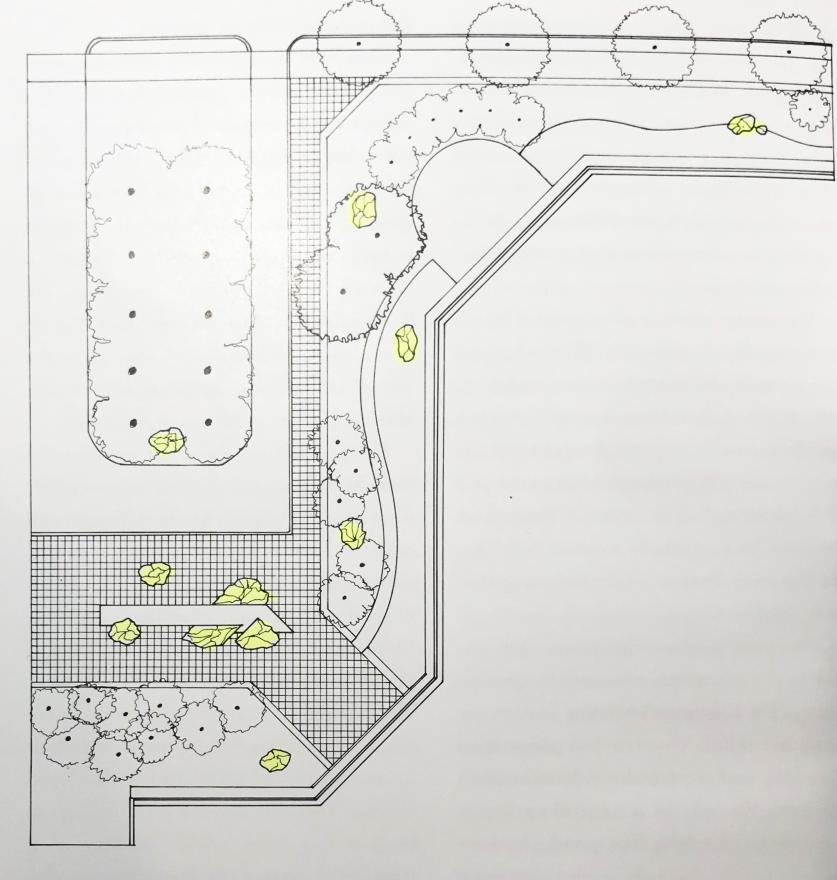 National Geographic and Hickok Cole also claim in their presentation that they have examined numerous options for relocating the installation on campus, but that none work. National Geographic’s president and chief operating officer, Michael Ulica, states in his January 22, 2021 letter of transmittal: “the Society exhaustively studied the potential inclusion of Marabar in the pavilion or relocating it elsewhere on our campus. Despite extensive analysis and efforts, we have determined that neither is feasible.” National Geographic’s outside counsel Mr. Kadlecek drew a similar conclusion.

Finally, National Geographic claims to have found a solution to the problem they’ve created. Move MARABAR to another location. Having exhausted options for retaining the work on its campus, National Geographic “spent seven months trying to find other locations,” according to the organization’s vice president and senior associate general counsel, Agnès Tabah in a February 10, 2021 meeting of a local Advisory Neighborhood Commission (ANC).  A portion of the artwork would be excavated and shipped to Canal Park in southeast D.C. (the fate of the remainder is unknown). In fact, National Geographic has executed a Memorandum of Understanding (MOU) with Canal, Park, Inc., the non-profit that manages the city park, for the transfer.

As with other aspects of National Geographic’s plans, the proposed relocation is flawed. First, MARABAR is a site-specific work and not something that can be moved from place to place. The logistics and engineering for moving the installation are complex; the three largest boulders alone weigh one-half million pounds. Moving the artwork could result in irreparable damage and no documentation has been provided to show that Canal Park, built with fill on the site of a former canal, would support the weight of the work.

Worst of all, National Geographic never consulted with the artist about possibly relocating the work. National Geographic officials contacted the artist to tell her of their intention to relocate the sculpture the day after the MOU was executed. When asked at the Feb. 10 ANC meeting if the artist had been consulted, National Geographic’s Ms. Tabah said: “Yes we have reached out to Elyn Zimmerman and we’ve had a couple of conversations with her and we are having a dialogue.” This is not a real dialogue because Ms. Zimmerman has never been consulted on how and whether MARABAR could be retained as part of the plaza renovation, nor was she asked about the appropriateness and desirability of Canal Park as a location for her site-specific installation. Once again, when it comes to the fate of the installation that Ms. Zimmerman calls the "seminal work" in her career, as of this writing National Geographic and Hickok Cole are not collaborating, they’re dictating. 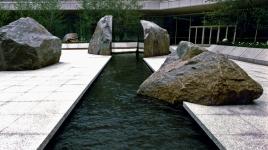 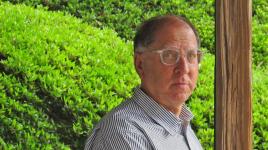