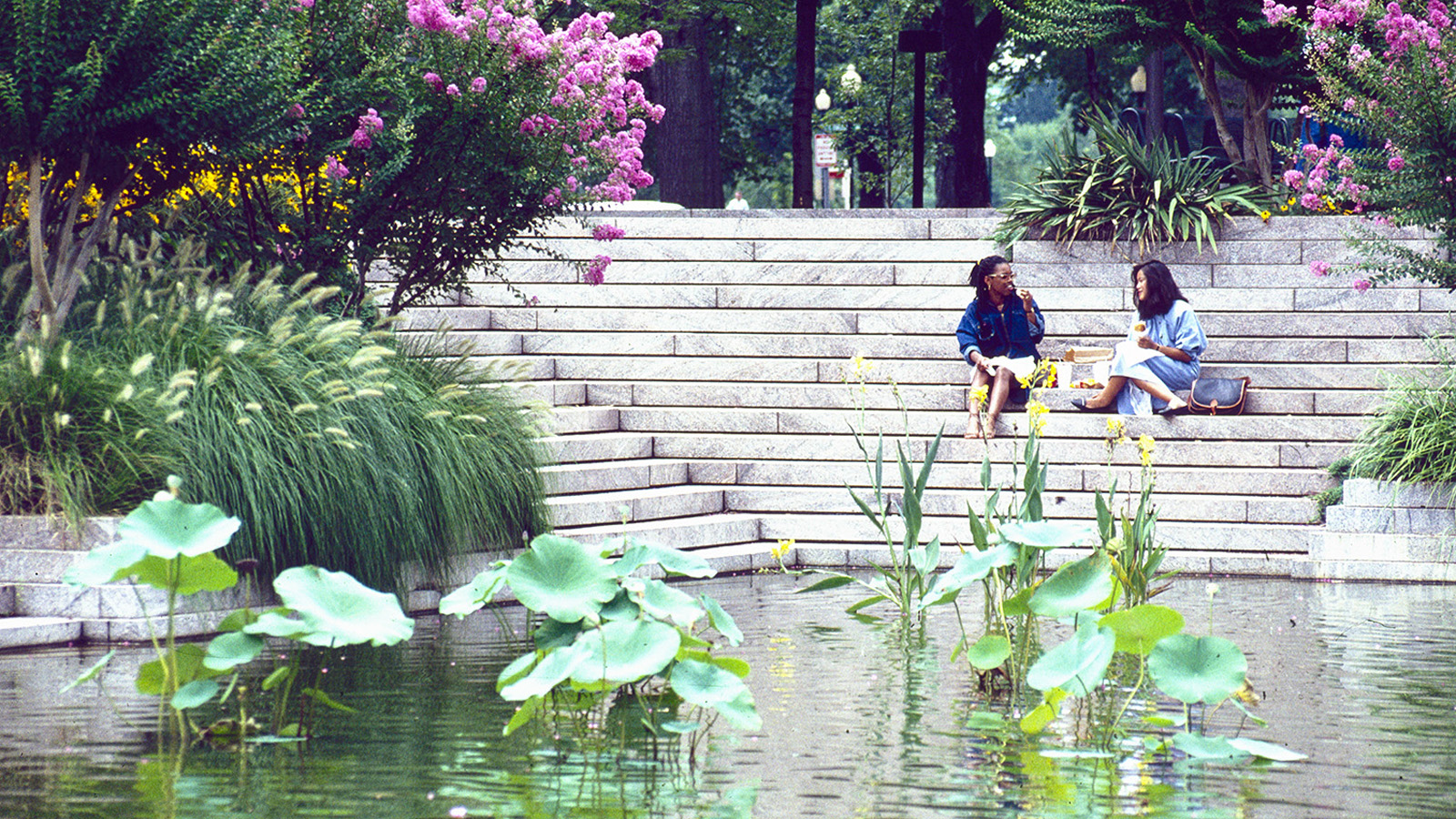 Located along Washington, D.C.’s Pennsylvania Avenue between the White House and the U.S. Capitol, Pershing Park, which opened in 1981, is among the most significant extant works by Modernist landscape architect M. Paul Friedberg. The project is also notable for the planting plan designed by the firm Oehme, van Sweden & Associates, and is a unique effort between these influential practitioners.  Degraded by accrued diminished maintenance, a World War I memorial has now been proposed for the site, and a vast majority of the more than 350 first-round submissions in the memorial design competition call for the present design’s complete demolition.

Pershing Park is at the western end of a 1.2-mile long stretch of Pennsylvania Avenue between Capitol Hill and the White House, a significant element of Pierre L’Enfant’s 1791 plan for the Federal City.  The avenue is the nation’s premiere ceremonial space, and a symbolic and physical link between the legislative, judicial and executive branches of government.  After more than a century-and-a-half of degradation, President John F. Kennedy established a council to revitalize the avenue, and following the council’s 1964 report, the Pennsylvania Avenue Development Corporation (PADC), created by an Act of Congress in 1972, commissioned leading landscape architects, including M. Paul Friedberg, to design significant improvements along its expanse.  Importantly, while this stretch of Pennsylvania Avenue is designated as a National Historic Site, the “period of significance” (1791-1962), which the National Park Service defines as the finite “span of time during which significant events and activities occurred,” does not include some of the PADC-era commissions, which will be addressed below. 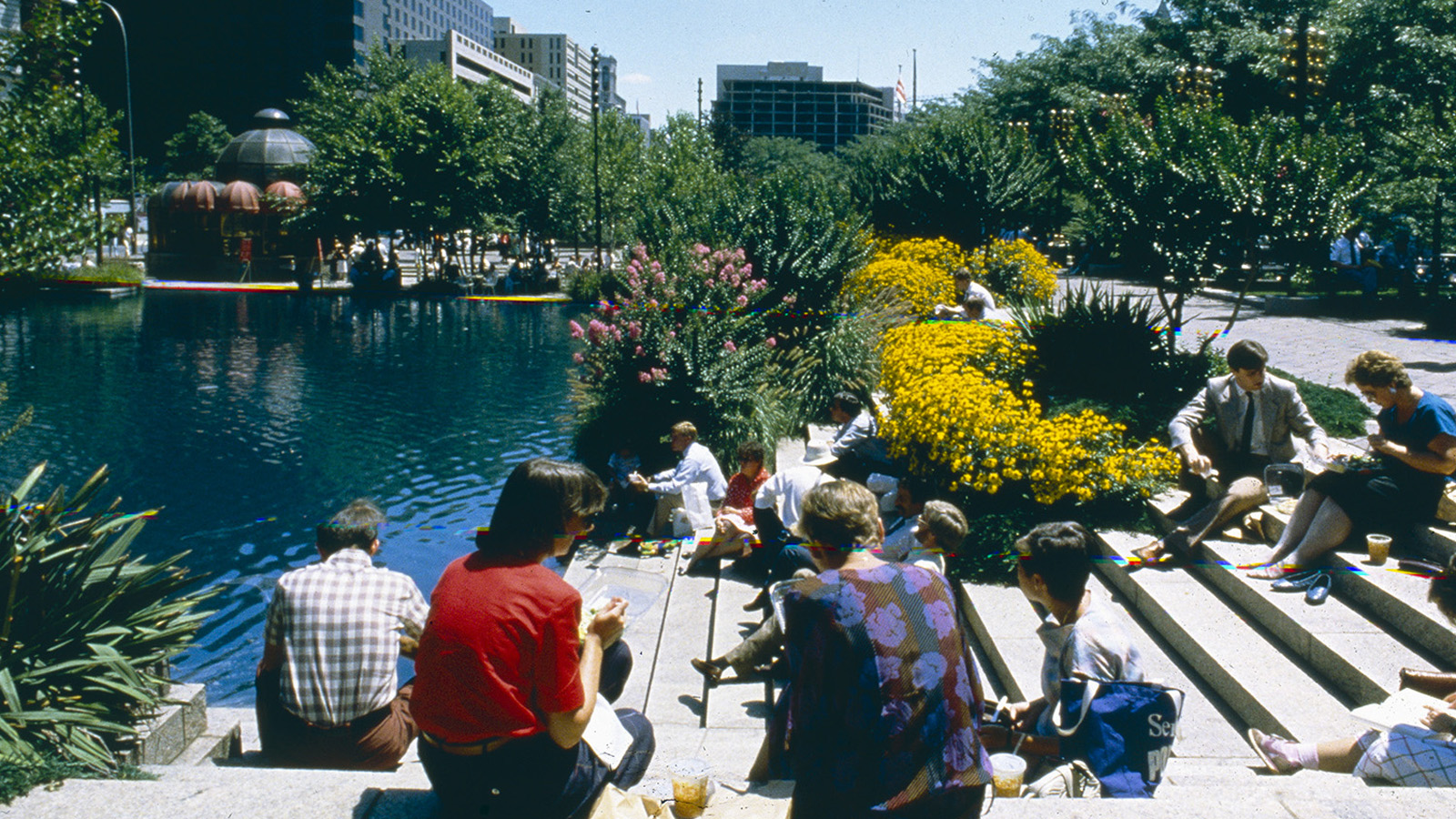 New York-based Friedberg, the subject of a Pioneers Oral History, is one of the nation’s leading Modernist landscape architects, whose extant oeuvre includes Peavey Plaza in Minneapolis, MN, which opened in 1975 and is listed in the National Register of Historic Places (2013), and the Winter Garden at Battery Park City’s World Financial Center in New York City. Friedberg’s career, which stretches more than a half century, is peppered with influential projects and he is a rare recipient of the two highest awards of the American Society of Landscape Architects (ASLA), the association that represents the profession – the Design Medal (2004) and the ASLA Medal (2015) – only six practitioners have been so honored in ASLA’s 116-year history.

The park Friedberg designed honors General John J. Pershing, commander of the American Expeditionary Forces in World War I, and the troops he commanded.  Opened in 1981, the 1.8-acre multi-level plaza contains several elements—the sunken plaza/pool basin, the amphitheater-style seating, and the lawn terraces—also evident at Peavey Plaza. However, the planting plan, executed the same year, was by the Washington, D.C.-based Oehme, van Sweden & Associates, which created a lush water garden.   Wolfgang Oehme and James van Sweden are recognized as the creators of a typology—the  “New American Garden”—that has influenced practitioners nationwide, and can be found in Washington, D.C. at the Federal Reserve Board, the World War II Memorial, and the German-American Friendship Garden (Oehme, van Sweden will also be the subject of a monographic traveling photographic exhibition being organized by TCLF in collaboration with the National Building Museum in Washington, D.C., where it will open in October 2015). Pershing Park was among the first uses of this planting design concept in a civic space, and the project is a unique effort between Friedberg and Oehme, van Sweden.

The PADC was terminated in 1996 and many of the public improvements that it initiated have fallen into disrepair in the intervening two decades due to diminished maintenance by the National Park Service, which has responsibility for the site (collectively, this section of Pennsylvania Avenue – and body of work commissioned by the PADC – was included in TCLF’s 2012 Landslide: Landscape and Patronage thematic compendium of nationally significant at-risk and threatened landscapes).  The situation at Pershing is particularly noticeable.  For several years, the signature expansive, but shallow, pool—essential to the “water garden” idea and also used as a skating rink in the winter—has been empty and at times garbage strewn.  Paving materials and other hardscape elements are in need of repair, plant materials have been neglected, and even the original movable metal chairs and tables have been replaced with immovable concrete furnishings. 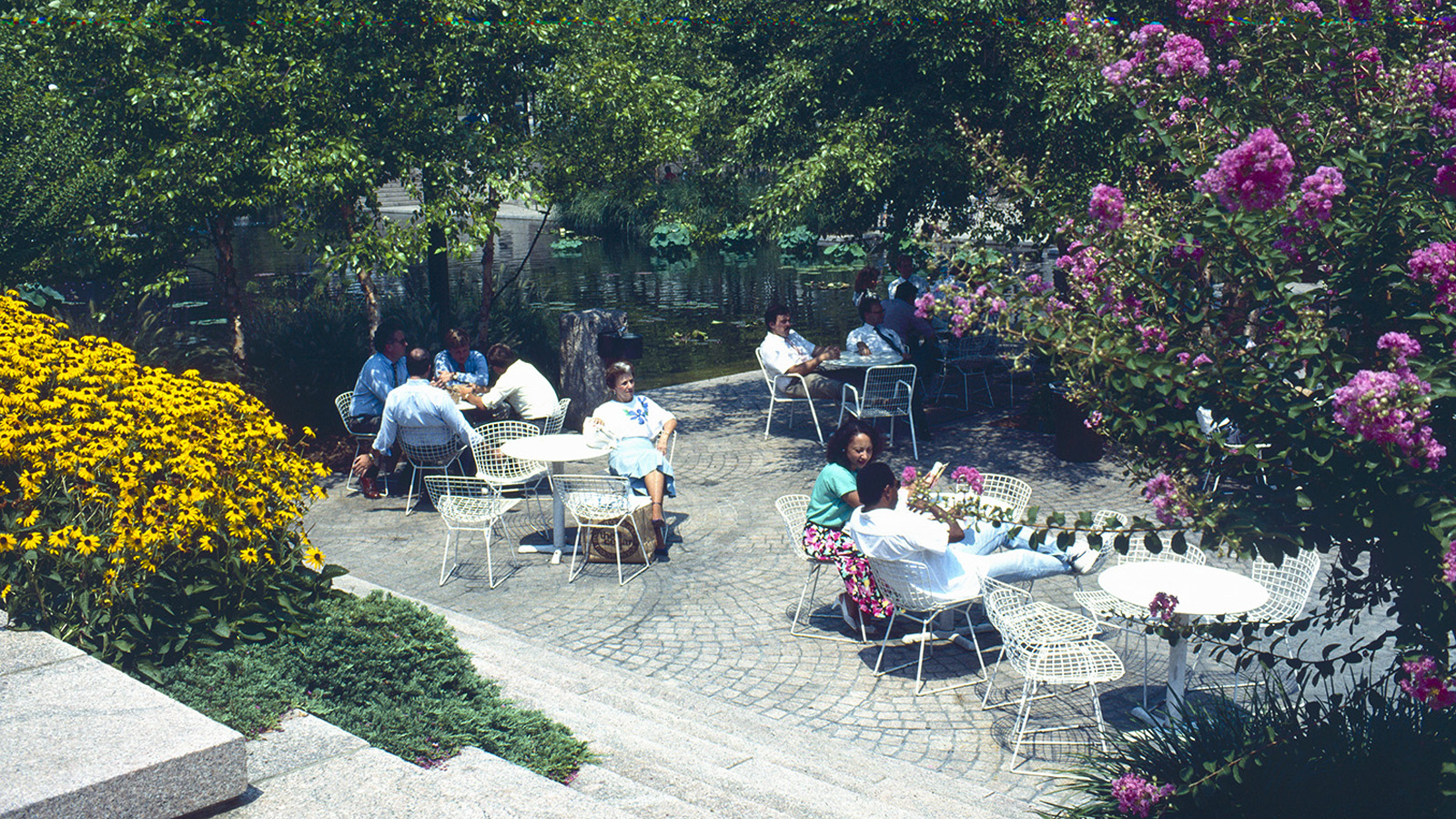 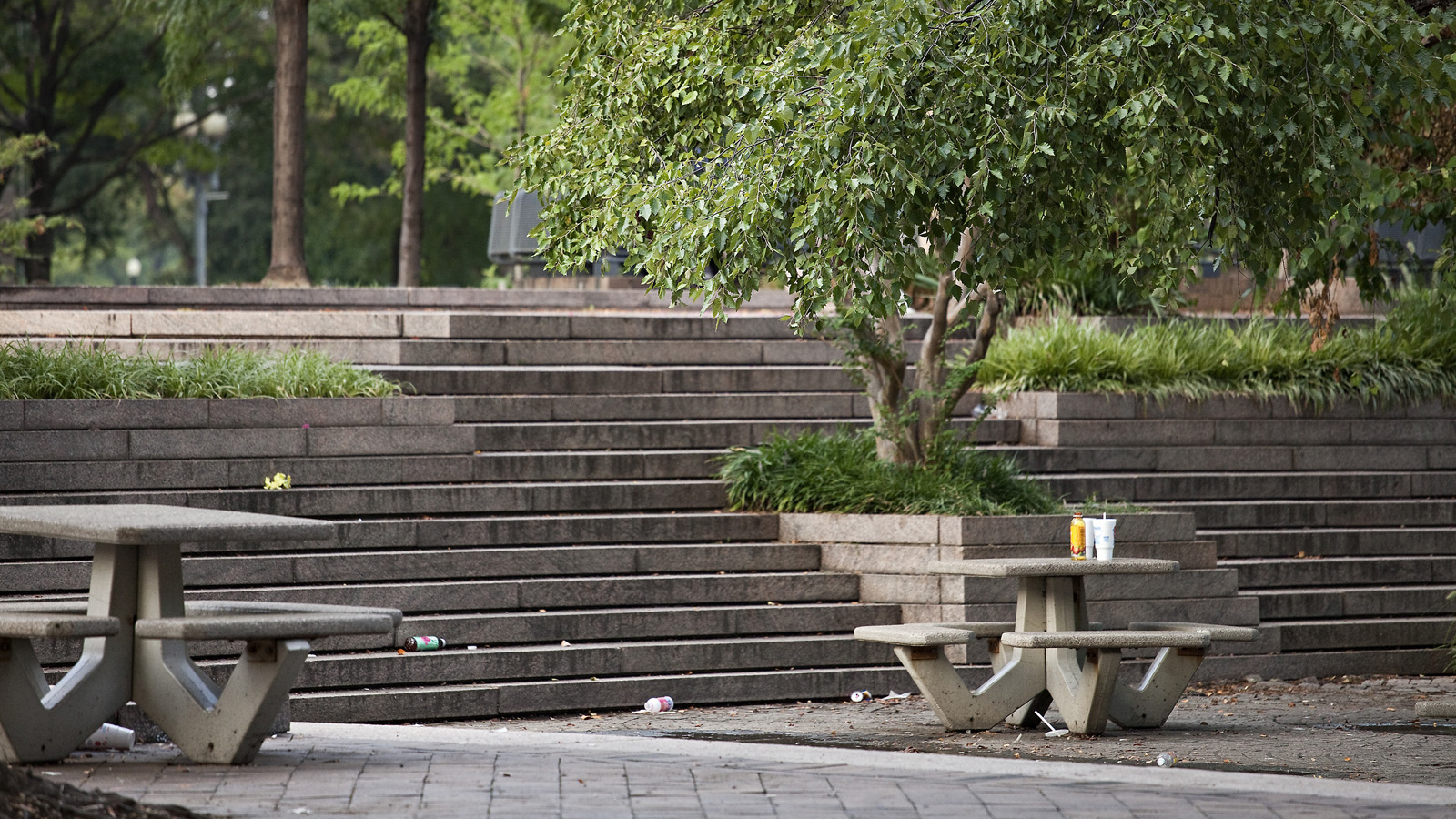 In January 2001, work began on the National Register Nomination update that lead to the creation of the Pennsylvania Avenue National Historic Site, designated in 2007.  As noted above, some of the PADC-era commissions were not included because only twenty years had elapsed since the park first opened, and their respective designers were still in practice. Since then, Friedberg has retired and both Wolfgang Oehme and James van Sweden (the latter also the subject of a Pioneers Oral History) have passed away.

We believe the site is eligible for listing on the National Register of Historic Places and that the National Register Nomination should be revisited to consider the inclusion of Pershing Park and other PADC-era commissions – thus insuring that any proposed changes would not have an adverse effect on the park’s signature design elements and features.

As is the case with parks across the country, diminished maintenance has resulted in palpable structural problems and deficiencies at Pershing Park, and this is not the first of Friedberg’s works to so be afflicted (in recent years, Peavey Plaza was threatened with demolition, but that has been averted for now).   Currently, there is a more substantial threat: the U.S. World War I Centennial Commission, established in 2013, announced a design competition to redevelop the park as a National World War I Memorial.  The competition language discusses any proposed design interventions in terms that seem benign, “appropriate enhancement strategies” and “transformation options,” but the proposed $20-25 million budget points to wholesale changes, which a recent Huffington Post article noted is a budget consistent with "the demolition of the exiting landscape and the construction of a new work."  The Commission created an open design competition and by July 15, 2015 had received a first round of proposals.  Significantly, nearly all of the more than 350 options call for the complete demolition of this unique effort by Friedberg and Oehme, van Sweden.  A jury currently sits in review of these entries and will choose those who will enter the second round of competition.

We believe this current focus on Pershing Park could be the impetus for the park’s renewal and the development of an ongoing management plan that includes a public/private conservancy (similar to the Battery Park Conservancy).  Recent archival images demonstrate that Pershing was extremely popular with downtown workers along with visiting tourists and it could again become that oasis on Pennsylvania Avenue.
Because of the significance of the site, both nationally and within Friedberg’s career, any alteration and/or demolition of Pershing Park would require consultation with and approval of several organizations including the National Park Service, the National Capital Planning Commission, and the U.S. Commission of Fine Arts. 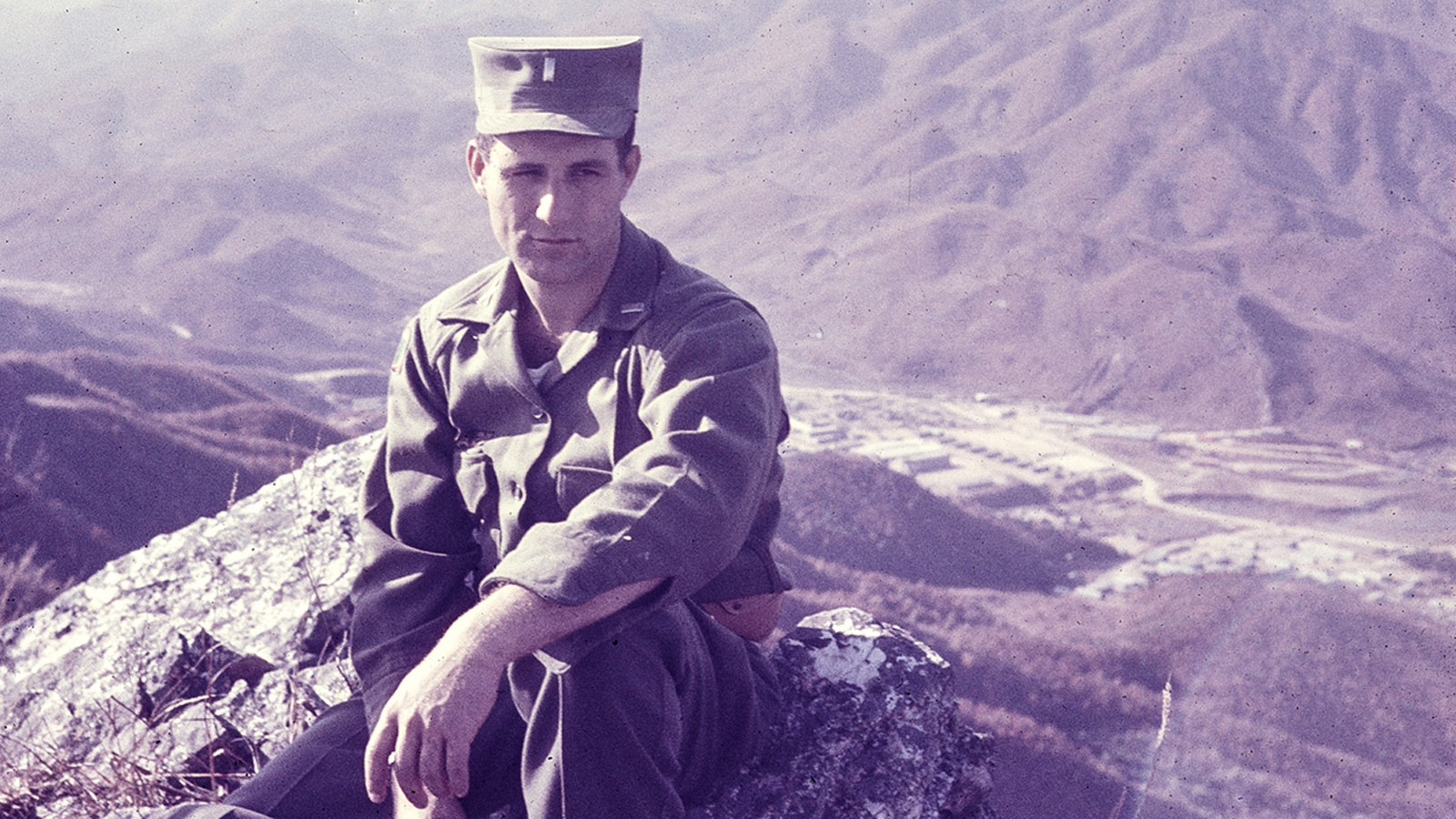 It is important to note that Pershing Park’s inclusion in Landslide is not a commentary by either TCLF or Mr. Friedberg on the need for or appropriateness of a national World War I memorial, the people it would honor, or the sincere intent of the Commission and its supporters.  In fact, Friedberg served in the U.S. Army and was stationed in Korea, as he discusses in TCLF’s Pioneers Oral History.

Contact Karen Cucurullo, Acting Superintendent, National Mall and Memorial Parks at the National Park Service and urge for better maintenance of Pershing Park and the nation’s most important processional space. In addition, the Park Service should explore an expansion of the period of significance for the avenue to include the PADC’s contributions—especially the Modernist parks created by M. Paul Friedberg and other nationally significant landscape architects during its tenure, in all future planning and development initiatives:

Contact the World War I Memorial Commissioners including the Chair, Colonel Robert J. Dalessandro, and Vice Chair, Edwin L. Fountain, and urge that any proposed changes to Pershing Park not have an adverse effect on the park’s signature design elements and features: 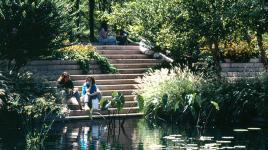