In recent years, there have been a growing number of gardens created for children.

From the prominent White House Garden, to gardens affiliated with schools, such as Alice Water’s Edible Schoolyard in Berkeley, to more neighborhood-based initiatives such as the Red Hook Community Farm in Brooklyn, children’s gardens are being created to promote healthy nutrition and environmental stewardship, and provide a more interactive educational environment. They reflect widespread concerns about children’s health—particularly the growth of childhood obesity—and of consequences of our society’s growing disassociation with the natural world. These gardens can been seen as an outgrowth of the community gardening movement which began in the 1960s, and is still going strong in many cities. However, the particular concerns about children, and the awareness that gardening can provide them with a range of educational, recreational, and health benefits, have roots in an earlier and less known period in urban gardening history.

The school gardening movement was a nationwide initiative to create gardens for children, peaking between 1900 and 1920. The movement integrated many aspects of Progressive Era urban reform, including theories of progressive education, the approach and practice of settlement workers, and the efforts to transform the urban environment that included tenement house reform, the small parks movement, and the City Beautiful movement. They were directly influenced by an educational movement called “nature-study” which advocated the study of the natural world, the growth of children’s gardening programs in Europe and the development of the modern playground. It unfolded in cities across the country, including Berkeley, Boston, Dayton, New York, Philadelphia and Chicago, where school gardens were created in some of the Jens Jensen designed parks. In 1906, there were over 75,000 of these gardens across the country, created primarily in urban schoolyards, but also in parks, vacant lots, and backyards. 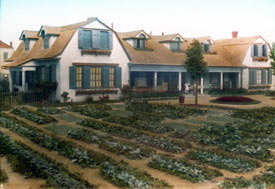 McCarren Park Farm House, Department of Parks Drawings
Collection, New York City Municipal ArchivesOne of the leaders of the school gardening movement was Frances (Fannie) Griscom Parsons (1850-1923), who created the first such garden for children in New York City, and helped invent a profession of school garden advocacy. In 1902, she created the “Children’s School Farm” on a plot of land on the west side of Manhattan that had been slated to become public parkland, but had sat unimproved while funds were being acquired for its development. The neighborhood was so notorious for squalor, disease, and vice that it had earned the name “Hell’s Kitchen.” The farm provided neighborhood children with individual plots, where they were instructed in growing vegetables. They were also responsible for maintaining the communal and more ornamental areas of the farm. In the farm’s second year a small farmhouse was built in which girls were instructed in household tasks. The entire scene contrasted dramatically with its setting. Surrounding the garden were warehouses, factories, slaughterhouses and tenements, and congested streets. Along Tenth Avenue, which bordered the farm, the Hudson River Railroad—largely responsible for the rapid industrial development of the area—barreled through the neighborhood, leading to the streets nickname: “Death Avenue.” The west side of the farm looked out over docks and shipyards along the Hudson River and the highlands beyond. 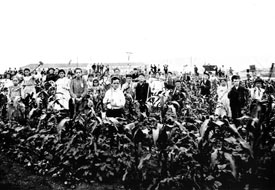 Farmers at the Children’s School Farm, 1902. Collection of the
New York City Parks Photo ArchiveParsons created the garden to counteract the slum conditions of Hell’s Kitchen—to provide an open space and experience of nature that was so glaringly absent from the neighborhood. However, she emphasized that she did not start the farm “simply to grow a few vegetables and flowers.” Parsons believed that gardening would teach children values and skills that would be applicable to their lives in the city, specifically, “brotherhood, cooperation, self-respect, and the dignity of labor.” By “playing the part of little farmers,” as Parsons described it, the children would become urban citizens. (This was particularly essential as many of them were children of immigrants or immigrants themselves). Indicative of this approach to gardening was the fact that little was mentioned about what happened to the vegetables—the project was about process, not product. The farm—which had a deep resonance in the American imagination—was the site of Parson’s vision of an idealized city, and this was even manifested in its design. The children elected a government to run the farm, its acreage was divided into four “boroughs,” and the main path named “Broadway.” 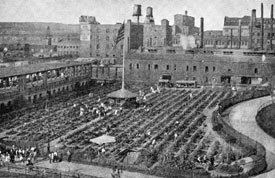 Children’s School Farm, 1910, from Henry Parsons, Children's
Gardens for Health Pleasure and Education, 1910
Parsons had no professional experience in gardening or landscape design. She was influenced by the climate of reform at the turn of the twentieth century, but her inspiration had personal roots. Her father, John Hopkins Griscom (1809-1874), was a physician and one of the founding members of the New York City Board of Health. A leader in public health reform, he was one of the first to attribute environmental conditions—overcrowded tenements, poor sanitation, and lack of recreational conditions to the high mortality rates, unemployment, and low morale in slum neighborhoods. Her grandfather, John Griscom (1774-1852) was also a noted social reformer and one of the founding members of the New York House of Refuge for Juvenile Delinquents, the first children’s reformatory in the city.

She presented her work as part of a family legacy of reform, and also as an outgrowth of her experiences as a mother. She had seven children whom she raised in Brooklyn, before escaping the city to upstate New York. In the country her children gardened and played outside, activities that she believed contributed to a comprehensive and wholesome child development. When she began working in Hell’s Kitchen she declared, “I simply went out to live with the thousands, as I had lived with my own seven, believing that the thousands had the same traits and are amenable to the same influences.” Her approach was allied to that of other visionary women, known as municipal housekeepers for the way they reinvented domestic roles into professions that involved transforming the city and caring for its children. 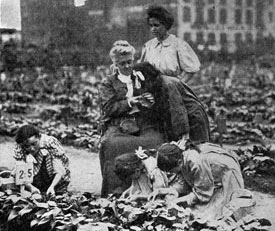 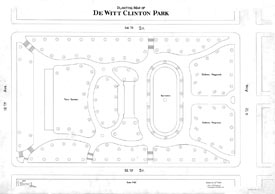 (upper) Portrait of Fannie Griscom Parsons. Photograph by
Brown Brothers. From Henry Parsons, Children's Gardens,
1910; (lower) Samuel Parsons Jr., Plan of De Witt Clinton Park,
1905. Department of Parks Drawings Collection, New York
City Municipal ArchivesFor three years, Parsons considered the farm a temporary experiment. It was created with private funding and on land borrowed from the Department of Parks which was slated for a new public park. The Department viewed it as a great success and when they opened De Witt Clinton Park in 1905, they created a permanent farm and hired Parsons to manage it. The park was designed by Samuel Parsons Jr. (no relation to Fannie) who had recently designed Seward Park, which included the first municipally funded playground in New York City. His work at Seward, De Witt Clinton, and the other small parks represented a new era in park design, characterized in part by the challenge of integrating facilities such as playgrounds, bathhouses, and school farms with conceptions of parks as landscaped, open spaces.

Building on this success, Fannie Parsons, who had always been a great promoter of her work, began working harder to spread the school garden idea, giving lectures, creating exhibitions, and training teachers. As Parsons emerged as a leading advocate, the Children’s School Farm became nationally recognized as a model for others, particularly as a large garden in a dense urban area. Her son Henry became involved in this aspect of the work and wrote Children’s Gardens for Health, Pleasure, and Education (1910), widely considered an important resource on school gardening. In 1910 the Department of Parks appointed Fannie Parsons the director of the newly created Bureau of School Farms, making her the first woman to hold a high level position in the department. In this capacity, she created new farms in Thomas Jefferson Park, Corlears Hook Park, Seward Park, and Isham Park in Manhattan, and in McCarren Park, Betsy Head Park, and Highland Park in Brooklyn. 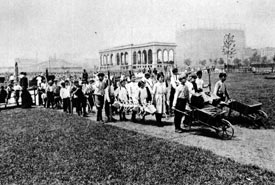 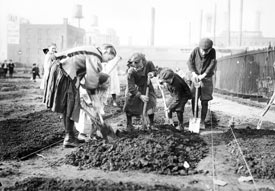 (upper) School farm in Thomas Jefferson Park, 1910. Collection
of the New York City Parks Photo Archive; (lower) Boys and girls
preparing the ground for planting, Children’s School Farm.
Collection of the Library of Congress, Print & Photographs
Division
As the school gardening movement reached its peak in the mid 1910s, with the federal government providing financial support to create gardens in cities nationwide, its focus shifted to address the crisis of World War I. Building on the existing interest and resources, the government began promoting gardening as a way to supplement local food production and inspire patriotism. Both Henry and Fannie Parsons became involved in this new phase of the movement, which had expanded beyond the focus on children. After the war, interest and support waned. Parsons died in 1923 and Henry and others she had trained continued the work in New York City parks, where many of the gardens existed into the 1950s. In 1932, the city destroyed the Children’s School Farm to expand Twelfth Avenue and construct the Miller Elevated Highway.

The work of Fannie Parsons can provide a context for the current resurgence in children’s gardens. It also offers new insight into this period in American history. The Children’s School Farm was a manifestation of the country’s shift from an agrarian to urban society and of the important role that woman and children played in shaping public spaces, particularly neighborhood parks, in New York City and elsewhere.